Senior Project: Performance-Firm’s Patriarch Follows a 10-Year Plan to a ’06 Dodge Ram 3500 that Can Do Anything 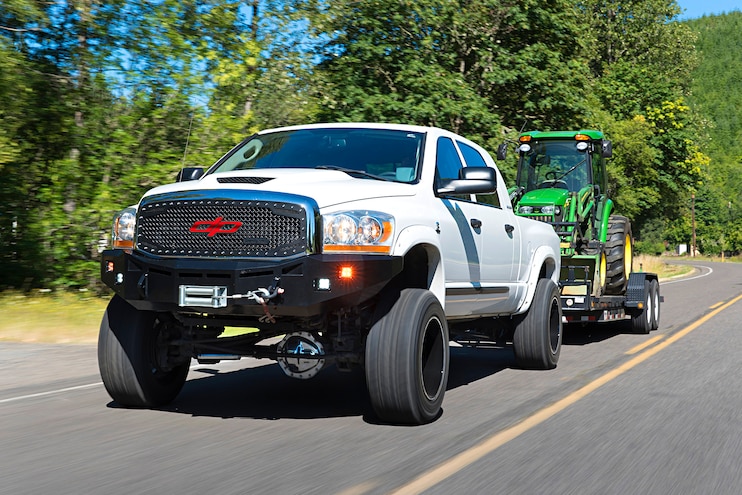 Mike Dunks Sr’s. tow rig/work truck is a sharp-looking, white ’06 Dodge Ram 3500 that runs every bit as good as it looks, thanks to the very healthy, 600 hp 5.9L Cummins engine beneath its hood.
Several times a month “Senior,” as he’s known by many, hooks up a trailer loaded with his street-strip Camaro to compete alongside his two sons, Mike Jr. and Eric, at Woodburn, Oregon’s NHRA-sanctioned dragstrip. Senior is also known for rolling his big rig to the line and making a pass or two in it as well, with the 8,000-pound beast clipping off very respectable 13.40-second elapsed times at 101 mph.
Senior says he’s always had a great affection for high-performance vehicles and his Mega Cab Dodge Ram is no exception. “The majority of changes to my truck over the last 10 years were done to make it a better-performing tow rig and work truck,” he says. “I try to keep its looks and performance current with the times. So, this is a revolving build that’s seen several iterations.” 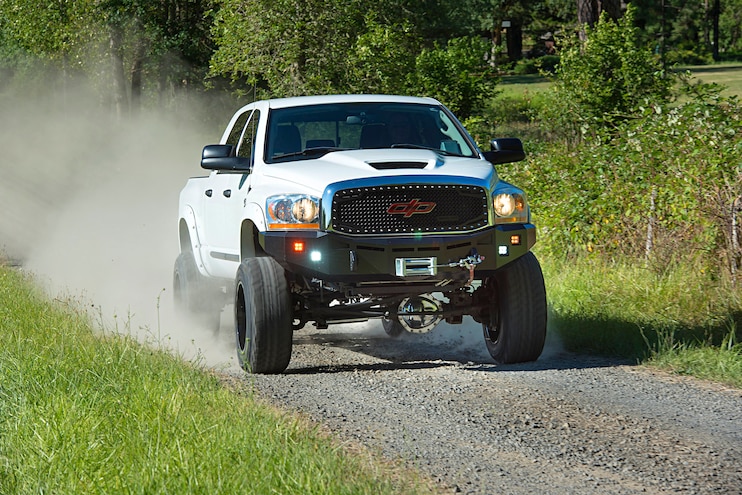 View Photo Gallery | 12 Photos
Photo 3/12   |   A custom Royalty Core grille, Fusion heavy-duty winch bumper (with a 12,000-pound-capacity Warn industries winch), and Rigid LED lights set off the front of Mike Dunk Sr’s work truck.
Dependable Tow Mods
For example, exhaust from the truck’s the 5.9L Cummins spins an Industrial Injection PhatShaft 64 turbocharger (with the 14cm housing to maximize the mid-range towing power) while Dynomite Diesel Products’ stump-pulling 90-hp injectors boost the fuel.
The other engine modifications include an O--ringed cylinder head, ATS Diesel Performance Pulse Flow exhaust manifold, an “old-school” Piaggio APE air-intake setup with Snow Performance water-methanol injection, and an S&B filter system, all mild but dependable changes. Senior also added a 5-inch stainless-steel Magnaflow exhaust. Senior dialed in towing and track performance with an Edge Products Juice with Attitude programmer and companion CTSmonitor.
The early weak link was the truck’s 48RE four-speed automatic transmission. Senior took care of its issues by having Cordray’s Performance Transmission in Albany, Oregon, rebuild it from the inside out with Goerend Transmission components, including the valve body and torque converter.
He hasn’t touched the stock driveshafts and rear limited-slip differential. However, the 3.73 gears have been swapped out for 4.10s to compensate for the 35-inch Toyo Open Country M/T tires that do their best to rotate the Earth under the 24-valve Cummins’ torque. 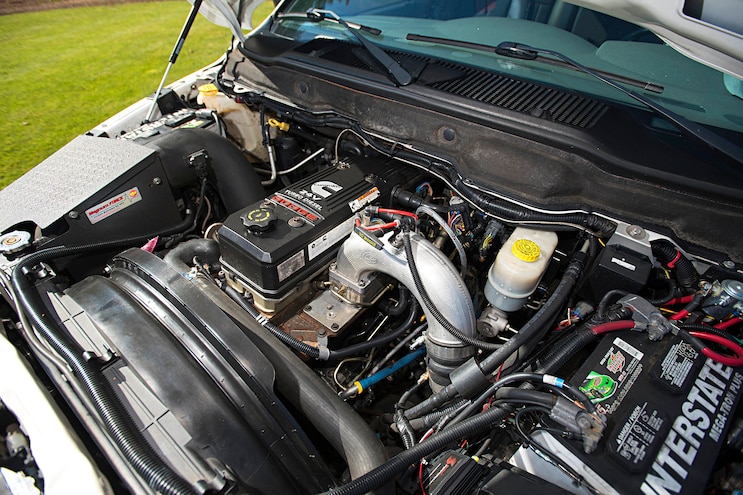 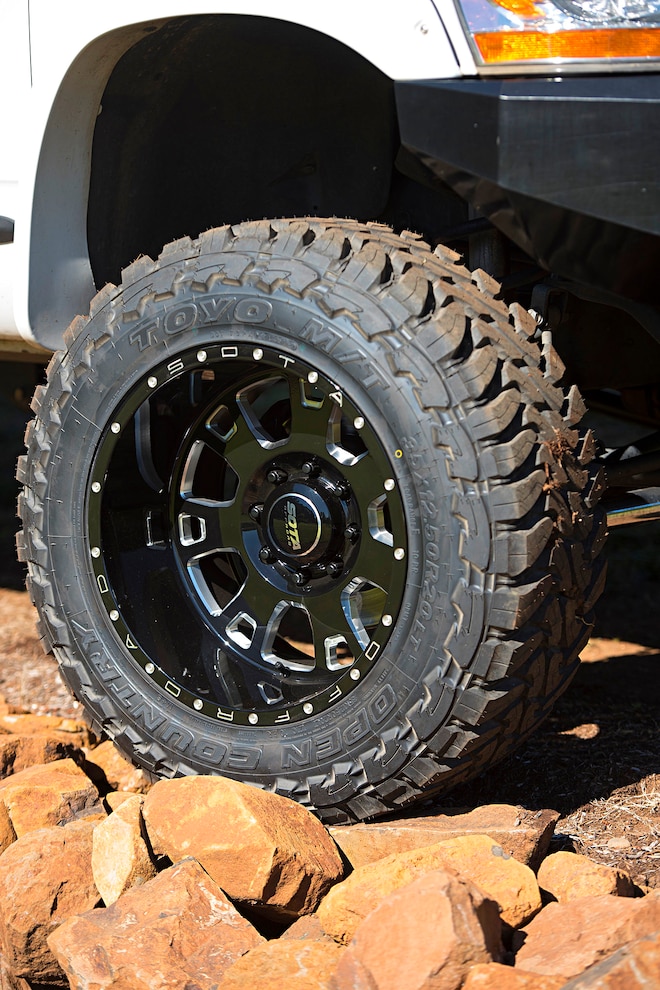 View Photo Gallery | 12 Photos
Photo 5/12   |   The only really “trendy” item on Mike’s Dodge Ram 3500 is the set of 20-inch SOTA Death Metal Brawl offroad wheels. Toyo’s 12.50x20 M/T tires are his go-to work treads.
Flash in the Right Places
The exterior and suspension on Senior’s ’06 Dodge Ram 3500 are areas that initially catch onlookers’ attention. The black-and-white 4x4 rides atop a 6-inch BDS Suspension long-travel front setup that’s enhanced with Epiq Suspension’s upper control arms and RadFlo Suspension Technology 2.5-inch remote-reservoir shocks. The rear suspension also uses 2.5-inch RadFlo shocks, stock springs sitting on 4-inch blocks, and Epiq’s adjustable traction bars.
When Senior’s rig inadvertently occupied the same highway space as another rig and suffered some damage, he replaced the factory hood with one from an SRT-10 to give his truck a meaner look. The new hood, custom grille from Royalty Core, Bushwaker pocket flares, and black powder-coated Fusion bumpers really set this Dodge apart from the typical work truck.
He has also added Rigid LED lights at both ends and a 12,000-pound-capacity Warn Industries winch tucked behind the front bumper to provide more functionality around the ranch and out on the road. 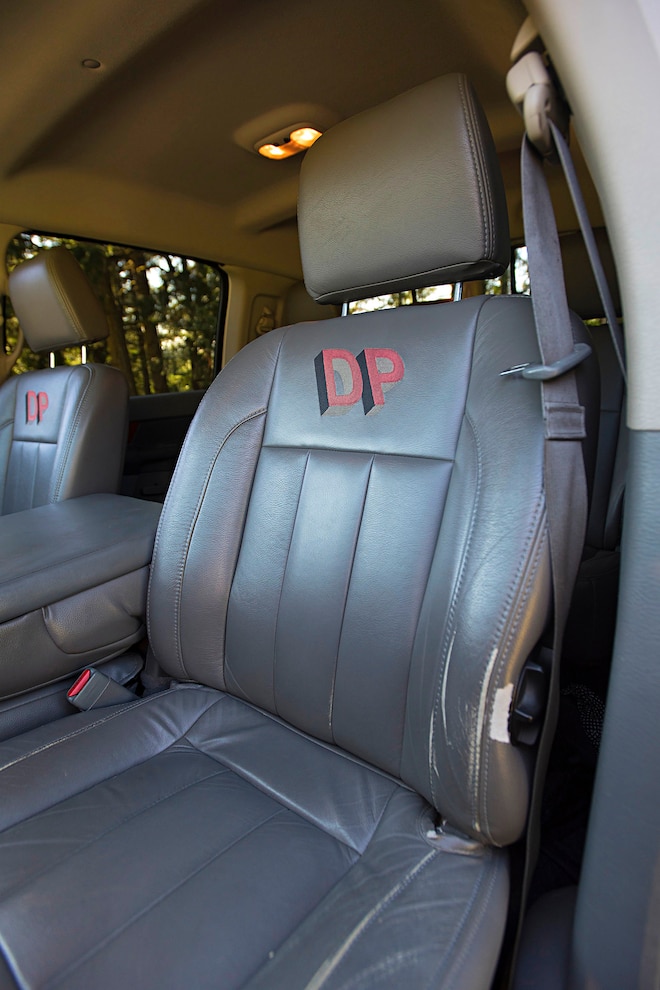 View Photo Gallery | 12 Photos
Photo 6/12   |   Inside the cabin, Katzkin seat covers have worn well over the years. They are the only custom touch on the Ram Mega Cab’s interior.
The mid-level interior trim is typical of the cabin you’d find in a tow rig or a truck that works around a jobsite, ranch, or farm. It’s clean, comfortable and tidy, showing just a little wear after a decade of daily use. The only custom touches are the grey Katzkin-leather-covered bucket seats with Dunks Performance’s “DP” embroidered on the seatbacks.
“This is my work truck,” Mike Sr. says. “It has worked flawlessly,towing my dump trailer, tractor, excavator, and race car. I’m pleased with how she runs and handles. But, I think it’s time to put one of the new BDS progressive-rate, long-arm suspensions under it and add air bags. I’m also thinking, ‘compound turbos.’”
It’s definitely a sure sign that as time goes on, Mike’s ’06 Dodge Ram 3500 will continue evolving. 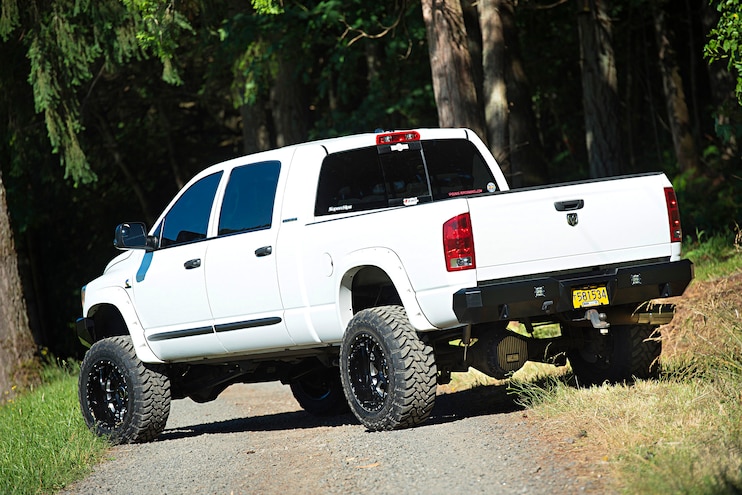