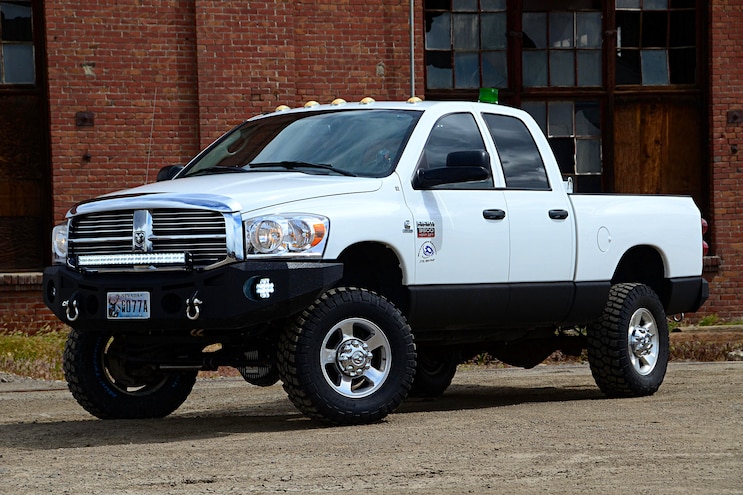 While Nevada is known for a lot of different things, such as gambling, cowboys, and Area 51, mining is a major industry of the Silver State, as it’s one of the largest sources of gold and silver in the world. Terry Fagg’s ’07 Dodge Ram 3500 is a regular at various mining sites, since he does repairs and maintenance on heavy equipment. But this work puts some serious demands on his pickup. Handling them required adding some specialized modifications to make sure it holds up in the harsh terrain (along with the green light on the cab roof, which we’ll explain shortly for those not familiar with mining sites).
Getting sufficient clearance is one big issue, as mining roads are often barely more than rocky trails. So Terry’s rig has a Carli Suspension front end upgrade kit that replaces OEM wear items with lifetime parts. These consist of extreme-duty ball joints, an adjustable track bar with polyurethane bushings, and a stainless steel low-mount steering stabilizer. This setup minimizes play in the steering, since tracking straight and true and having improved steering response and tightness are a must on mountain roads with steep drop-offs. Fox shocks at all four corners damp jounce on rough roads.
Even more important for work duty was beefing up the drivetrain to handle towing and hauling a variety of parts and tools required for servicing mining equipment. Terry basically told Tim Anderson of T&A Performance to do whatever was needed to handle this sort of industrial duty. “We don’t care about horsepower. We went for max torque, driveability, and low smoke,” Tim says. “The turbo is an ATS 3000/5000 compound unit for a ’07 5.9L converted to use on a 6.7L Cummins. The 3000 lights first, which then gets wastegated, and the 5000 takes over for the top end.” 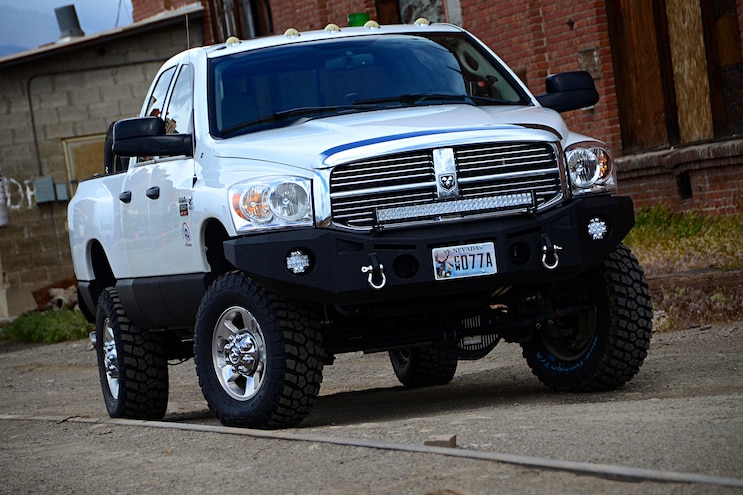 View Photo Gallery | 29 Photos
Photo 2/29   |   2007 Dodge Ram 2500 Front Quarter View
While the output runs up to about 700 horses, the torque number is far more important to Terry’s needs. Tim says de-lipping and fly-cutting allows the engine to hold more boost (50 to 60 pounds, versus 25 to 30 stock). The 6.7L block was bored out some .020 inches over, and a ceramic dry-film coating on the side skirts reduces friction. BD Diesel Performance supplied a 6.7L X-intake elbow with a grid-heater delete. Combined with a Hamilton street/race cam and valvesprings with flat tappets, plus an ATS intake and exhaust manifold and an ATP tuner, the torque dials up in excess of 1,300 lb-ft.
That’s enough power on tap to haul just about anything Terry wants to throw in the cargo bed or his flatbed trailer. A Prodigy brake controller keeps his trailer stable on sudden stops, and a Mishimoto radiator ensures this mill runs at proper operating temps.
For extra range in the remote mining camps of northern Nevada, Terry added a 200-gallon tank in the cargo bed. But given the rugged terrain he encounters, all that agitation can cause air and vapor to get into the fuel. Like water, fuel contains a certain amount of dissolved air depending on the fuel temperature, pressure on the fuel, and the amount of aeration (sloshing) of the fuel. Even though the air isn’t visible, No. 2 diesel can contain as much as 10 percent air, which robs performance. 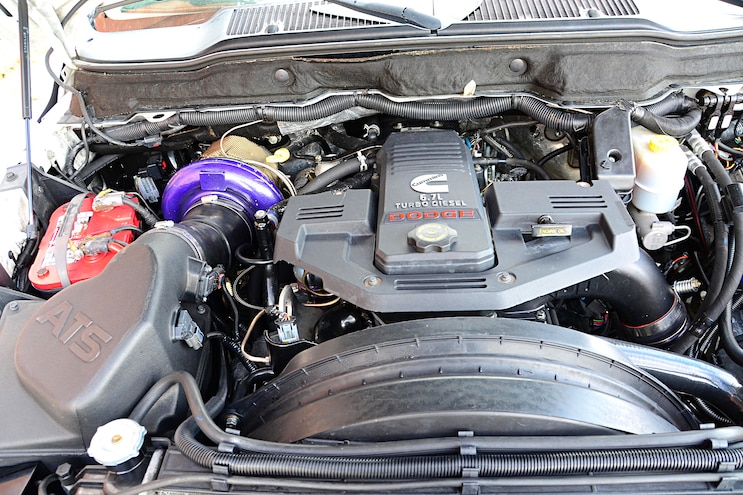 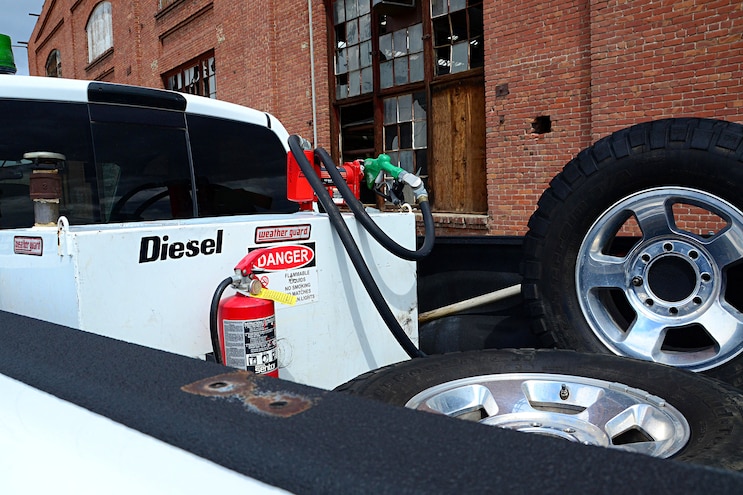 View Photo Gallery | 29 Photos
Photo 4/29   |   2007 Dodge Ram 2500 Wheels In Bed
To reduce that percentage, T&A installed a FASS (Fuel Air Separation System) that removes various contaminants, especially water. Another reason for the FASS is that fact that Terry’s Dodge runs at much higher boost than factory, resulting in a leaner air/fuel mixture unless there’s a corresponding increase in fuel delivery. That’s achieved through bigger injectors, along with an aftermarket programmer that tells the injectors to stay open longer and flow more fuel into the engine. Making the injectors flow more fuel certainly makes more power, but the fuel pressure coming from the injection pump might be inconsistent or insufficient due to the fact that the factory fuel lift pump wasn’t designed to support aftermarket horsepower levels.
What the FASS does is increase fuel density by eliminating air vapor, along with increasing the amount of fuel going to the injection pump. In addition, it maintains the “fluid damping” effect on the injector tips. The presence of air bubbles can otherwise cause cavitation or pre-combustion, leading to a fatigue crack and tip failure.
As for the rest of the drivetrain, replacing the 68RFE stock six-speed transmission is a four-speed 4R100 unit that’s normally used on the 7.3L Power Stroke and can handle higher torque loads. Tim feels losing two gears is not an issue, due to the meatier power band of the engine. An ATS Co-Pilot manages the torque converter settings for an aggressive hookup, maximizing line pressures when needed while maintaining shift quality without having clutches bind or slip. 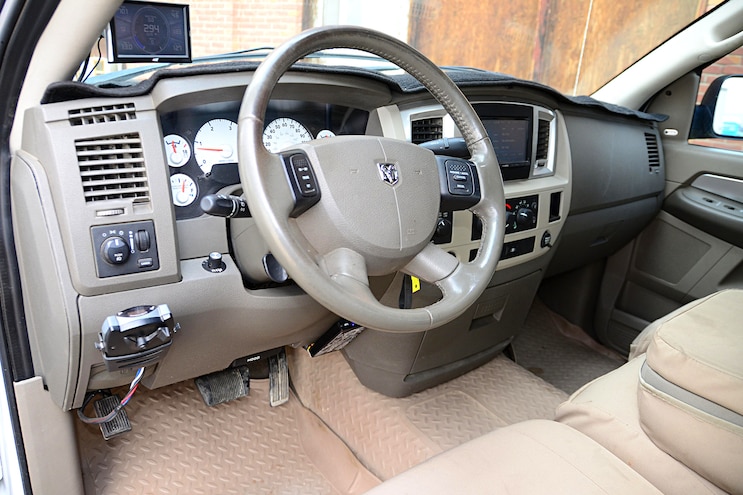 View Photo Gallery | 29 Photos
Photo 5/29   |   2007 Dodge Ram 2500 Steering Wheel
The rear-end ratio is a 3.73 Truetrac, and a Mag-Hytec finned-aluminum cover keeps both front and rear diffs cooler while adding more lubricant capacity. A magnetic drain plug in the diff cover grabs any loose metal shavings in the lubricant, keeping them out of the gear teeth. With this drivetrain setup, even after Terry is off and running, stomping on the throttle will spin the rear wheels. Speaking of rolling stock, the BFG T/A KM2 tires measure 285/75R17, and Power Stop brakes bring this fullsize rig to a sure halt.
An application of Rhino Linings underneath the bed adds extra protection on rocky roads, while the same coating covers the front and rear Rigid LED-equipped Fusion bumpers. There are also marker lights that can shift from amber to bright white as needed, whether out in the Nevada desert at night or in a dark mine shaft. 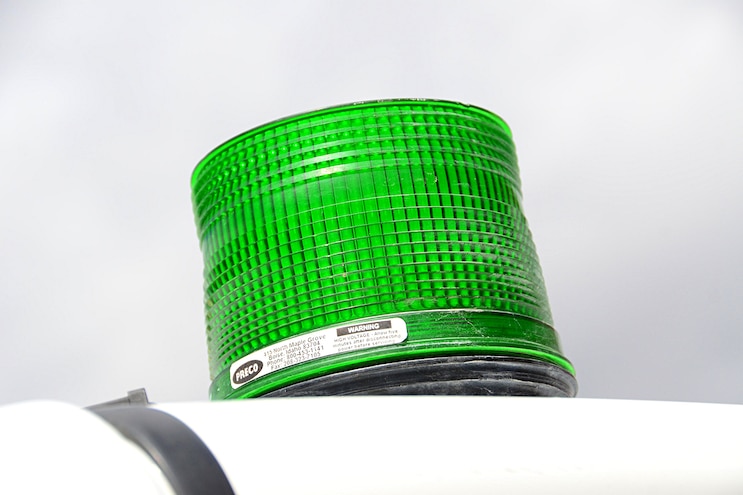 View Photo Gallery | 29 Photos
Photo 6/29   |   2007 Dodge Ram 2500 Preco
What about that green light on the roof of the cab mentioned at the outset? Every vehicle at the mining site needs to have a flashing green light on its roof. Signs warn: “Danger: Entering Blast Area.” There’s an old adage that mining regulations are written in blood because so many come as a result of fatalities.
Automated equipment for drilling, digging, and dumping helps to reduce this grim reality, and Terry keeps these mining rigs running smoothly. But first he has to get to the site. That’s where a powerful and smooth-running work truck is essential, which is why he had his Dodge all tricked out—to get the job done right and on time. 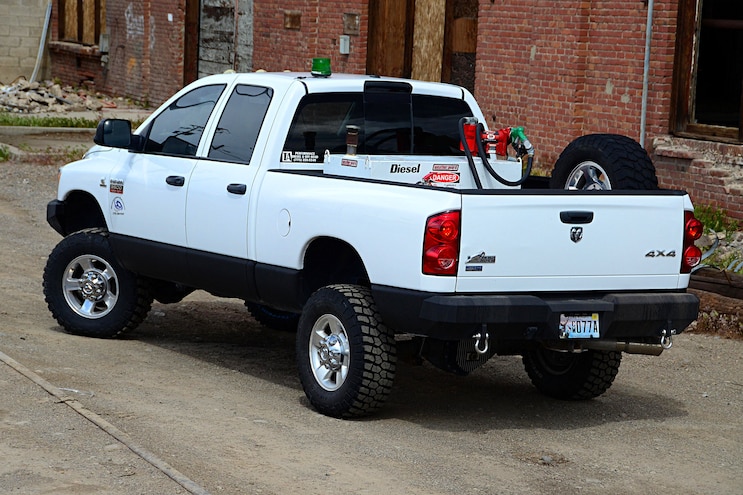