This 2000 Dodge Ram is Ahead of the Curve 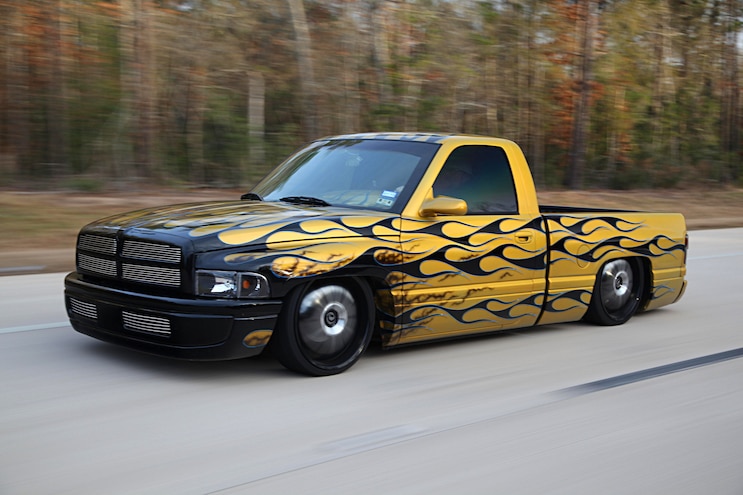 Being one of the first in anything represents a huge opportunity. Bragging rights get to be taken advantage of, names are spoken with words like “innovator” and “genius” attached to them, but oftentimes, the first prototype is usually a bit choppy, a bit unrefined, and hasn’t had all the bugs worked out of it yet. Anyone remember the Atari? Trends in custom-truck building work the same way. A builder gets an idea in his head and with a torch and some chunky welds, puts together the first incarnation of what’ll be sweeping the truck word in a few years. It’s difficult to pinpoint who fabricated the first stock-floor body drop, but the trend caught on quick. And after a few shops paved the way, it became a commonplace occurrence in the industry. 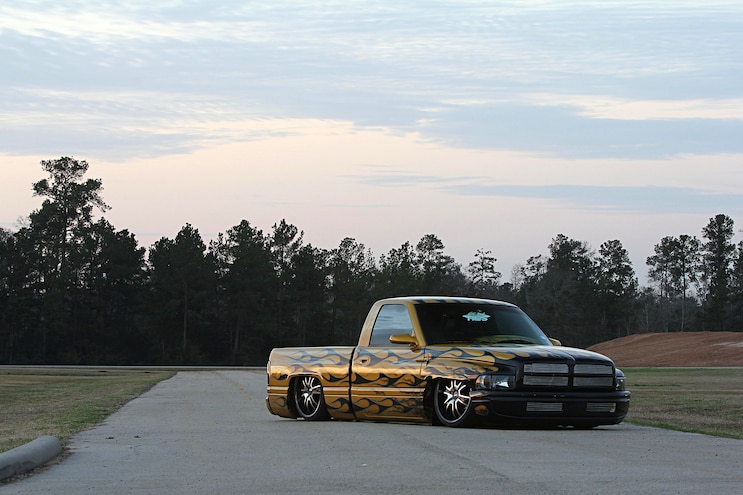 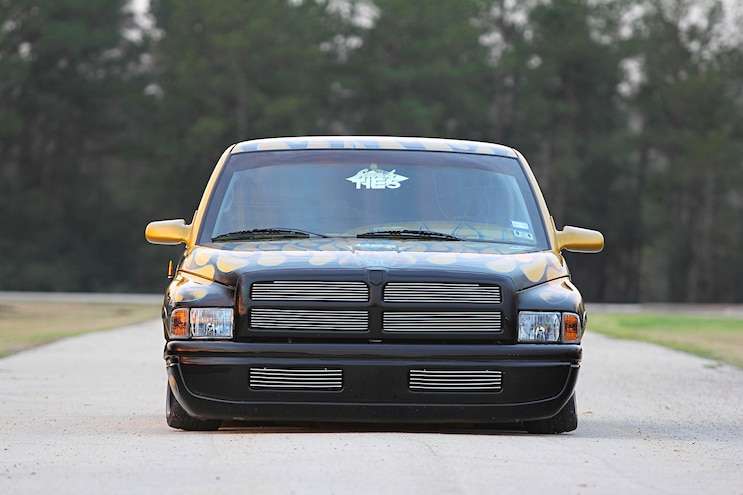 View Photo Gallery | 10 Photos
Photo 3/10   |   2000 Dodge Ram 1500 Truck Grille
This ’00 Dodge belonging to Ryan Benedict was built at a time that stock-floor body drops were just getting started and the innovators over at Ektsensive Metal Works were responsible for it. Lots of crazy builds have come out of the Ekstensive compound in Houston, and the crew has been responsible for a long list of envelope-pushing show trucks and everyday ’bagged and ’bodied creations. To get this Ram to lie that low without altering the cab floor, a custom 2x4 firewall-back frame was built to let the rockers hit the ground. This may be commonplace nowadays, but when this truck was built back in ’01, it was almost unheard of. By the time they were done with the frame, they welded in a traditional two-link with panhard bar to keep things simple, and installed a 20-gallon fuel cell between the rear framerails. The 2,600lb Firestone ’bags handle the raising and lowering and get fed through 1/2-inch copper lines connected to 4 1/2-inch GC extreme 450 valves with the gentle hum that only tandem Viair 480 compressors can make.
The drivetrain was left largely stock with only an Airaid intake and Flowmaster 40 series exhaust altering performance. But that didn’t mean the engine bay was left alone. It received a smoothed firewall, a color-matched black-and-gold paint scheme, and some huge tubs to hold the 22x9.5 American Racing wheels mounted to 235/30R22 Delinte Thunder D/T tires. 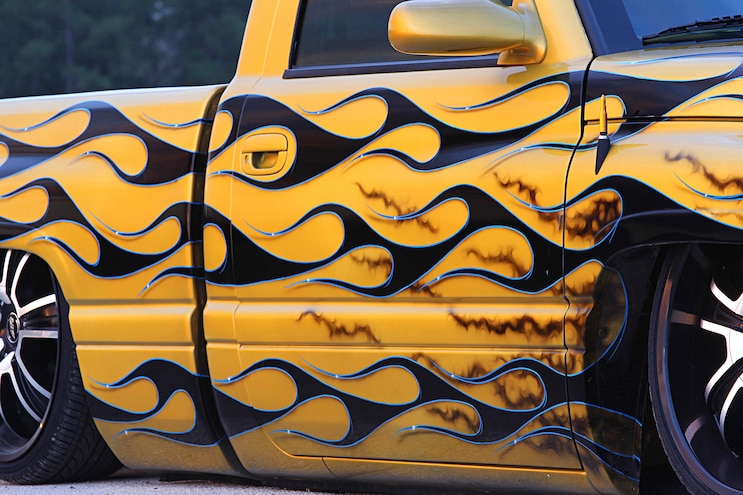 View Photo Gallery | 10 Photos
Photo 4/10   |   2000 Dodge Ram 1500 Truck Custom Flame Paint
The body is where most of the attention was paid to create something that struck an even balance between being visually appealing without being too overdone. Something that Benedict labored over. “I love the full custom, but factory look. This truck had a fully shaved bed at one time, but I replaced that with a stock bed, and factory bumper.” A billet grille was added, the bone-stock factory headlights and taillights were lightly sprayed black, the bumper was color-matched, and that was basically it.”
He did take the time to shave the bed-stake holes, but the normal trappings of a custom build were left alone as the door handles, rearview mirrors, and gas-filler location stayed right were the factory had designed them to be. The paint scheme was even kept as factory-ish as possible by keeping the black flames the truck’s original color, just re-sprayed and highlighted, and the base came straight out of the Chrysler paint catalog in the form of Inca Gold. 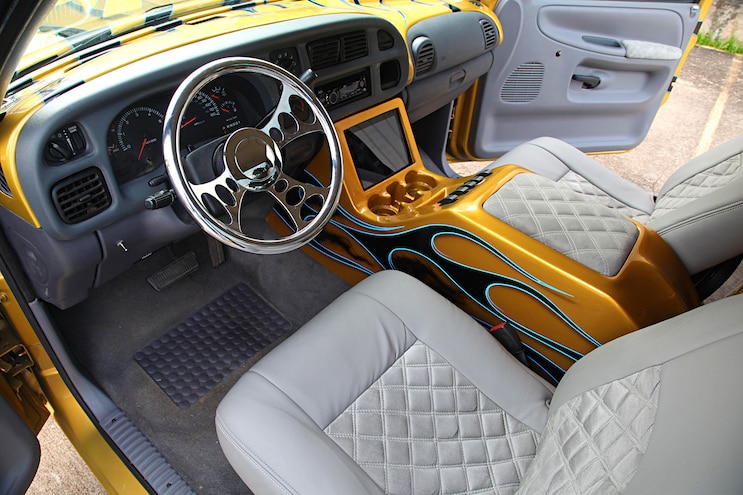 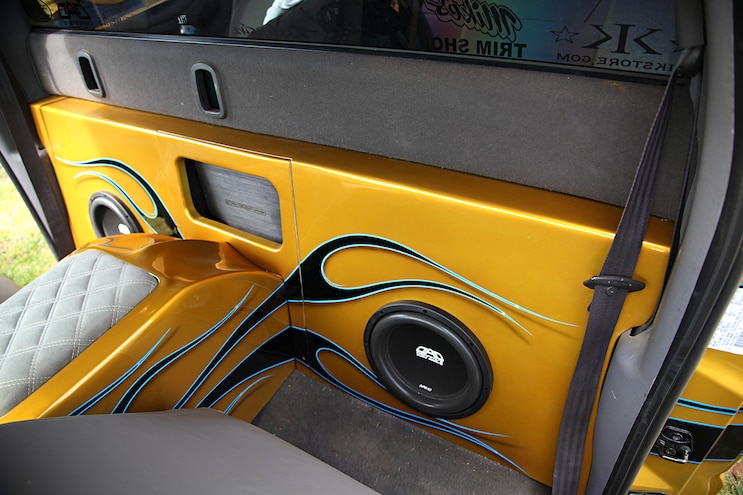 View Photo Gallery | 10 Photos
Photo 6/10   |   2000 Dodge Ram 1500 Truck Speakers
One departure from the mostly stock design of this Dodge is the interior, which continued the exterior paint design through the door jams and on just about every flat surface of the interior. A billet steering wheel gives Benedict a firm grip on the road, while gray vinyl and gray suede diamond stitching cover the seats. A custom fiberglass console featuring that same flame design from the exterior was built by Benedict and Justin Rushing. Tunes blast out of a JVC KD-R840BT head unit, with a Crossfire 500w amp, while Definitive Audio Designs KMH 10-inch subs were set in a custom sub box built by James Halter of SVC Tint and Audio out of Tyler, Texas.
A truck this simplistic has to have every detail going right when it is presented, as there is no room for errors. This ’00 Dodge certainly has, and because it’s one of the first of its kind, it still holds up even now. 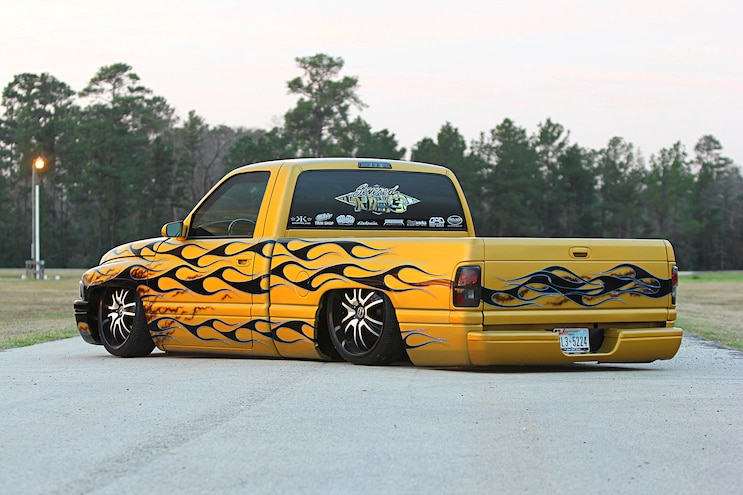