The personalization process with this truck has been an ongoing event for the last three years, and although it’s complete, it may never be finished. 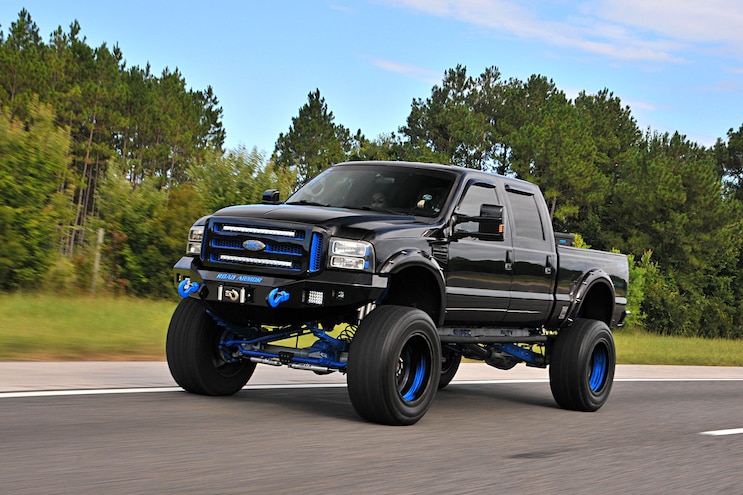 For the last seven years, Clearwater, Florida’s Brandt Jenkins has been a flight dispatcher both in civilian life and as a member of the Army Reserve. In his off-duty hours, he is also an active member of the Florida chapter of the High Altitude Truck Club, the group that spurred his interest in heavy-duty lifted trucks. His original automotive involvement began with customizing imports in high school. He later moved to a custom S-10, then an F-150. His priorities changed over the last 18 years as the family grew. His recent ride, an ’02 Ford F-250, reflects his current taste in custom transportation and has room for everyone. The personalization process with this truck has been an ongoing event for the last three years, and although it’s complete, it may never be finished. 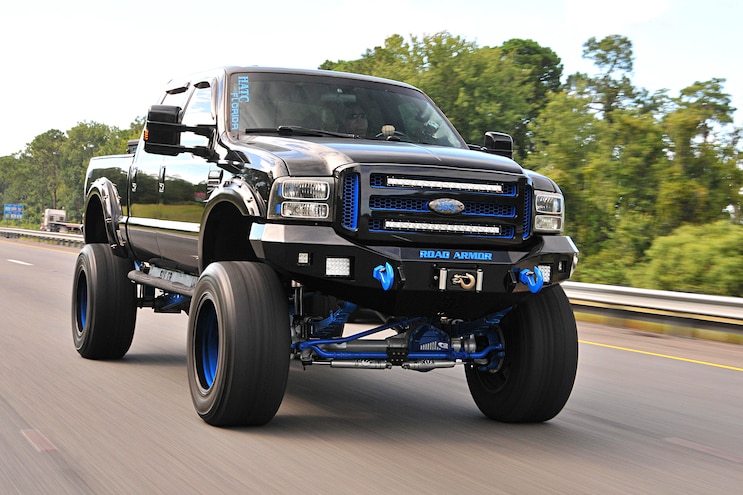 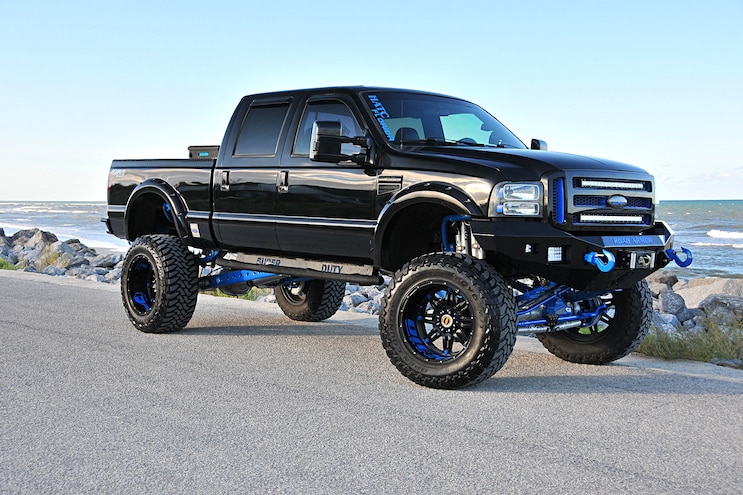 View Photo Gallery | 66 Photos
Photo 3/66   |   2002 Ford F 250 Truck Front Quarter
When Brandt found the truck, it was silver and maroon; the color change was one of the first modifications. He had definite ideas about color schemes, and the shiny black truck now supports multiple powder blue accents underneath with the color scheme repeated inside. Although the Ford had a lift kit on it when he bought it, the installation left lots to be desired. The new 12-inch Fabtech lift kit seemed like the right altitude level, fitting perfectly with the 22x14 Fuel Hostage wheels and 40x15.50R22 Toyo Open Country M/T rubber. Blocks were used in the rear and leaf springs were added up front, along with Fox reservoir shocks all around. The Fox twin shock steering stabilizer keeps the big rig on the straight and narrow, while the beefy 6-foot traction bars in the rear stabilize the truck, preventing axle wrap under hard acceleration. Both Dana 60s are equipped with 4.88 gears and G2 differential covers, stabilized with two shocks up front and four in the rear. The custom brackets up front holding the shocks serve a purpose, but the duplicated bracket set in the rear wheel openings are just for fun and symmetry. As a final personal touch, everything underneath was powdercoated blue to reinforce Brandt’s favorite blend of colors. 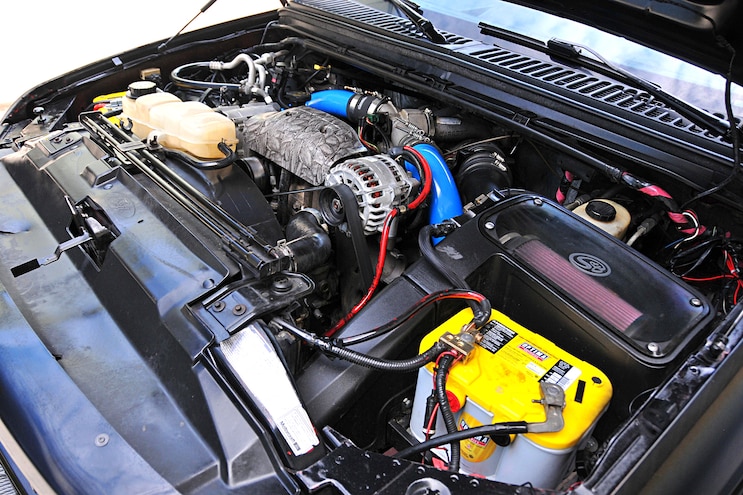 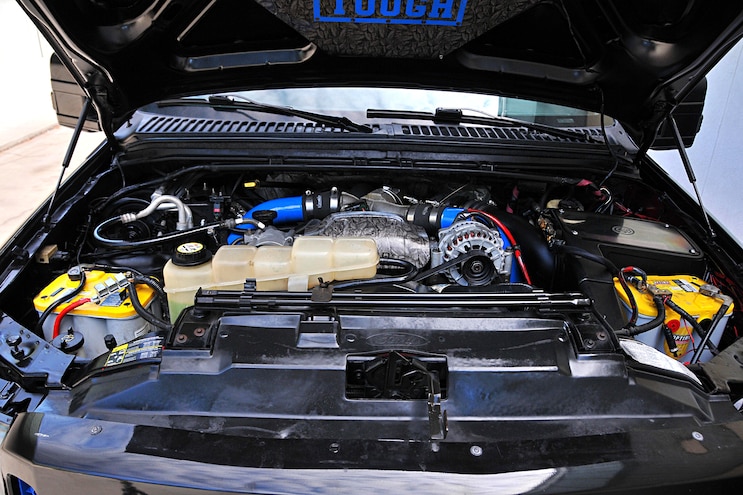 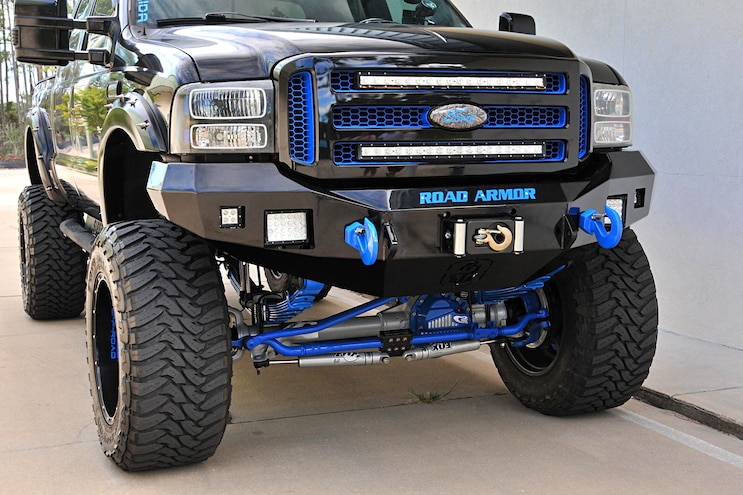 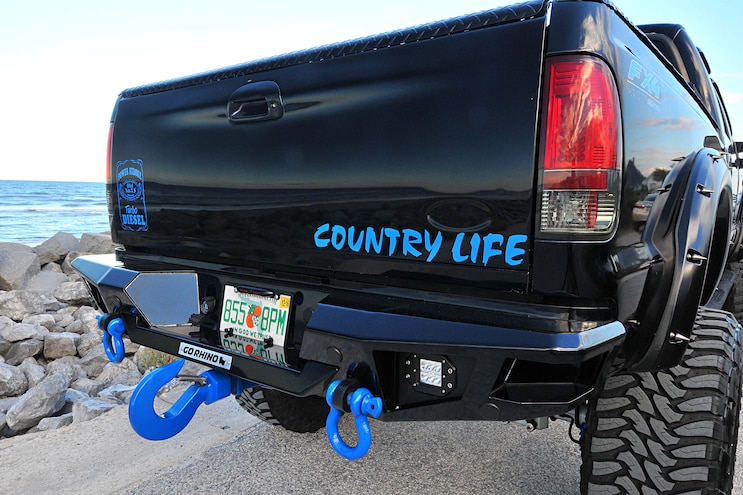 View Photo Gallery | 66 Photos
Photo 7/66   |   2002 Ford F 250 Truck Tow
The F-250’s body lines were what attracted Brandt to it in the first place, so he kept the exterior changes simple. Body accessories include Recon LED taillights, driving lights, and Harley-Davidson headlights, along with a Road Armor Stealth front bumper and a Go Rhino rear bumper. The multi-air horn setup from HornBlasters makes quick work of morning traffic snarls and adds to the fun. 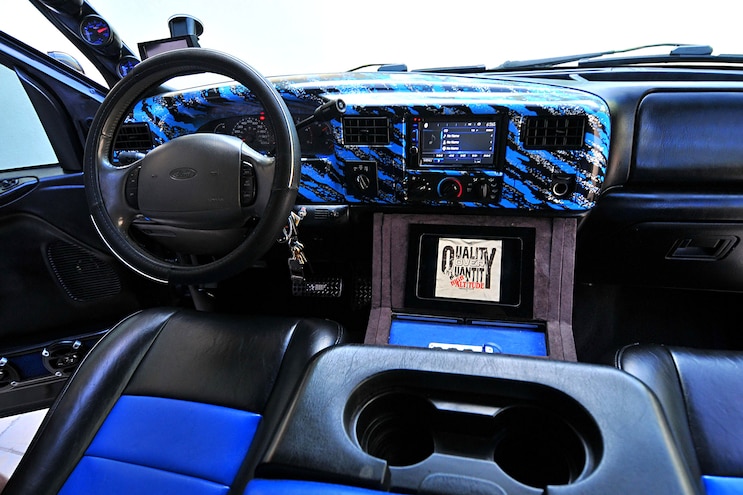 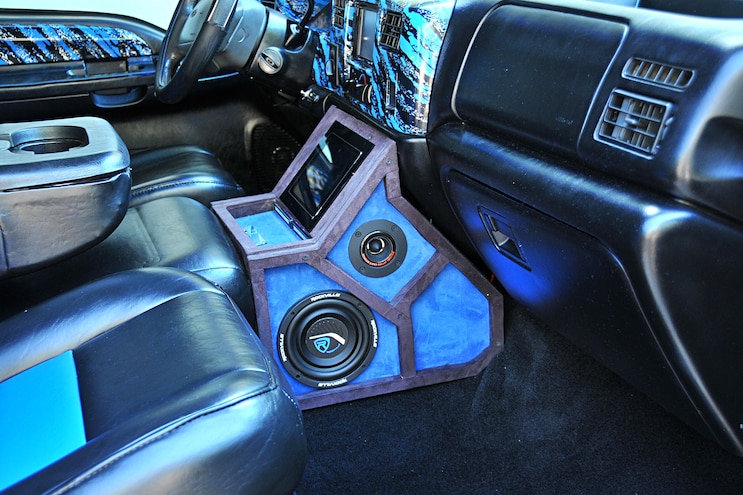 View Photo Gallery | 66 Photos
Photo 9/66   |   2002 Ford F 250 Truck Passenger Side Interior
Although Brandt did a lot of the work himself, he called upon the experts at Seat Tech Auto Upholstery in Largo, Florida, to stitch the custom black-and-blue leather coverings for the seats, a stylish replacement for the factory gray. They also handled the black carpet and eye-catching headliner with its distinctive illuminated Ford logo. The elaborate stereo was the finishing touch to the project and makes the big F-250 the perfect weekend cruise machine. Beginning with a Kenwood DDX372BT double-DIN Bluetooth head unit and a 5,000-watt Hifonics amp, the system features four 12-inch Rockford Fosgate subs behind the backseat, augmented with a pair of 8-inch Rockville mid bass speakers in the console. Mids and highs come from half a dozen 5¼-inch Scosche coaxial mids in the front door enclosures, four 6.5-inch mids, and a pair of Titanium tweets. In addition to holding the mid-bass speakers and tweets, the custom center console is the location for the mini iPad mount, providing vehicle navigation info and holding Brandt’s extensive music collection. A pair of Optima YellowTop batteries ensures adequate power. The dash and door piece accents were hydro-dipped by Grace-FX in New Port Richey, using that favorite mix of black and blue.
Now that his project is complete, Brandt may be a little closer to his goal of opening his own custom shop and building trucks 24/7. “I love doing the work myself,” he tells us. “I did 90 percent of the work on this truck and like to push the envelope, coming up with things that are different. My daughters loved helping me, and they call the Ford their monster truck!” 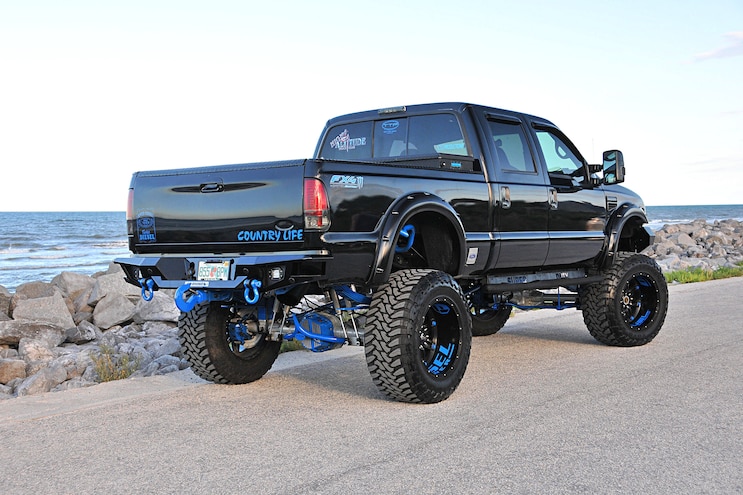 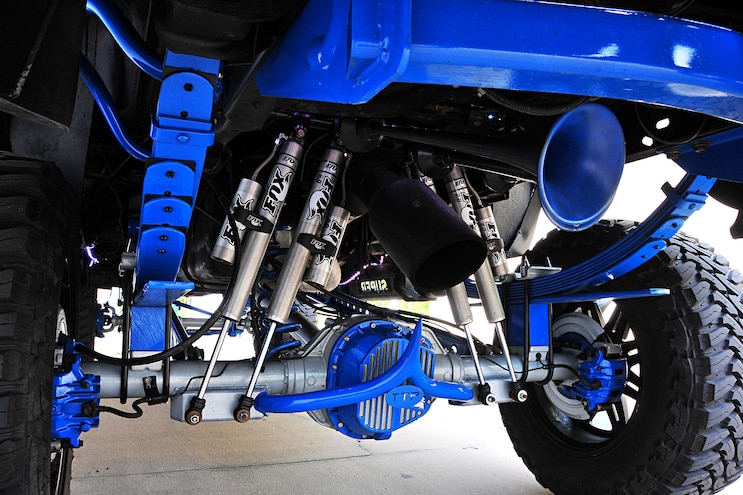 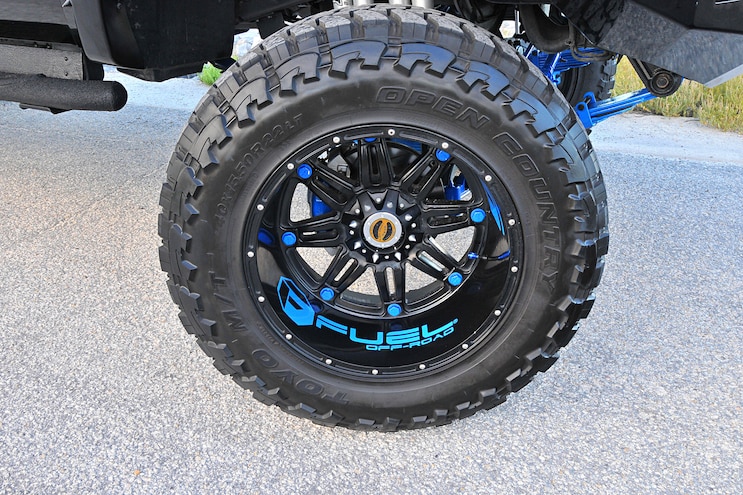