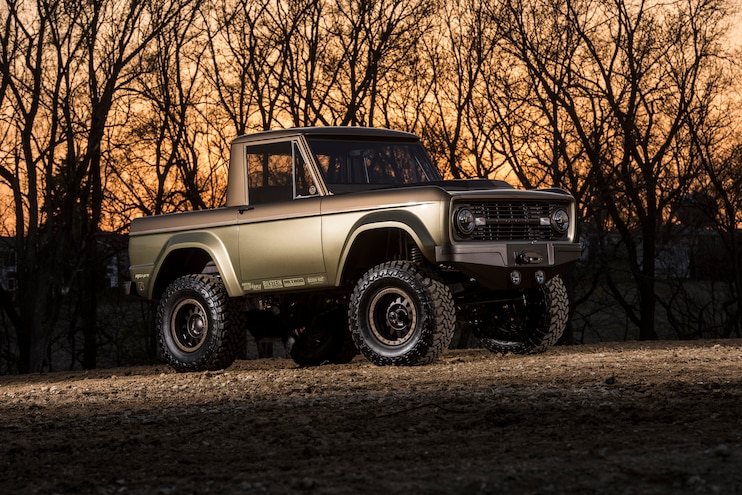 One fine day, Rich Gochanour was on the lookout for a parts truck to be cannibalized for a different Bronco project. Gochanour was talking with a good friend of his who just happened to have a derelict ’66 sitting around taking up space. A low-buck deal was struck for the mostly there Ford, which was then parked over at his house for a few years. But a funny thing happened over a slow course of time. The novelty of building a Half Cab instead of the original project he had gotten the parts truck for made more sense. 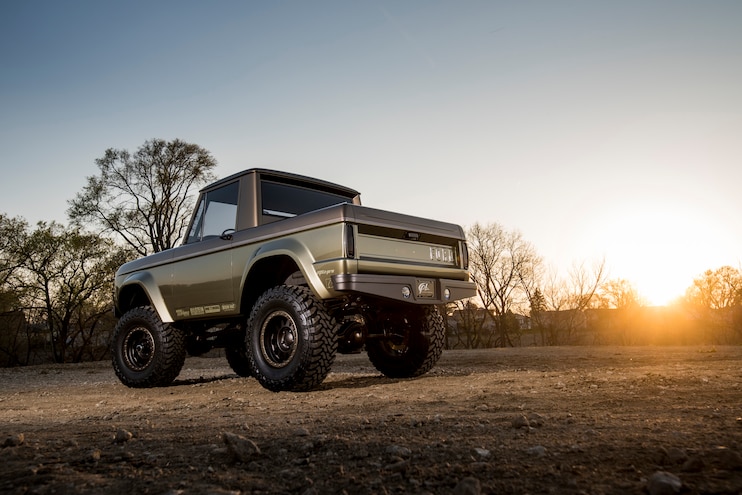 View Photo Gallery | 19 Photos
Photo 2/19   |   1966 Ford Bronco Rear
As many builds start, this Bronco was only destined to be a weekend fun-runner that had a few custom touches. In-between a string of build-then-stop sessions, Gochanour decided to let the guys over at CAL Automotive Creations work their magic. What came out in the end was a tough-looking, understated, but finely crafted build that hit all the right points without going overboard. He had laid out a definitive plan, and achieved the goal with no extra steps taken that did not belong there. The outcome was a balanced build that mated form and function perfectly. 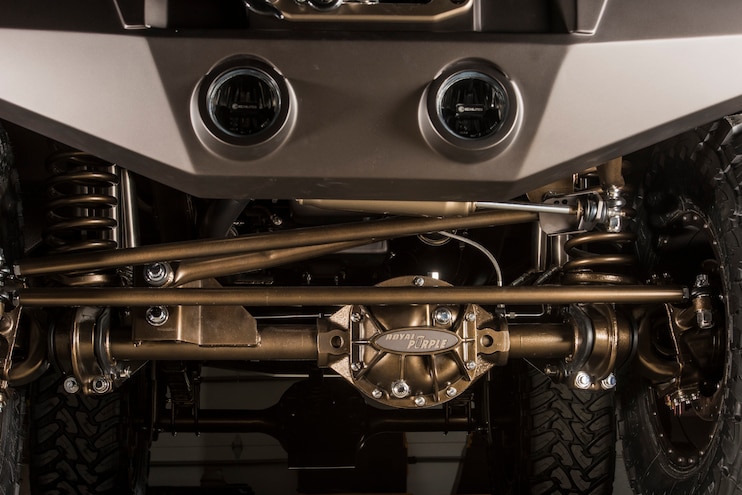 View Photo Gallery | 19 Photos
Photo 3/19   |   1966 Ford Bronco Suspension
Sporting a 5 1/2-inch James Duff lift kit with J.D.-supplied radius arms and rear leafs with Bilstein 7100s on all four corners, it has all the spring travel and dampening to swallow up whatever nature can throw at it. If nature throws too much at it, the custom-designed, 1 5/8-inch rollbar built by CAL Automotive Creations will protect the driver and passenger from danger. This Bronco has the confidence to storm the trails and use all of what this dirt-centric wheel and tire combo - 17x9 Method 101 Beadlocks mated with to 35x12.5R17 Toyo Open Country MTs. 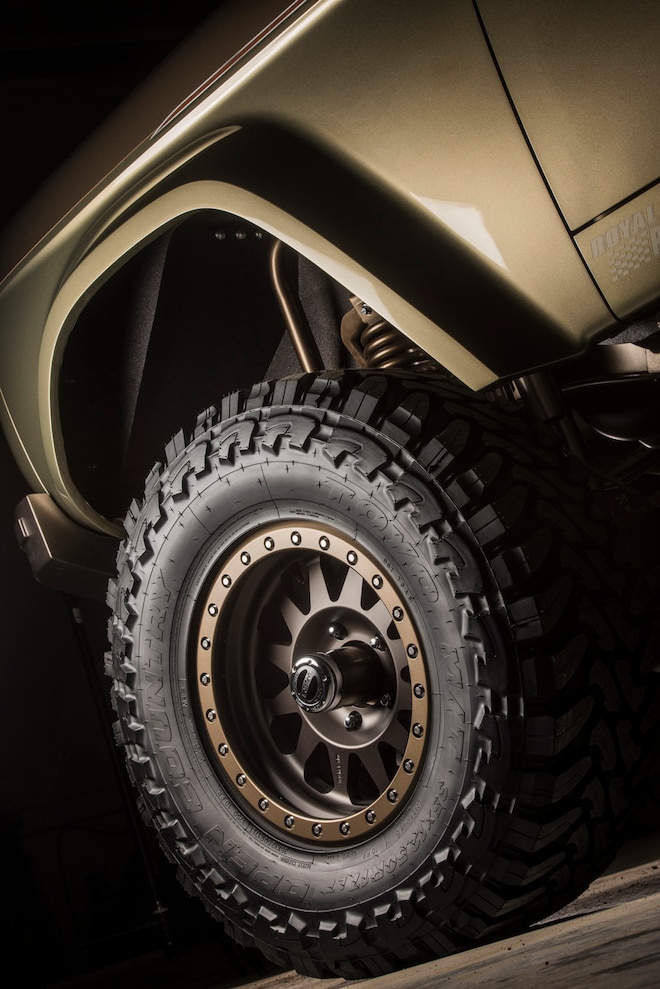 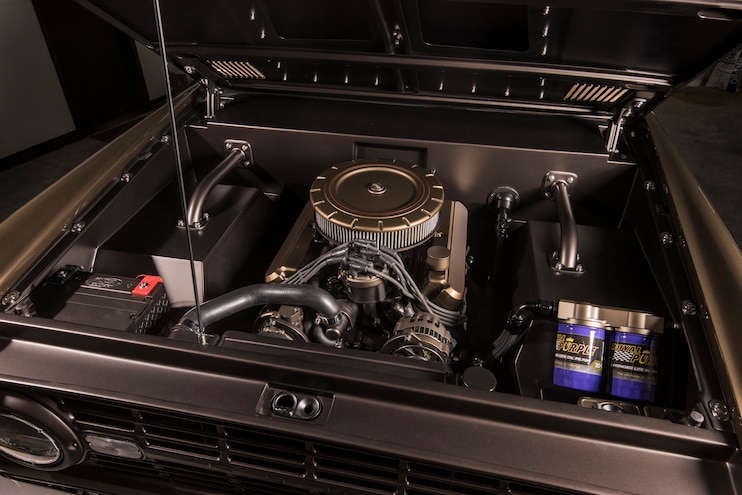 View Photo Gallery | 19 Photos
Photo 5/19   |   1966 Ford Bronco Engine
To get it through the deepest ruts on the trail is a 302ci Ford Racing crate motor that was given a MS3 tune by Scott Clark, dressed up with a Billet Specialties Tru-Trac serpentine kit. Spark comes from an MSD distributor, while a Flowmaster 40 series muffler with a custom-cut 2 1/2-inch exhaust system gets rid of the spent gases, and an XS battery with all its reliability keeps the SUV powered. A Bowler Performance 4R70W transmission was shoehorned into the Bronco to give it rock-solid shifting and was mated to a new Ford 9-inch rear end with a skidplate welded on for extra protection.
The body and interior also had careful planning to make it look as stunning as it does. The all-steel body was lovingly caressed and straightened by brothers Adam and Tyler Krause, while the folks over at CAL Automotive Creations in Bennington, Nebraska, tackled the build itself. A set of front and rear custom bumpers from CAL were prototyped on the Half Cab and are now part of its product catalog. Normally, the utilitarian off-roader would have huge door and hood hinges sticking out, but they were reworked so they were hidden to give a clean look. Going along with the clean look, the glass was flushed, the windshield fixed in place, the hood scoop grafted in, and the fuel filler was relocated to the bed floor. A subtle two-tone paint scheme of Ginger Ale Metallic with Golden Amber Pearl was sprayed by the Krause brothers, and a thick red pinstripe framed with two thin white stripes laid down by Bob Thrash. 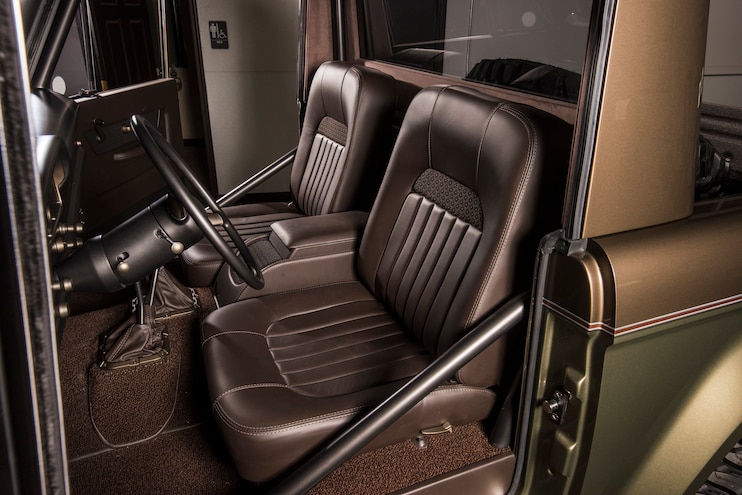 View Photo Gallery | 19 Photos
Photo 6/19   |   1966 Ford Bronco Interior
The interior is as artistically laid out as the exterior with a ’59 Ford F-Series dash equipped with a Vintage Air setup that was color-matched to the custom dark-brown leather seats. A suede headliner gives the interior a muted tone that plays off the matte finish of all but every other component. The carpet is just a few shades lighter than the surrounding paint and acts as a subtle backdrop to let the other painted surfaces take center stage. The gauges are a one-off set from Classic Industries that are the only modern-looking feature of the otherwise ’40s-era-Art-Deco-esque interior. To complete the transformation, the exterior paint scheme continues in the jams and frames, revealing the same two-tone and pinstripe.
This ’66 Bronco Half Cab is really a study in how form and function can be equally served, showing how a project truck can win awards and drop jaws at shows, but also rip some serious dirt and sand dunes. It’s good to know something can look as good as it performs.