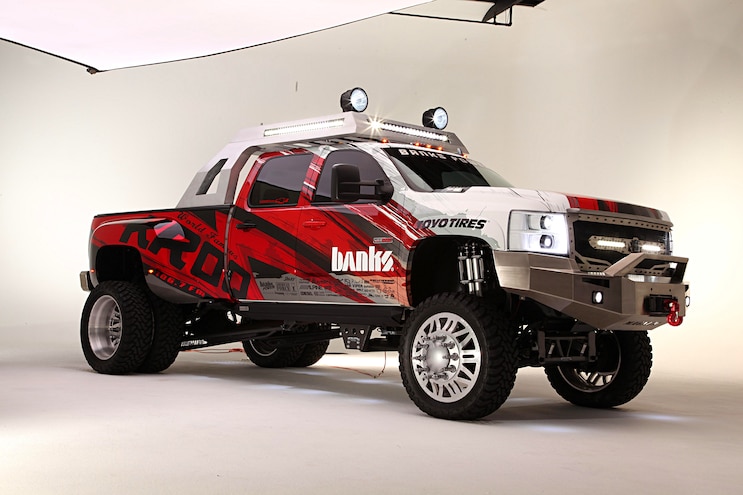 Here in Southern California there is a little radio station called KROQ that had extremely humble beginnings in the late ’70s in not much more than a converted basement. Over the years and through the various phases of new wave, Brit pop, grunge, and just about anything else that you could file under modern rock or alternative music, that station has become the authority on the genre to the point that stations around the world watch what songs make the KROQ playlist and promptly add them to their own.
Another noteworthy achievement of the station is that they have one of the longest-running morning shows in the country. Those of you from beyond the airwaves may not readily recognize the name of The Kevin & Bean Show, but when you learn that the careers of Jimmy Kimmel, Adam Carolla, and many others were launched from there, it puts things into perspective. 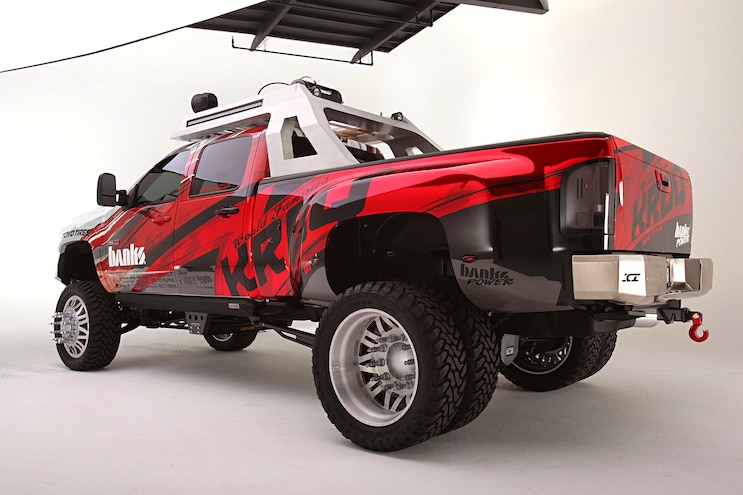 View Photo Gallery | 24 Photos
Photo 2/24   |   Kroq Chevy 3500 Rear
KROQ’s own Jay Tilles, known better as Lightning, has a similar story. He had humble beginnings in Orange County as a kid who was into all things audio, including big systems in mini-trucks and other vehicles, which is how he got his start in the world of music and vehicle customization. His interests set him onto a path that led him through a long line of highly customized vehicles and to a career in radio. Jay started more than 20 years ago as the whipping boy for the morning show who was constantly being asked to do absurd things (driving to the North Pole for a Christmas tree comes to mind) evolved into a ton of producer credits and his own time slot. He’s also the driving force behind many of the cool stories found at kroq.com.
With roots in the SoCal truck scene, it was only a matter of time before he was back looking for a truck to go to town on. Jay knew he wanted to go big, but also knew it needed to be a budget-conscious endeavor. Even though he had rock star ambitions, he still had a wallet made for radio! The plan here would be to find a gently used HD truck and take his time with the modifications. His truck may look like Jay went out and bought the most expensive lot on the dealership, and then doubled it at the shop down the street, but it is anything but. 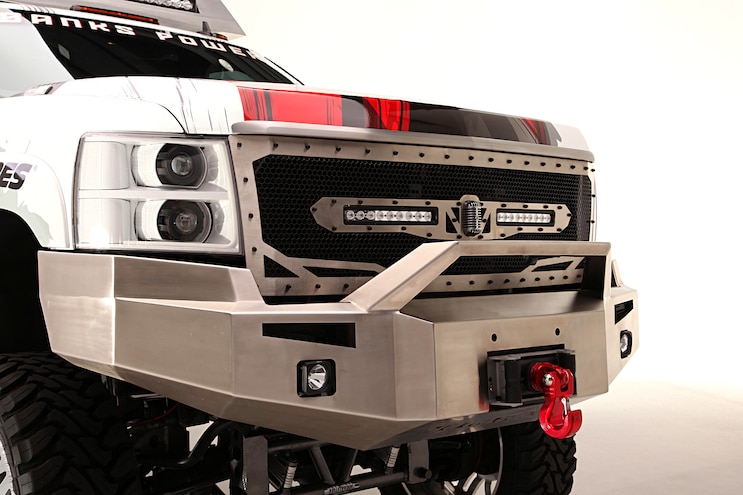 View Photo Gallery | 24 Photos
Photo 3/24   |   Kroq Chevy 3500 Front
After some searching, Jay found inspiration in a reasonably priced, appliance white ’08 Chevy 3500HD dualie. From there he spent a ridiculous amount of time researching every possible modification available to the truck, and soon had a not-so-short list of people he wanted to work with, many of which now are good friends of his. The first such stop was complete Bulletproof Suspension for a 10- to 12-inch lift with all the bells and whistles, including uniball upper control arms, dual reservoir shocks, billet shock clamps, and sway barend links, along with an upgraded Heim joint steering system. Out back, Atlas leaf springs and a modified Firestone Ride Rite system with remote control was mated with Bulletproof traction bars for a comfortable but functional ride. Everything south of the frame was powdercoated and detailed before the Wilwood 16-inch brake system was bolted up to back the 24-inch brushed American Force wheels and 37-inch Toyo rubber. 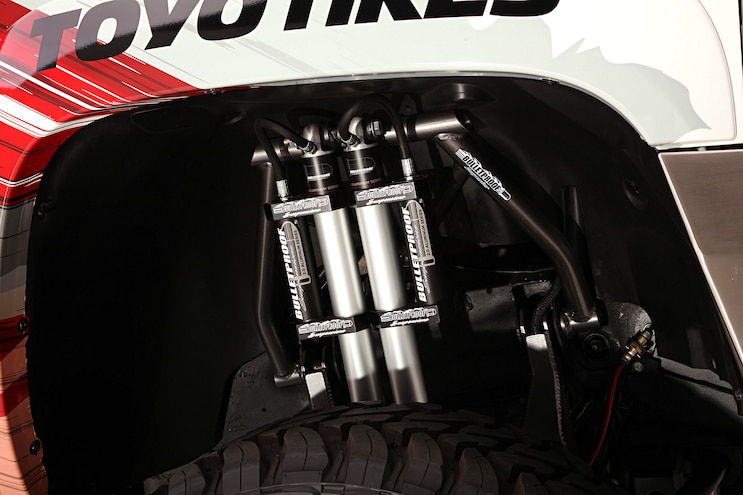 View Photo Gallery | 24 Photos
Photo 4/24   |   Kroq Chevy 3500 Shocks
With the underside of the dualie now way above par, the exterior was next to receive the transformation. The first things most people notice are the brushed stainless Magnum RT bumpers and brushed aluminum floating rack from Wright Metal Works. The cool additions continue from there, with the Amp Research steps to the one-off Gravel Empire grille. But before anything could be bolted up, the entire truck was wrapped in custom Avery Dennison Vinyl by Josh at Daley Visual, in a KROQ motif using multiple reds, whites, grays, and silvers. The truck was finished off with more one-offs from Billet Badges and custom lighting from Vision X and plainAnsimple.
That might where most people draw the line, but Jay wanted to make a respectable hauler out of the now flashy HD. Gale Banks himself master minded the formula for this 6.6L Duramax using just about everything off the shelf at Banks Engineering and a few extra parts and tuning tricks that aren’t. The long list from our Inside the Build section was good for 635 hp and enough torque to drag the KROQradio tower around town! The parts list was so extensive, Banks and the folks at Diesel Power, our sister magazine, decided to document the whole thing on its pages. The inside of the cab got the royal treatment, too. From the suede headliner to the Katzkin Lightning Edition seats, to the impressive array of Alpine products that make their 9-inch head unit come alive, the interior has come a long way from its early utilitarian days.
The one-off parts are truly what make this truck unique, along with cool touches like the custom lit accessory switches, the custom vintage microphone, and the little “Lightning” logos throughout. It took almost four years to get to this point, but we think the diligence and research paid off in spades. Jay now has a busy schedule of appearances to make—not just him, but the truck, as well. If you happen to see him at an event, make sure you ask him for some free stuff, and tell him Truckin sent you! 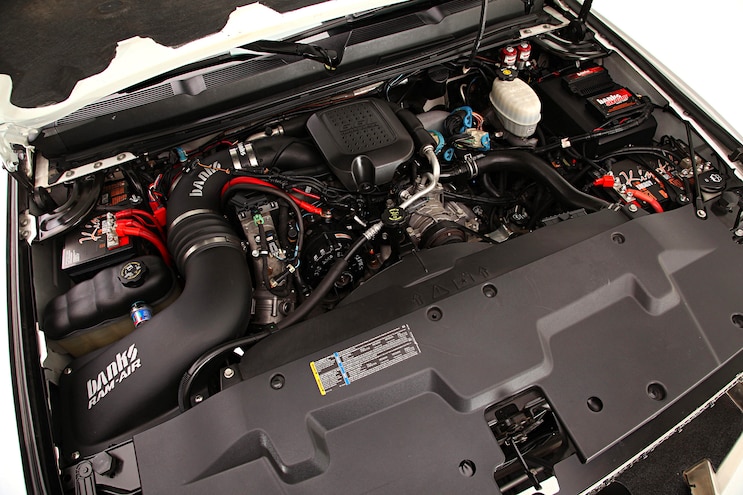