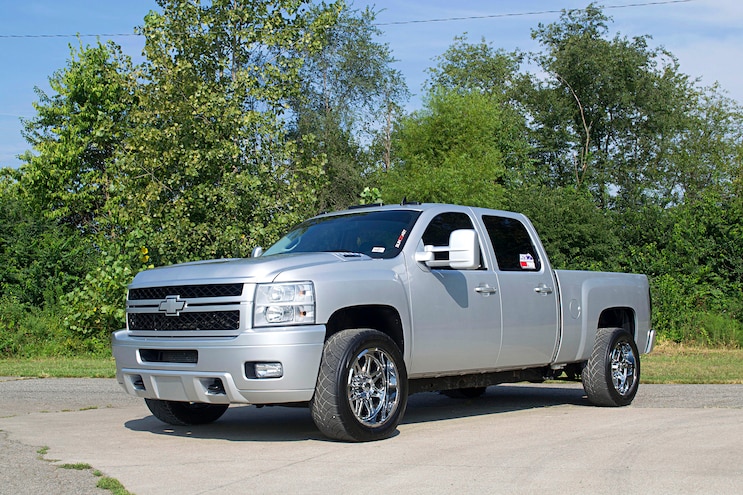 It takes a whole lot of know-how to build an 11-second diesel-powered pickup, so we're always impressed by fully dressed street trucks that cover the quarter-mile that quickly. Zack Moore’s ’11 Chevrolet Silverado 2500HD is definitely one of those rigs, and it’s doing so with a big turbocharger bolted to a stock-long-block 6.6L Duramax LML engine. 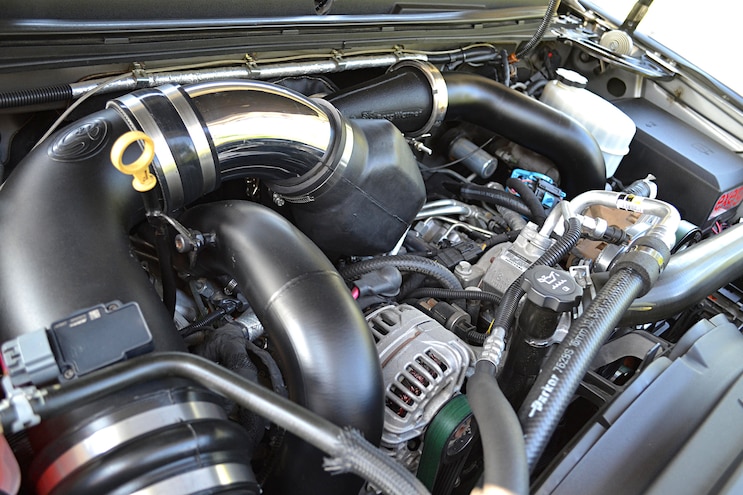 View Photo Gallery | 26 Photos
Photo 2/26   |   The 6.6L Duramax LML V-8 engine in Zack Moore's '11 Chevrolet Silverado 2500 HD cranks out 816 hp with the stock long-block and several well-thought-out upgrades. Torque checks in at an impressive 1,373 lb-ft.
Based in Muncie, Indiana, Zack’s rig caught our attention while he was competing in the ATS Diesel Performance/Diesel Power 7.70 Index Class at an Outlaw Diesel Super Series (ODSS) race and driving the truck to eighth-mile e.t.’s that convert to easy 11s in the quarter. “It’s actually on tune 1 out of 5,” Zack says. “The truck's gone 11.44 at 120 mph before.” For a setup like Zack’s, with an original long-block, the question is: What makes it so fast?
When Zack set out to build his street-strip pickup, he also wanted to see how far he could push its stock engine. Zack’s plan involved limiting torque while making some serious horsepower, keeping the airflow simple with a single turbocharger. As Duramax LMLs are quite stout from the factory, Zack was able to keep the stone-stock long-block for his engine build. “It has 52,000 miles and hundreds of dragstrip passes already, so it's already proven itself to be a solid combination,” he says. 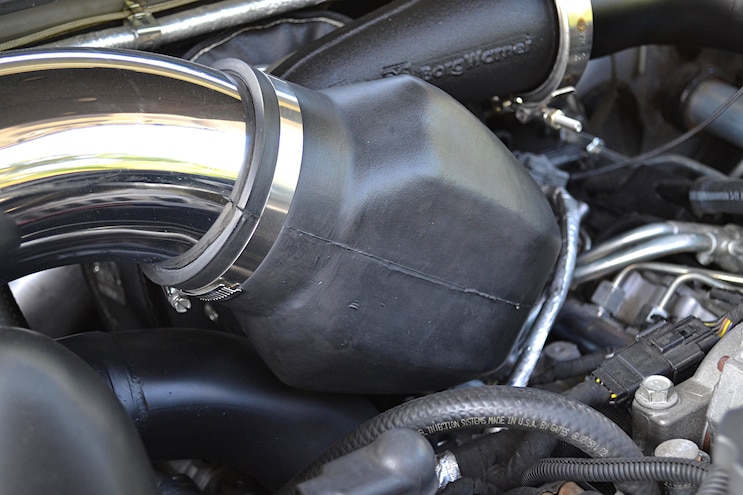 View Photo Gallery | 26 Photos
Photo 3/26   |   An S&B Filters air intake provides freer-flowing cold air to the turbocharger, which has been upgraded to a much larger BorgWarner S400-based unit. 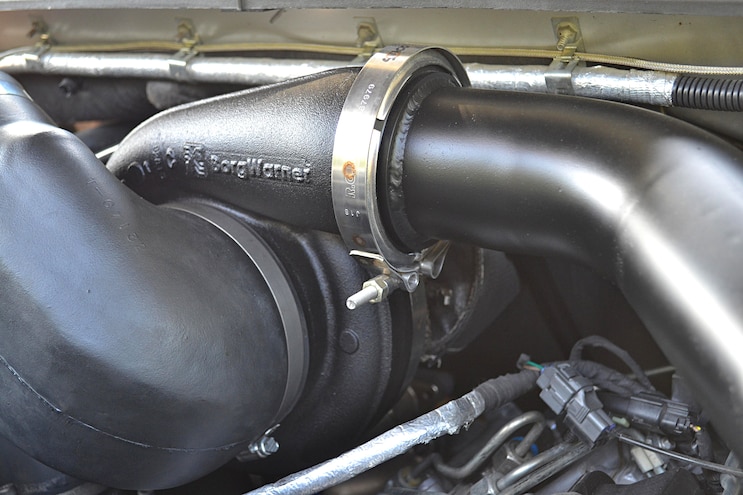 View Photo Gallery | 26 Photos
Photo 4/26   |   Fleece Performance Engineering ordered the 71mm turbocharger with an 83mm turbine wheel and a 1.10 A/R exhaust housing. It sends a maximum of 45 psi of boost through the stock intercooler and into the engine.
For assistance with making horsepower, Zack hooked up with the crew at Fleece Performance Engineering, who not only helped him build and tune the truck but also assisted with the parts selection, which is highlighted by one of the company’s 71mm turbochargers and two of its modified CP3K CP3 injection pumps. They also replaced the original injectors with a set of 60-percent-over squirters from Exergy Performance. The stock air-intake tube was swapped with a higher-flowing piece from S&B Filters, and the exhaust took a 4-inch Holset HX40-style downpipe that feeds a 5-inch system from Flo-Pro Performance Exhaust.
Fleece also helped with the Allison 1000 six-speed automatic transmission, which was assembled using a GMAX rebuild kit from SunCoast Diesel Transmissions. The original converter was also upgraded with a high-stall version to match the larger turbocharger, enabling Zack to leave the starting line at about 2,700 rpm and 20 psi of boost. The rest of the driveline is surprisingly stock, as factory driveshafts and 3.73-geared front and rear axles all remain as they were when Zack’s rig rolled off the dealer’s lot. 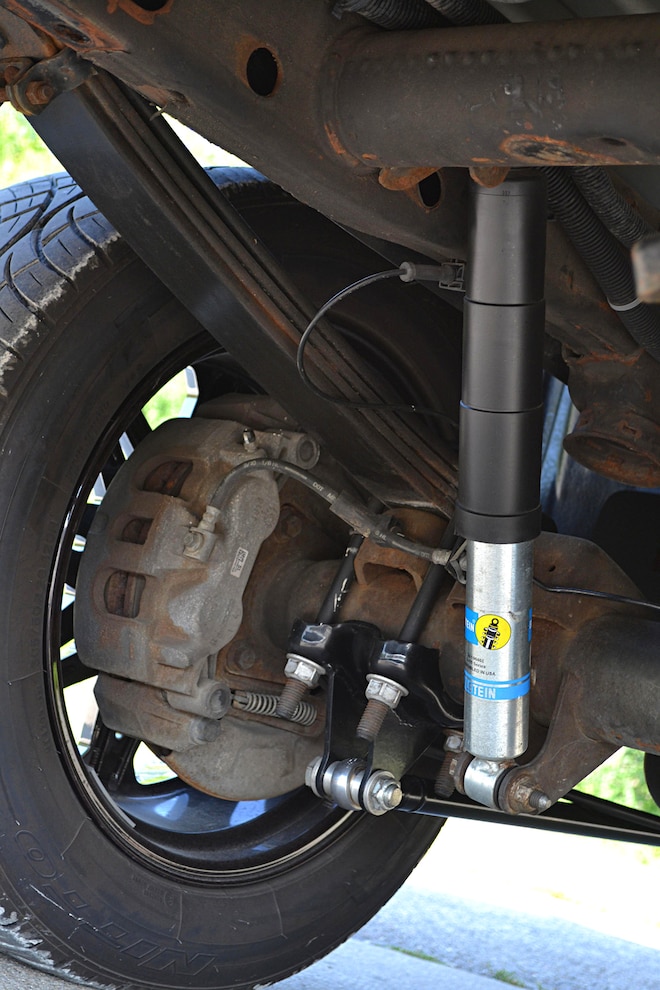 View Photo Gallery | 26 Photos
Photo 5/26   |   Zack removed the overload springs and installed drop shackles to make the rear end even with the front of the Silverado 2500HD. Bilstein 5100 shocks are also in place for improved all-around performance. 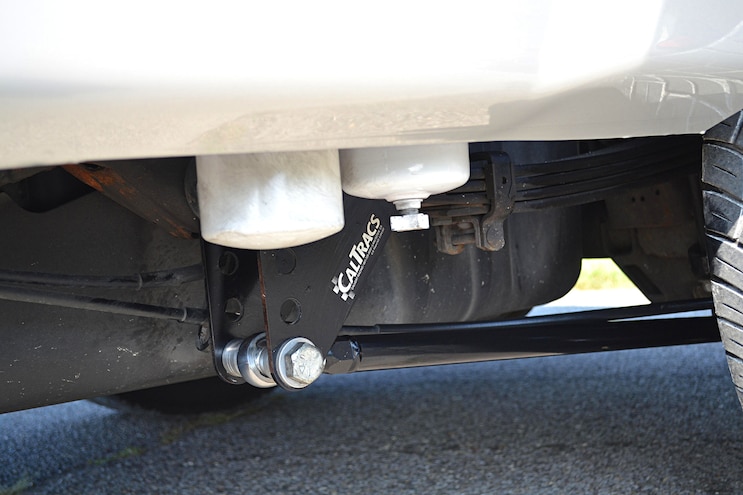 View Photo Gallery | 26 Photos
Photo 6/26   |   The rear suspension also received a set of CalTracs traction bars, which help prevent wheelhop at the dragstrip.
The suspension on Zack’s Silverado features a number of modifications that improve ride and performance on both the street and the dragstrip. The stock shocks were upgraded to Bilstein 5100s on all four corners, and the truck was leveled by removing the rear overload springs and installing 2-inch drop shackles from McGaughys Suspension. The front end was also upgraded with a set of tie-rod sleeves from Merchant Automotive to combat independent-front-suspension toe-in at the dragstrip.
After all the mechanical modifying, Zack wanted the truck’s exterior to stand out as well. Since he isn’t a “lifted-and-chrome” type of guy, Zack chose to match virtually every trim piece with the same Silver Ice Metallic as the truck’s body color. The bumpers, headlights, mirrors, hood vents, tailgate, and tailgate latch all got frosted, and the factory lights were replaced with Recon Unique Truck Lighting Components taillights (rear) and HID headlights (front). 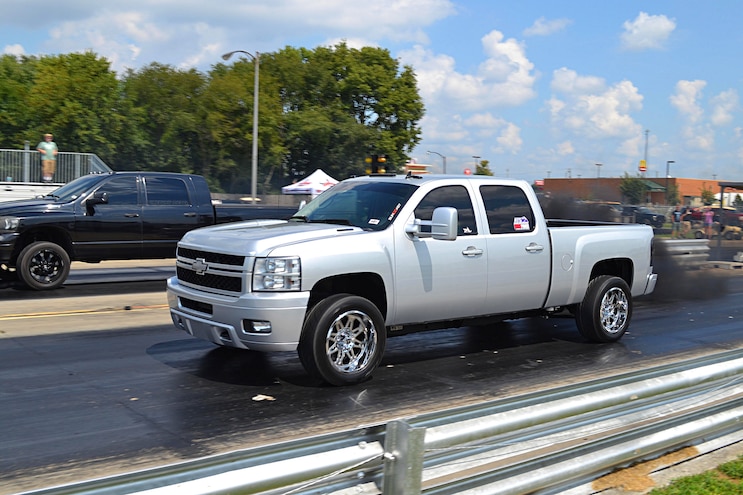 View Photo Gallery | 26 Photos
Photo 7/26   |   At the track, Zack leaves the starting line with 20 psi of boost, which has rocketed his ’11 Chevrolet Silverado 2500HD to a best 60-foot time of 1.64 seconds. As of this writing, the truck’s best quarter-mile e.t. is 11.44 at 120 mph.
After hitting the chassis dyno and laying down an impressive 816 hp and 1,373 lb-ft of torque with the highest ECM tune, it was time to hit the dragstrip, where the truck easily blasted into the 11s. And, after some suspension tuning, Zack's rig reached the 60-foot mark in only 1.64 seconds on its way to an 11.44-second pass at a blazing 120 mph. With hundreds of passes and tens of thousands of street miles to date on his truck, Zack has proven that with some careful tinkering, a Duramax LML’s stock internals can be pushed farther than anyone ever thought was possible. 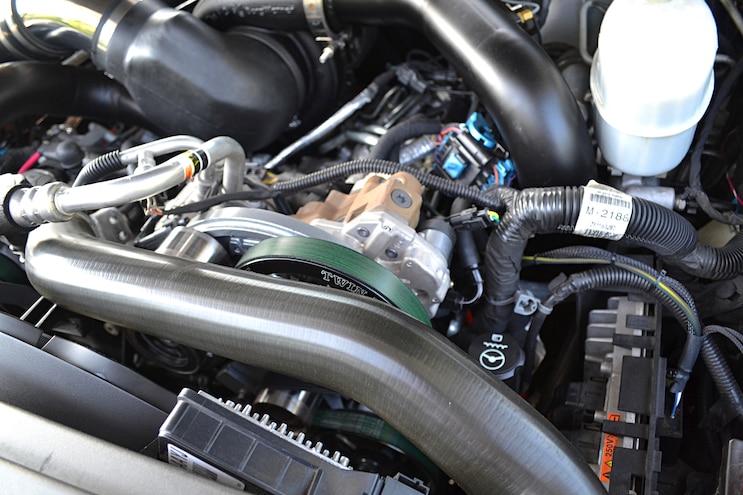 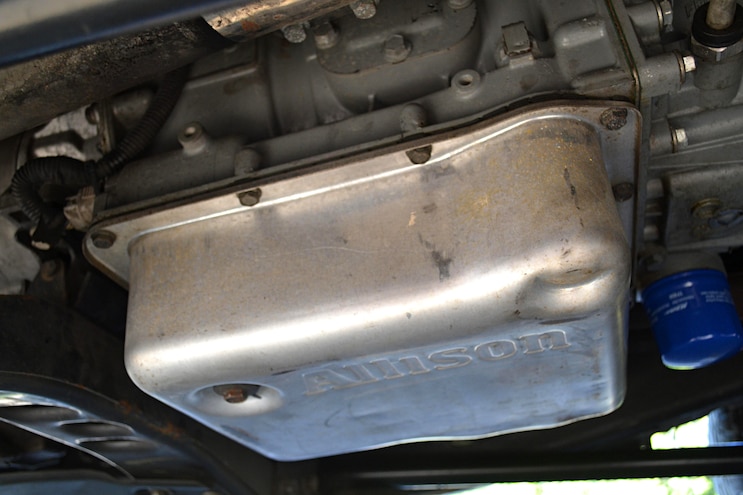 View Photo Gallery | 26 Photos
Photo 9/26   |   Although the transmission still retains its factory shafts, virtually every other part of the Allison 1000 six-speed automatic has been upgraded. A SunCoast Diesel Transmissions GMAX rebuild kit was installed, along with a custom 2,700-rpm-stall torque converter. 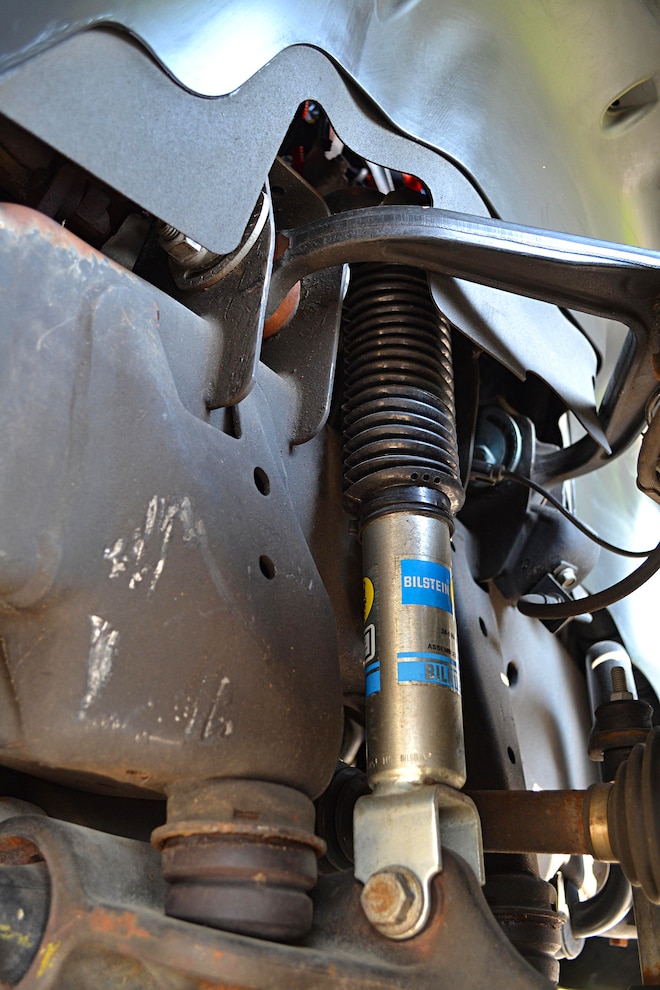 View Photo Gallery | 26 Photos
Photo 10/26   |   Bilstein 5100 shocks replace the original dampers in the front suspension, which has upgraded tie-rod sleeves that ward off broken suspension and steering parts at the dragstrip. 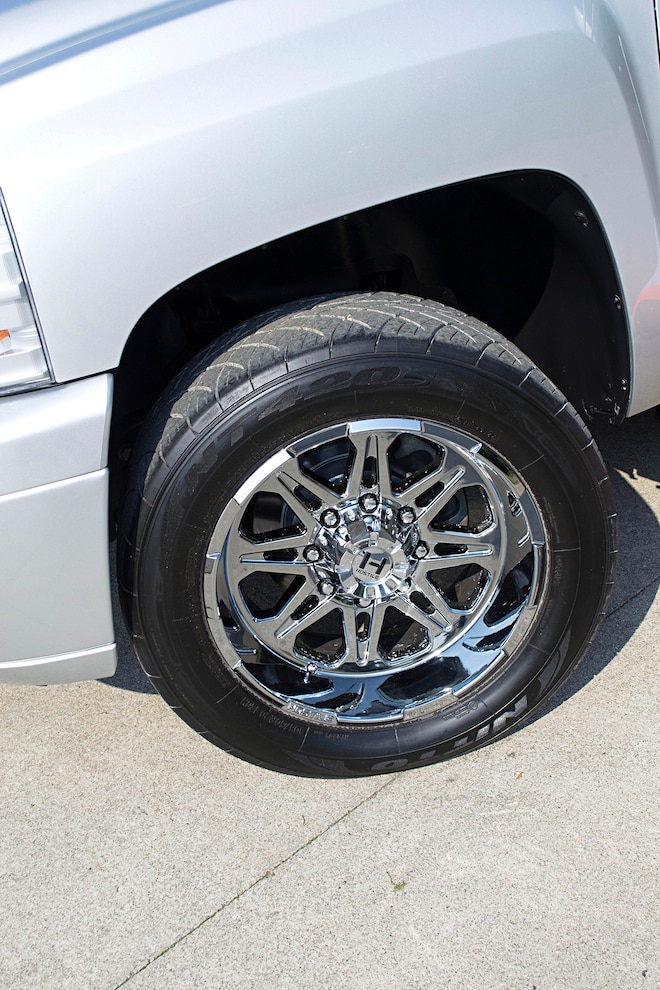 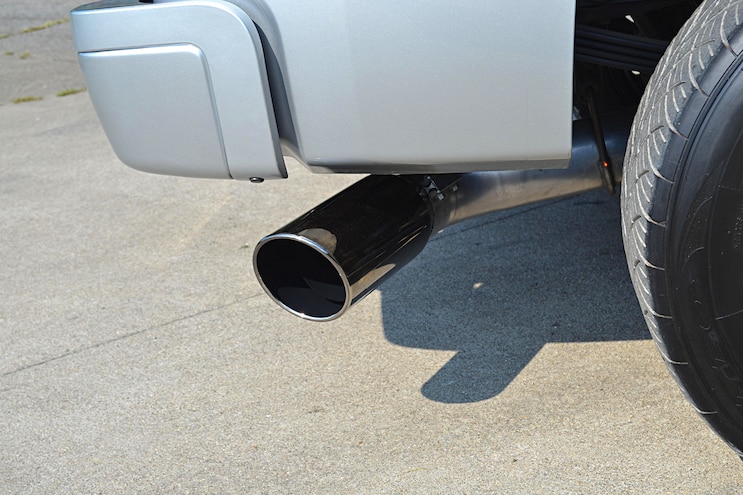 View Photo Gallery | 26 Photos
Photo 12/26   |   With a fairly large turbocharger, Zack went with a 5-inch exhaust system from Flo-Pro Performance, which exits into a 6-inch tip. 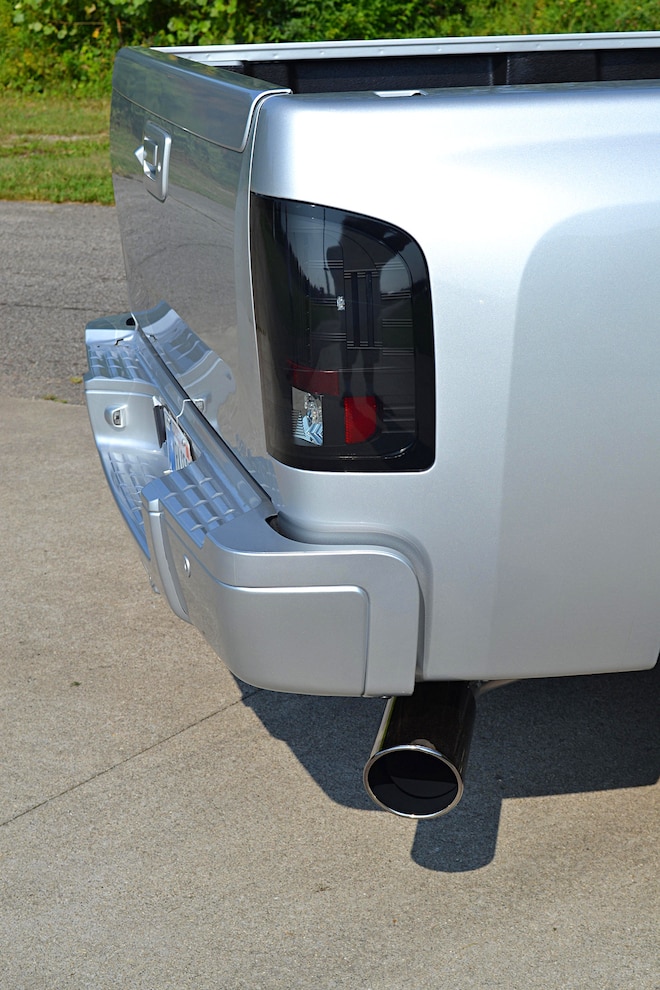 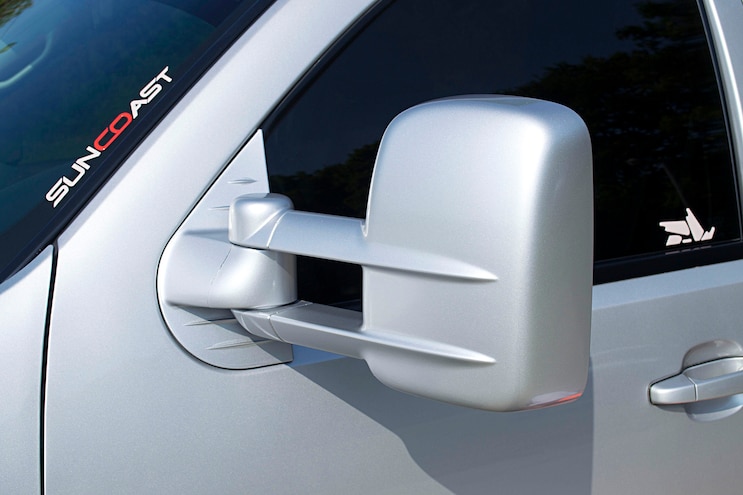 View Photo Gallery | 26 Photos
Photo 14/26   |   The color-matching extends to many other parts, including the side mirrors, which are painted Silver Ice Metallic. 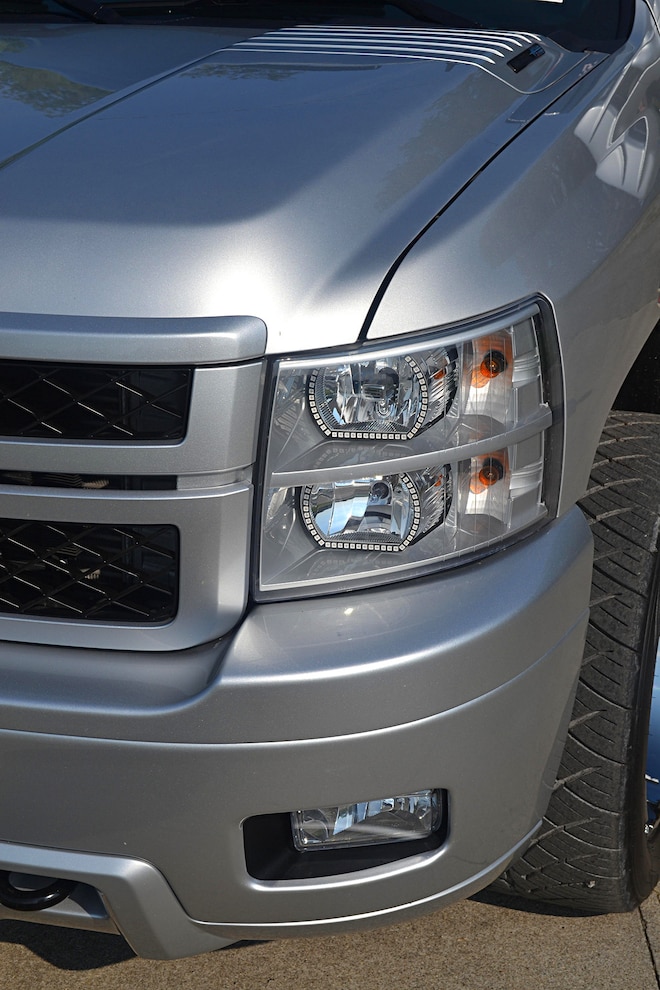 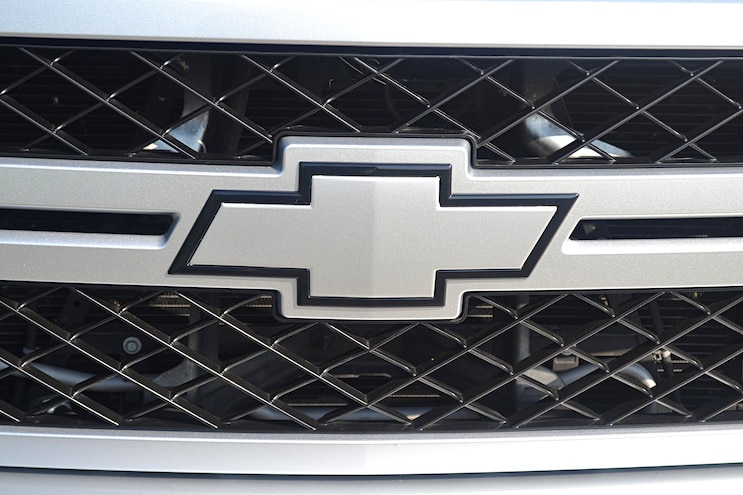 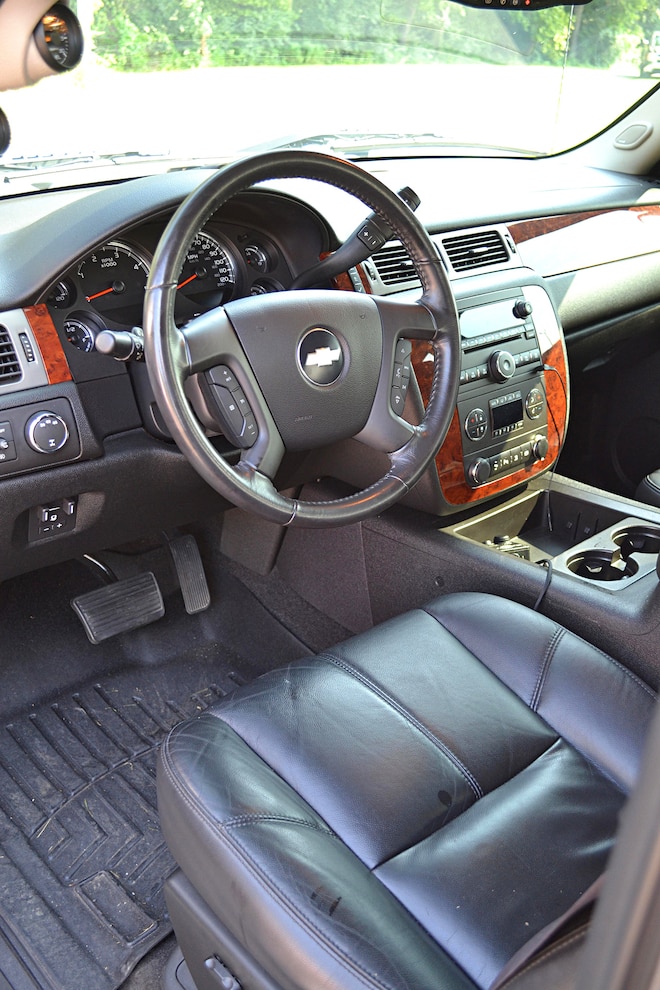 View Photo Gallery | 26 Photos
Photo 17/26   |   The '11 Chevrolet interior is a nice driving environment. As such, it’s yet another area on Zack’s truck that remains largely unmodified. 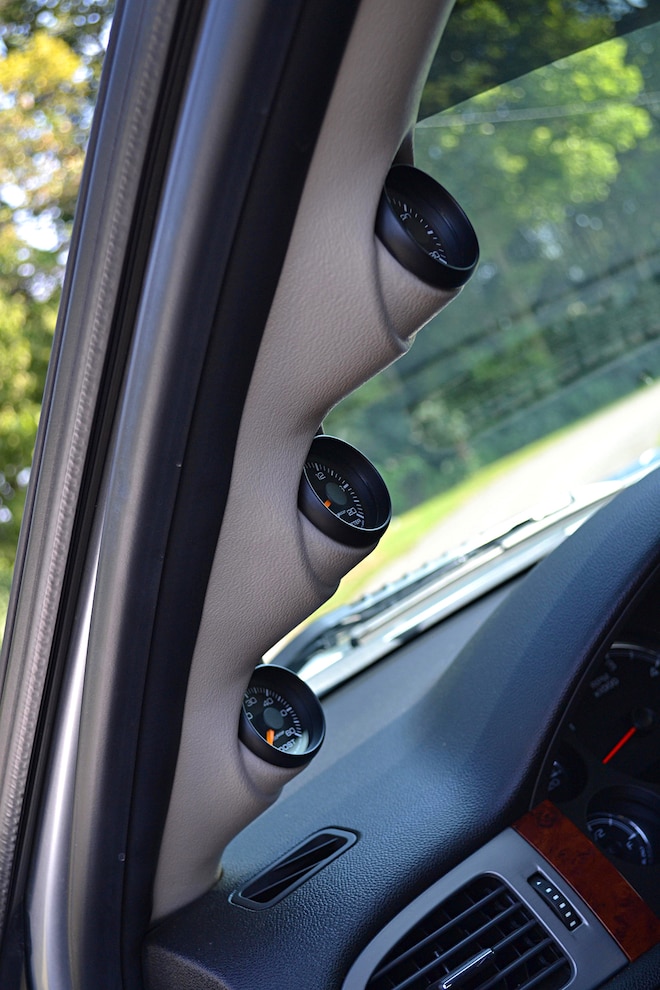 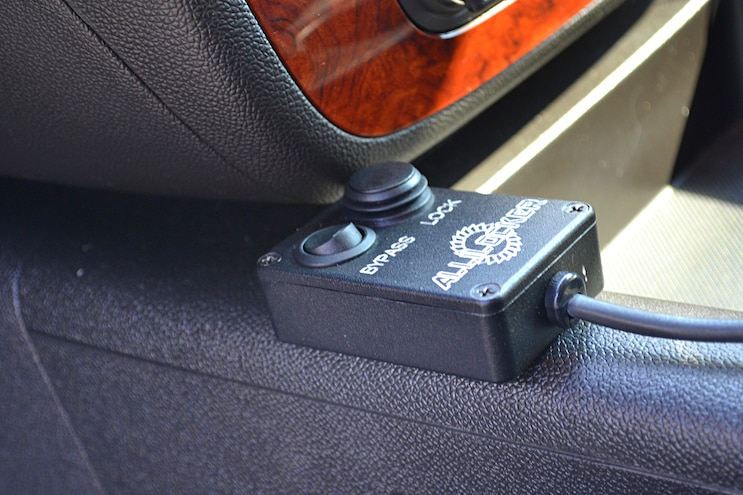