Riding High: A New Name for the S-Class of SUVs 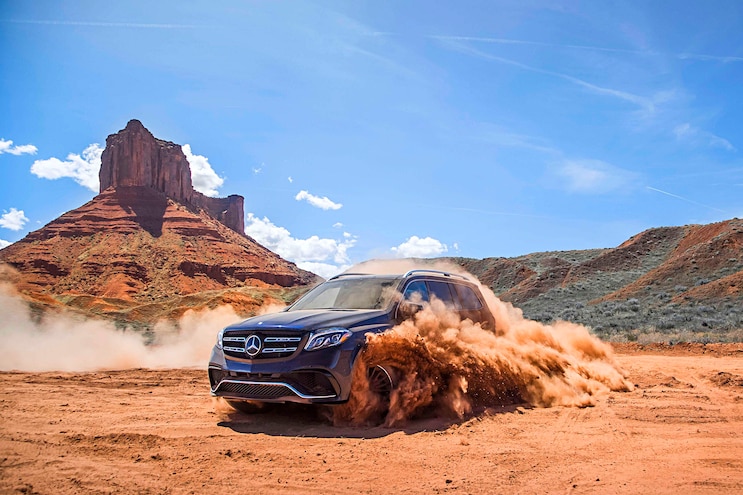 What would you get if you mated what used to be Mercedes-Benz's GL-Class three-row SUV with its luxury S-Class flagship sedan? Probably something very much like this large and loaded ’17 GLS-Class SUV, which Mercedes positions as the "S-Class among SUVs." 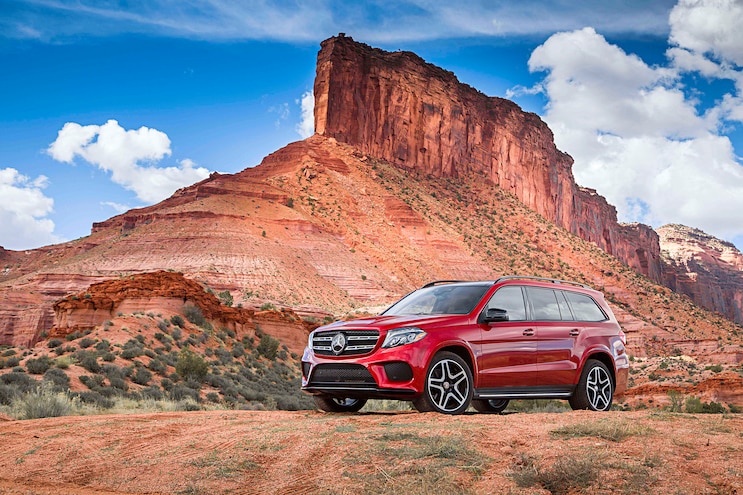 View Photo Gallery | 28 Photos
Photo 2/28   |   2017 Mercedes Benz GLS
While it looks like the long, tall, roomy, fullsize three-row SUV it is, this new GLS wears a fresh new face somewhat like the one on S-Class Coupes and Cabriolets. It leads with a large central Mercedes star flanked on both sides by twin three-segment horizontal chrome bars (instead of single bars) and swept-back two-element headlamps under a twin power-creased hood. And its squared-off tail is updated with a new bumper and full-LED taillamps.
Standing nearly 17 feet long, 7 feet wide, and 6 feet tall, it can transport up to seven adults in reasonable comfortable or nearly 94 cubic feet of expensive stuff with both second and third rows folded flat, and it can tow up to 7,500 pounds. Inside its commodious cabin are a new instrument panel with a color Media Display, a new multifunction three-spoke steering wheel wrapped in Napa leather, new color and trim options, and a modified center console with a touchpad cantilevered over the standard Mercedes COMAND control knob. 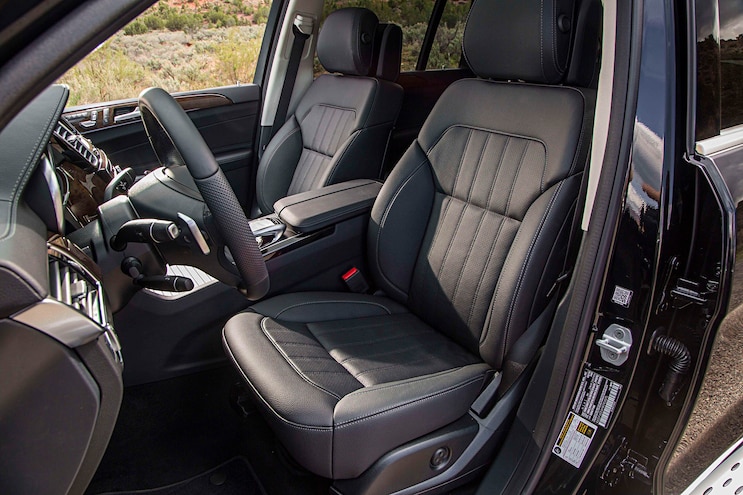 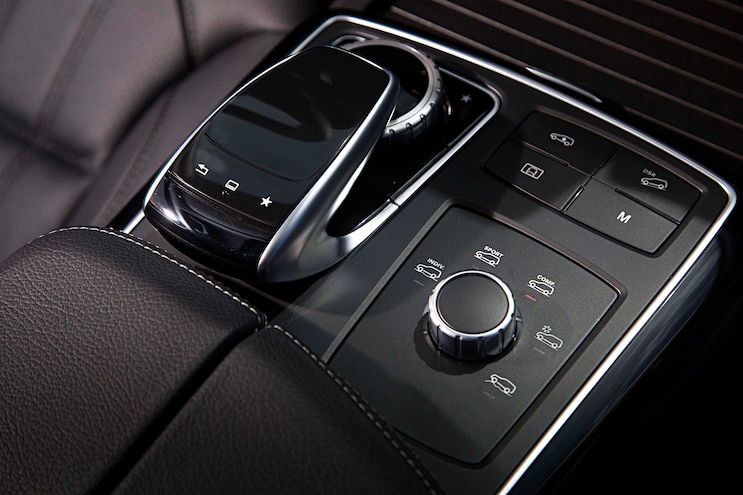 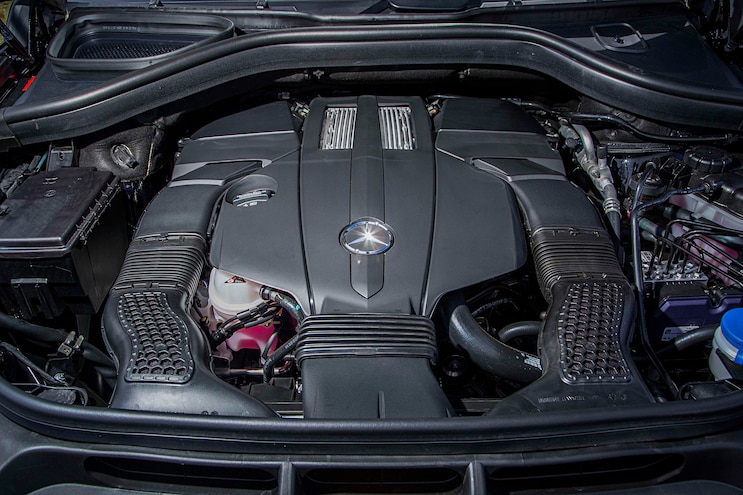 View Photo Gallery | 28 Photos
Photo 5/28   |   2017 Mercedes Benz GLS Engine
Some have written that the GLS feels smaller than it is on twisty two-lanes. Maybe so, but in our week of city, suburban, freeway and occasional two-lane cruising, our GLS450 felt big, tall, and heavy—because it is. The twin-turbo V-6 seemed strong enough at most speeds, though a bit slow off the line from rest. Some of that was turbo lag, the rest because it launches in Second gear unless you manually choose First with the steering wheel paddle. Those paddles are handy for choosing ratios when you want to, but the nine-speed upshifts when it decides to when accelerating. It accelerates zero to 60 in about 6.5 seconds and scores 17 city, 22 highway, and 19 combined mpg in EPA testing, which is right in line with our 19.2 mpg average. 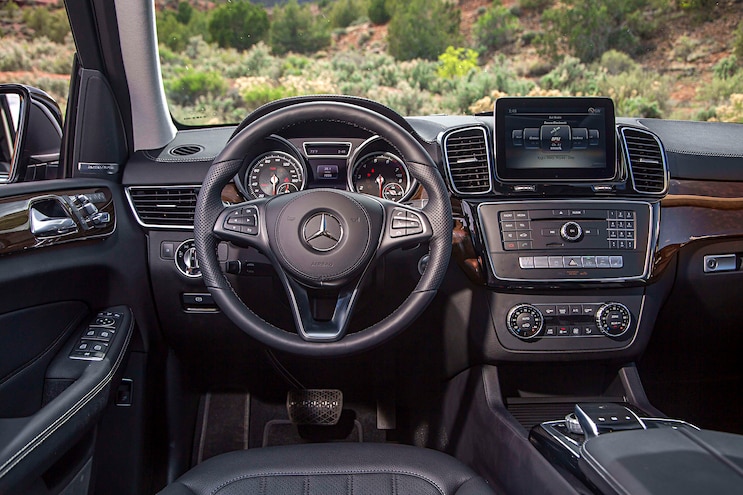 View Photo Gallery | 28 Photos
Photo 6/28   |   2017 Mercedes Benz GLS Interior
That dainty steering column-mounted electronic shifter flips up for reverse or down for drive, but the brakes hold tight until you add some throttle, which keeps it from rolling before you're ready. Park is a button on its end, which takes some getting used to. There's also a learning curve for the COMAND-controlled infotainment system, which typically requires a series of push/pull/twirl/poke steps to find and choose what you want. The new touchpad above helps, but we prefer a big touchscreen with large icons. On the good news side is a volume knob and hard buttons for instantly calling up radio, media, nav, or phone.
The Driver Information Center (DIC) between the big, round speedo and tach displays a lot of useful things, but transitioning from one menu to another requires quick thinking because while you're deciding which way to scroll (using arrow buttons on the steering wheel), it defaults out of select mode in about two seconds. And unlike most other vehicles with Lane-Keeping Assist, which gently nudges you back toward your lane when you inadvertently begin to stray out of it, the GLS has no button to activate and deactivate it. Instead, it requires several steps to turn it on or off through the DIC, which is tedious and distracting. We also could not find a way to cancel or mute the navigation system's guidance instructions. Our only other complaint: the dark, shiny Anthracite Poplar trim looked more like plastic than real wood. 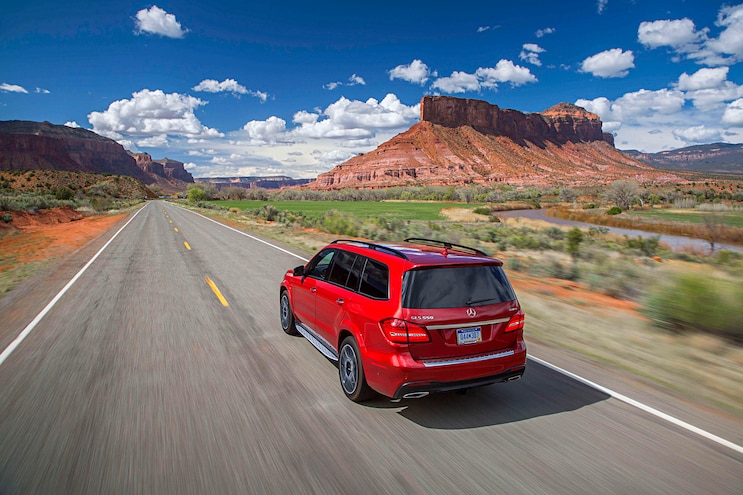 View Photo Gallery | 28 Photos
Photo 7/28   |   2017 Mercedes Benz GLS Drive
Otherwise, the ’17 GLS is a fine-driving upscale people and cargo hauler with excellent second-row room and surprising third-row accommodations, though getting in and out of that far-back seat can be a chore. It's the closest thing in capability to Cadillac's truck-based Escalade ESV and the only "full-fledged seven-seater in the European premium SUV segment," according to Mercedes. An excellent choice if that is what you want or need.