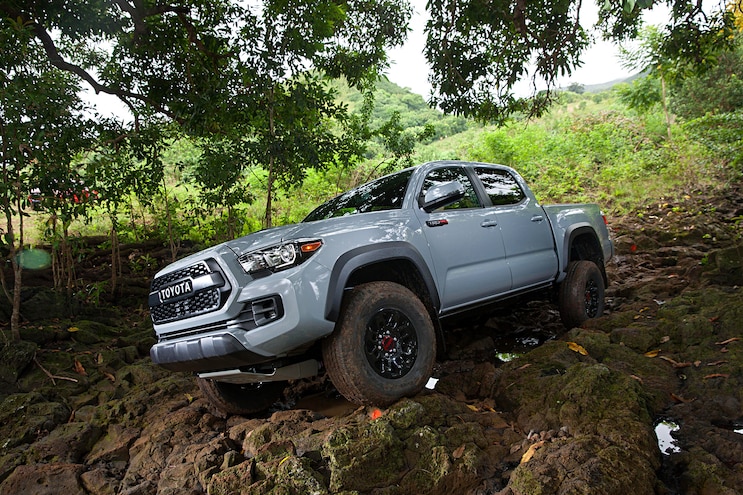 When Ford’s F-150–based Raptor landed in showrooms in late 2009, the pickup industry shifted forever. The factory-built performance off-road truck was an immediate hit, often selling for thousands of dollars more than sticker price and flying off of dealer lots faster than they could even get them off the delivery truck. Up until this point, every pickup manufacturer had a form of “off-road” package, which typically comprised of “upgraded” shocks, skidplates, and stickers at best. These often performed adequately, but left a lot to be desired. However, Raptor was the proverbial game-changer. It proved that the public not only wanted a true desert racing-inspired off-road truck but that they were willing to clamber over each other and spend money hand-over-fist to get one.
Toyota, being no stranger to off-road racing, jumped into the factory performance off-road craze a couple years later, in 2012, with the Tacoma TRD T/X Baja edition. The T/X Baja was a limited edition, with only 1,500 being produced between the ’12 and ’14 model years. These trucks came equipped with 60mm (2.4-inch) Bilstein coilover shocks up front and 50mm (2-inch) Bilstein monotube shocks in the rear. Ride height was increased by nearly 2 inches, and wheel travel increased by 1 inch in the front and 2 1/2 inches in the rear. For ’15 the name changed to TRD Pro and production numbers increased. All of the functional bits remained the same, while a few cosmetic upgrades graced the exterior. Tundra and 4Runner also got the TRD Pro treatment for ’15, rounding out the family of off-roaders.
Tacoma was fully redesigned for ’16, and due to the complexity of launching an all-new truck, we said goodbye to the TRD Pro Tacoma. Fortunately, Toyota isn’t keeping us waiting any longer and has reintroduced and all-new and significantly updated Tacoma TRD Pro edition for the ’17 model year. 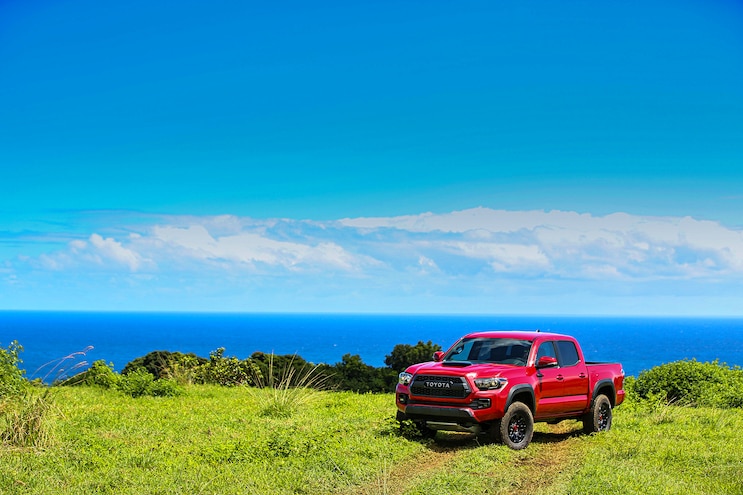 If the ’17 Tacoma TRD Pro looks and feels familiar, that’s because it is. The truck’s frame, cab, bed, and drivetrain are all your typical Tacoma fare. Under the hood is Toyota’s new 3.5L Atkinson Cycle D4S V-6, which churns out 278 hp and 265 lb-ft of torque. Mated to the engine is your choice of six-speed automatic or manual transmissions. If fuel economy matters to you the manual transmission version will net 17 mpg city and 20 mpg on the highway, while the automatic returns 18 mpg city and 23 mpg highway. Four-wheel drive is the only drive option, and the transfer case gives a 2.57:1 low range. Axle gearing is 4.300:1 for manual trucks and 3.909:1 for automatics. For those looking for a smaller truck, we’re sorry: Double Cab is the only option for TRD Pro. 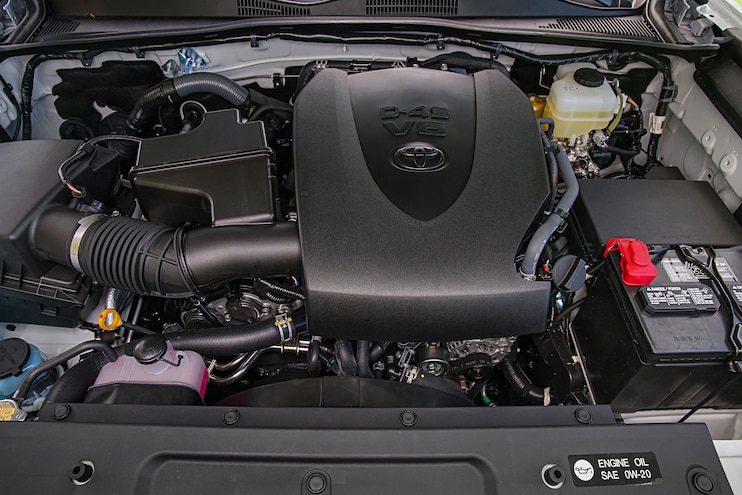 What really makes the Tacoma TRD Pro special is what lies beneath the body. For ’17 Toyota paired up with renowned desert racing shock manufacturer Fox, a departure from Bilstein on the previous TRD Pro Tacoma. The new dampers are 2 1/2-inch internal bypass units that are specifically tuned by TRD for the Tacoma. The shocks feature an aluminum body for impeccable cooling and corrosion resistance; hardened and oversized shafts; and protective and redundant dust boots. The front coilovers use Fox’s Internal Floating Piston (IFP) technology, while the rear utilizes a traditional piggyback reservoir. All of the shocks are position-sensitive, utilizing internal bypass valves that create five compression and three rebound zones in the front and seven compression and four rebound zones in the rear.
TRD-tuned Eibach coil springs provide 1 inch of front lift, while progressive-rate leaf springs from the TRD Off-Road models support the rear. Compensating for the softer shock valving, spring rate, and ride height is a front anti-sway bar that has been increased in size from 28 mm to 30 mm.

Toyota designed the ’17 TRD Pro Tacoma to do two things, off-road well and look good doing it. In addition to the Fox racing shocks, the Tacoma TRD Pro also sports Crawl Control and Multi-Terrain Select, both new on the ’16 Tacoma TRD Off-Road, and Hill Start Assist. Sorry manual transmission fans, these features are only available on the automatic-equipped trucks. Fortunately, regardless of transmission, all TRD Pros also get an electric locking rear differential and Toyota’s Automatic Limited-Slip Differential (Auto LSD) technology. 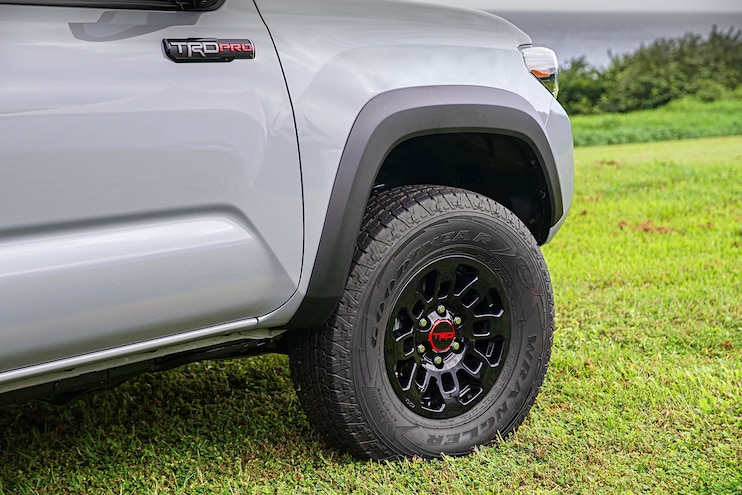 View Photo Gallery | 97 Photos
Photo 4/97   |   2017 Toyota Tacoma Trd Pro Wheels
Goodyear’s Kevlar-reinforced Wrangler All-Terrain Adventure tires in a 265/70R16 size (about 30 1/2 inches in diameter) adorn each corner, along with TRD Pro–exclusive black alloy wheels with an offset designed to increase track width by an inch over the standard TRD Off-Road. Fog lights from Rigid Industries light up the night with ultra-bright LEDs while remaining legal in all 50 states. For those hard hits, a skidplate constructed of ¼-inch aluminum protects the vital bits at the front of the truck. And thanks to its special front bumper and lack of a lower valance, the TRD Pro Tacoma touts an impressive 36-degree approach angle. Departure angle is 24 degrees, with the standard trailer hitch being the first thing to hit, and breakover is 26 degrees, making for a pickup that you can actually take off-road without tearing up the bumpers and rockers.

There’s an old saying that says looks aren’t just one thing, they are everything. We would disagree, but fortunately, in addition to all of the function, the TRD Pro Tacoma has it in the form department as well. On the inside we find heated leather-trimmed seats, which are embossed with the TRD Pro logo. The steering wheel and shift knob are also trimmed in leather, and accented with red stitching. In an interesting love it or leave it move, black is the only interior color option. Outside we find a custom grille, bumper, and black-accented projector headlamps with LED daytime running lights. The TRD Pro’s hood comes by way of the TRD Sport and features a blacked out scoop along with black accent graphics. Out back are black-accented taillights and TRD’s stainless steel exhaust. Toyota is offering the ’17 TRD Pro in three colors: Cement, Barcelona Red Metallic, and Super White. 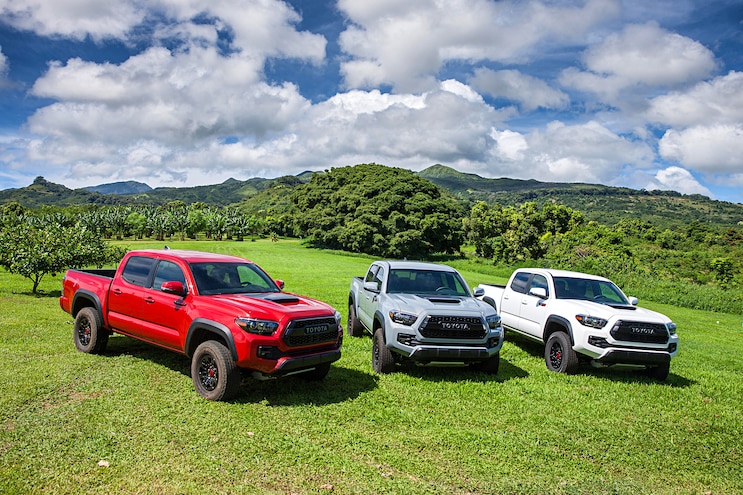 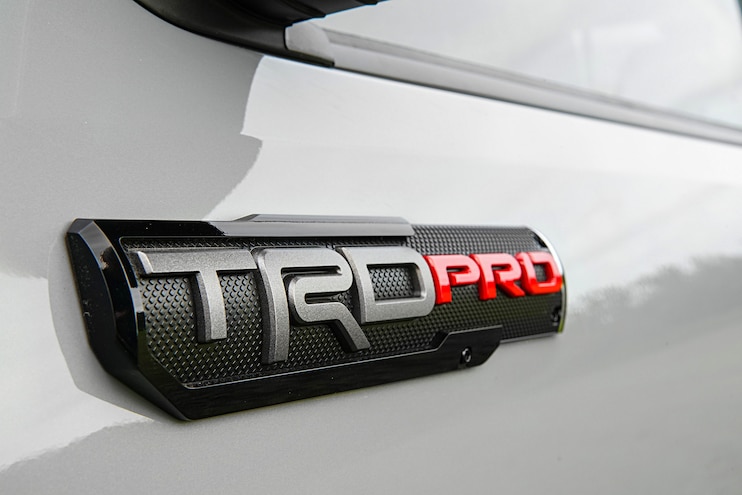 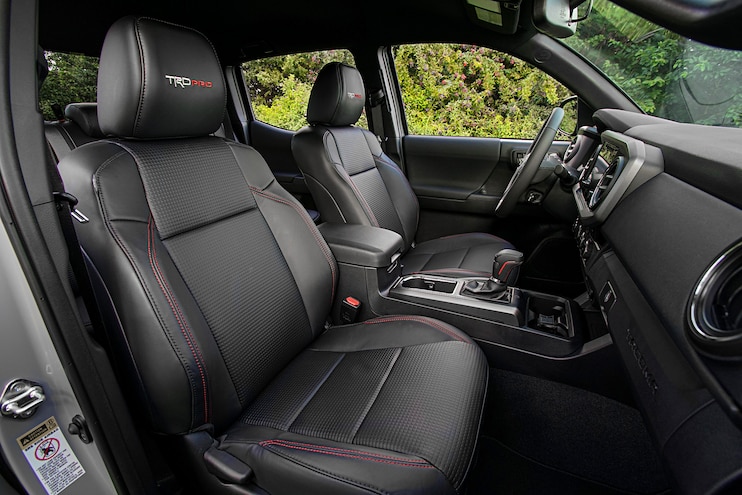 To experience the truck first hand, Toyota flew us out to the land of Tacoma, a place where small Toyota pickups of all generations live in harmony with one another and fill each corner of every parking lot. That place would be the state of Hawaii. At first glance it seems like an odd choice to experience the full breadth of the TRD Pro Tacoma’s capacities, but the lush tropical jungle that is the east side of Maui provided us with mud, ruts, two-track, hillclimbs, and rockcrawling.
We have been big fans of the Tacoma for a long time, and were excited to see the addition of Crawl Control and Multi-Terrain Select on the all-new ’16 model. So it was no surprise to us that using these features is just as seamless and intuitive on the ’17 TRD Pro. For those of us who have been off-roading for decades, giving up control of the brakes and throttle on Crawl Control is still a bit on the unnerving side, but we’re getting over it. The technology behind it is very impressive, and it’s fun to watch the truck take drivers through obstacles that they would never do on their own. Crawl Control can also get you out of trouble if you happen to get the truck stuck on, say, a rock or in the sand. It’s not quite a genie in a bottle, so you can still get the TRD Pro stuck to the point of needing outside help if you really try. The Multi-Terrain Select tailors throttle and transmission response to the desired terrain, to help keep momentum on different surfaces. This we found less useful than Crawl Control, but it’s present nonetheless. 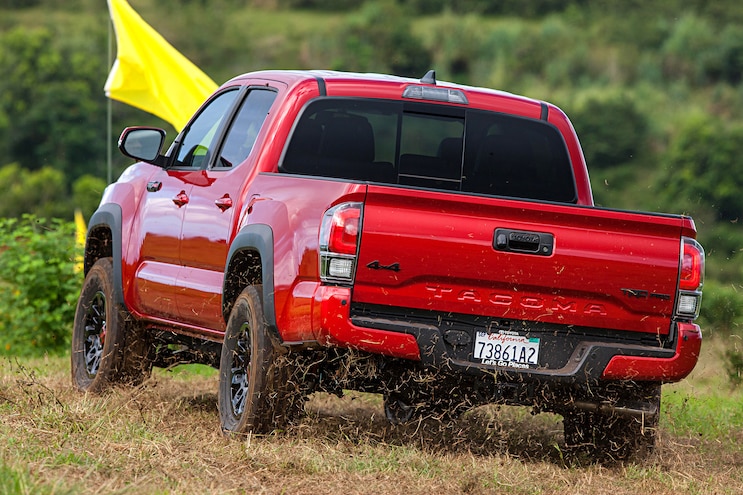 View Photo Gallery | 97 Photos
Photo 8/97   |   2017 Toyota Tacoma Trd Pro Rear
Our biggest grievance against the TRD Pro comes at the expense of the tires. The Goodyear Wrangler All-Terrain Adventure tires are fantastic, don’t get us wrong, and the Kevlar-reinforced sidewalls are a great touch, but they just aren’t aggressive enough for our tastes. A truck of this capability would be better served by sacrificing a bit of on-road comfort for more off-road ability. When we got into slick mud, the All-Terrain Adventure tires couldn’t keep clean and immediately balled up into slicks. We’d love to see a tire more akin to Goodyear’s Duratrac make an appearance on this pickup. Or at the very least return back to the BFG All-Terrain tires that were on the previous generation.
The big star of the show is the suspension, and it is glorious. The mad scientists at Fox and TRD have hit a homerun with the shock tuning, allowing the truck to perform wonderfully over a wide variety of terrains at any speed. While most performance off-road shock tuning sacrifices slow-speed handling for high-speed, the TRD Pro does both well. At speed the truck soaks up the dips, bumps, and ruts, and it rarely bottoms out hard on the jounces. We experienced no noticeable fade or cavitation from the shocks, even after long stretches of hard driving. The suspension remains consistent, smooth, and most importantly, controlled during all off-road maneuvers. Make no mistake: the TRD Pro Tacoma is not a Trophy Truck. You won’t find yourself running 80 mph through 3-foot deep whoops, not for long at least. But you will be able to tackle just about any desert, mountain, or forest trail that you want and do so comfortably. 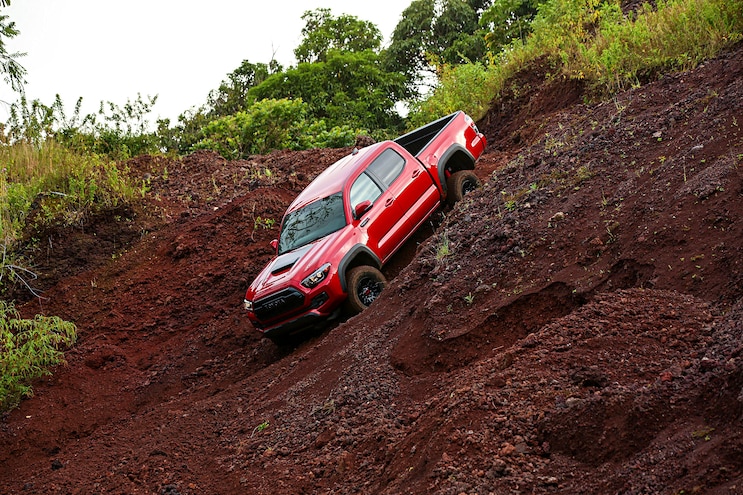 View Photo Gallery | 97 Photos
Photo 9/97   |   2017 Toyota Tacoma Trd Pro Off Roading
Probably the biggest surprise of the day was getting the opportunity to drive a manual transmission-equipped TRD Pro. Up until now we hadn’t had an opportunity to even try out Toyota’s newest six-speed do-it-yourself unit. We’ve got to say that it’s a really good transmission. The shifter feel is phenomenal, and the clutch is very predictable. Despite losing Crawl Control, Multi Terrain Select, and Hill Start Assist, the manual truck was a pure and simple blast to drive. It wasn’t all roses and puppies, however, as the shift knob mimics the look of the automatic shifter. This is great, in theory, until you grip it. The size and shape make for an uncomfortable in-hand feel. And even worse is the loose reverse gate, which let one of our colleagues accidentally shift into reverse when going for a quick downshift to first. That one left him pinching leather when the truck behind suddenly came up on the rearview monitor. Those two aside, the manual truck is pure and simple fun. Toyota won’t build or sell very many of them, about five percent according to the company, but those that do opt for the manual are in for a treat.
The ’17 Tacoma TRD Pro is at dealers now, and you’ll probably see one on the road soon if you haven’t already. Officially the MSRP lands at $40,760 for the manual transmission equipped truck and $42,760 for the automatic. However, we’re already hearing reports of dealers tacking on an upcharge, and actual transaction prices hovering closer to $55K. While that’s a bit too rich for our blood, those that throw down the coin will also get a 36-month/36,000-mile bumper-to-bumper warranty and 60-month/60,000-mile powertrain warranty. Not bad for a truck that’s built to be used.
Toyota has another hit on their hands. This king of the Tacomas has it all: modern good looks, incredible off-road performance, mild highway manners, and Toyota’s legendary reputation. It our short time alone with the truck it won over our heart, mind, and soul. It’s really that good. So if you’re in the market for a mid-size off-roader and aren’t scared off by the price tag, then look no further than the Tacoma TRD Pro.