1961 GMC Suburban Combines the Best of Both Worlds Before you start thinking you know exactly what you are looking at here, give us a chance to explain. This is not just a ’61 GMC Suburban body on an ’05 chassis. It’s also not simply an early ’Burban with a 6.6L Duramax LLY engine swapped into the engine bay. It is in fact one of the most impressive integrations of interesting old sheetmetal, modern diesel power, and modern chassis technology we’ve seen in a long time. This truck was not built by someone who makes a living creating such things. It was developed by Michael Wymer, an amazingly talented fabricator and mechanic who actually pays the bills by building custom homes in Wyoming. And, similar to his discerning customers who demand their vision be executed to perfection in a home, Michael saw to it that his master plan for this build was adhered to in the same uncompromising manner. The end result is a unique rig with classic looks blended with modern, tire-shredding power and great ride quality. 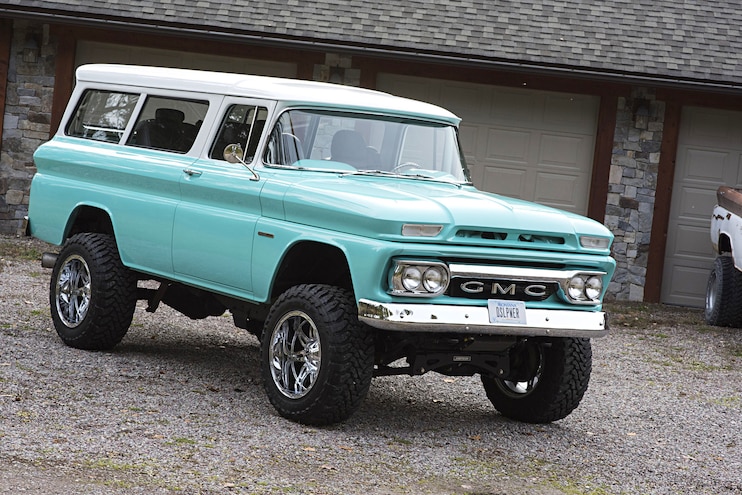 View Photo Gallery | 145 Photos
Photo 2/145   |   There are people who swap a classic body onto a modern chassis and call “close enough” OK. Michael is not one of those people. He shortened the frame of an ’05 GMC Sierra 2500HD 36 inches and moved the rear-wheel openings to make things right.
While Michael’s reasoning for building this truck was pretty straightforward, the process to actually construct it certainly was not. “I set out to build something that is show worthy, but also usable as a daily driver and tow rig to haul my other hot rods and toys to events,” he says. If you are expecting us to start rattling off the names of the shops that did the chassis work, the body modifications, and the paint, you better stop reading now because one man—Michael—built this truck. 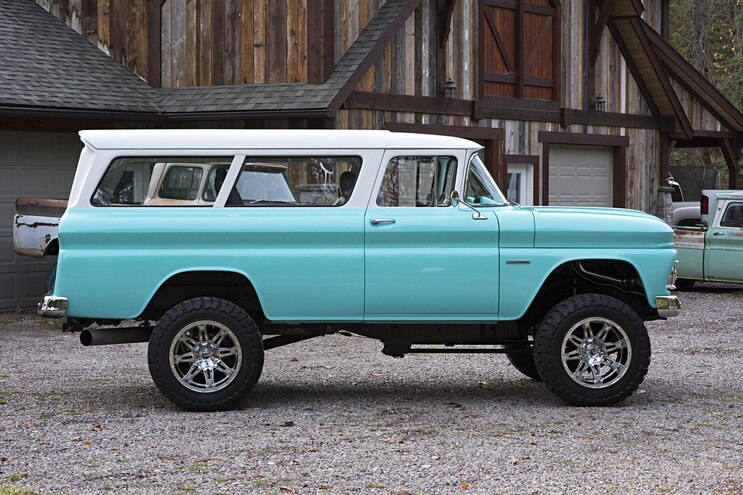 View Photo Gallery | 145 Photos
Photo 3/145   |   The true genius of this build is the extreme detail Michael strove for. From the perfect stance to the packaging of a modern engine in a relatively short-nose truck, he didn’t stop until every aspect of the rig met his high standards.
If you have ever seen a stock ’61 GMC Suburban, you’ll remember it is factory-equipped with very narrow tires that are tucked pretty deeply into the wheel openings. Because Michael’s plan was to use the ’05 GMC Sierra 2500HD chassis, add a suspension lift, and fit the requisite big wheels and tires to complete the look, he knew the effort would be much more complicated than a straight body swap. 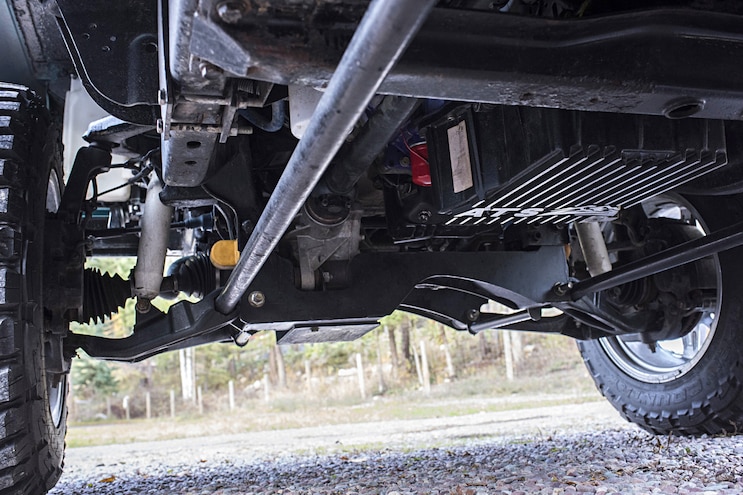 View Photo Gallery | 145 Photos
Photo 4/145   |   Of the impressive things Michael did with this truck, building custom upper control arms and shortening the CV axles to slightly narrow the front track is one of the most detail-oriented. It is a subtle thing that adds to the truck’s perfect presence.
“Modern trucks have a wider track in the front than they do in the rear. So, if I had kept the ’05’s stock front track, the tires would stick out a lot once the body was in place,” Michael says. “I corrected the problem by first adding the lift kit and narrowing the ’05’s front track width with shorter CV axles and custom upper control arms, before I actually tore the ’61 down to the frame.” We told you Michael is a stickler for details and getting things right! Before stripping that truck down to the frame, he made sure the narrowed front-end track was working correctly and that it would be issue free over many miles on the road. 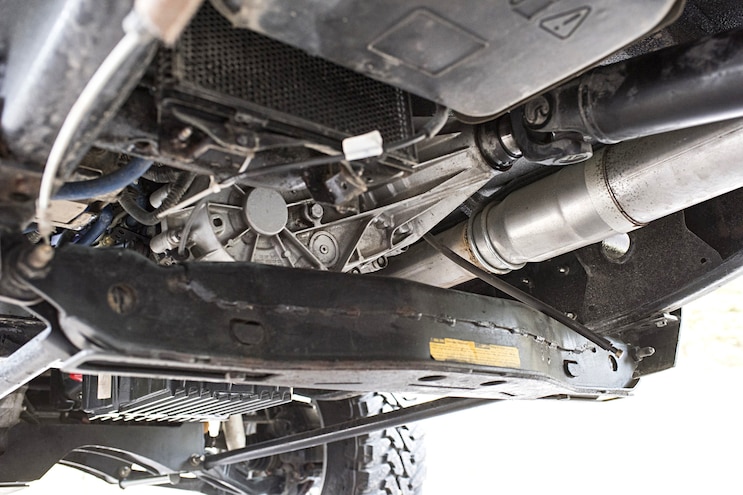 View Photo Gallery | 145 Photos
Photo 5/145   |   No, it doesn’t look at all like 1961 under here, does it? The truck’s mechanical underpinnings are original 2005 pieces, but it isn’t quite that simple. Shortening the frame required shortening brake lines, the driveshaft, and more.
Having two bare framerails made it far easier to remove a 36-inch section to achieve the Suburban’s wheelbase length. “I Z-notched the frame, plated it, welded it, and bolted it back together,” Michael says. “After all that, it is now much stronger than it was when it left the factory.”
It was at this point that Michael started preparing the Suburban’s body-mounting locations and floor. After that was mocked up, he removed the frame, had it sandblasted, and painted the whole thing with rust-proof paint. The next step was to shorten brake lines, fuel lines, the driveshaft, and such. Once the frame was fully prepared, the Suburban body was mounted using the polyurethane mounts from the ’05 truck, which are great for isolating noise and vibration so the ride quality and driving experience are top notch. 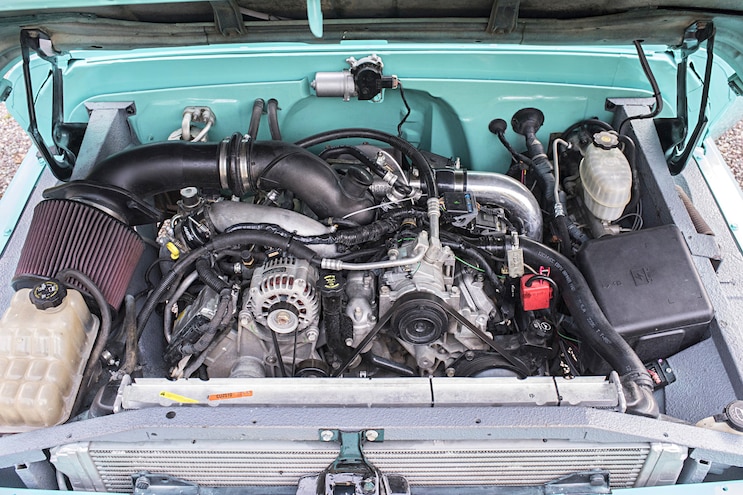 View Photo Gallery | 145 Photos
Photo 6/145   |   This definitely is a busy—but factory-looking—engine bay. While the Duramax was installed with no drama, Herculean efforts were necessary for getting the intercooler and cooling system properly integrated.
Since Michael is a hot-rodder at heart, there was no way he was going to allow the 6.6L Duramax LLY engine to remain stock. A Danville Performance 68mm Stage 2 billet turbocharger kit, Pacific Performance Engineering exhaust manifolds, Industrial Injection 100-percent-over CP3 injection pump, Sinister Diesel high-flow intake tubes, and a Magnaflow 5-inch exhaust take care of the engine’s breathing and fuel. The combination adds up to 427 hp and 754 lb-ft of torque, annihilating tires and chewing up just about anything Michael and the Suburban encounter on the street. 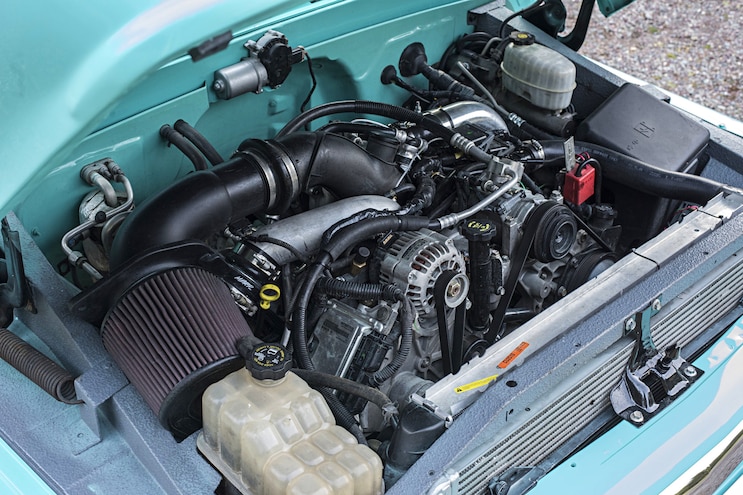 View Photo Gallery | 145 Photos
Photo 7/145   |   The packaging difficulties in the nose of a ’61 GMC are evident here. The lack of space in front of the engine forced Michael to get creative. With no room for a mechanical fan, he used two electric units to move the air. He also reworked the core support.
Getting the large powerplant into the rather confined dimensions of a ’61 Suburban put Michael’s mechanical and planning skills to the absolute test. “This was a huge challenge,” he says. “The nose of the Suburban is very shallow and short in comparison to newer trucks. I ended up rebuilding the entire core support and building the intercooler into it so the engine would fit. Space was so tight I could not reuse the factory fan. Instead, I used two 16-inch electric fans and they do a great job cooling the engine.”
As evidenced in the photos, Michael’s packaging job and work are spot on. Most people would simply hide as many wires as they could, get the Suburban to run, and then live with as many of the functions that will work with the hodgepodged electrical system of a rig that’s more than a half-century old. Michael is not most people. Instead, he stayed true to the path of perfection he had been on throughout the entire build and did it the exceptionally awesome but hard way. 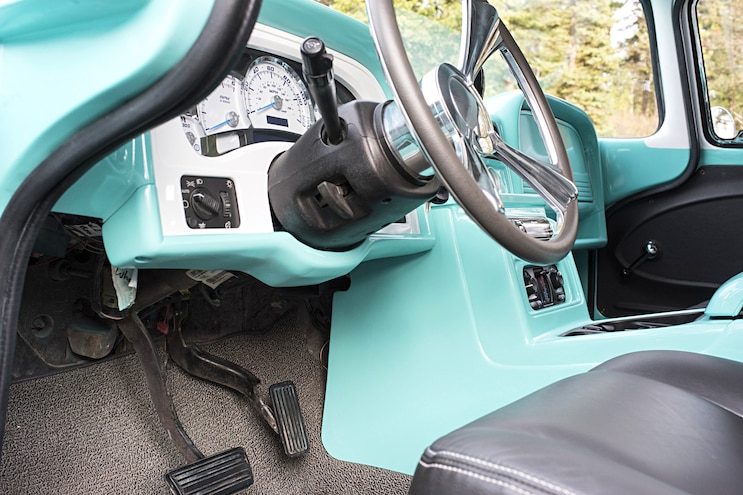 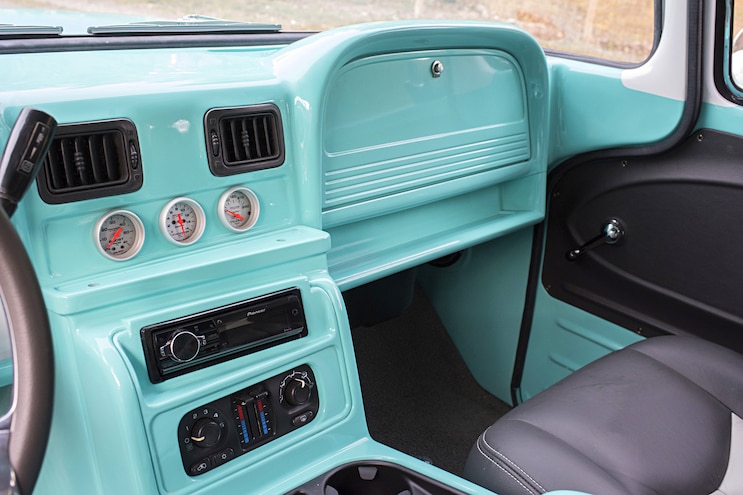 View Photo Gallery | 145 Photos
Photo 9/145   |   Michael is a custom homebuilder by trade, and we think his day job influenced the custom dash he created, which holds the late-model instrument set without looking cluttered or strange.
“I started by mounting an ’05 GMC steering column, gas and brake pedals, and heater core, and then I laid out all the knobs and buttons where I wanted them to go,” Michael says. “When the truck was originally disassembled, I was overly careful not to disturb any of the stock wiring harnesses. It was a very time-consuming process, but when it was all said and done I was able to plug all the items right back in. Because of that, things worked great!”
The final fabrication tasks included moving the rear wheelwell back 3 inches (to center the wheel and proportion the back of the truck), grafting the ’05 fuel-filler door onto the Suburban, and then filling every visible seam on the body with welding wire to achieve a smooth overall look. 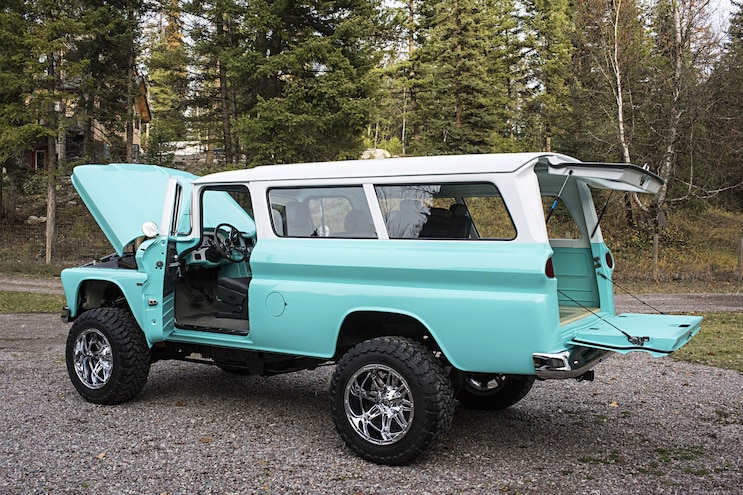 View Photo Gallery | 145 Photos
Photo 10/145   |   With every door open, Michael’s Suburban looks like it is ready for a tailgate party. Michael says he chose the paint scheme because it reminds him of the era when the truck was originally built, 1961. 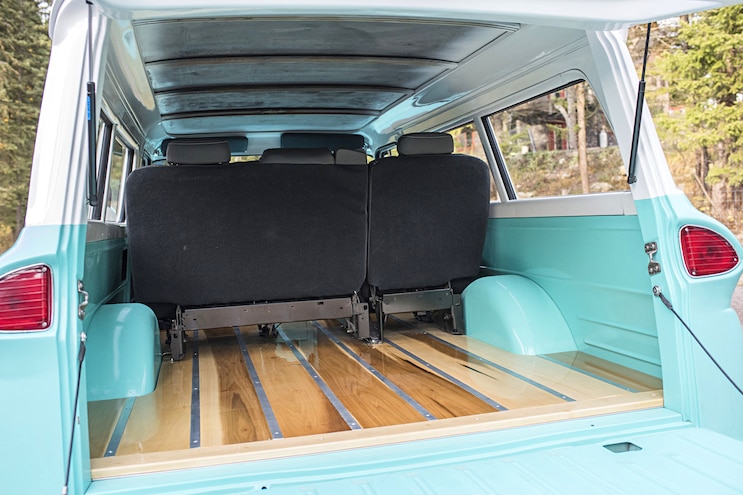 View Photo Gallery | 145 Photos
Photo 11/145   |   The wood decking that serves as the truck’s floor is neat and classy as all get out. With plenty of storage area behind the comfortable, modern seats, this rig is as practical as it is fun.
Michael attacked the paintwork with the same vigor that was used for the rest of the build. “I spent months prepping the Suburban for paint,” he says. “I am always very critical of bodywork and accept nothing less than perfect. I stuck with a ’60s-era turquoise and a white roof because I feel it is iconic of the time period,” Michael says. “People can tell it is an old-school rig coming down the road from a mile away. This truck gets more smiles and waves than any other car or truck I have ever built.” 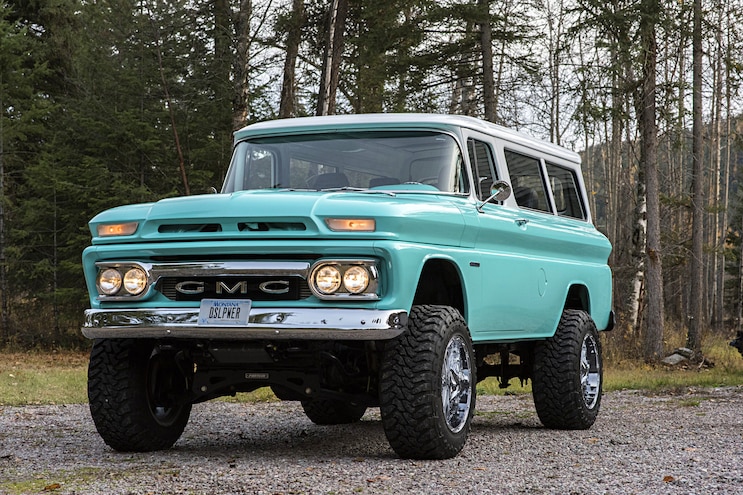 View Photo Gallery | 145 Photos
Photo 12/145   |   With the horsepower and torque of today and the styling, presence, and panache of 1961, Michael has truly created something unique in the diesel spectrum. What makes the whole package sweeter is that he drives it all the time. 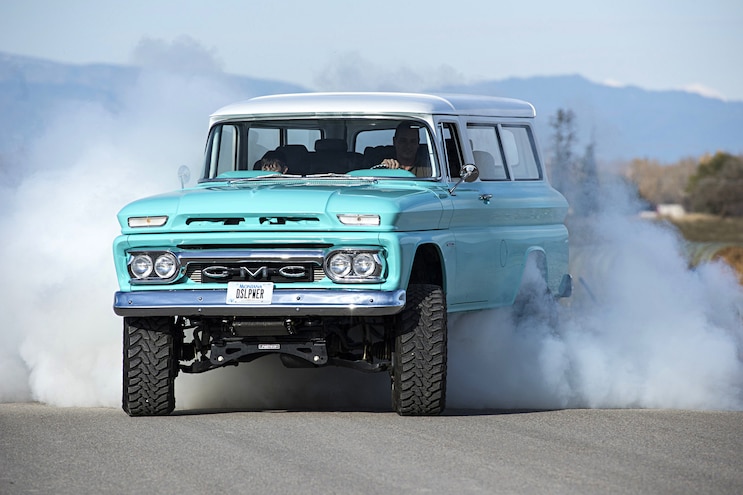 View Photo Gallery | 145 Photos
Photo 13/145   |   With a 6.6L Duramax LLY engine providing 754 lb-ft of torque, Michael Wymer’s ’61 GMC Suburban can quickly turn tires into smoke for as long as he wants to roast them. The truck is an amazing meld of classic looks and modern diesel performance.