A Diesel Excursion Gets the Wicked Touch 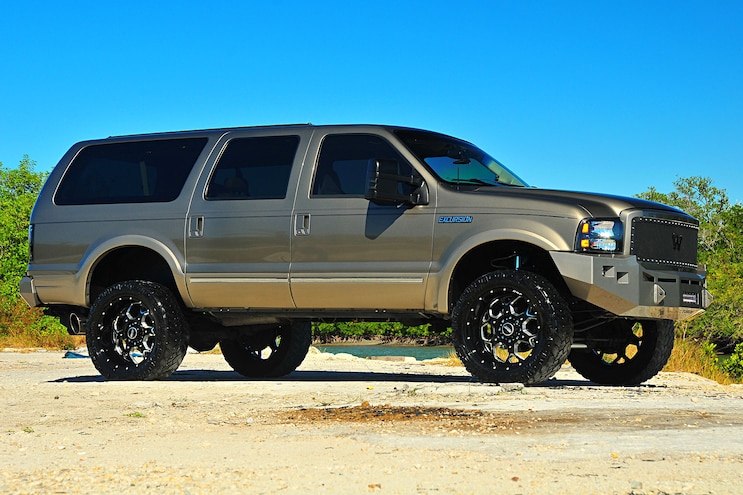 From the Big Apple to the Sunshine State—that’s the path Felix Laquidara took. When his father retired from the police force and purchased a trucking company, Felix took over as the main mechanic, learning to put his talents to use by maintaining a transport fleet for the trucking company. After several years, Felix began looking for a new career path. He met his wife and the two agreed to relocate to Cape Coral, Florida, for new possibilities.
Felix and his wife decided to purchase a hair salon and, within months, it became one of the most popular in the city. With his instilled truck knowledge, Felix began to seek out a good truck for transporting salon supplies back and forth. His first choice was a Ford F-150, but that wasn’t ideal for the rainy season and had limited room inside. As luck would have it, he struck gold when he found his ’02 Ford Excursion Limited at a local car dealership. 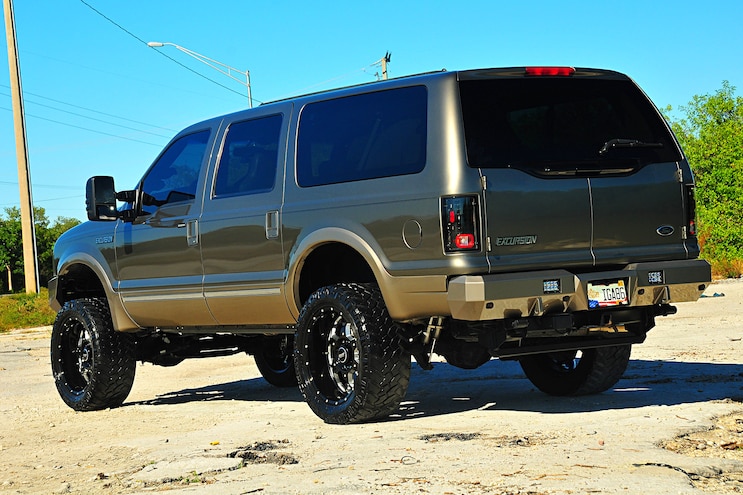 View Photo Gallery | 71 Photos
Photo 2/71   |   2002 Ford Excursion Goldilocks Rear
After purchasing the daily diesel, Felix began looking through magazines to find different ways to make his already-unique Ford stand out even more. While browsing through the pages of 8-Lug magazine, he saw a custom shop located fairly close to him called Wicked Customs in Naples, Florida. Shop owner Jordan Tadysak met with Felix, and with a set plan, the professionals at Wicked got down and dirty transforming the stock Excursion into something worthy of the shop’s reputation. 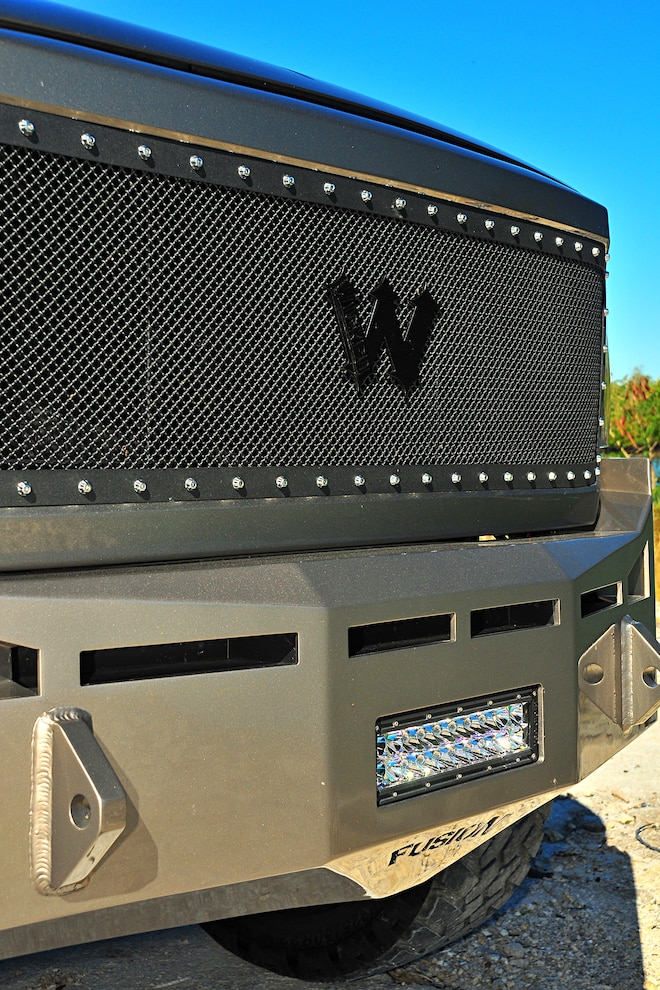 View Photo Gallery | 71 Photos
Photo 3/71   |   2002 Ford Excursion Goldilocks Front
A 2.5-inch Wicked suspension lift with chrome Wicked reservoir shocks made for an appropriate front-end stance, while a brushed Wicked steering stabilizer and an SSBC big brake kit rounded out the front. A Kelderman air suspension utilizing two Viair compressors was installed for even more lift. The body was drastically transformed via Fusion color-matched front and rear bumpers with Rigid LED lights and custom enclosures lighting up the new inserts. An ’05 grille shell was color-matched, with the Wicked touch adding a “W” in the center of the grille. The Excursion was updated with ’05 Harley-edition headlights and ’10 working power mirrors with Recon LED markers. The door handles were given the billet touch and color-matched for a seamless blend. IPCW LED smoked taillights were added and Hornblasters train horns rounded out the build. A crucial step was adding wheels and tires that would complement the Excursion perfectly. The combo of choice was 22x10.5 BMF SOTA Death Metal black wheels with 325x50R22 Nitto Trail Grappler tires and West Coast lug nuts. 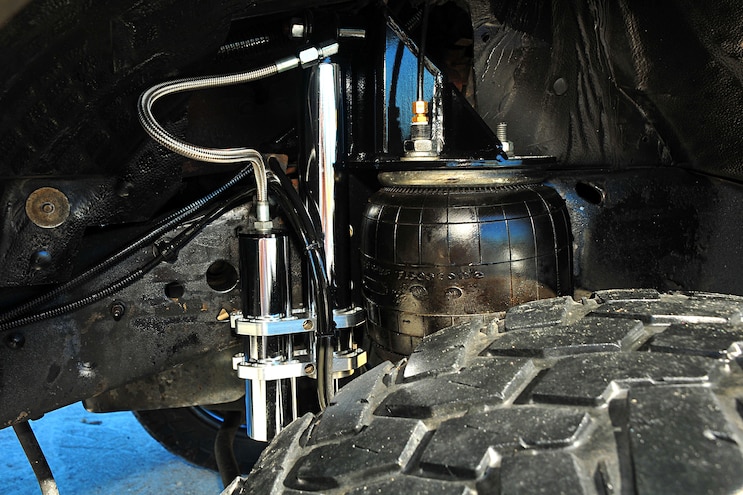 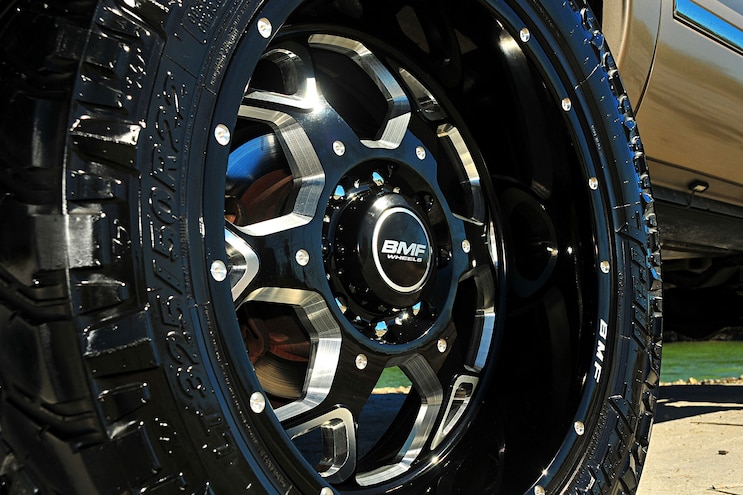 View Photo Gallery | 71 Photos
Photo 5/71   |   2002 Ford Excursion Goldilocks Wheels
Inside the Ford, Mario and James from Audio Interventions installed a Sony head unit with an Alpine backup camera. Hertz components were mounted, powered by JL amplifiers throughout. A built-in Passport radar was installed along with added features, including an Auto Meter gauge pod and a volt gauge. 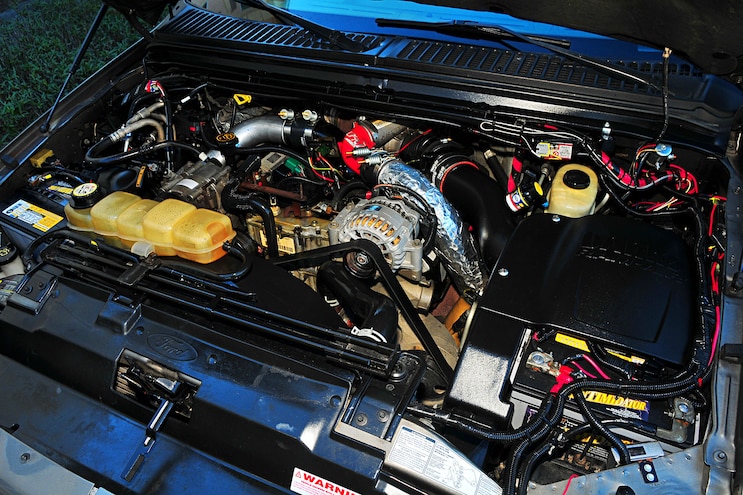 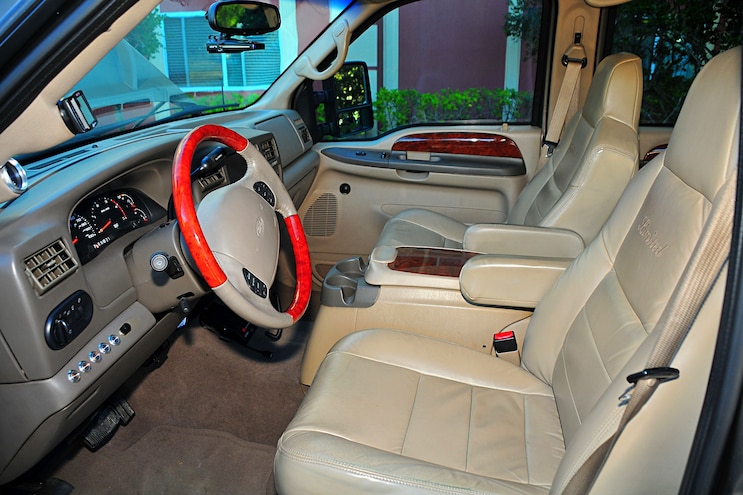 View Photo Gallery | 71 Photos
Photo 7/71   |   2002 Ford Excursion Goldilocks Interior
With the success of his salon business, Felix was able to purchase two more hair salons in the Naples, Florida, area. The help from Wicked Customs and the leadership and business prowess of Felix became a very good combination in the GoldiLocks build. “I want to thank Jordan from Wicked Customs for his creativity and the quality of work he performed, James and Mario from Audio Interventions for the great sound system and alarm (soldering every wire instead of crimping), and, of course, 8-Lug magazine for giving me a forum to display my truck.”