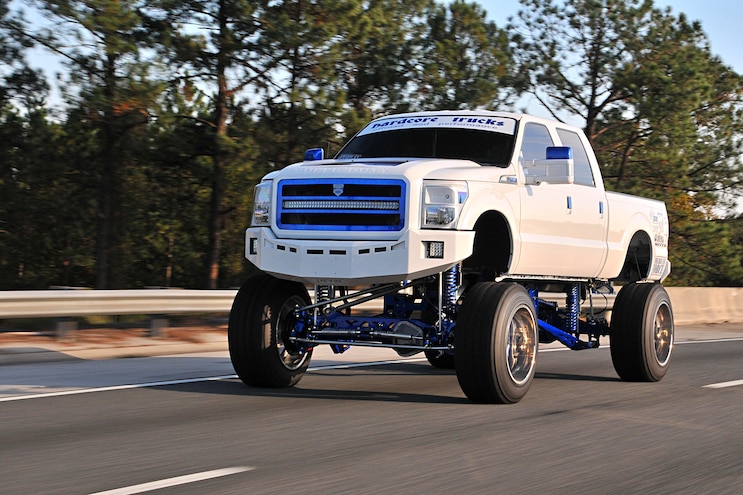 There are lots of reasons to build a cool custom truck, but one of the best is realizing your old reliable daily driver could be a career booster! Kirk Cole and his brother Kyle are longtime truck enthusiasts, working on their own vehicles for years and always helping friends. Those friends spread the word, and it wasn’t long before their talents were recognized with more and more potential customers intrigued by their creativity. Realizing they had the perfect opportunity to turn an avocation into an occupation, the brothers opened Hardcore Trucks Offroad and Performance in Dunedin, Florida. Now in their eighth year, Kirk and Kyle, along with two employees, see an average of 50 vehicles a month, with upgrades ranging from mild to wild. One of the business turning points came after the SEMA show in 2015 when they hit upon the idea of converting Kirk’s ’04 Ford F-250 daily driver into a truck worthy of being displayed at the November 2016 SEMA show. The complicated undertaking began with contacting American Force in Miami, which agreed to display the completed truck in its booth. 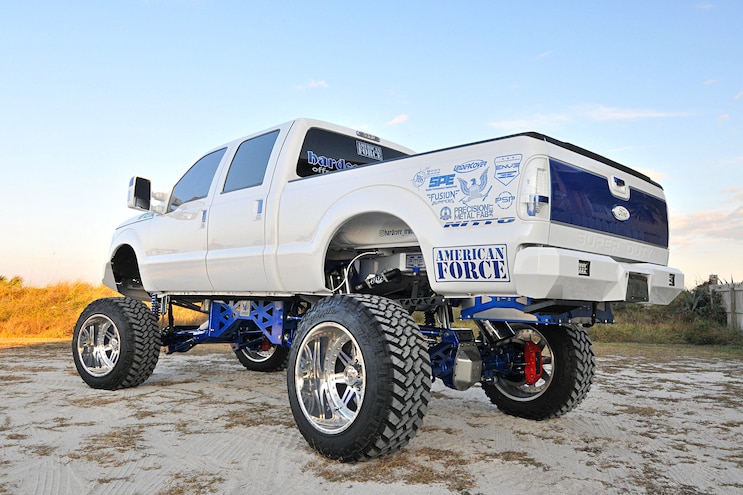 View Photo Gallery | 57 Photos
Photo 2/57   |   2004 Ford F250 Cole Rear
The rejuvenation process on the big Ford began with all-new ’15 sheetmetal. The rotisserie-prepped cab was treated to a late-model front end and bed. Jim’s Body Shop in Seminole, Florida, went to work on the body and paint while the Hardcore team tackled the new chassis. Since big go-power was on the agenda, big stopping power was equally important. They chose an ’06 frame and axles to accommodate the large Wilwood six-piston caliper brakes. Custom touches on the chassis included filling all the holes and grinding the welds smooth, then painting it GM Switchblade Silver. The all-new 17-inch Pre Runner Trailing Arm kit from Precision Metal Fab holds the pair of Ford axles, fitted with 4.56 gears and stabilized by Fox 2.5 Factory Series coilovers and Fox 2.5 bypass shocks. PMF added to the sophistication by creating the custom-made steering setup and 34-gallon fuel cell. With SEMA-quality additions in mind, everything underneath was powdercoated by Profab Customs Powder Coating & Hydrographics in Clearwater, Florida. The truck became a roller thanks to 24x16 American Force Bond MP8 wheels wrapped in 40x15.5R24 Nitto Trail Grapplers. 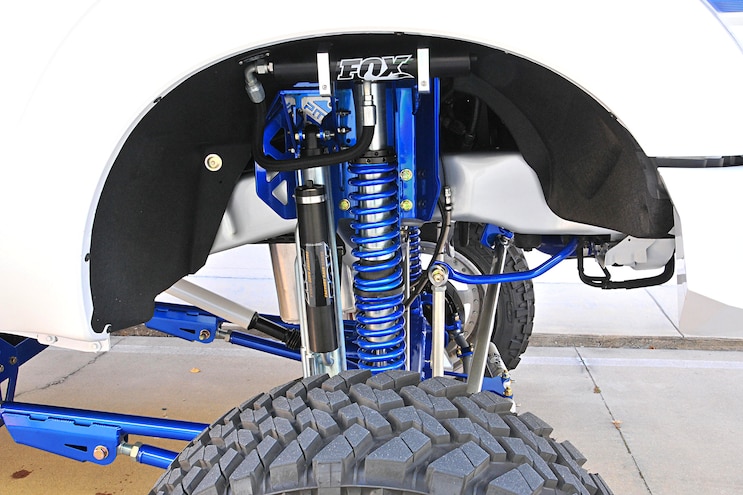 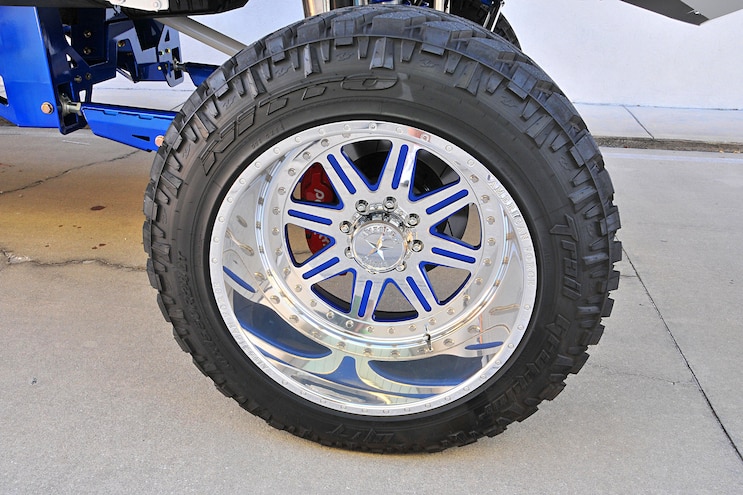 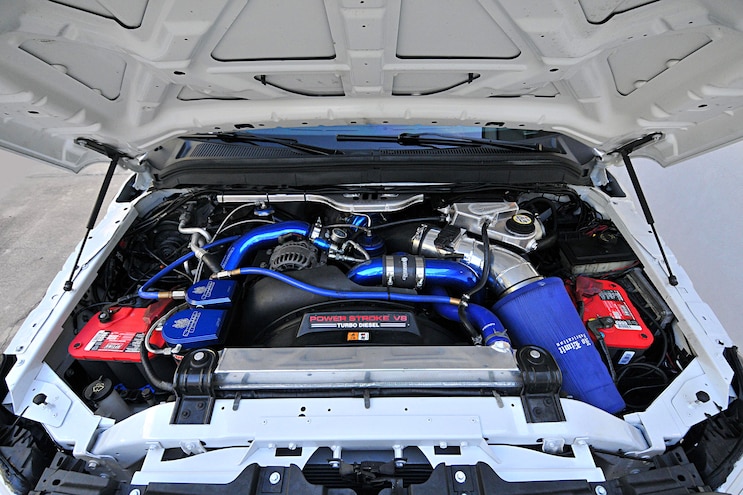 View Photo Gallery | 57 Photos
Photo 5/57   |   2004 Ford F250 Cole Engine
More than just another pretty face, this truck hauls. Its original 6.0L Power Stroke diesel was treated to a host of upgrades, beginning with a Barder Stage 3 68mm turbo, No Limit Fabrication cold-air intake kit, and Mishimoto intercooler equipped with Sinister Diesel charge pipes. The WPE Stage 2 ported intake manifold uses ARP studs and runs175/75 Warren Diesel injectors. Fuel needs are supplied by an Aeromotive A1000 fuel pump and AirDog 150-gph lift pump. Dumping spent gases, the ceramic-coated exhaust manifold is connected to a polished 5-inch MBRP pipe ending in a huge 8-inch tip. PSP Diesel supplied the deep sump aluminum oil pan along with its aluminum degas bottle and aluminum wire loom. Gearhead Automotive Performance added icing to the cake with a custom SCT tune. It hasn’t been dyno’d yet, but it is estimated to produce approximately 600 hp. The 150-shot bottle from Nitrous Express in the bed is just the ticket to keep the neighborhood Honda boys in line! Snyder Performance Engineering was in charge of ensuring the fully built transmission could handle the power, now fitted with billet internals, a DPC billet torque converter, and a Mag-Hytec pan. 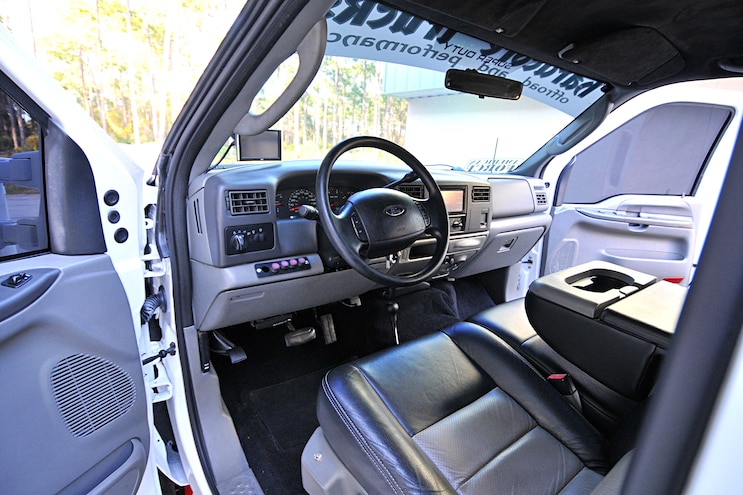 View Photo Gallery | 57 Photos
Photo 6/57   |   2004 Ford F250 Cole Interior
Even though the November SEMA deadline was fast approaching, lots of details were still on the list for both interior and exterior upgrades. The lighting package included a 40-inch Rigid Industries lightbar in the Enve grille, Q-Series foglights, and 4-inch backup lights. Paint-matched Fusion bumpers enhanced the truck’s rugged looks. At night, the big Ford has 30 Rigid black lights that create an eerie glow, transforming the lifted Ford into an earthbound UFO. After the bed was tricked out with a BedRug and Undercover Flex tonneau cover, Jim’s Body Shop wrapped up the exterior by spraying a custom-mixed House of Kolor Blue Lightning Pearl with Metajuls Effect Pac in the clear. Hairy Plotter Designs handled the sponsor decals. 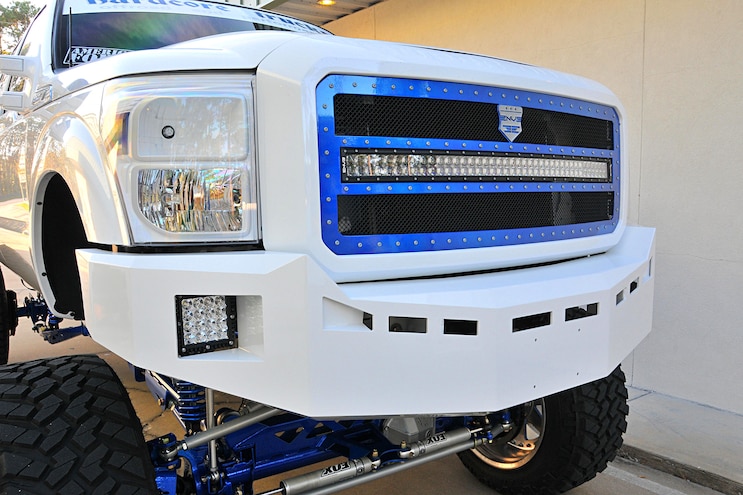 View Photo Gallery | 57 Photos
Photo 7/57   |   2004 Ford F250 Cole Front
Moving inside, the truck becomes the perfect road trip ride thanks to Katzkin black and gray upholstered seats and a black suede headliner. The Pioneer head unit and pair of Alpine amps power the Rockford Fosgate 6x9 door speakers and the pair of 12-inch Phoenix Gold subs located in a custom enclosure behind the rear seat. An Edge CTS2 monitor on the dash keeps track of underhood activity. We all know timing is everything, and in this case, it was crucial. With the lift kit parts not arriving until mid-August and the coilovers not showing up until the Wednesday before the show, there were lots of late nights—but the end result was worth it. Kirk’s daily driver was proudly displayed in the outdoor American Force both at SEMA. Kirk says, “The show itself was overwhelming. There was so much to see, and we especially loved the SEMA Cruise and SEMA Ignited after party.” Back home, Kirk’s daily driver has now become the shop showpiece, a rolling calling card that showcases the talents of the Hardcore Trucks Offroad and Performance team. It’s also the perfect weekend transportation for Kirk, his wife Erin, and their young son Easton, who is always eager to help his dad polish the big family ride.