Looking Back: A History of the Nissan Pathfinder

Here is a brief history of the Pathfinder, leading up to the fourth generation in 2013. 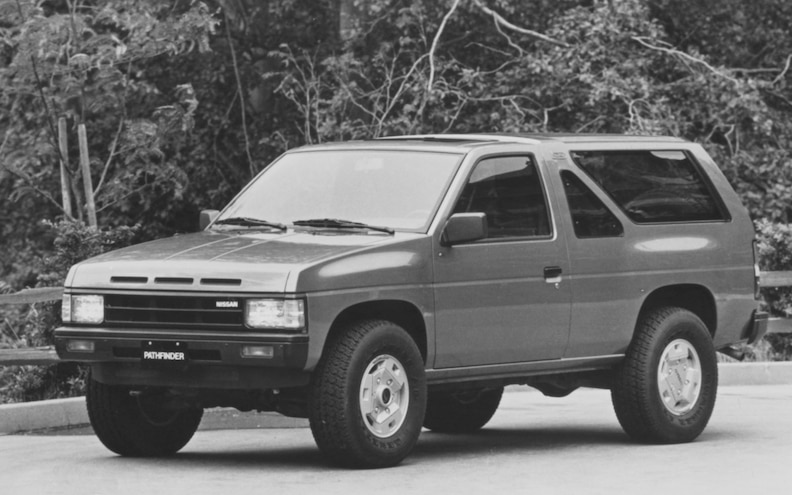 When Nissan decided to build a sport/utility smaller than the Patrol (and, unlike the Patrol, sold in the U.S.), it saw an opportunity to use its Hardbody truck as the platform for the new SUV. By 2013, the wheelbase will be nearly 10 inches longer (based on the dimensions of the JX) than when the Pathfinder first went on sale, and overall length will have increased by 2 feet. Here is a brief history of the Pathfinder, leading up to the fourth generation in 2013.
First Generation 1986-1995
When the Pathfinder first came out, it was a two-door sport/utility based on the Hardbody compact pickup platform. It was a body-on-frame model, and, like the first Toyota 4Runner that came out a year earlier -- as a 1984-1/2 -- it was a two-door. It received two more doors in 1990, and has been a four-door ever since. The Pathfinder was powered by either a 106-hp, 2.4-liter four or a 145-hp, 3.0-liter V-6. The four-cylinder base engine was eventually dropped and the V-6's power went up to 153.
View Photo Gallery | 38 Photos
Photo 2/38   |   First Generation 1987 Nissan Pathfinder Front Three Quarters
Second Generation 1996-2004
While it might seem the upcoming 2013 unibody model is a big departure, the second-gen Pathfinder was a unibody as well. The appearance of the 1996-2004 SUV was a significant change, with more rounded exterior lines. The engine was upped to 3.3-liter displacement, good for 168 hp. This was designed to be a more refined vehicle than the truck-based first gen, and got bigger in size as well. Lux options included DVD entertainment and satellite radio. In 2001, power went up again, in the form of a 3.5-liter engine and 240 horses.
View Photo Gallery | 38 Photos
Photo 9/38   |   Second Generation 1997 Nissan Pathfinder Front View
Third Generation 2005-2012
For its third generation, Nissan returned the Pathfinder to its truck roots by making this iteration of the vehicle body-on-frame again. This is the current generation of the model, and its styling went from faux luxe to bigger and boxier. During Generation 2, both the Xterra and Pathfinder Armada joined Nissan's sport/utility lineup. The styling of the Pathfinder slotted in between the two, falling between the rounder, larger, upscale Armada (the "Pathfinder" part of the name was quickly dropped) and the smaller, off-road-biased Xterra. All three are based on versions of the company's truck platform (Titan, Frontier), which can be configured for various vehicle widths and lengths. This generation marked the first time the Pathfinder was available with three-row seating. Its power comes from a choice of two engines. It was introduced with a 270-hp, 4.0-liter V-6, much like that in the current Xterra. In 2008, a V-8 was made available for the first time. It is a 310-hp version of the Nissan Titan/Armada's 5.6-liter V-8.
View Photo Gallery | 38 Photos
Photo 16/38   |   Third Generation 2006 Nissan Pathfinder
Fourth Generation 2013 and up
In some ways, the fourth generation of the Pathfinder follows the pattern we've seen in the model's lifespan. The generations seem to alternate between prioritizing trucklike, rugged ability, and focusing on making a luxury unibody vehicle. So far, Nissan hasn't offered up too many specific announcements about the production version of the new Pathfinder; it has only shown a concept. However, the new model will share platforms with the Infiniti JX (much like the platform sharing that happened with the Infiniti QX4 and the second-gen Pathfinder), and should prove more refined, larger, and more fuel-efficient. Nissan hasn't yet released fuel-economy numbers on this vehicle, but expects a 25-percent improvement. No V-8 has been announced, and we figure the V-6 engine will be similar to the JX's 265-hp, 3.5-liter V-6.
View Photo Gallery | 38 Photos
Photo 23/38   |   Nissan Pathfinder Concept Side In Motion