This Gator Has Some Teeth 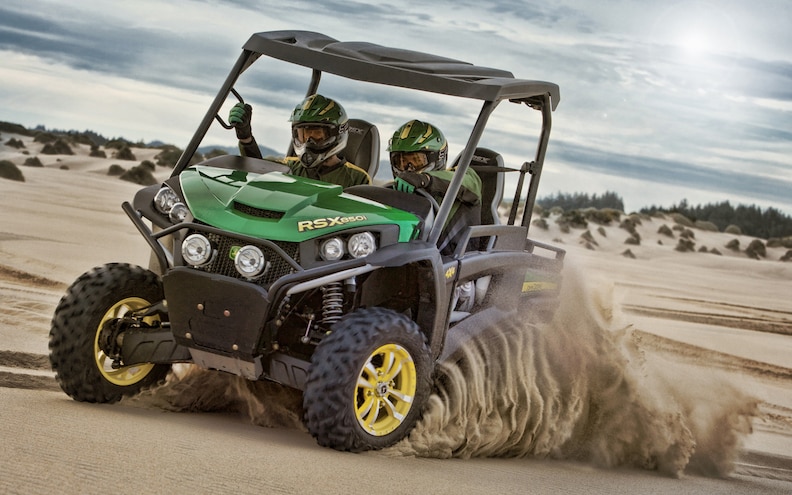 John Deere is traditionally known as a maker of agricultural machinery and construction equipment, and for most of its 175-year history, has enjoyed a comfortable business catering to those market segments. But in the past few years, its utility vehicle division has been more akin to a startup, in that John Deere is entering market segments and niches that it hasn't competed in before.
True, John Deere was one of the first into the utility vehicle segment with the AMT in 1987, but it's important to look at the evolution of the utility vehicle segment. In the early days, the segment was defined by straightforward, utilitarian machines that emphasized basic function and capability over performance or power. But with the introduction of models such as the Yamaha Rhino in the early 2000s, followed by the Polaris Ranger and later the RZR performance variant, as well as newer competitors such as the Kawasaki Teryx, Arctic Cat Wildcat, and Can-Am Commander, recreational utility vehicles have become an increasingly important segment, one that John Deere wants to be a bigger player in.
View Photo Gallery | 15 Photos
Photo 2/15   |   John Deere Gator RSX 850i Front View
The first indication of Deere's interest in the more recreational side of the business came with the 2011 Gator line of so-called "crossover" utility vehicles. These tweeners straddled the line between the Gator's more traditional utilitarian role and the more aggressive look and features of the more recreationally oriented side-by-side models. Although well received by dealers and consumers, the company continued to receive feedback from customers that wanted a more aggressive, more fun option with more power and greater agility. What you see here is the result of that feedback: the 2013 John Deere Gator RSX 850i.
View Photo Gallery | 15 Photos
Photo 3/15   |   John Deere Gator RSX 850i Front View In Motion
The RSX isn't simply a nip and tuck of the 2011 crossover models: It's an entirely new chassis focused on the recreational user. As such, it's narrower than the crossover models (56.5 inches wide), compared to the 62-inch width of the crossover models. Overall length of both models is the same at 119 inches. The RSX also is significantly lighter than the Gator 825i crossover utility, coming in at 1360 lb, 270 lighter than the 825i. However, that's still 170 lb heavier than the RZR 900 and 65 lb heavier than the Can-Am Commander 1000. Its starting price of $13,099 is slightly higher than that of the Commander 1000, but quite a bit less than the RZR XP 900. The topline Sport model, like the one we tested, checked in at $16,049.
The RSX also gets an all new engine sourced from Italian scooter and powersports giant Piaggio. Displacing 839cc, the overhead-valve V-twin produces 62 hp and 57.5 lb-ft of torque, compared with the 50 hp and 47 lb-ft of the 825i's Chery-sourced triple. The character and personality of the two engines could not be more different. Whereas the three-cylinder in the 825i makes a coarse moan characteristic of triples, the staccato blat of the V-twin gives the RSX a distinctly aggressive personality. That personality is further emphasized by the RSX's punchy low-end torque, shooting it out of the hole with a snappy 0-to-30 time of three seconds flat. However, the throttle response could be a tad on the touchy side at times, an attribute amplified in low range, making precise throttle modulation tricky when negotiating technical lines on the trail, often resulting in indelicate lurches. An electronically controlled throttle could give the driver a more gradual throttle map in low range, but would also add to the cost.
View Photo Gallery | 15 Photos
Photo 10/15   |   John Deere Gator RSX 850i Front
The trails in Moab selected by Deere for us to test the RSX favored rock-crawling and technical maneuvers as opposed to the wide-open throttle dune riding that's more characteristic of deserts in the Southwestern U.S. The RSX bounded over the red rocks, and went through the periodic sand esses with ease, easily transitioning between the terrain changes without feeling awkward or caught off-guard. The 9-inch wheel travel and Fox Racing shocks struck the perfect balance between lower-speed articulation and high-speed control.
View Photo Gallery | 15 Photos
Photo 11/15   |   John Deere Gator RSX 850i Top View
The engineers and product planners hinted that there could be more in store, as well. When asked about the possibility of a four-passenger version, along the lines of Ranger RZR 4, Deere staff pointed to the recently-introduced Gator XUV 550 S4 as a possible direction for a future high-performance variant.
As aggressive as the RSX is for Deere, it's far from the most extreme side-by-side on the market. For that, look to Polaris' Ranger RZR XP 900, with its 88 hp and 73 mph top speed, or the Can-Am Commander 1000's nearly 1000cc engine with 85 hp and a 70-plus-mph top speed. By comparison, the RSX 850i tops out at a rated 53 mph. But for a newcomer to the side-by-side market looking for a fun, capable, sturdy vehicle, the RSX is worth consideration.
View Photo Gallery | 15 Photos
Photo 12/15   |   John Deere Gator RSX 850i Front Grill View