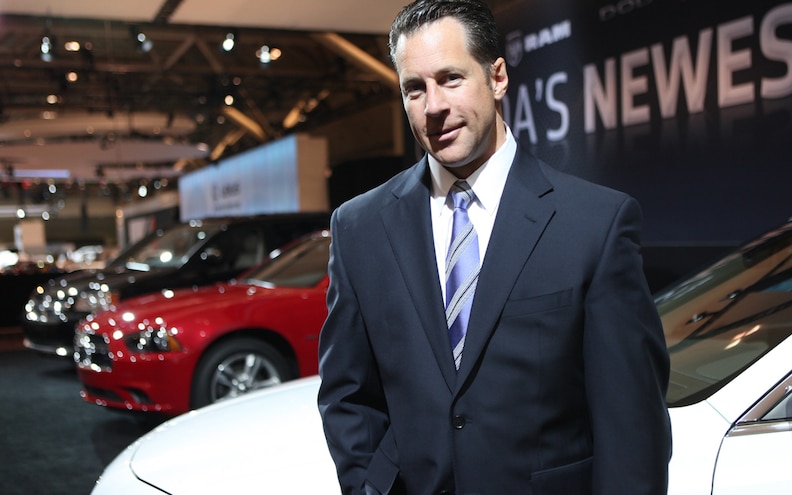 The new CEO and president of Ram and head of U.S. sales was too busy answering a dozen reporters' questions to do more than pick through his salad. The fish entrée was returned completely untouched.
Obviously, there's a lot to talk about.
Bigland, who took over as Ram's top executive in April after former Ram president Fred Diaz moved over to Nissan, covered an array of interesting topics ranging from the continued growth of the American pickup segment and new diesel 1500 coming to the possibility of more high-end trucks and why a true small pickup just doesn't add up in America.
View Photo Gallery | 32 Photos
Photo 2/32   |   Reid Bigland CEO Ram Trucks
Here are some of the topics Bigland covered:
Ram Sales
For 38 consecutive months, the Ram pickup has seen continued growth in sales. That's three years and still counting. Sales are up 18 percent for 2013 and retail sales are up 33 percent this year, as the brand tries to wean itself off less profitable fleet sales.
"I still think the pickup segment has a lot of room to grow," said Bigland, pointing to the relatively low number of housing starts and other indicators that typically coincide with pickup sales. As the economy continues to improve, and truck buyers seriously consider replacing their older pickups, there's room for more growth.
Meanwhile, Ram continues to show a rosy outlook for sales with a fresh lineup and continued improvement to its vehicles, including class-leading towing ability and segment-high 25-mpg highway number.
View Photo Gallery | 32 Photos
Photo 3/32   |   Reid Bigland CEO Ram Trucks 07
New pickups coming
Ram's critically acclaimed pickup (it was Motor Trend's Truck of the Year in 2013) will also receive additional improvements in the coming years. Gone are the times where a pickup could remain static for years. It's essential to continually improve them, year and after year.
Within the next 12 months, Ram will offer a 1500 model with a 3.0-liter V-6 diesel engine. It's the same engine going into the Jeep Grand Cherokee, but will have different tuning. It will be the only half-ton truck by any manufacturer to have a diesel engine under its hood.
Bigland said it could bring new people into the Ram family.
"Diesel enthusiasts have embraced the technology and see its benefits," he explained. Furthermore, the diesel Ram will beat the current segment-leading 25-mpg highway number in the gasoline-powered Ram with a Pentastar V-6.
Bigland added there's potential for new high-end Rams like the Laramie Longhorn, though he declined specifics. "I don't even know where the ceiling is on higher-end trucks," he noted. "People love to load up their trucks."
"A lot of people like to know the capability is there, whether or not they use it."
Still no future for a small pickup
While many have clamored for a true small pickup, it does not look as if a little Dakota is in the works.
"The theory is pretty good," Bigland said of a true midsize or small pickup. Build something with moderate capabilities, good gas mileage and a low starting price.
View Photo Gallery | 32 Photos
Photo 13/32   |   2014 Ram 1500 Diesel Side
"I get it, something to carry some dirt or mulch and have a $16,000 price tag."
The problem, Bigland continued, is that, with all the required safety features and expected creature comforts, the math doesn't add up for a small pickup. The average transaction price of a compact Dodge Dart, the right-size platform for a little pickup, is $22,000. At that price, a little pickup doesn't make as much sense because a much bigger and more capable Ram is available.
"I can buy into the vision," Bigland said, "but when I crunch the numbers, I don't see it."
Fans of vans
As Ram begins to field its ProMaster utility vans, similar to the Mercedes Sprinter and Ford Transit, Bigland sees potential growth.
Currently, Ram has less than 15 percent of the utility van market. The new ProMaster, which will be in dealerships over the next three months, will build Ram's fledgling commercial business, a key area for Ram's growth.
View Photo Gallery | 32 Photos
Photo 14/32   |   2014 Ram 3500 Front End
Built on the Fiat Ducato platform, the ProMaster offers a lot of utility, a higher roof than some of its competitors, and a raft of suppliers ready to configure a van in any way a customer might want.
"It's a proven performer in Europe," Bigland said.
The smaller Fiat Doblo van will hit American shores within the next two years as the ProMaster City to take on Ford Transit Connect, Bigland added.
Time to buy
Bigland, who heads U.S. sales for Chrysler, notes that the economy has gotten better but there's still a lot of room for improvement. However, with interest rates at record low levels, there's never been a better time to buy a new vehicle.
Credit has once again become easier to get for many customers and banks appear more willing to offer a person a vehicle loan than a home loan. "From a bank's perspective, car loans are safer," he said. "People are more likely to pay their car loan before their home loan."
Additionally, he notes that banks can repossess a car after 30 days for nonpayment, but home foreclosure can take years. Cars also provide more utility. "You can sleep in your car, but you can't drive your house," he said.
In the meantime
With the launch of the ProMaster underway and the expansion of Ram's business customers, Bigland says that the brand was left in good shape by Diaz. Additionally, many of Ram's factories are working at full capacity, which is always good from a manufacturing standpoint.
"Right now, I have to focus on execution," Bigland explained. "You only get one time to make a good first impression."

- OF
By Scott Burgess
58 Articles