Hardcore Testing Included Baja Racing and a Road Trip. Ford tested the aluminum F-150 at the Baja 1000 without anyone realizing it. 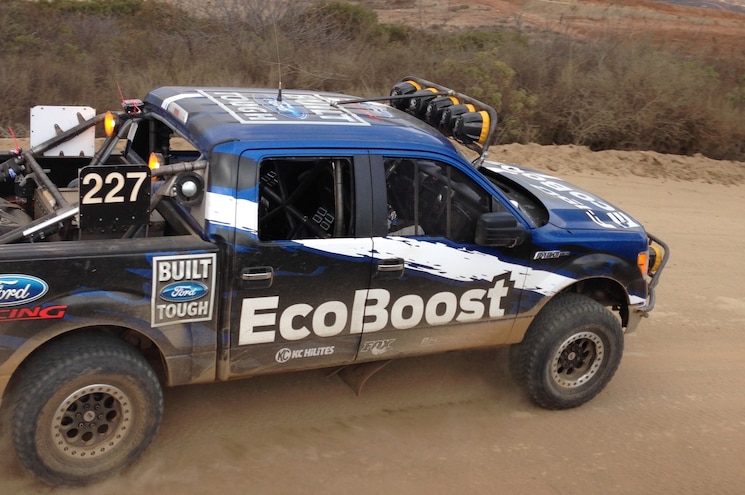 You've gotta hand it to Ford's team of engineers and its skunk works brain trust. They pulled off a daring feat, testing the new aluminum F-150 at the Baja 1000 without anyone realizing it.
Spectators might have thought the F-150 was a cool-looking race truck based on a current-gen Ford. Not that unusual, right? Except that everything underneath the skin -- frame, body, engine, transmission, and rearend -- was a 2015 F-150, complete with additional high-strength steel in the frame. The race truck was powered by Ford's new 2.7-liter EcoBoost V-6. The Baja 1000 was to serve as a hard-core proving ground for the new engine.
It was also intended to be a severe test for the truck's military-grade aluminum body. Ford took the new body materials and stamped them into the old body molds, and put the current generation's grille, headlights, and taillights in place. The result is an aluminum-bodied 2015 F-150, cleverly disguised as a 2013. 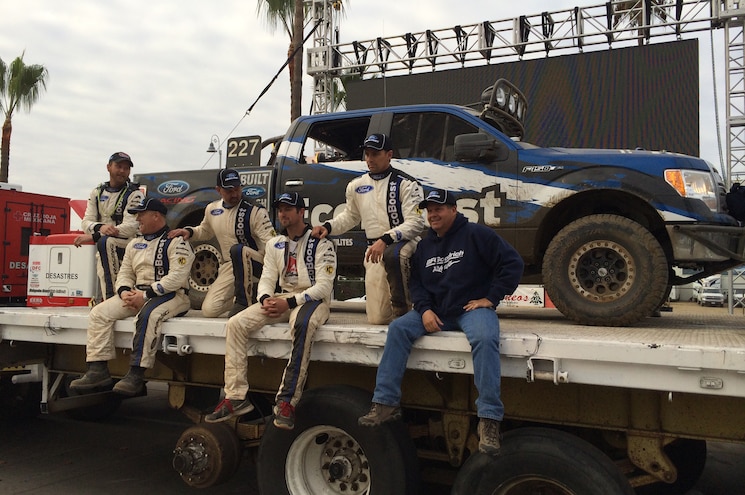 View Photo Gallery | 40 Photos
Photo 2/40   |   2015 Ford F 150 Race Crew
The truck started out as an early prototype of the 2015 truck, which had already gone through engineering validation. After the F-150 got its new (old) body, Greg Foutz and the staff at Foutz Motorsports -- which had previously worked on the Ford Raptor R that raced in Baja in 2010 -- got down to business on the new race truck. The F-150 was essentially under lockdown while at the shop, and anyone who so much as saw it had to sign a nondisclosure agreement.
When the truck was done, the team made a practice run at the Best in the Desert race at BlueWater. Then, they trailered it to Ensenada, Mexico, setting up camp outside of town away from prying eyes. The SCORE tech inspector agreed to a private inspection of the truck. The F-150, number 227 for the engine's displacement, ran in Class 2, which allows for a turbocharged engine, 3.5 liters or smaller, and six cylinders. It's basically an unlimited class. Usually, a truck like this would race in Stock Full, but there must be 5000 units produced to qualify for that category.
As Foutz explained, the truck was great. They didn't have to replace a single part. Considering Ford wanted the team to test out the stock intake, muffler, battery, etc. to confirm the toughness of the truck, that's quite an achievement. While the truck finished, it didn't get to the end of the race in the allotted time, so it was DNFed.
Next was part two of the test. The truck had done so well at the 1000 that the idea came up to drive it back to Michigan. After it was trailered back to the shop in Arizona, Foutz and race driver Chris Parker got in, and they set out on a road trip.
They put a Plexiglas windshield on the race truck and drove five days to get to Dearborn. Not only were they driving a super-secret truck on American highways in broad daylight, they went a step further, taking the truck to several tourist attractions, including the Grand Canyon, Roswell, the St. Louis Arch, and the Indianapolis Motor Speedway. When they arrived at Ford's world headquarters, they had completed extensive testing of the new truck and engine -- and no one had even noticed. 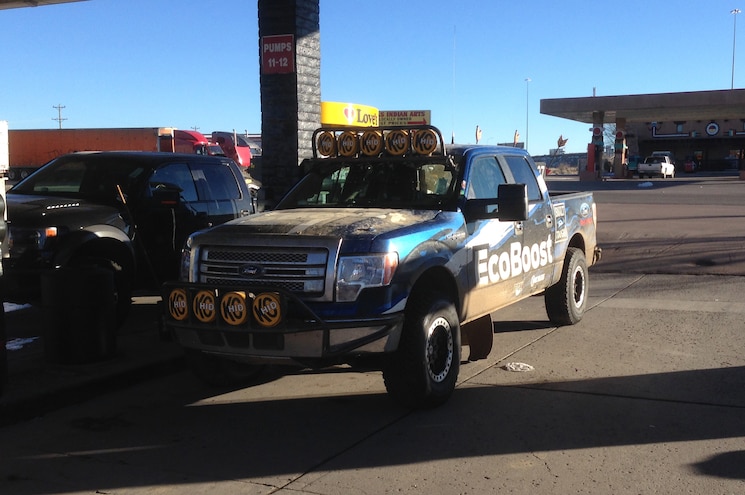