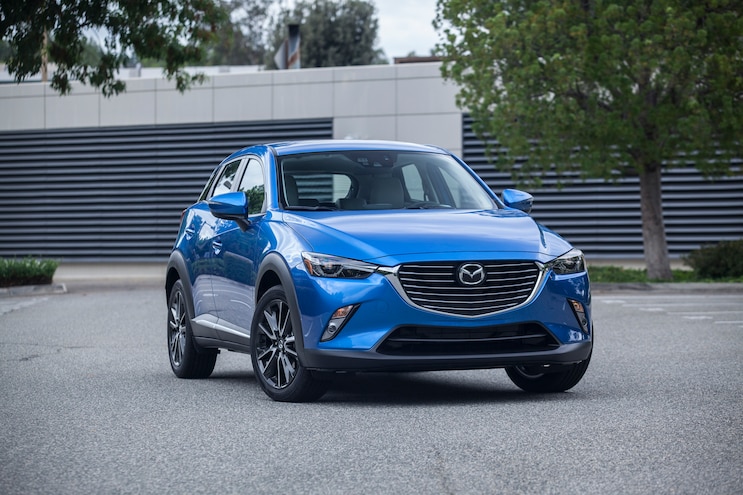 With a quick Skyactiv direct-injected engine, good handling, and a cabin filled with premium materials, the 2017 Mazda CX-3 Grand Touring model should be a strong competitor among compact SUVs. It bests them on price, offers 32 mpg on the highway, and has all the latest safety features, yet customers have to sacrifice one thing. What is that one thing? It is pretty important.

These days, the subcompact SUV segment is exploding with new options from nearly every competitor. In the past year or so, many competitors like Ford, Jeep, Honda, and Chevy have all come out with new or significantly upgraded vehicles. Fuel economy and safety remain two of the top buying reasons in the segment and most of these new vehicles feature turbocharged gasoline or hybrid engines. The 2017 Mazda CX-3 takes a slightly different approach with its naturally aspirated Skyactiv 2.0L engine, which is mated to a six-speed automatic transmission. This combination is not only quick off the line but returns good fuel economy with an EPA estimated 27/32/29 city/highway/combined. These numbers match those of the similarly sized Honda HR-V and beat out the Chevrolet Trax by a wide margin. 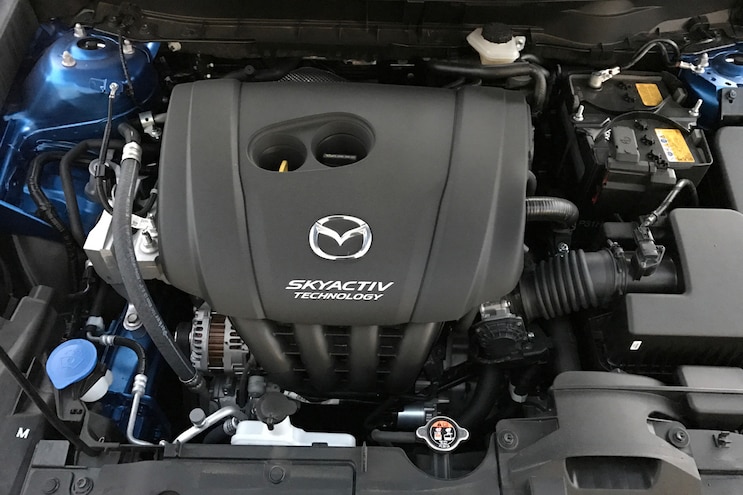 View Photo Gallery | 11 Photos
Photo 2/11   |   2017 Mazda Cx3 First Drive Engine
Safety is the other reason why people flock to small crossovers. In this area, the Mazda CX-3 Grand Touring meets or exceeds its competitors’ feature set, as it can be equipped with blind-spot monitoring, adaptive cruise control, forward collision mitigation, and an auto high-beam feature that’s found in most luxury products. Plus, it has a built in heads-up display, lane-departure warning, and adaptive front lighting system, which adjusts the headlights to light up the corners as you turn. Finally, it has a Smart City braking system, which operates from 2 to 18mph and actively detects objects, precharges the brakes, and will apply the brakes if the driver doesn’t respond.

Another big issue in the compact SUV segment is how wind tunnel testing has turned many vehicles’ designs into carbon copies of each other. This is due to automakers searching for every ounce of fuel economy improvement that they can find. Unfortunately, many vehicles now look generic and amorphous, save for the badge on the front. Not so with the Mazda CX-3. The design team has done a great job of making their SUV stand out with a slightly lower roofline, a sharp front fascia, and a flowing side body line. 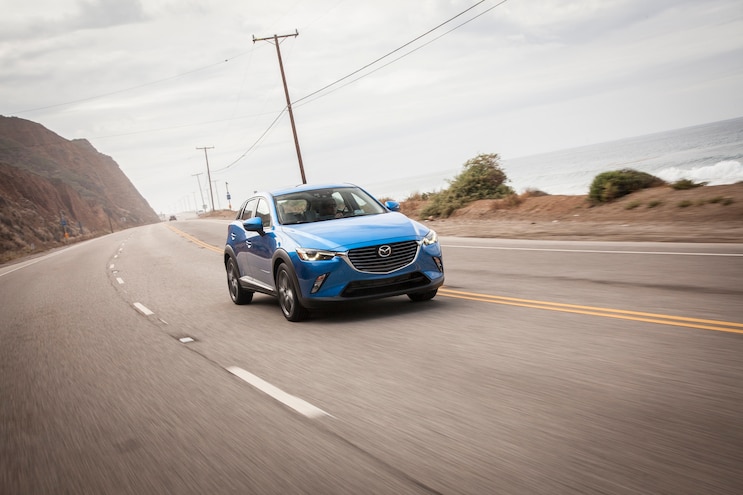 View Photo Gallery | 11 Photos
Photo 3/11   |   2017 Mazda Cx3 First Drive
This styling works for the front three-quarters of the vehicle while the rear seems a bit squished with designers opting for an additional window after the middle row. While the light is a benefit for rear passengers, it is an odd window and makes the rear hatch feel smaller than it really is. However, it isn’t that big of a deal and is definitely not a proverbial deal-breaker. 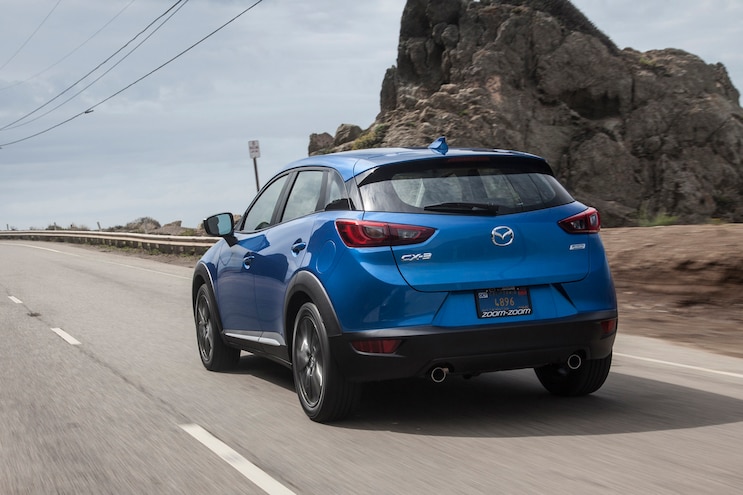 View Photo Gallery | 11 Photos
Photo 4/11   |   2017 Mazda Cx3 First Drive Rear
On the inside, the design team again did a great job of packing style into a small package. They used a smart mix of materials to accent interior trim pieces while still looking durable for long-term ownership. The center stack is well laid out, and the large heating and cooling buttons are easy to use. While the radio head unit could be louder, the only real issue inside is the tiny volume knob locating underneath an awkward armrest. This armrest is a good idea in theory, but it just gets in the way. The drink holder and the volume knob are located below it (note: the steering wheel has volume knobs that are much easier to use). This often creates the irritating repeating process of flipping up the armrest to get a drink, taking a sip, putting the drink back and then lowering armrest. It is just a nuisance really, yet not a deal breaker.

What is the one thing?

By now, you are probably wondering if the car looks good, has good fuel economy, a quick powertrain, and a slew of safety features, what possibly could be wrong with it? What is it that customers will have to sacrifice to get into Mazda’s aggressively priced CX-3 Grand Touring, which starts at just $24,990 with front-wheel drive or $26,240 with all four wheels driven?
Simply this: the 2017 Mazda CX-3 is loud. For example, as you rev up the engine, it drowns out the radio. Standing outside the SUV, I could literally hear the radio inside the cabin clear as day. Driving on dirt, around town, and at highway speeds it was truly remarkable how loud the road noise is. 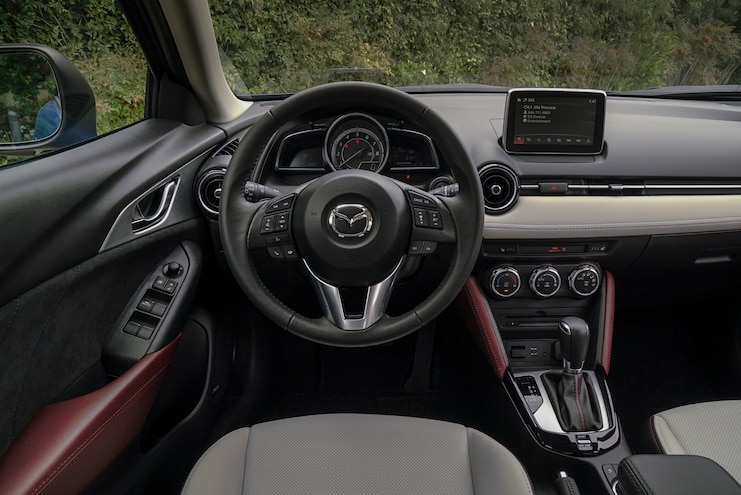 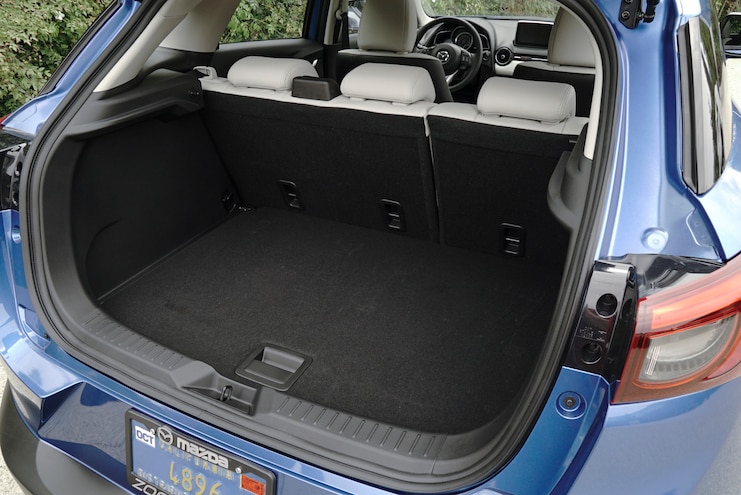 View Photo Gallery | 11 Photos
Photo 6/11   |   2017 Mazda Cx3 First Drive Trunk
All of the other competitors in the segment have done extensive work on sound deadening to create a luxury-like quiet cabin. But in the Mazda, it almost seems like there is no sound deadening in the cabin at all.
There’s the deal breaker for some and the sacrifice for others. Would you opt to pay a lot less for a vehicle if you had to sacrifice a quiet cabin? The answer to that question is the answer to whether or not the ’17 Mazda CX-3 is the right SUV for you. If you can live with a loud cabin, then you are in for a heck of a bargain and a fun driving experience. If not, keep looking—there are new options with quieter cabins.