Hunting With A 2017 Nissan Titan XD 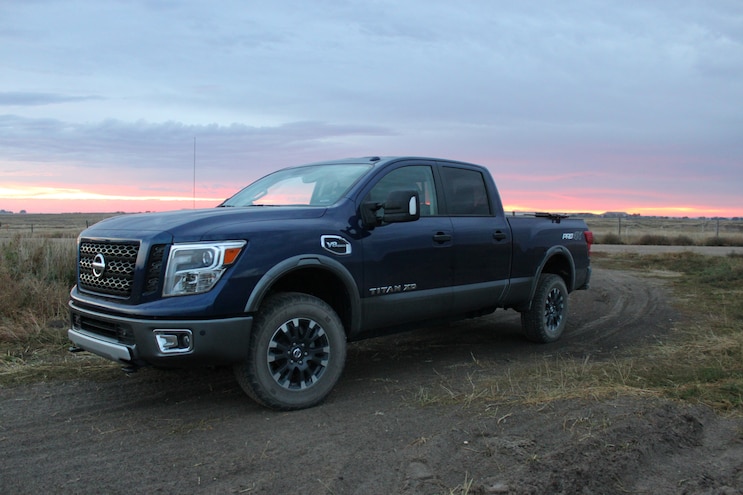 All automakers tout the hunting ability of their trucks with regards to storage, off-road capability, and unique features for true sportsmen. This sounds great on paper, but what happens when you put those features to the test? We did just that by taking the 2017 Nissan Titan XD, equipped with the 5.6L gasoline V-8, on a recent deer-hunting trip in eastern Wyoming. The results came out a bit mixed, just like our hunting trip. 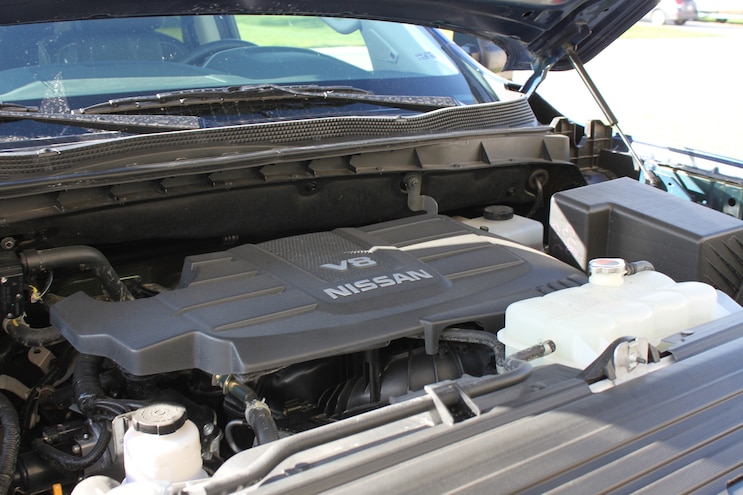 View Photo Gallery | 13 Photos
Photo 2/13   |   Hunting With 2016 Nissan Titan Xd Engine
From as far back as the invention of the Titan XD way back at the 2015 Detroit Auto Show, Nissan has been touting the hunting benefits of its truck. We took their word for it especially considering Rich Miller, Nissan’s Chief Product Planner for the Titan, is an avid bird hunter. While hunting deer is different than hunting birds, many of the same demands are placed on the truck. It has to have the clearance to get over any obstacles, cargo room for storing gear, and plenty of lighting for late night hunts. 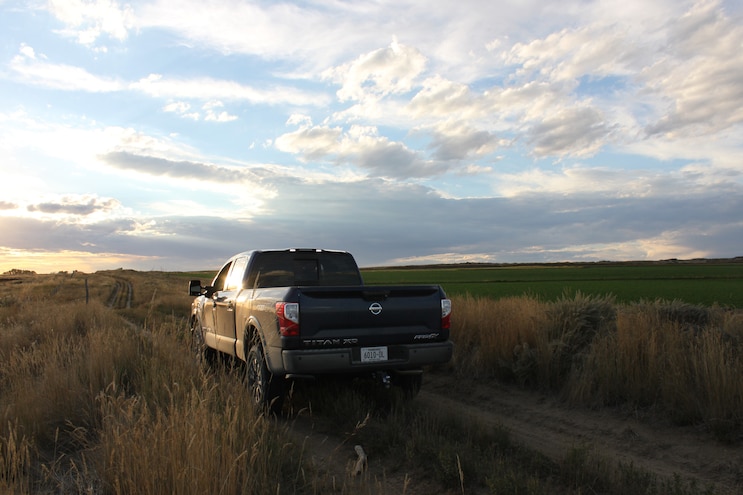 View Photo Gallery | 13 Photos
Photo 3/13   |   Hunting With 2016 Nissan Titan Xd Rear
For our hunting trip, we actually used the 2017 Nissan Titan XD gas three times -- two morning hunts and one evening hunt. This may sound strange to the average sportsman, but in Wyoming, deer hunting is different than other parts of the country. The deer rest in cornfields and tall weeds during the day and only move around dawn and dusk. As the weather cools and the corn gets harvested, the deer move more often, yet at the beginning of the season, October 1st, the deer don’t move much at all. In fact, the warm temperatures of 50-degree mornings and nights meant we only saw one white tail doe in the six hours of driving around to our different spots.
While driving, sitting, and scouting you tend to learn a lot of things about the vehicle you are in. For the Nissan Titan XD, this meant scrutinizing every detail. In many ways, there was a lot to like for hunting, like the high ground clearance, the comfortable seats, and the roomy cabin. With a fellow experienced hunter in the cabin, we never felt short on space. The roomy cabin allowed us both to store our gear and keep our binoculars spaced apart from each other for glassing the countryside. 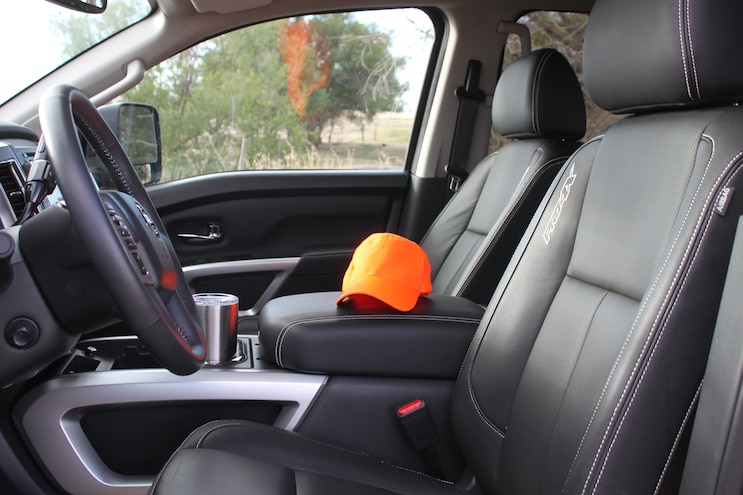 View Photo Gallery | 13 Photos
Photo 4/13   |   Hunting With 2016 Nissan Titan Xd Interior
One of the things we were most excited about trying out was the storage bin underneath the rear seats. We have heard Nissan talk extensively about how great the bin is, suggesting (but not expressly confirming) that it makes great locking storage for a rifle. Unfortunately, our .223 rifle didn’t fit. The bin is long enough for the rifle, but the retractable bipod arms we mounted on the barrel kept the rifle from fitting widthwise. Without those arms, the rifle would slide in nicely, although it should be noted only one rifle could fit in this bin.
While the bin was disappointing thanks to our retractable bipod arms, we wonder if there is a way to make the bin wider to accommodate different rifles. Not being able to store the rifle under the seat wasn’t a big deal since we were out in the country and didn’t need to worry so much about thieves. We just folded the seat up and laid the guns on the floor. 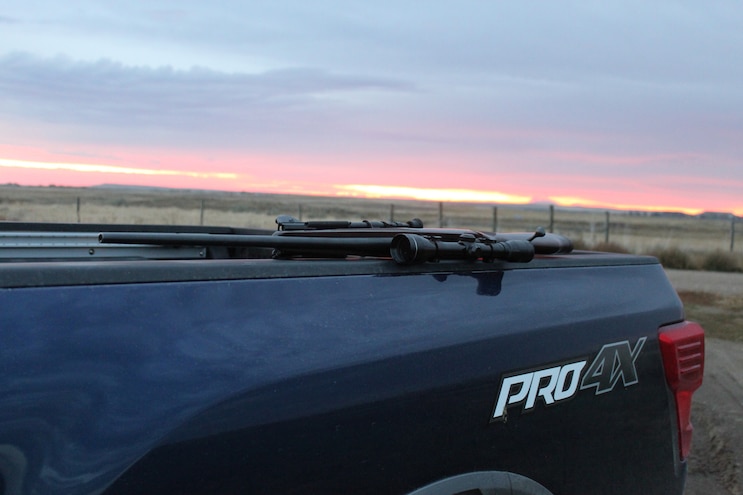 View Photo Gallery | 13 Photos
Photo 5/13   |   Hunting With 2016 Nissan Titan Xd Pro4x
Back in the driver seat, the large windshield made glassing the terrain really easy, and we had the full view of the countryside. We also had a great spot to store the binoculars in the cup holder bin after moving the cup holder tray to create a wide grab and go space.
Starting up and moving the truck from one hunting spot to another brought up a few different scenarios you don’t find in a normal test drive. For example, we drove across one field to another and didn’t always buckle the seat belt in case we needed to stop quickly, hop out, and take a shot. Fortunately, the truck didn’t chime relentlessly and allowed us to focus on watching for deer.
Also, the start-up noise of the engine was mild enough to not attract a bunch of attention. Quite often, we could see doves sitting outside the window and not flinching as we drove up (it was dove season as well).
While the noise was minimal and the viewing was great, the parking sensor was really annoying as it constantly went off backing up near tall weeds. It is a great feature for city driving, but blessedly, Nissan put a big button on the center stack to turn it off. 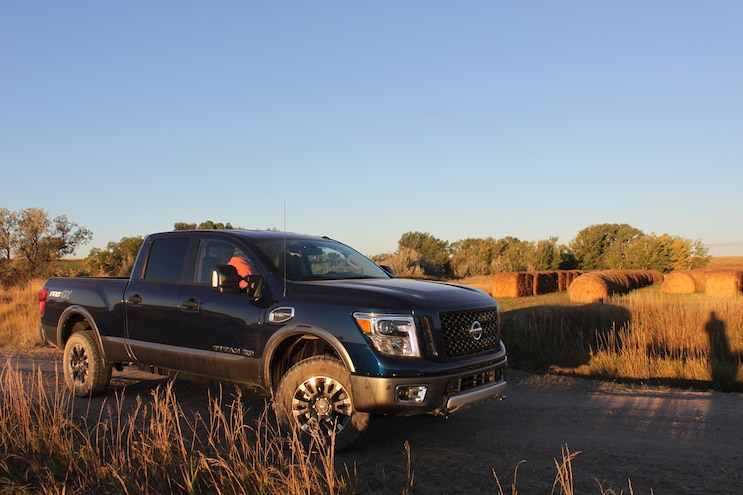 View Photo Gallery | 13 Photos
Photo 6/13   |   Hunting With 2016 Nissan Titan Xd
Besides the parking sensor, the lack of an easy-to-see compass and small outside temperature gauge are two areas that could see improvement. The compass is located in the center TFT screen between the speedometer and tachometer gauges. After flipping through the various menus, it is a big image with a clear direction indicator. It dwarfs the tiny temperature gauge, which, after searching for some time, is in line with the mileage counter. We would have liked to have had both as easy to reference on the rear-view mirror or on the radio screen.
All in the all, the 2017 Nissan Titan XD is a versatile truck with great off-road features (our test model was a PRO-4X as well) with just a few annoyances. With the in-bed Titan Boxes offering plenty of storage as well as the lockable gun storage (for most rifles) plus the powerful 5.6L V-8, it has a lot to like for the sportsman and tow vehicle owner.