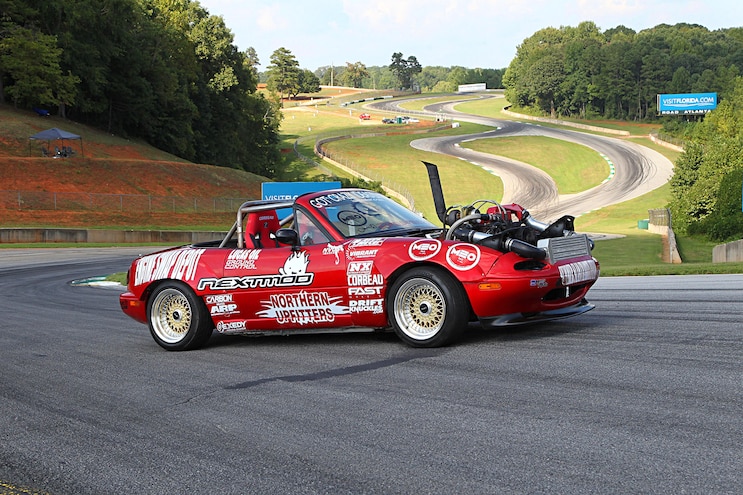 Drifting is one of the most unique motorsports on earth for a multitude of reasons, one of the biggest being that it is a judged sport. Although no one is running a stopwatch to see how fast a car is flying around the course, a panel of judges is studying every move a competitor makes during competition.
How much speed vehicles are carrying through the course, the angles drivers maintain while sliding, how aggressively they attack the course, and the level of precision they have controlling their car make up just a few of the aspects of drift judging. In a world where many motorsports are criticized for effectively eliminating showmanship from their competition, drifting actively encourages it. Because of this fact, the menagerie of vehicles you will see screaming, burning tires, and sliding around the typical drift course is amazingly diverse.
Of course, most of the vehicles that compete at any drifting event are small import cars that have wildly modified gas-burning V-8 engines installed. While those are fine for everyone else, the guys at Pistonhead Productions in Huntsville, Ontario, Canada, decided to build a 3.9L Cummins-powered Mazda MX-5 Miata for drifting fun and to raise money for a great cause. 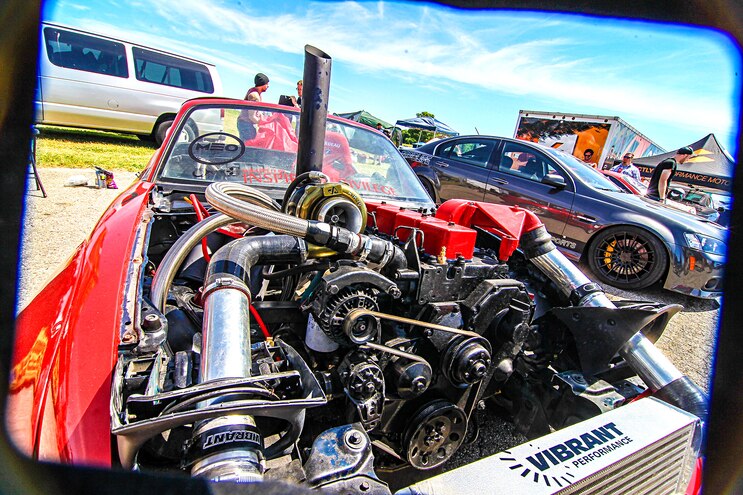 View Photo Gallery | 13 Photos
Photo 2/13   |   For sheer shock value, the 3.9L Cummins 4BT oil-burner growing out of the engine bay of this ’90 Mazda Miata can’t be beat. The best part is that it isn’t there just for ”oh, wow!” comments. The car was built to be a competitive drift machine.
“Hunstville High School is where I went to school,” Jacob of Pistonhead Productions says. “I took automotive classes at the school for four years and kept relationships with some of the teachers there. During a visit, I found out the school was being hit with some drastic budget cuts and their ability to earn revenue was being restricted. I thought we’d be able to help them raise some money using this project as a raffle.”
Now that you understand the motivation behind the build, let’s talk about the car itself. How did these guys choose a Miata? “We all love to do engine swaps and push the limits of our creativity,” Jacob says. “It seems like the creativity is leaving the world of engine swaps. Guys are buying nice kits to install engines, which is cool, but it is cooler when you put two things together that were never meant to be together.” 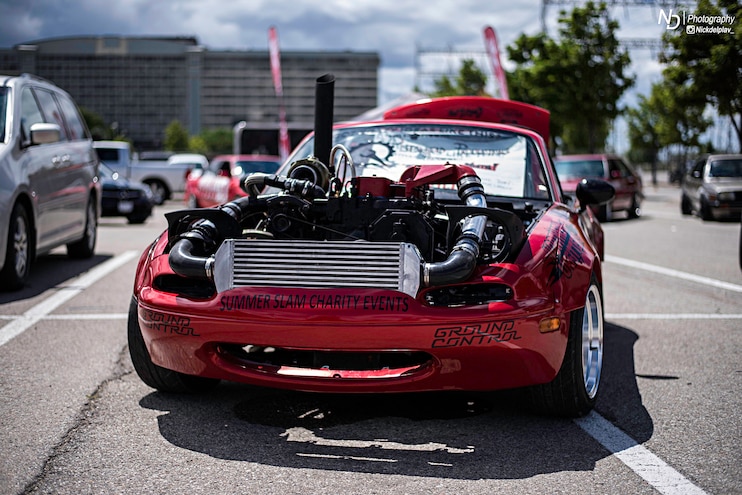 View Photo Gallery | 13 Photos
Photo 3/13   |   The carbon-fiber wide-body kit keeps 205/45R15 Hankook RS3 rubber under wraps at all times, even when the wheels are at full lock while drifting out of a corner. Note that the retractable headlight bezels are open and the intercooler plumbing passes through them!
The Mazda Miata was introduced in late 1989 as a 1990 model in the U.S. It was originally powered by a 1.6L gas engine that made 115 hp and a whopping 100 lb-ft of torque. Since the car only weighed about 2,000 pounds and was designed to be a pure, throwback sports car, the meager power got the job done. The most impressively small thing about the car is the wheelbase, which stands at only 89.2 inches. While what wheelbase makes for a snappy-handling little sports car, it turns this Miata into a challenging drifter. While the drift Miata’s size is interesting, the real story here is its powerplant and the associated drivetrain jammed into the car during a 48-hour thrash.
The stock 1.6L Mazda engine gave way to a 3.9L Cummins four-cylinder engine. This 780-pound lump of iron was mildly hot-rodded with the addition of ARP fasteners in such critical areas as the cylinder heads, connecting rods, and more. It was also upgraded with a 55mm Godspeed Turbo Innovations turbocharger, a BD Diesel Performance injection pump, BD’s governor spring kit, and a custom fuel pin made by Northern Upfitters, which also performed all the modification work. There’s also a Nitrous Express Diesel Stacker 2 nitrous-oxide system that adds 175 additional horsepower when the button is pushed. All this adds up some pretty stout power figures from an engine that’s only 234 ci. The little Cummins likely has about half the displacement of most of its competitors and, at 400 hp, its down in that department, too, but we cannot forget about the ace in the hole: torque. This little engine makes an estimated 800 lb-ft (approximately 700 percent more than the stock 1.6L gas engine did in 1990 when the car was new), and that’s where the real fun begins. 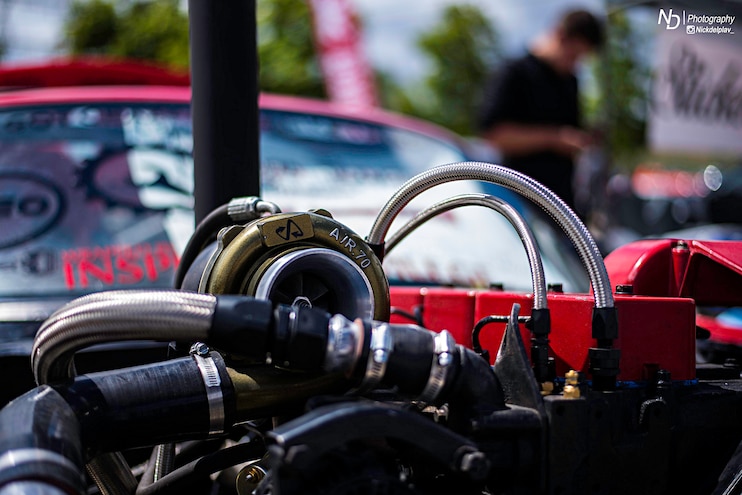 View Photo Gallery | 13 Photos
Photo 4/13   |   The Godspeed Turbo Innovations 55mm turbocharger is kind of like the gold star on top of a Christmas tree when it comes to the Cummins engine in this Miata. Pistonhead Productions estimates 400 hp and 800 lb-ft of tire-roasting torque are produced by the warmed-up engine.
In order to make smoke and slide a car sideways, having sufficient wheel speed is essential. And to make a diesel engine viable in drifting, a vehicle’s rearend and transmission gearing are absolutely vital. For this project, the crew chose a Ford ZF5 five-speed manual transmission to back the Cummins engine. This transmission has a 1:1 ratio in Fourth gear and a .76 overdrive gear. Couple that with the Ford 8.8 rear axle that has 2.73 gears in it, and you have the recipe for massive wheel speed. In fact, if the transmission is in Fifth gear and the engine is turning 3,873 rpm, the rear tires would be spinning at 150 mph! No, this car would not be a fantastic drag racer, but it is a tool built to complete a job: boiling the tires at speed while going sideways.
In order to get the driving dynamics of the car correct after adding an engine that’s nearly three times as heavy as a stocker, new parts were required. Starting with the springs, the crew opted for Eibach 1,200-pound units for the front and 800-pound springs in the rear. They also added Eibach sway bars front and rear along with R Theory Motorsports end links to keep the car stiff and flat. Ground Control coilover sleeves were used on the coilover shocks. 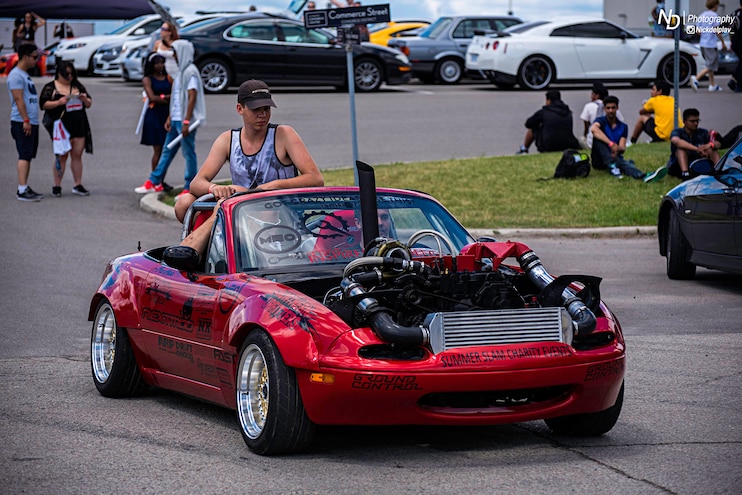 View Photo Gallery | 13 Photos
Photo 5/13   |   We like thinking the passenger is serving as a human periscope while the car cruises through the pits. The exhaust stack certainly gets people’s attention, but not so much as the noise emanating from it whenever this Miata’s diesel is running.
One of the things most people notice quickly while watching drifting is the extreme steering input these machines use in order to execute the wild slides drivers are looking for. The Miata uses a DriftKunckles.com angle kit to achieve the forklift-like steering angles drift cars need. The interesting engineering in these parts is that cars like Miatas suffer real big degradation of their handling characteristics when the steering angle increases. Stuff like bumpsteer can make the car virtually uncontrollable, but these special steering knuckles cure that problem and allow the wheels to do the wacky stuff they are doing in these photos.
The Miata’s brake system was also modified in an interesting manner. Because drivers use a handbrake during competition to help throw the car into slides and change directions, a custom handbrake and a dual-rear-caliper setup was designed and built by Chrome 2 Envy Customs. DBA brake rotors from Moss Miata take all the punishment EBC green brake pads can deliver during competition. 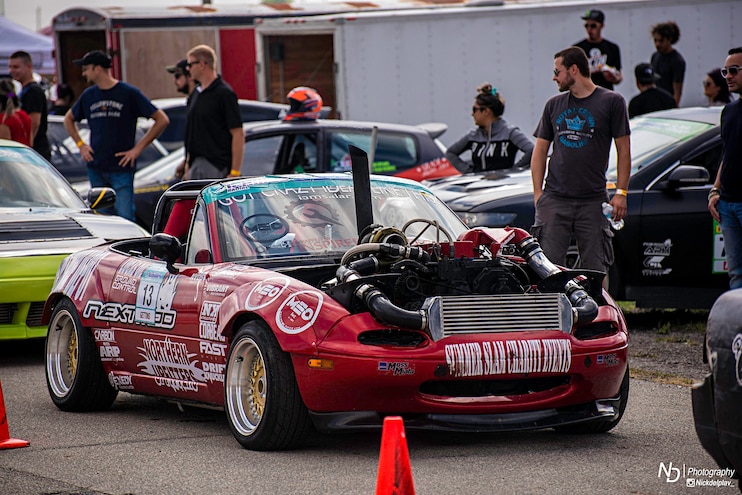 View Photo Gallery | 13 Photos
Photo 6/13   |   This build was not only about mashing the 3.9L diesel into the engine bay. Backing the engine is a Ford ZF5 five-speed manual transmission, and all the way out back is a 2.73-geared Ford 8.8 rearend.
As nontraditional diesel swaps go, it’s hard to beat the uniqueness of putting a Cummins in a Miata to go drifting. Recognizing that fact, this car was built for a great cause and it looks like a heck of a lot of fun on the track. Will this be the first of a huge trend of Cummins-powered Miatas? Probably not. But we’re betting the popularity of using diesel engines in drift cars is a trend that’s just in its beginning stages.
“My favorite things about this build are the memories we made,” Jacob says. “The car is cool, but the way it was built and the people we built it with are spectacular. Being able to help out my old school is a huge bonus as well.” 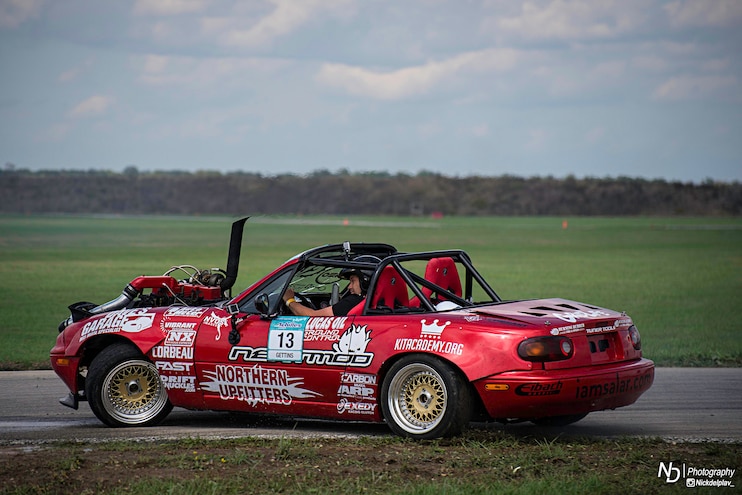 View Photo Gallery | 13 Photos
Photo 7/13   |   There’s a couple of things to make note of in this photo. First is the cool set of Royale wheels by the Fast Wheels Company, and the other is the crazy steering angle achieved by using a DriftKnuckles.com steering-angle kit. Think he saved it? 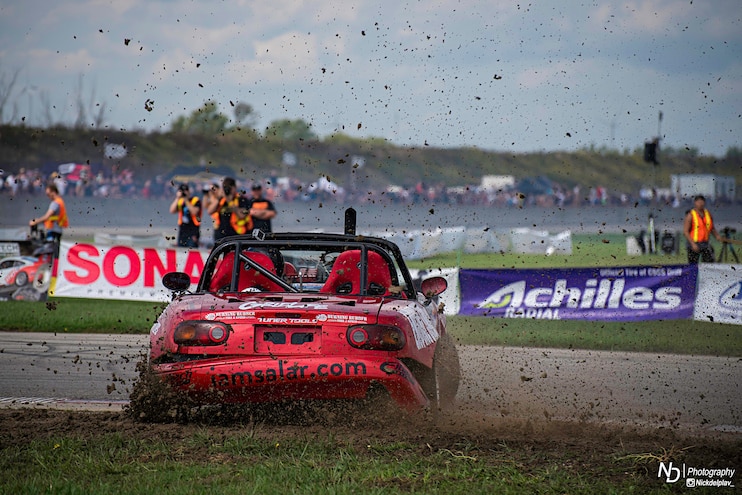 View Photo Gallery | 13 Photos
Photo 8/13   |   Not quite, and the rear bumper cover is taking a beating! Judging by all the flying dirt, the driver was in the gas trying to power out when the little Miata swapped ends on him. With a little more than 89 inches of wheelbase to work with, this is a snappy little drifter. 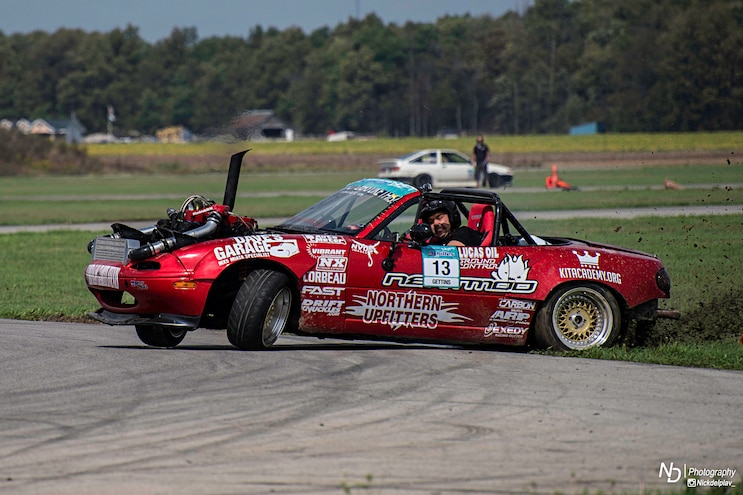 View Photo Gallery | 13 Photos
Photo 9/13   |   You can see the heat rising from the exhaust stack and the driver’s clenched teeth in this photo. The rear bumper cover has already parted company with the car, so this was on a run after the first trip off course. Hey, this is how you learn—and boy does the practice look fun! 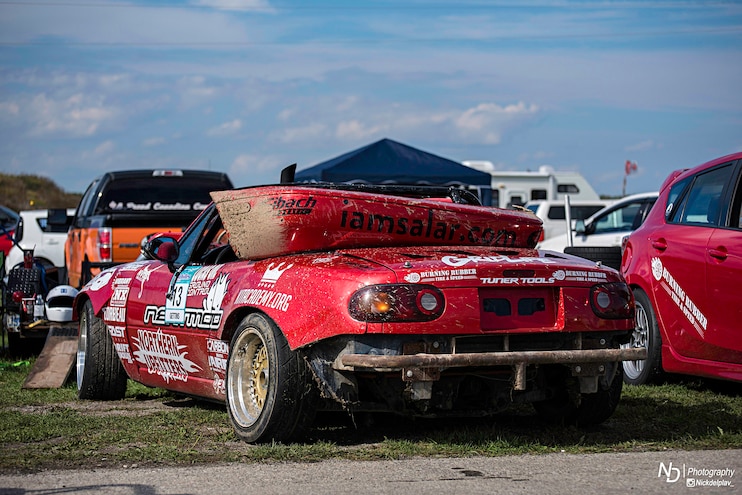 View Photo Gallery | 13 Photos
Photo 10/13   |   This car was not just built for the Pistonhead crew to play with; it was constructed as a means to raise money for the local vocational school in Huntsville, Ontario, Canada. Vocational schools are an integral part of the educational system in Canada and the U.S. They are also being undervalued. 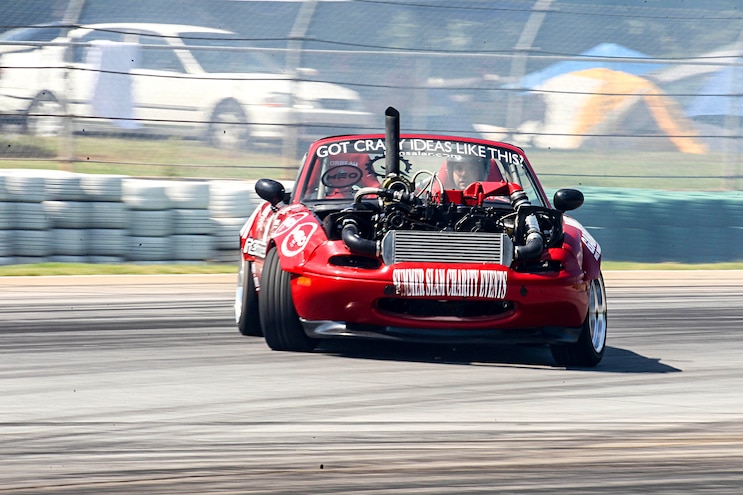 View Photo Gallery | 13 Photos
Photo 11/13   |   One of the things drifting judges look at during an event is the amount of speed a competitor can carry around the course and how aggressive a driver gets while entering turns.

View Photo Gallery | 13 Photos
Photo 12/13   |   In stock trim, a ’90 Miata weighs 2,070 pounds. The Cummins engine by itself weighs about 780 pounds with fluids in it. The crew had some real work to do on the suspension to keep this car from sagging badly in the nose. Robust 1,200-pound springs in the front and 800-pound springs in the back handle the load. 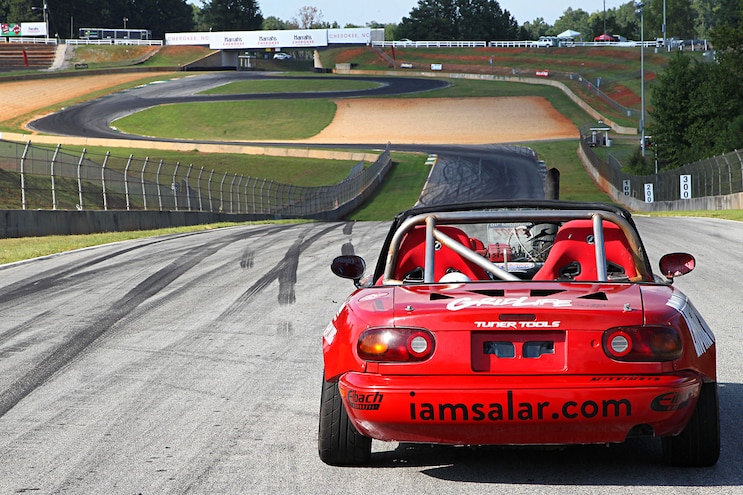 View Photo Gallery | 13 Photos
Photo 13/13   |   Under normal circumstances, the road-racing Miata enthusiast looks at those curves and plans how to clip the apexes and be smooth around the course. The Miata drift driver wonders how sideways he can get it and how much smoke he can make in the process. All that Cummins torque makes it happen!