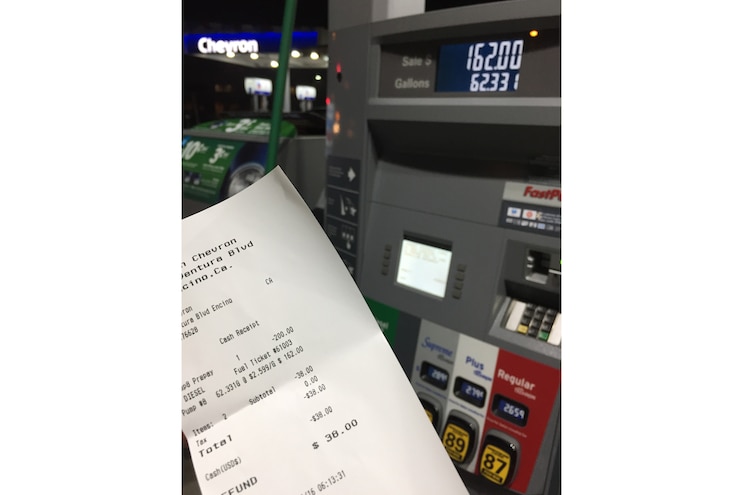 My comments this month are accompanied by a photo I shot at the fuel pump, immediately after paying nearly $165 for 62 gallons of #2 diesel. No, I’m not angry about the total amount I had to fork over, which, at $2.59 per gallon, is actually pretty good for Southern California. It’s just that the whole sequence of events—from prepaying to pumping and then getting my change—made me think about the monetary and non-monetary, positive and/or negative “prices we pay” for the things we want, do, say, or experience in our normal, everyday lives.
Typically, hard work is the price…or investment…that’s expected for a person to achieve success. “Put in the work and reap the benefit.” This is true, but I like to throw an “eventually” in that statement, because immediate gratification or reward doesn’t always happen.
However, with that being said, in 2016 we got to see how grinding (paying the price of working hard) and staying focused earned Charlie Keeter a Diesel Power Challenge victory. We also watched Lavon Miller win the big check at the inaugural Ultimate Callout Challenge, as well as a championship in the Outlaw Diesel Super Series’ XDP Pro Street Class. And, on a completely different plane, die-hard Chicago Cubs fans were finally able to rejoice about their team’s 108-year Major League Baseball World Series drought coming to an end on November 4. Paying the price is twofold here. There’s the suffering brought on by years of Cubs teams that were simply terrible, and there is elation over the 2016 team’s collective hard work and a never-say-die effort in Game 7 that resulted in a title.
Something I need to impress upon you is that the proverbial “price you pay” doesn’t always result in good feelings. In my opinion, leading the list of examples are: being arrested, convicted, and sent to jail or prison—the expected price one pays for breaking the law—or fired from a job for insubordination of whatever sort. Toning the idea down a bit, and somewhat humorously, I remember a painful price (for ignoring my advice to not swing around and around on the post that supports the cover on our porch) my nephew paid when he was a youngster, maybe three years old. He just kept on swinging, until his hand slipped from the pole and he went crashing onto the driveway. He wasn’t hurt, but he damn sure paid a price for his bad judgment. He’s 16 now, and we still chuckle about that.

View Photo Gallery | 2 Photos
Photo 2/2   |   Particulate Matters Fuel Receipt
While I didn’t sweat the total for Big White’s fill-up, some prices that are the direct result of a particular action really can be flat-out expensive. One of the more prolific moral and monetary expenditures in the diesel scene is the Volkswagen emissions debacle, which erupted in September 2015 after VW engineers intentionally programmed TDI diesel engines to activate certain emissions controls only during laboratory emissions testing. The ECM calibration allowed the vehicles’ NOx output to meet U.S. EPA standards during regulatory testing, but the vehicles then emitted as much as 40 times more NOx in real-world driving.
For choosing to buck the system and sell TDI vehicles in the U.S. that did not comply with the EPA’s pollution standards from 2009 to 2015, the German automaker is paying the heavy prices of losing U.S. consumers’ trust and confidence in its product, as well as billions and billions of dollars in lost sales, costs for correcting the problem in the oil-burners that are still in service, restitution to owners who elect to sell their cars back to VW, and the huge amount in fines levied by the government.
Thinking about Volkswagen’s problems also makes me wonder what the price some of us will be forced to pay, in currency and in shame, if a similar EPA crackdown on tampering with trucks’ emissions equipment hits our sector in full force and diesel owners (and businesses) start getting busted for lack of compliance. I know I should rid my brain of such evil thoughts, but the realist in me makes it difficult. That dark, ominous cloud just refuses to go away. I know this is starting to seem like we pay prices, which is actually another way of saying we suffer consequences, only for bad things. Well, yes, that’s correct for many instances. But, it’s not 100 percent true.
For several years, I and a couple of my close friends have made it a point to give some of our time and support to residents at a local home for the elderly. The helping out ranges from reading to serving meals, playing checkers, and just having general conversation with the seniors. I have learned a lot about the history of Los Angeles and our world just by speaking with these wonderful people. However, there are occasions when spending time with those folks conflicts with other events—usually social—on my calendar. I’m glad that I can say I never have (and probably never will) let those happenings get in the way of being with special people whom I consider my “senior family.” If missing something (trivial, in the big picture) is the price I have to pay for seeing a smile or hearing a laugh—or just knowing I’m possibly brightening a pioneer’s day—I’ll pay that price. As a matter of fact, I’ll pay double, anytime!