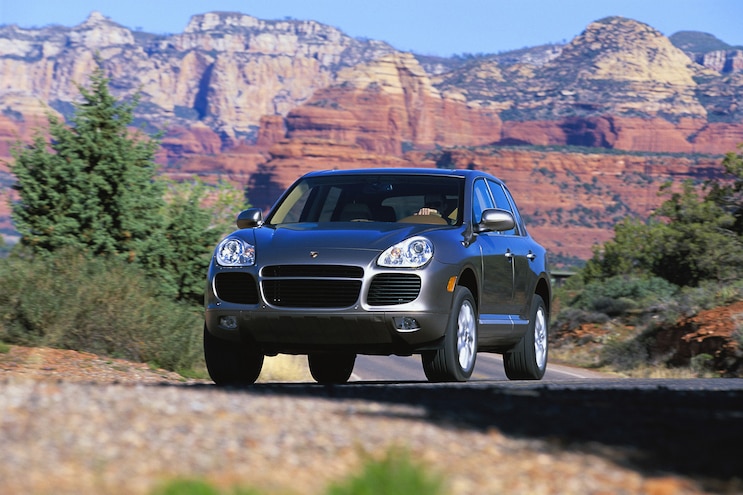 Here’s a way for truck lovers to get into Porsche performance and for Porsche lovers to enjoy the advantages of a sport utility vehicle. When the Cayenne first came out, the automotive world found it hard to come to terms with a heavy all-wheel-drive SUV taking corners like a sports car, or at least a sport sedan. It seemed no one except for Porsche knew the laws of physics could stretch that far.
This is a machine with a maximum cargo capacity of 62.51 cubic feet, a luxurious interior and a tow rating of 7,716 pounds, yet it’s also capable of sprinting from standstill to 60 mph in just 5.6 seconds (’03 Turbo). The permanent all-wheel drive system was developed from the hardware in the 911 Carrera 4 of the time. It has a 38/62 torque split front to rear, but with the ability to send more juice to the front axle whenever it’s required. It also has a locking rear differential, plus automatically disconnecting anti-roll bars at both ends, maximum ground clearance of 10.75 inches (Turbo), plus protective plates for the radiator and underbody. 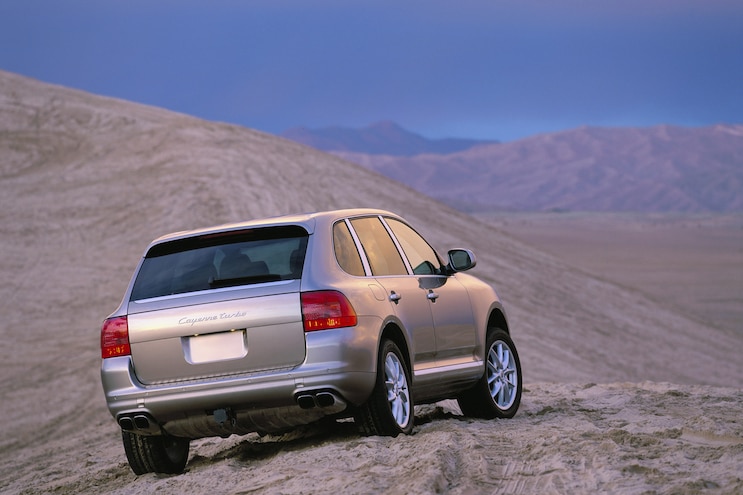 View Photo Gallery | 4 Photos
Photo 2/4   |   2005 Porsche Cayenne R3q
So it’s an SUV that can go off-road, yet still deliver a thrilling performance on the tarmac. The BMW X5 also has a great suspension, but drive these two rivals back to back and chances are the Cayenne will get the nod, especially when the going gets rough.
The range launched in ’03 with the S and Turbo models, both with a 4.5L V-8 engine, but the latter has forced induction for a muscular 450 hp and 460 lb-ft of torque, as opposed to 340 hp and 310 lb-ft in the S.
A V-6 version arrived in ’04 (just called the Cayenne), with 247 hp and 228 lb-ft. It’s essentially the 3.2L V-6 from Volkswagen (this vehicle and the Touareg are derived from the same platform). A manual transmission was offered for the V-6 from ’05. 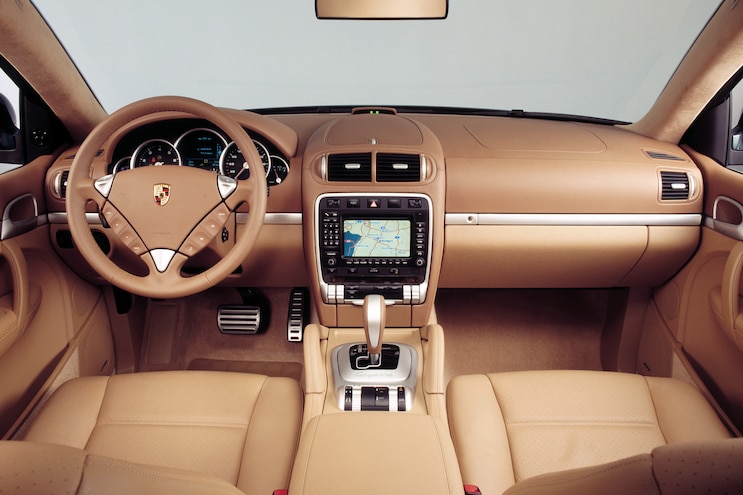 View Photo Gallery | 4 Photos
Photo 3/4   |   2005 Porsche Cayenne Interior
The Cayenne skipped the ’07 model year.
A major revamp came in ’08, with refreshed (and arguably more pleasing) exterior styling. The V-6 was now a 3.6L unit producing 290 hp and 273 lb-ft of torque. Displacement in the V-8 engines increased to 4.8 liters, resulting in 385 hp and 369 lb-ft for the S and 500 hp and 516 lb-ft in the Turbo. A powered tailgate also became standard.
Two new variants launched in ’09: the GTS and the Turbo S. The GTS shares the naturally aspirated V-8 of the S, but has its horsepower boosted to 405; it also has a 6-speed manual transmission and a lowered ride height. The Turbo S generates 550 and 553 lb-ft from its twin-turbo V-8. Top speed is 174 mph and this model can hit 60 mph from standstill in 4.8 seconds, which is just a tenth of second away from the manual-transmission ’09 911 Carrera. Bluetooth joined the list of standard equipment.
About 88,000 first-generation Cayennes were sold in the United States. 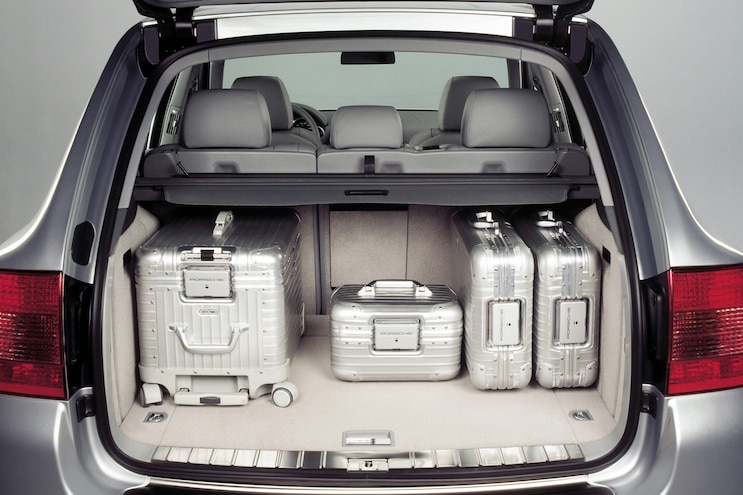 View Photo Gallery | 4 Photos
Photo 4/4   |   2005 Porsche Cayenne Cargo
The 3.2L V-6 is on the underpowered side, but if you’re looking at something up to and including ’06, it’s either this engine or the Turbo, because the early S models had problems. They used Lokasil cylinder liners (the Cayenne’s V-8 engines have aluminum blocks and heads, and therefore need something more durable in the cylinders), which usually disintegrate around 70,000 miles with catastrophic failure being the frequent result. From ’08-onward, the S had the virtually trouble-free Nikasil liners, which were in the turbocharged versions all along.
An ’08 Cayenne S in good condition, with 109,000 miles on the odometer and bought from a private seller is valued at $11,346. A comparable BMW X5 4.8i goes for $10,203, or expect $11,245 for a Land Rover Range Rover Sport HSE.