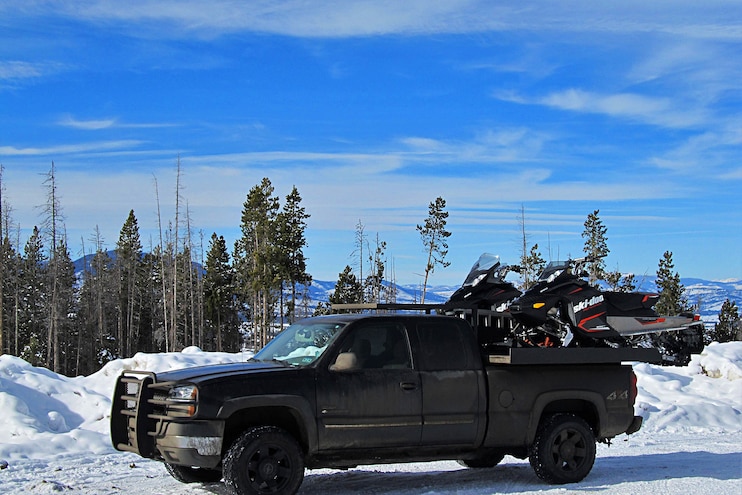 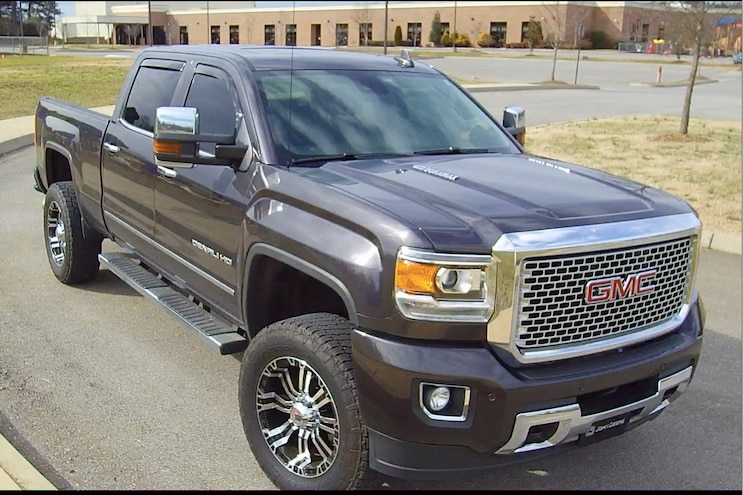 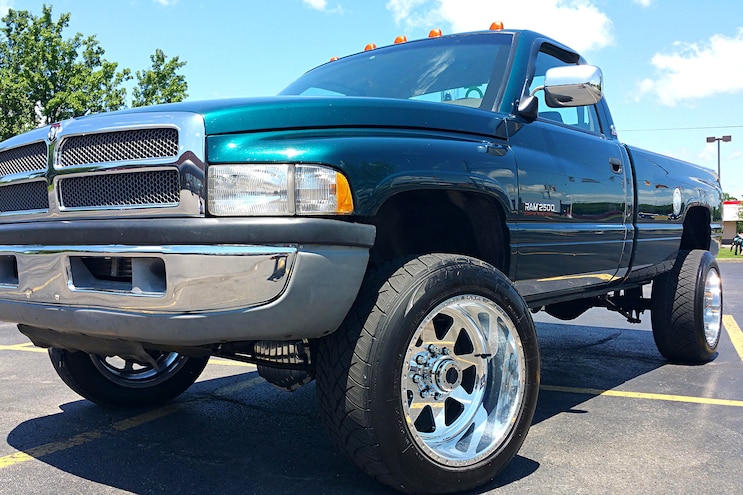 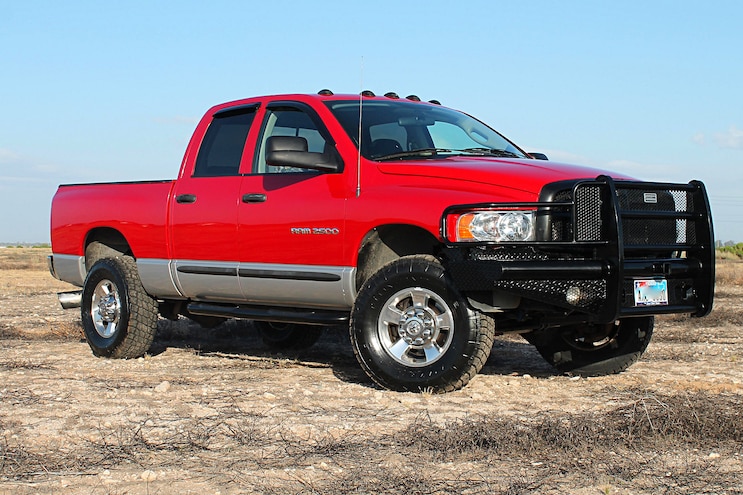 Year/Make/Model: ’05 Dodge Ram 2500
Owner: Weston Killian
Hometown: Abilene, Texas
Engine: 5.9L Cummins I-6
Transmission: G56 six-speed manual
Odometer: 160,000 miles
Fuel Economy: 16 city/19 highway
Modifications: South Bend Clutch clutch kit, MADS Electronics Smarty Jr programmer, Edge Products CTS programmer, K&N Engineering cold-air intake system, custom 4-inch turbocharger-back exhaust, Ranch Hand bumpers, Custom Diesel Inc. steering stabilizer, Rancho Performance shocks, and 305/70R 17 Nitto Terra Grappler G2 tires on stock rims
Owner says: “I am an F-16 instructor pilot in the United States Air Force and have been driving diesel trucks for 10 years. I will never go back to a gasser. My wife bought this truck for me when I was deployed to Iraq, because I sold my Power Stroke-powered Ford before I left. She picked me up in the Ram when I came home. It was the best welcome-home present I could ever ask for. I pull our 26-foot travel trailer for family camping trips with ease.” 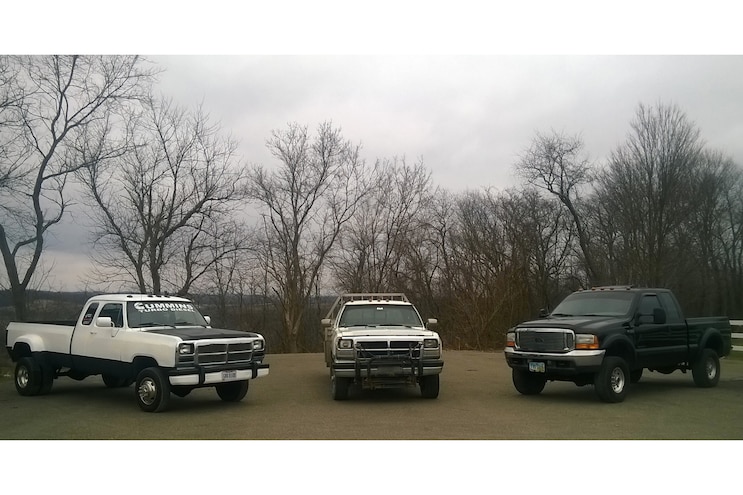 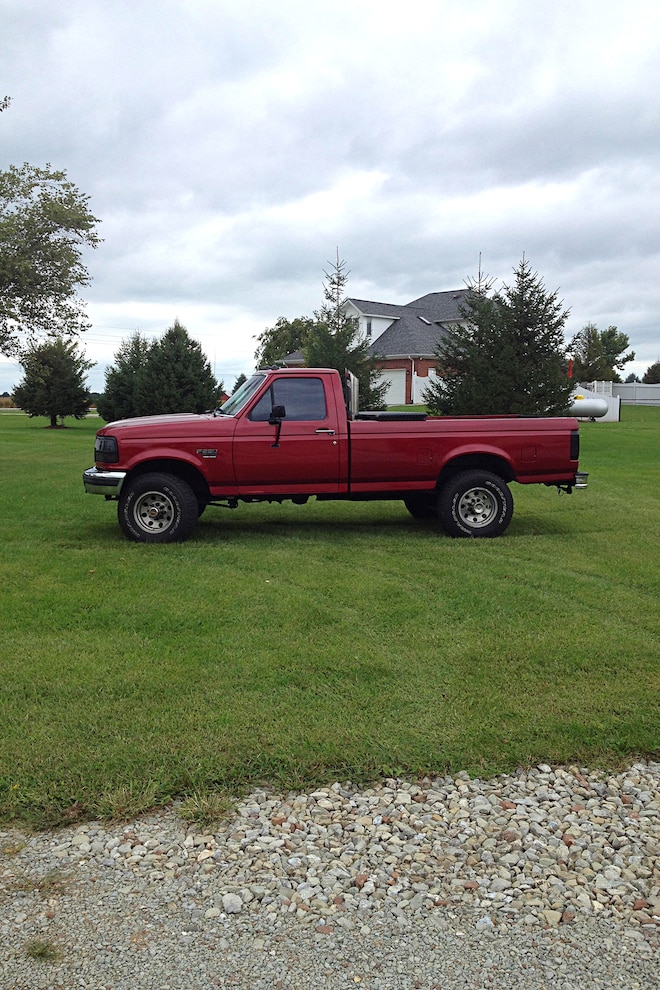 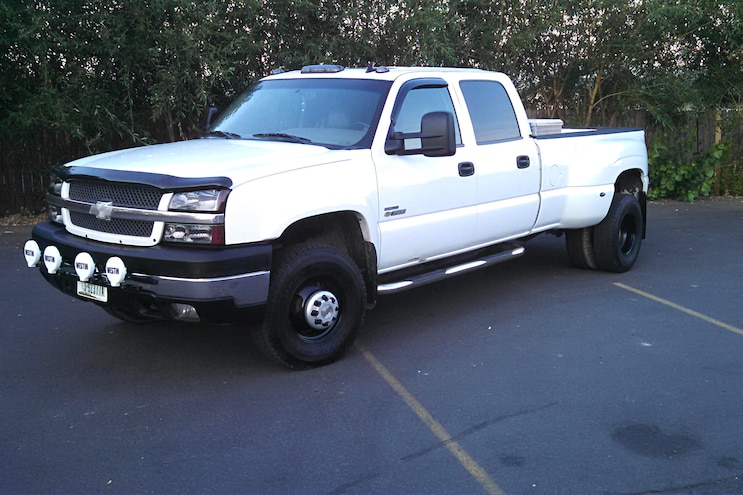 Year/Make/Model: ’06 Chevrolet Silverado 3500
Owner: Alex Cummings
Hometown: Billings, Montana
Engine: 6.6L Duramax LBZ V-8
Transmission: Allison six-speed automatic
Odometer: 160,000 miles
Fuel Economy: 15 to 17 mpg
Modifications: Hypertech tuner, 4-inch downpipe-back exhaust, lightbar, LED clearance lights, smoked headlights and turn signals, and TransGo SK Allison Jr. shift kit
Owner says: “The truck played ‘sports car’ in the 2014 Dustball Rally 2000 from Austin, Texas, to Chicago, Illinois. It ran a hard 4,500 miles round trip from Montana and back with zero issues and received some well-deserved praise for running with Porsches and a Ferrari F430 in the group and holding its own. Rumor has it that the truck may have hit 130 mph on the trip. It was a blast of a trip. Additional upgrades for the engine include injectors and a lift pump.” 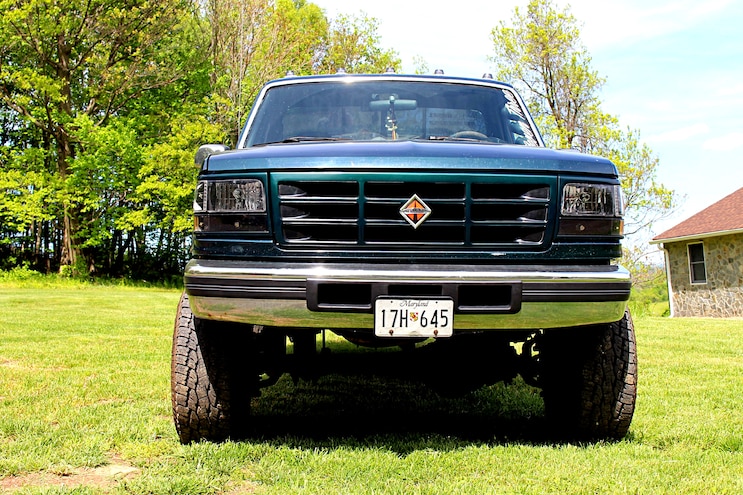 Year/Make/Model: ’95 Ford F-350
Owner: Geoffrey Roelkey
Hometown: Knoxville, Maryland
Engine: 7.3L Power Stroke V-8
Transmission: ZF5 five-speed manual
Odometer: 130,000 miles
Fuel Economy: 15 mpg
Modifications: Rosewood Diesel Shop 160cc injectors, Marty’s Diesel Performance electronic fuel system, STR Diesel traction bars, LED lights all around, 285/70R 17 Toyo Open Country AT2 tires, 17x10 Fuel Maverick wheels, 5-inch exhaust into 8-inch single stack, AFE Power Big Boost air filter, and color-matched grille and bezels with Riffraff Diesel Performance International emblem
Owner says: “This truck has been in my family since 1998. My dad used it to haul hay and cattle. He passed it down to me, and since then it has been my pride and joy. I wouldn’t trade anything for the hours spent in the garage wrenching on this thing with my dad. We even pulled the factory E4OD automatic transmission out and swapped it with a ZF5 five-speed manual. Dad says it has more power than it ever has, and sometimes I feel he regrets giving it up.”

Year/Make/Model: ’04 Chevrolet Silverado 2500HD
Owner: Mitch Andrews
Hometown: Willoughby Hills, Ohio
Engine: 6.6L Duramax LB7 V-8
Transmission: ZF6 six-speed manual
Odometer: 227,000 miles
Fuel Economy: 22 mpg (15 mpg with sled deck)
Modifications: AFE Power cold-air intake system, 4-inch turbocharger-back exhaust, EFILive DSP5 programmer with tuning by Duramaxtuner.com (tweaked by Mitch), Valair Performance Diesel Clutches dual-disc clutch, and custom sled deck
Owner says: “My dad and I found this rare gem listed online from a dealer in Texas and had it back to Ohio in less than a week. The ZF6 behind a Duramax isn’t something you find very often, but I wouldn’t have it any other way! My smaller, faster toy is a fifth-generation Chevrolet Camaro SS, which shares a matching license plate with the Silverado: “6SPD LB7” and “6SPD LS3.” The sled deck was custom designed and fabricated by yours truly and makes 4,000-mile road trips to Colorado and Utah much simpler without the hassle of a trailer. They are rather common out west, but there are a lot of turned heads and fingers pointed back in Ohio. I am saving money for a full-forged bottom end and a couple of big turbochargers for the engine!”