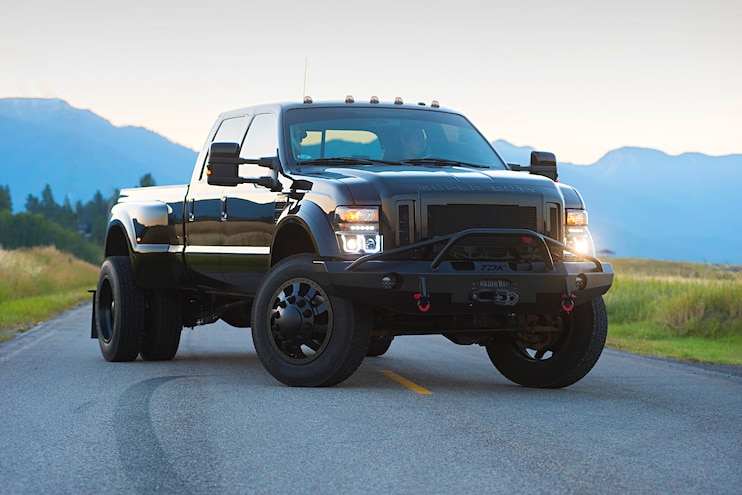 Truck builds are often the direct reflection of an owner’s personal taste in performance and appearance modifications. A rig’s look, fit and finish, styling, and power all derive from the preferences of the guy or girl who owns it. In the case of Jocko McCants and his ’10 Ford F-450, this means it’s a truck that is built right and delivers on the commitments he makes with the shops that work on it. Jocko is also a shop owner, operating a garage in Issaquah, Washington, that specializes in the repair of German cars.
Because he is in the business and knows the standards he maintains at his own workplace, Jocko expects top quality from the people he works with on vehicle upgrades. “I have been working on cars since I was 14 years old,” Jocko tells us. “I got a ’79 Ford Pinto that needed an engine. I mowed lawns and did whatever I needed to do in order to get the engine, and when I got it, I installed it.” Working with a wooden A-frame and a come-along, he got the job done before he was legally able to drive the car, which, as you can imagine, did not stop him from getting behind the wheel. 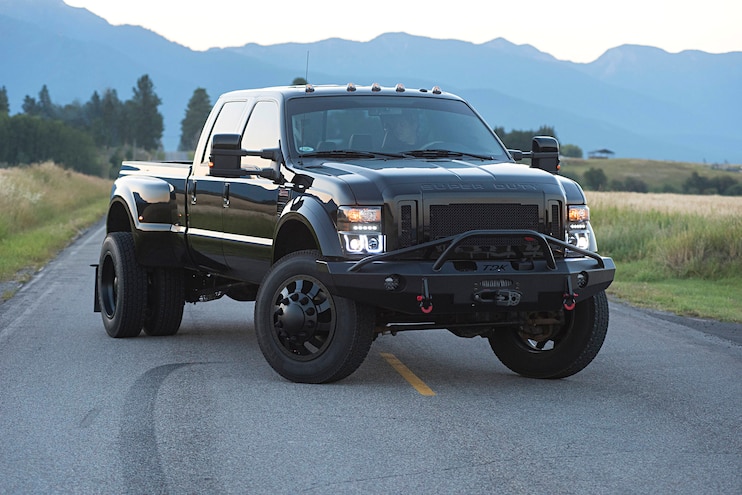 View Photo Gallery | 83 Photos
Photo 2/83   |   Jocko McCants’ ’10 Ford F-450 could never be considered stealth per se, but it sure looks mean dressed all in black. The red Cummins logo and accents on the tow hooks are the only subtle hints of what lies under the hood.
The story of how Jocko came to own this particular truck and how it was transformed into the beastly, black-tux-wearing dualie you see before you is pretty interesting. “I have no problem driving or flying anywhere to get work done or to buy something,” Jocko explains. “I actually found this truck in New York on a Craigslist search, and it caught my eye. I was concerned initially because of rust. We sometimes have customer cars come into the shop from that area, and they are horrible to work on. As it turns out, this F-450 was purchased in Florida and driven back to New York where it never saw snow or salt.” There was no deliberation by Jocko about what was going to happen next. He flew to New York and, over the course of two days, drove his new truck to Diesel Conversion Specialists in Montana, where significant drivetrain modifications would be made. “When I got to the DCS shop, they were a little freaked out that I was dropping off a perfect truck with about 7,000 miles on it and absolutely not one problem in the world,” Jocko laughs. “I have owned all the different brands of rigs, and I like different things about all of them. I really like the Allison transmission in the GM trucks, I love the design of the Ford’s cab, and my favorite part of the Ram trucks is the Cummins engine. I wanted the best of all three combined into one rig.” 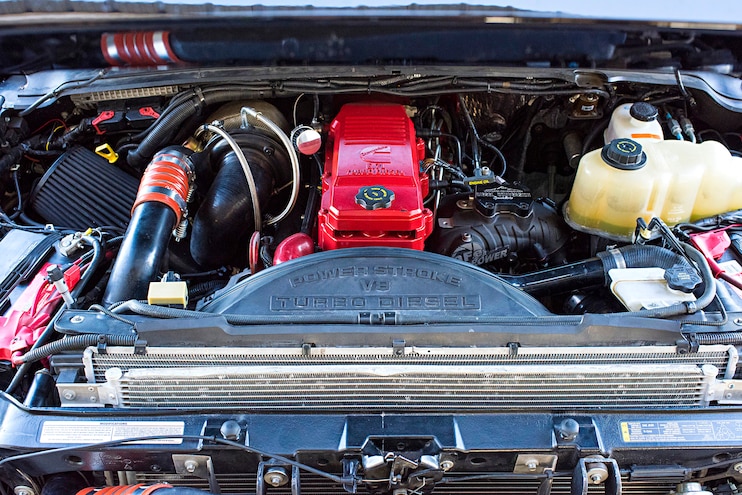 View Photo Gallery | 83 Photos
Photo 3/83   |   While the die-hard Ford fans may not appreciate this view as much as we do, the compound-turbocharged 6.7L Cummins engine looks very much at home in the engine bay of this F-450. With nearly 1,000 lb-ft of torque, it doesn’t just look cool, it runs hard as well.
When it comes to trucks, Jocko gets what he wants. The crew at DCS swapped the original 6.4L Power Stroke engine with a 6.7L Cummins that is far from stock. As a matter of fact, the Cummins churns out 472 hp and 979 lb-ft of torque (recorded on the Mustang dyno at Advanced Diesel Works), thanks to a Diesel Power Source compound-turbocharger setup that uses a DPS 62mm turbo over a BorgWarner S475. The boost is fed into the engine via an AFE Power intake manifold. A Fuelab lift pump feeds a stock injection pump and injectors. Justin at Advanced handled ECM tuning. The result is a truck that drives very well, does not suffer lag or other issues, and has greatly improved horsepower and torque while keeping lots of the factory parts in place for maximum reliability.
Because of the power increases and the fact that Jocko wanted an Allison transmission, a call was placed to ATS Diesel Performance in Arvada, Colorado. However, after some discussion with the diesel shop, Jocko ended up with an ATS-built 5R110 five-speed automatic transmission rather than the Allison. Interestingly, the stock Ford transmission control module still runs the transmission, thanks to reprogramming by Mike Dahlke at DCS.
The guts of the truck are fun to talk about, but the real story here is the double-throwdown, awesome look of this F-450. The exterior’s appearance is strong for a few reasons, including the flat-black American Force Strike wheels, which provide some contrast to the deep-black body color and add even more attitude. 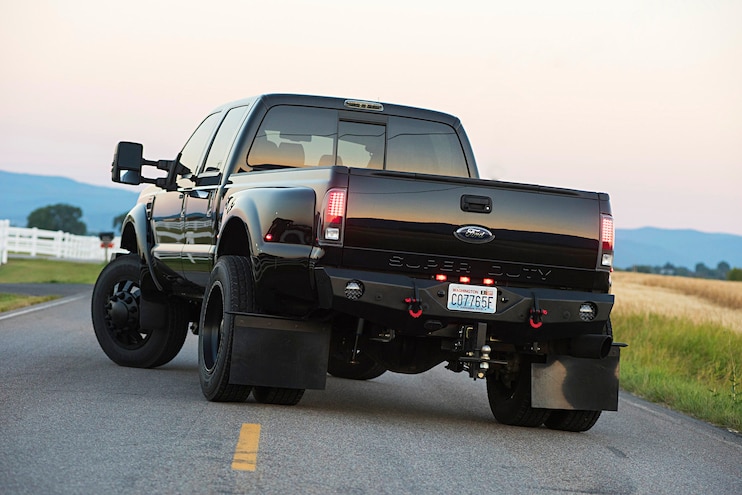 View Photo Gallery | 83 Photos
Photo 4/83   |   There are few sights in the truck world cooler than a dualie that’s been built to the standard this one has. The beautiful paint, the lift, the mean-looking black wheels, and those fabricated bumpers maintain an intimidating, all-business attitude.
Also, the small accents, like the red clevis hooks on the front bumper and small red Cummins logo on the grille, keep things interesting. The custom front and rear bumpers by Throttle Down Kustoms, especially the winch bumper up front, really put the final stamp on the truck’s burly persona. The one downside of black? You really have to work hard to keep it clean and fresh looking. That’s all part of the game for Jocko, though. “My vehicles get detailed every two weeks. I never let my stuff get dirty. I take a lot of pride in making sure all my cars and trucks are taken care of,” he says. 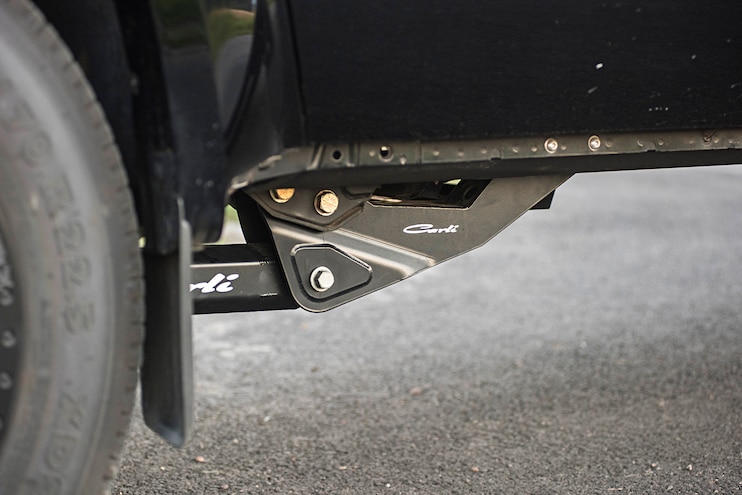 View Photo Gallery | 83 Photos
Photo 5/83   |   The Carli suspension system plays a big part in making this truck look the way it does. With enough lift to give it more presence yet not appear over the top, the big dualie’s looks are enhanced.
Not happy with stopping at the styling and engine modifications, Jocko had the big Ford lifted and fitted with larger rolling stock as well. This is another area where Jocko does not accept shortcuts. “Lots of people can lift a truck, but there are not that many people who can lift one the right way,” Jocko explains. “I love having a lifted truck that rolls on big tires and rides like it did when it left the factory; nothing rubs, and it doesn’t wear out steering and suspension parts.” The F-450 has a 4.5-inch Carli Suspension lift with King Off-Road Racing Shocks 2.5-inch shocks on all four corners. The setup provides both the altitude and the driving experience Jocko desires. Another big piece of the performance package is the addition of 4.56 gears for the front and rear axles. “I think one of the biggest things people miss when they lift trucks and put larger wheels and tires on is making that gear-ratio change,” Jocko says. “You can really hurt the truck’s performance if you don’t take that step and upgrade the gears to compensate for the taller tires.” The physics certainly agree with him there!
Ultimately, this rig did not turn out so great by accident. It is the product of the work of talented craftsmen and an owner who maintains a high standard of quality and a strong vision of what he wants the end product to be. When those things come together, the result is exactly what you see here: perfection. 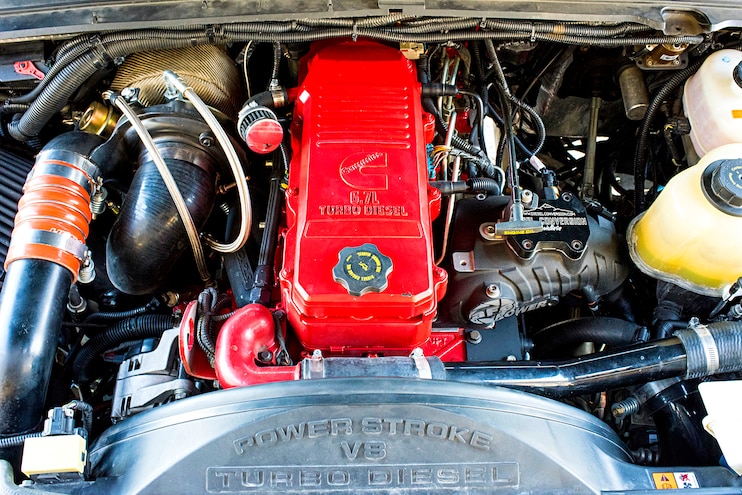 View Photo Gallery | 83 Photos
Photo 6/83   |   There were less than 5,000 issue-free miles on the 6.4L Power Stroke when Jocko bought this truck. He drove the rig from New York, straight to Diesel Conversion Specialists in Montana, where the engine swap was performed. That’s serious dedication! 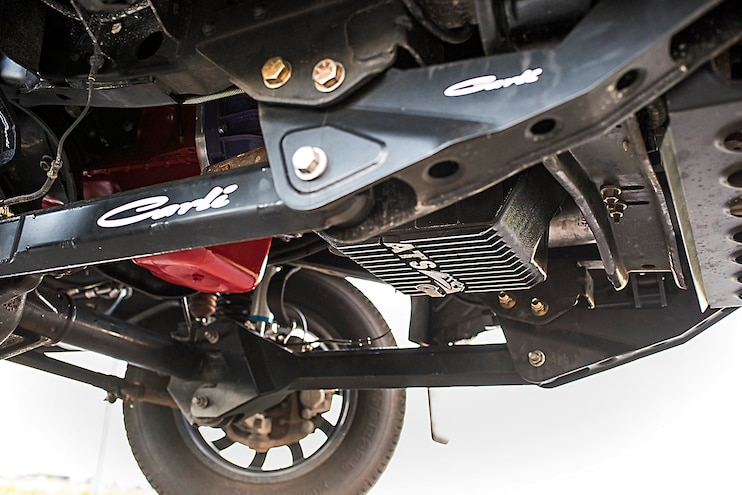 View Photo Gallery | 83 Photos
Photo 7/83   |   That ATS Diesel Performance transmission pan is not just there for looks. An ATS-built 5R110 five-speed automatic transmission backs the Cummins. Interestingly, that transmission is controlled by the stock Ford transmission control module, which has been reprogrammed by Diesel Conversion Specialists. 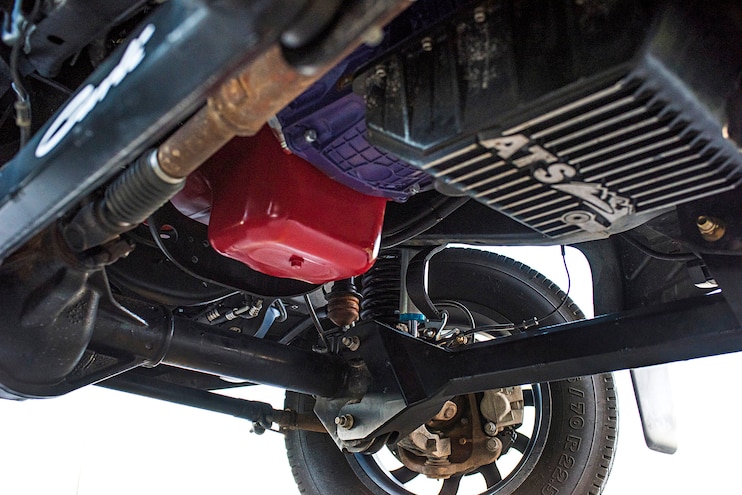 View Photo Gallery | 83 Photos
Photo 8/83   |   The beefy front control arms for the Carli suspension are front and center here. The F-450 is built Ford tough at the factory, but these pieces are virtually bombproof. Because Ford has stuck with the solid-axle front end in its trucks, lifting and modifying the suspension under them is very straightforward. 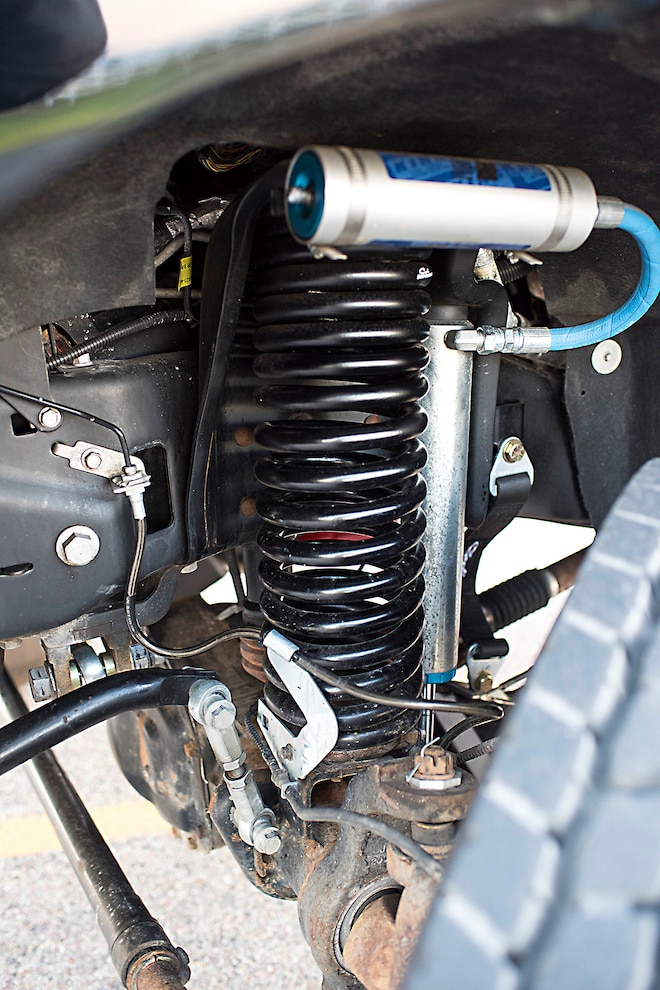 View Photo Gallery | 83 Photos
Photo 9/83   |   This tall coil spring is one of the integral pieces that holds the truck at the proper height, but the King Off-Road Racing Shocks 2.5-inch, remote-reservoir shock is the brains of the operation. The shocks define the ride quality of the truck. Making the wrong choice here would have taken lots away from the fun rig this truck has become. 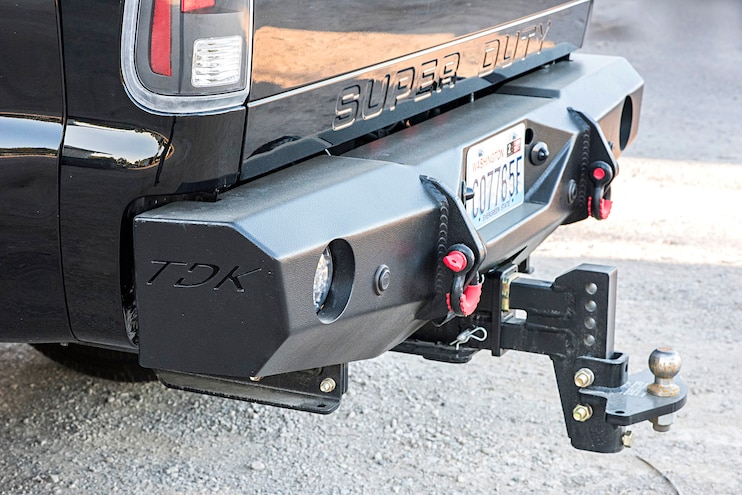 View Photo Gallery | 83 Photos
Photo 10/83   |   Throttle Down Kustoms makes the fabricated bumpers that are mounted on both ends of this truck, and they look like they can be used to drive through a building and emerge unscathed. Big, beefy bumpers for a big, beefy truck. The welding quality is obvious. 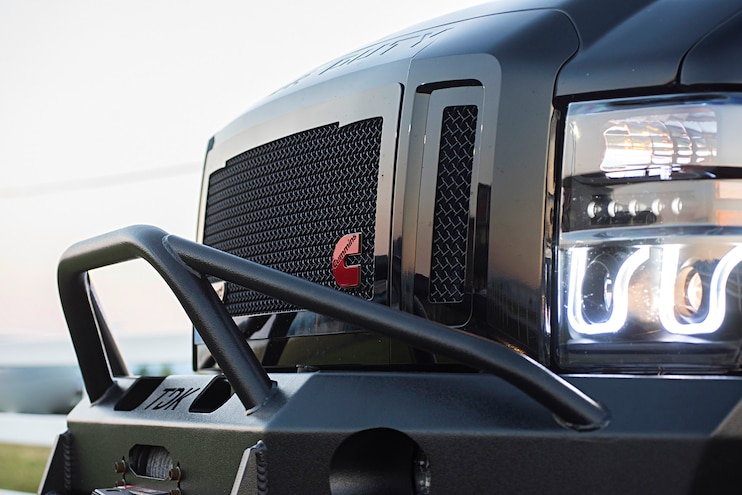 View Photo Gallery | 83 Photos
Photo 11/83   |   Astute diesel performance enthusiasts will recognize the sound of the inline-six Cummins engine as this big Ford draws closer. However, for those who are not 100 percent in the know, the only real exterior callout on the whole truck is this little red Cummins badge on the grille. View Photo Gallery | 83 Photos
Photo 12/83   |   As much as the truck has been changed mechanically, tweaked in the chassis and suspension, and altered on the exterior, the interior is just as luxurious as Ford intended when the rig was assembled, plus a couple of gauges. 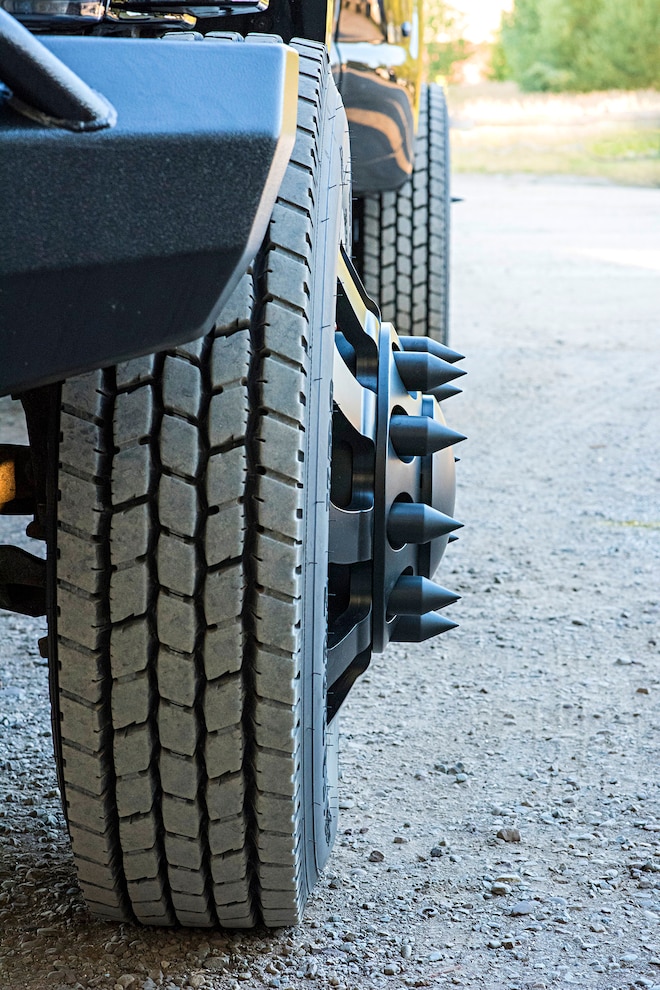