The Cheapest Haulers You Can Buy New in the U.S. 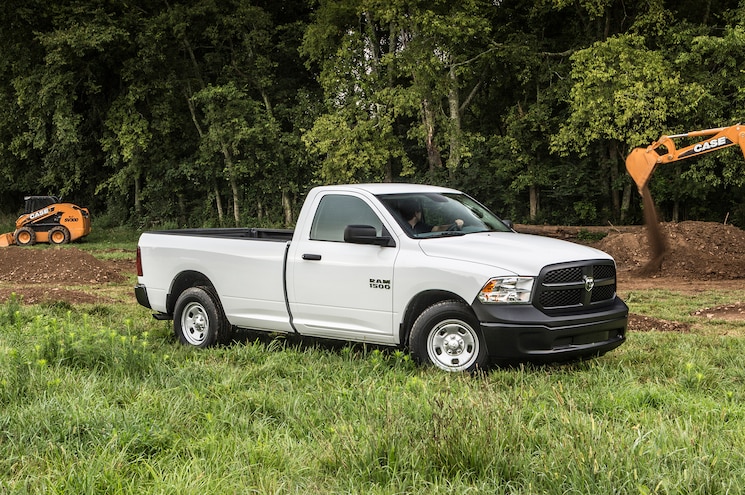 We hear it from you, our readers, all the time, and it was also a common comment at the 2017 Pickup Truck of Year contest: new trucks are too expensive. We’re inclined to agree. While we’d all love to own $65,000 King Ranches, Denalis, and Laramie Longhorns, for most of us, anything more than $40,000 is a major financial commitment. So we went on a quest to configure the absolute cheapest 2017 new trucks we could. We also found there were quite a few national and regional special offers, which can lower the purchase price even further, not to mention some shrewd and/or aggressive negotiating on your part.
Keep in mind these models are not going to have Shiatsu-massage virgin calf leather seats and lamb’s wool carpeting. We’re talking bare-bones workhorses here. However, all include the basics of power steering, air conditioning, and AM/FM radio, most with a USB input. Many also include standard power windows and even remote door locks. So if you’re on the hunt for just a bare-basics work truck, here are the cheapest models available from all of the major manufacturers. Note: Accompanying photography may not correspond exactly to the lowest-priced model.
2017 Nissan Frontier King Cab S - $19,930
Can you get a new truck for less than $20,000? Thanks to Nissan, the answer is yes. You can get yourself into a new 2017 Nissan Frontier for $19,930, including $940 destination. According to Nissan’s online configurator and search tool, it seems there are still plenty of 2016 Frontiers in stock, which can be had for an even better deal. The 2017 is fundamentally unchanged from when the current-generation Frontier was first introduced in 2005, except for some minor trim and equipment changes. The one advantage to buying a new model is Nissan’s 5-year, 100,000-mile bumper-to-bumper warranty.
However, don’t expect a lot of driving excitement with the strippo Frontier. The base 2.5L I-4 produces a modest 152 hp and 171 lb-ft of torque. If that sounds low for a nearly 2-ton truck, it is. We’re not going to lie, the power is barely adequate in our book. You have to step up to the SV trim to get the 4.0L V-6. But with 109 more horsepower and 110 lb-ft more torque and a minimal fuel economy penalty, we suggest you dig a little deeper between your sofa cushions to come up with the extra scratch for the V-6. It’s well worth it. 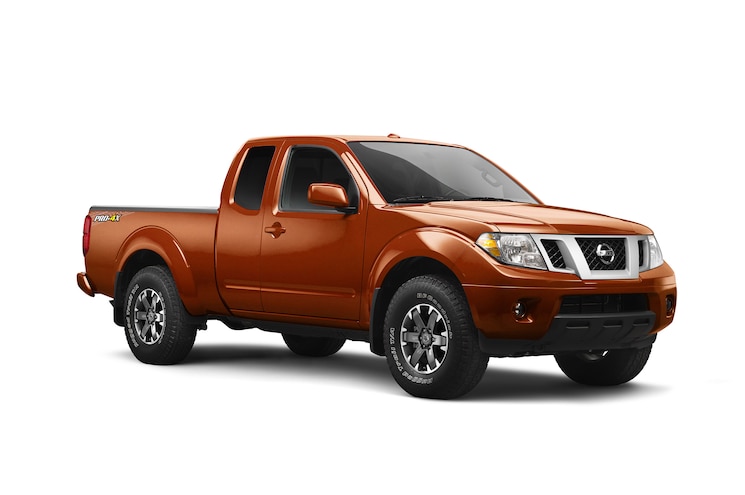 View Photo Gallery | 11 Photos
Photo 2/11   |   2017 Nissan Frontier King Cab
2017 Colorado Extended Cab Base 2WD - $20,995
Minus the $995 destination charge, the starting price on the 2017 Chevy Colorado is $20,000 exactly. Equipment largely mirrors that of the Canyon SL. However, if you have the need for more than two passengers, you’ll have to pony up a little more for the WT trim, as the base trim ditches the rear seat altogether, making the rear seating area into enclosed storage. As with the Canyon, it’s not at all hard to get a Colorado to well over $40,000 with all the goodies on it. However, if you can exercise Zen-like self-restraint with the options sheet, and can live with steel wheels, you can get yourself a Colorado for just a tad above $20k. 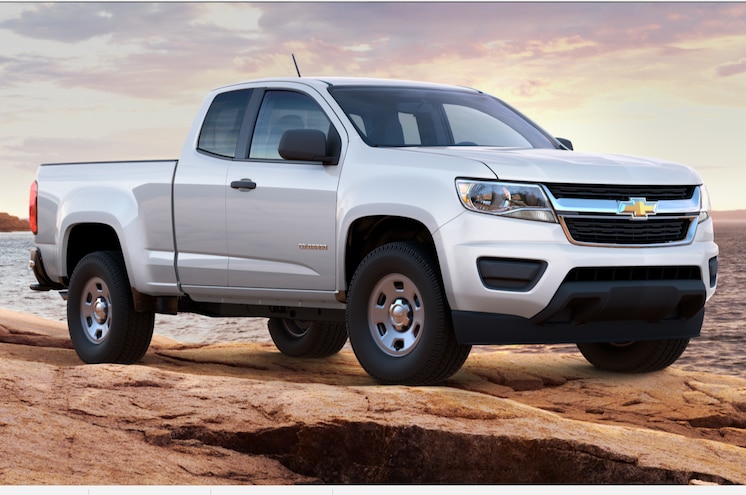 View Photo Gallery | 11 Photos
Photo 3/11   |   2017 Chevrolet Colorado Base Extended Cab
2017 GMC Canyon SL 2WD - $21,885
Although just below $22,000 including $995 destination, the Canyon still offers a pretty good deal for a midsize truck. Even the base trim SL offers standard power windows, four-wheel disc brakes, air conditioning, a six-speaker sound system with USB input, a power driver seat with manual recline. Although the Canyon weighs a somewhat chunky 3,944 pounds even in base trim, the 200 hp 2.5L I-4 is up to the task when paired to the standard six-speed manual transmission and 4.10 rear axle ratio. The base I-4 also happens to be the only configuration you can get with a stick shift, so if you’re a die-hard devotee of the row-your-own-gears philosophy, then it’s your sole choice.
To get the 308 hp 3.6L V-6, you have to step up to the eponymous “Canyon” trim, which also brings the price up to $26,985. Well out of bargain-basement territory, but still not a bad deal. While the V-6 is clearly more powerful, and likely the one most of the Truck Trend staff would select over the base I-4, the standard engine isn’t so hopeless we would discourage anyone from considering it. 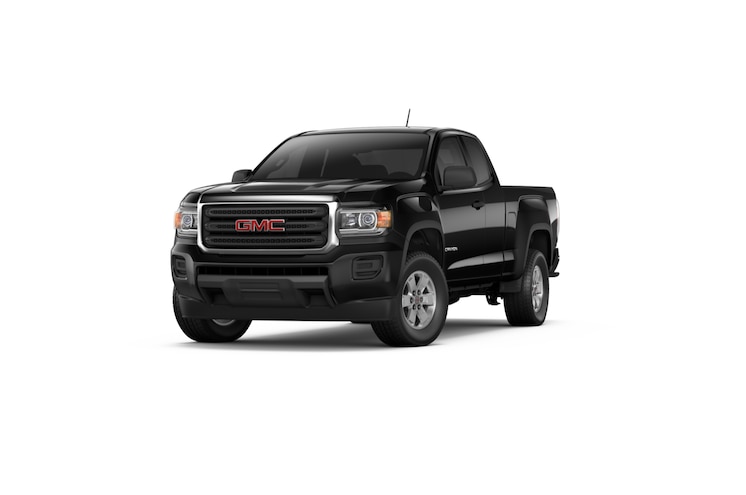 View Photo Gallery | 11 Photos
Photo 4/11   |   2017 Gmc Canyon Sl Extended Cab
2017 Toyota Tacoma SR Access Cab 2WD - $23,565
Getting a new 2017 Toyota Tacoma requires some real money, in this case $23,565, including $960 destination. Interestingly, the 2WD Tacoma is only available with a six-speed automatic transmission. To get a manual with the I-4, you have to get a 4x4, and lose a ratio for a five-speed. If you step up to the V-6 model, the stick is a six-speed. The base 2.7L I-4 has been around for more than a decade and carries over largely unchanged from its predecessor, other than now being mated to a six-speed automatic instead of a four-speed.
Like the I-4 Frontier, don’t expect blazing acceleration from the four-pot Taco. However, you can expect some of the highest historical resale values in the industry. The Tacoma’s legendary resale is great when the original owners decide to sell but not as sweet a deal for used buyers. However, Toyota’s also-legendary durability and reliability ensures that these trucks will still be barely broken in at 60,000 or 100,000 miles, assuming they’ve had basic maintenance, making them good for another 100,000-plus miles of use. 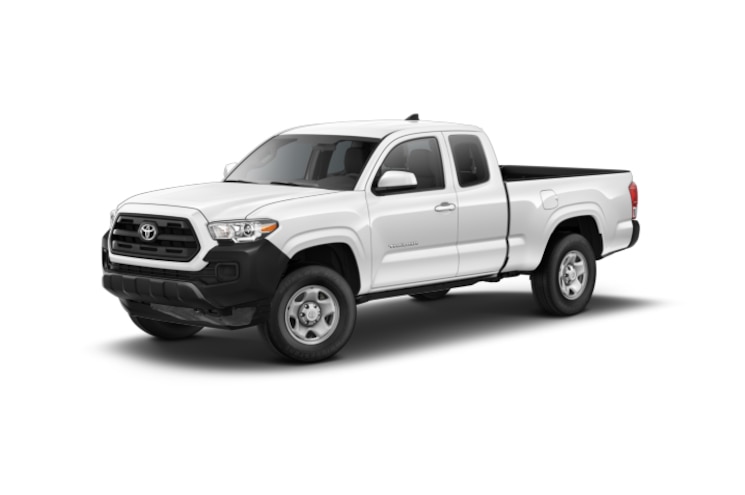 View Photo Gallery | 11 Photos
Photo 5/11   |   2017 Toyota Tacoma Sr Extended Cab
2017 Ram 1500 Tradesman Regular Cab 2WD - $27,715
Before available rebates and incentives, the Ram 1500 Tradesman goes for $27,715, with the strong 305-hp 3.6L Pentastar V-6 and eight-speed automatic. However, Ram is famous (or notorious) for offering sweet incentives and offers bringing the purchase price down considerably. In our region of Southern California, with all combined offers, we were able to get a smokin’ deal of $23,465. With that extra money in your pocket, the 395 hp 5.7L Hemi V-8 looks like a tempting deal at only $1,750, including the beefed-up 8HP70 transmission. At the time of this writing, Ram was offering a combined $4,750 off the Ram 1500 Tradesman regular cab with the Hemi for an almost unbelievable deal of $24,715. Excuse us while we go buy a new truck… 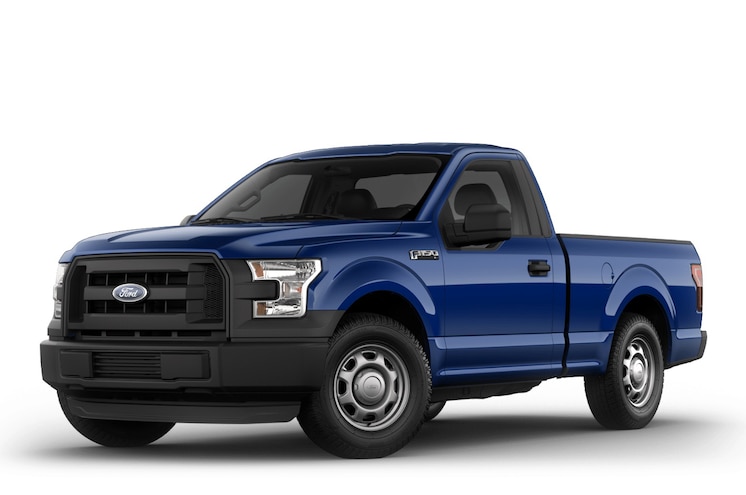 View Photo Gallery | 11 Photos
Photo 7/11   |   2017 Ford F 150 Xl Regular Cab
2017 Chevrolet Silverado 1500 WT Regular Cab 2WD - $28,390
The Silverado 1500 regular cab is about on par with the F-150 in terms of base MSRP, and special offers are similar. Just out of curiosity, we selected the ubiquitous (but no less excellent for it) 5.3L V-8, which brought the total to $29,585 before offers, and $27,085 after available offers. Not that the base 285 hp 4.3L V-6 is chopped liver, but the 355 hp V-8 is clearly the way to go in terms of smoothness and power. Fuel economy is also nearly a wash between the two, so given the choice, we’d get the V-8.
Even in humble WT trim, the Silverado offers a 4.2-inch color audio display, 150-amp alternator, four-wheel Duralife anti-lock disc brakes, air conditioning, standard power door locks, cruise control and locking tailgate. Power Windows and a 110 volt AC power outlet are included in the WT convenience package, which strikes us as a reasonable deal for $1,150, which also includes tinted glass, a rear vision camera, remote keyless entry and remote-locking tailgate, and heated exterior rearview mirrors. 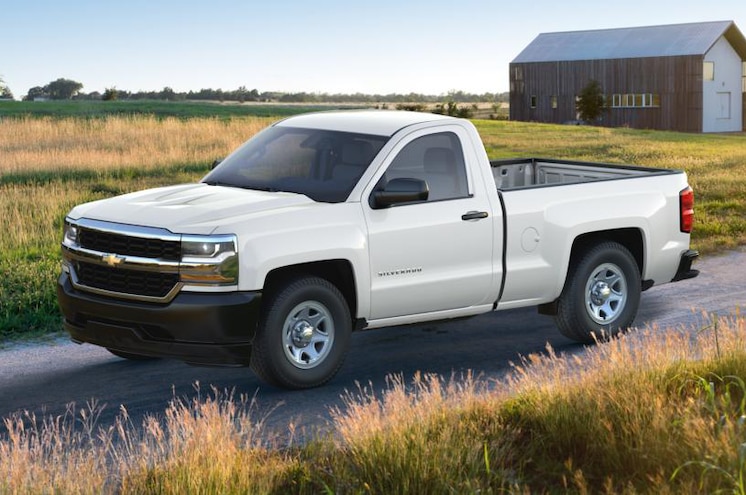 View Photo Gallery | 11 Photos
Photo 8/11   |   2017 Chevrolet Silverado 1500 Wt Regular Cab
2017 GMC Sierra 1500 Regular Cab 2WD - $29,500
What applies to the Silverado 1500 also applies to the Sierra 1500. Other than a different grille and exterior lighting, the trucks are mechanical clones. Some buyers are loyal to GMC over Chevy, and that’s fine, although there is a modest premium for it. At the time of this writing, there was also about $2,000 off MSRP, bringing the price down to around $27,500. If you’re patient, persistent, and willing to play competing dealers against each other, you can probably get a little lower than that. The 5.3L V-8 is the predominant engine available at dealers however the 4.3L V-6 has become more common and popular since it got an all-new design for 2014. Either is a perfectly acceptable choice. 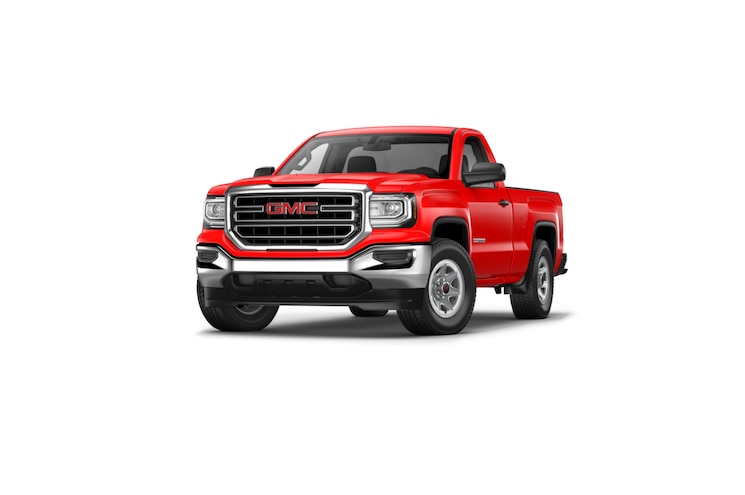 View Photo Gallery | 11 Photos
Photo 9/11   |   2017 Gmc Sierra 1500 Regular Cab
2017 Nissan Titan S Single Cab 2WD Long Bed - $30,775
The Titan, along with the Tundra, have the distinction of being the only trucks on this list with a standard V-8 engine. However, that doesn’t necessarily mean they’re the lowest-priced V-8 fullsize trucks you can buy. As noted, the V-8 option runs between $1,150 to $1,750 on the domestic models and is usually available à la carte, meaning it’s not hard to get a V-8 fullsize for less than $30,000. However, in Nissan’s case, even the stripper Titan S comes well-equipped with Bluetooth hands-free calling, power windows and door locks, pushbutton start, USB audio connection, and steering wheel-mounted audio controls. We had a bare-bones Titan XD on our 2017 Pickup Truck of the Year test, and although it had nary an option on its build sheet, most of the judges thought the level of equipment was reasonably adequate. 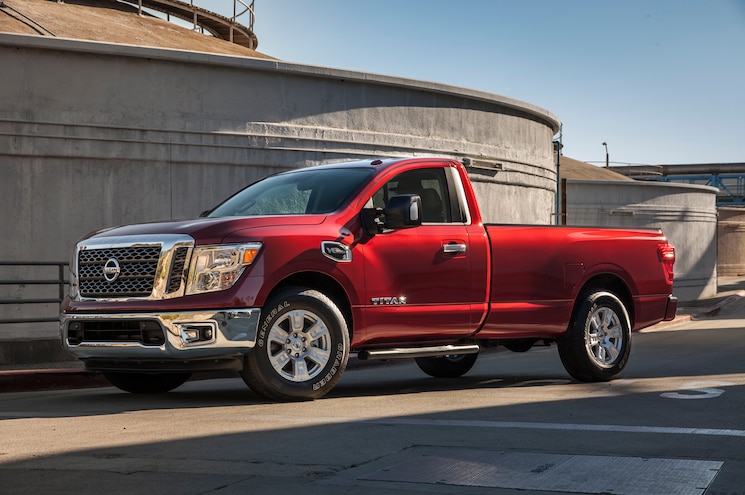 View Photo Gallery | 11 Photos
Photo 10/11   |   2017 Nissan Titan Single Cab
2017 Toyota Tundra SR 2WD - $30,935
At more than $30,000, the Tundra, even in base SR form, strains the definition of “cheap.” In previous years, the Tundra was available with the regular cab and 6.5-foot bed. The “shorty” model has been dropped from the lineup, and if you want the regular cab now, you’re forced to get the long bed. Interestingly, that also “forced” us to get the 5.7L V-8 rather than the base 310 hp 4.6L V-8. The 4.6 Tundra is somewhat of a unicorn on Toyota dealer lots, since the vast majority of Tundras are equipped with the 5.7L V-8, regardless of trim.
You don’t have to twist our arm too hard to “settle” for the 5.7. It’s a fast, quick-revving and smooth engine that shrugs off almost anything you can throw at it. Unfortunately, it also has a well-deserved reputation for being one of the thirstier V-8s in the fullsize market, rated at 13 mpg city and 18 mpg highway, well below the current class leaders. 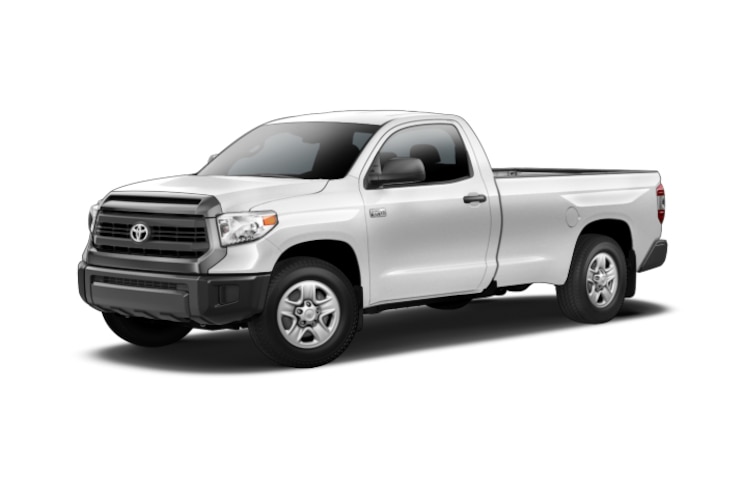