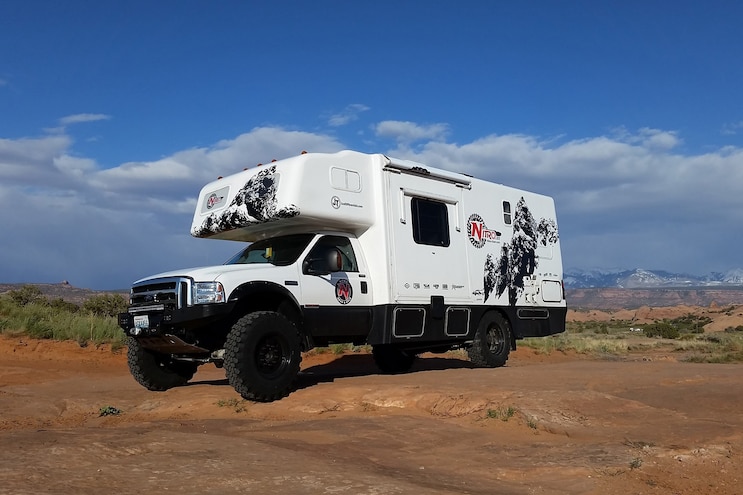 While horsepower and torque typically head the list of qualities, capabilities, and other criteria that come to mind when we think about diesel engines, another more important word, “freedom,” seldom does.
Carl Montoya’s ’04 Ford F-450 Xplorer Xcursion RV is a running, driving, Cummins-powered freedom machine that carries him over territory few motorhomes would ever be able to navigate—to places some folks will never have the pleasure of experiencing. The rig does so thanks to an engine swap and some crafty upgrades that take this machine from mildly capable to virtually unstoppable. There aren’t many trucks Diesel Power has featured designed to do what this one does, and that’s what makes it so interesting. 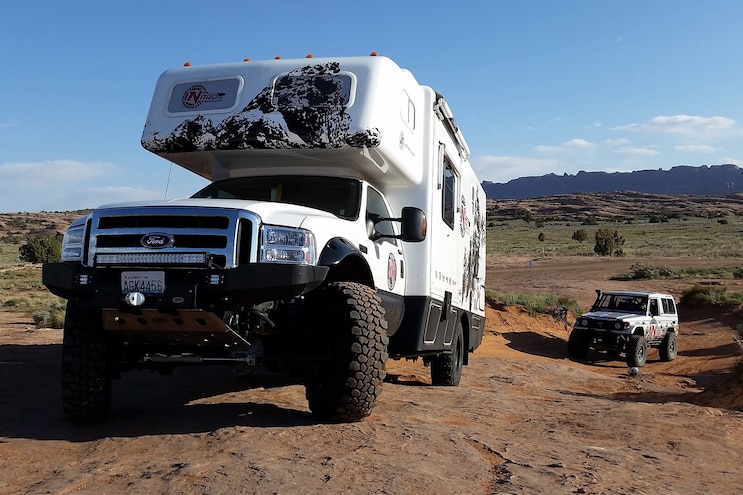 View Photo Gallery | 74 Photos
Photo 2/74   |   This is exactly what Carl Montoya envisioned when upgrading his ’04 Ford F-450–based RV. It’s a capable off-road machine that’s powerful enough to tow his trail rigs and fit enough gear to support him living completely off the grid whenever he wants.
To understand this truck, we first need to understand its owner. Carl Montoya is the proprietor of Nitro Gear and Axle and a lifelong lover of the outdoors. When it was time to look for a vehicle that would be good for his business and his lifestyle, the idea of a four-wheel-drive motorhome was perfect for him. Carl wasn’t looking for something he could take rockcrawling, but he wanted something that would handle mild off-road situations and take him to the places where living “off the grid” was truly off the grid. “When I first found this rig, I was looking for a four-wheel-drive diesel RV,” Carl says. “Most of the motorhomes out there have gas engines and are built with lighter-duty chassis than this F-450–based truck. They are limited in their towing capacity because of their weight, and they can’t support the things I want to do.”
Things were looking up when Carl located this Xplorer Xcursion in Montana with only 19,000 miles on its odometer. “The RV had a 6.0L Power Stroke engine in it that was having the common head-gasket issues those engines have,” Carl explains. “I got the truck for a good price and had the engine gone through with all the typical fixes, like head studs and other upgrades. My plan was to leave that engine in the RV for the long haul.” 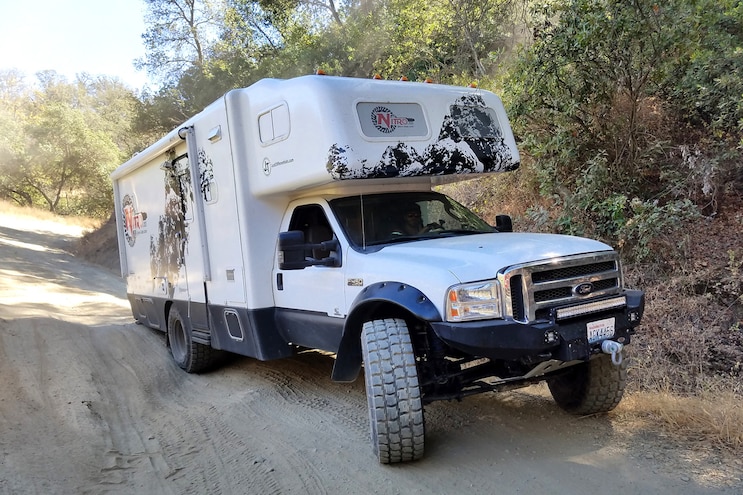 View Photo Gallery | 74 Photos
Photo 3/74   |   Navigating the trails in a rig this big and long can be tricky. But, with forethought and good driving, Carl manages to keep trail rash to a minimum. He also has to be careful not to launch the groceries out of the cabinets!
That plan didn’t come to fruition, unfortunately, and Carl made a very significant change out of sheer frustration. “The 6.0L Power Stroke engine was a constant source of problems for me. Every time I would go somewhere, I was having these little problems that were random. Sensors and other components were failing,” Carl says. “Finally, we were on the way to an event in Moab (Utah), and it was blowing coolant out of the exhaust whenever we climbed steep grades. The truck only had 43,000 miles on it, and I knew I needed to do something.”
After the event, Carl reached out to Diesel Conversion Specialists in Montana. The timing was perfect, because they told him to bring them the rig and they’d get on it immediately. After gingerly driving the truck to the shop, Carl discussed the build with the team at DCS, and they decided to use a 6.7L Cummins diesel engine for the RV. “The 6.7L was a little more challenging for the DCS team to work with, but they learned some things along the way, and it was the right move,” Carl says. 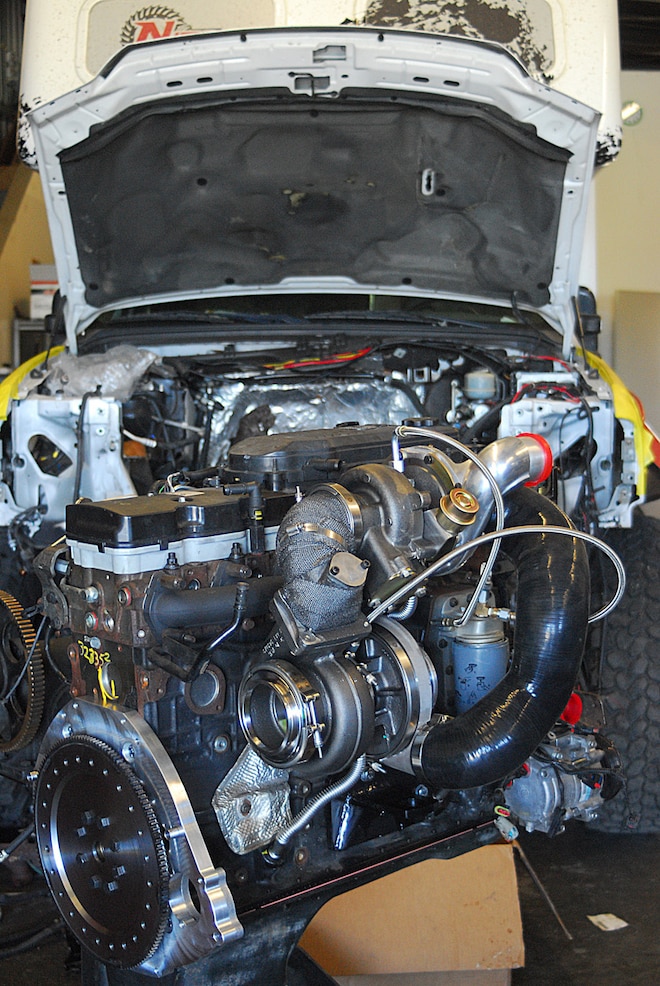 View Photo Gallery | 74 Photos
Photo 4/74   |   Diesel Conversion Specialists performed the engine swap. The troublesome 6.0L Ford Power Stroke was ditched in favor of a rock-solid 6.7L Cummins. The truck uses an ATS Diesel Performance 5R110 five-speed automatic transmission with a reprogrammed Ford controller.
“The extra displacement and the Diesel Power Source compound turbochargers, along with the other upgrades, really make the engine a stout piece. With the truck’s gearing and other upgrades, the Ford engine was not lacking power, but I just could not deal with the reliability problems.”
When Carl got his RV back a month later, it was love at first fire-up. “The Power Stroke needed to be revved to make power, and the transmission was shifting all the time,” Carl remembers. “This Cummins likes to lug along, and it delivers incredible fuel mileage. I have seen 13.8 mpg when not towing and an average of 10 to 11 mpg when towing a trailer. The hilarious thing is that I get about 10 mpg when I drive my Land Cruiser by itself. When a vehicle with a combined weight of about 26,000 pounds is getting the same mileage, that’s pretty awesome.” 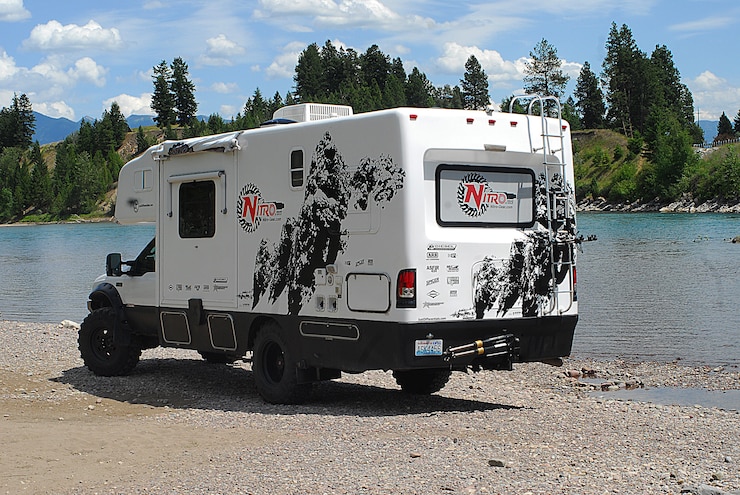 View Photo Gallery | 74 Photos
Photo 5/74   |   It’s pretty clear why everyone from old ladies to four-wheel-drive enthusiasts and outdoorsmen love this RV. It isn’t just a motorhome with big tires, it is a diesel-powered overlander that can take Carl and up to five other people to places like this.
The engine isn’t the only nontraditional piece of F-450 hardware that supports Carl’s motorhome. “Until 2004, the F-450 used the same front axle as the F-250 and F-350. However, in 2005, Ford went with an axle that is coil sprung and 6 inches wider,” Carl explains. “The axle is bigger and beefier in many respects, but it was also redesigned to give more steering angle. The RV now has a tighter turning radius than many pickup trucks because of the axle swap. We added a 2-inch leveling spacer to the front end when we did the swap. The rear has 12,000-pound springs and a custom-machined lift block.” The wheels are reversible Buckstop 20-inch wheels, mounted on 41-inch-tall Goodyear G275 MSA military pieces. With the axle, it’s a package that solved a ride-quality problem that needed to be remedied.
By now, you have figured out Carl isn’t the type of guy who likes to pull into the local campground and simply plug in his RV. “This is a very versatile truck, and I have lived in it for months at a time,” Carl tells us. “It is designed to be self-supporting. It carries 100 gallons of fresh water, it can sleep six people, and the only real challenge that crops up is keeping things from freezing when it is subzero outside.” While the truck gets plenty of use at industry events and gatherings, it isn’t just the diesel fans or hard-core gearheads who enjoy it. “The crazy thing about this RV is that everyone loves it,” Carl says with a laugh. “Grandmothers, kids, and even people who would probably not be considered diesel enthusiasts like it. Most people dig it for the off-the-grid persona the truck exudes.” 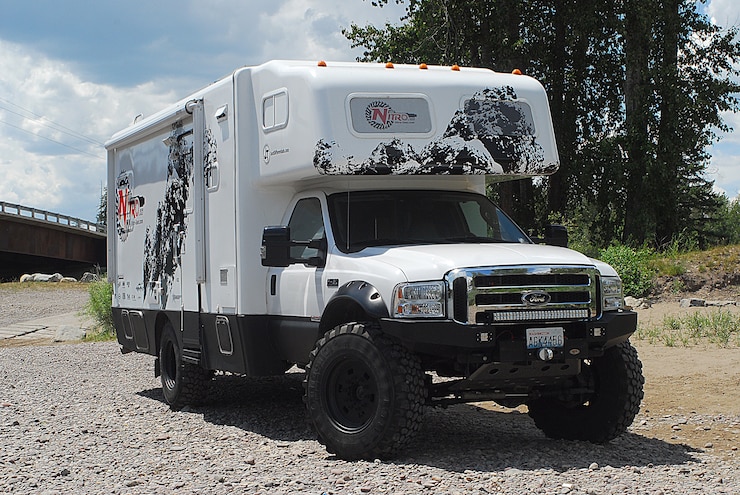 View Photo Gallery | 74 Photos
Photo 6/74   |   With the aerodynamics of a small building, the assumption is that fuel mileage would be horrible. It isn’t. Carl has seen 13.8 mpg on the highway, and mileage while towing is typically 10 to 11 mpg. That’s a total of 26,000 pounds when he’s pulling his trail rig!
One thing Carl isn’t trying to do is make a habit of hitting hard-core trails. “You do have some of the RV element to deal with: drawers and cabinets that can open up on side angles. There’s also the fact that this is a long and tall vehicle with lots of overhang,” Carl explains. “I followed a Jeep Rubicon on a trail that was probably more hard-core than I expected it to be. Lifting a wheel in a vehicle that weighs 17,000 pounds is cool, but you don’t want to do it a lot because it can be punishing on the chassis with all that weight. The rear overhang can be a problem in big trail dips and coming off of rocks as well.”
If you live in the Pacific Northwest and you happen to see the coolest F-450–based RV you’ve ever laid eyes on rolling down the highway and you are not driving a four-wheel drive, don’t follow Carl Montoya. Once the pavement turns to dirt, this diesel rig shines, and you’ll be left wondering where the big beast went. Diesel performance is one thing, and diesel freedom is another. Thanks to thoroughly researched modifications and a complete repower, this rig has high levels of both. 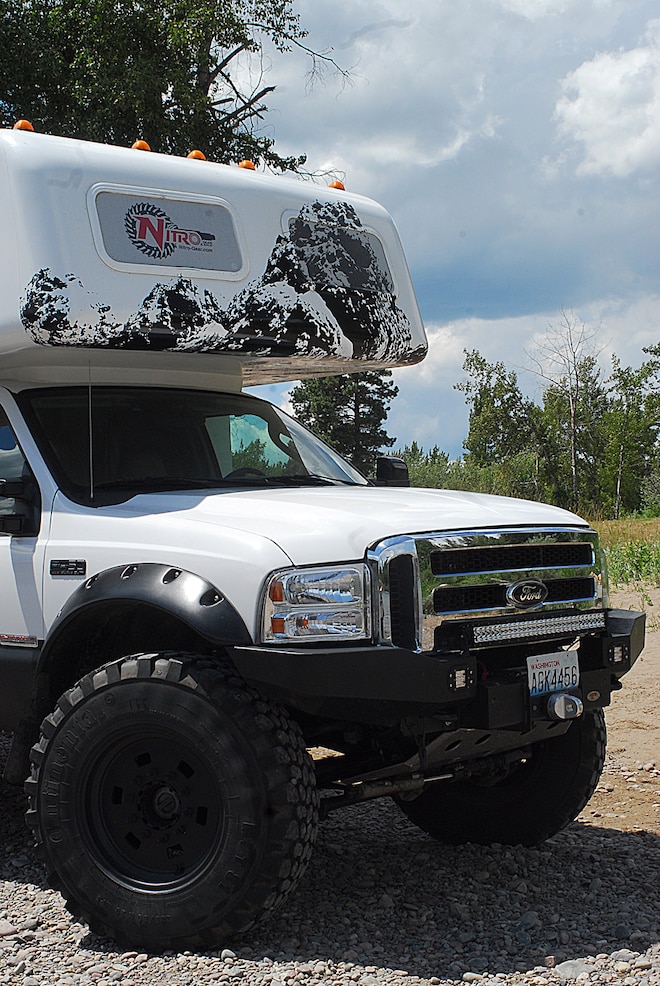 View Photo Gallery | 74 Photos
Photo 7/74   |   The Bushwacker fender flares are in place because of the truck’s front-axle swap. By using an ’05 Dana 60, the track width is increased by 6 inches. Ironically, the turning distance is shorter due to the axle’s more modern design. 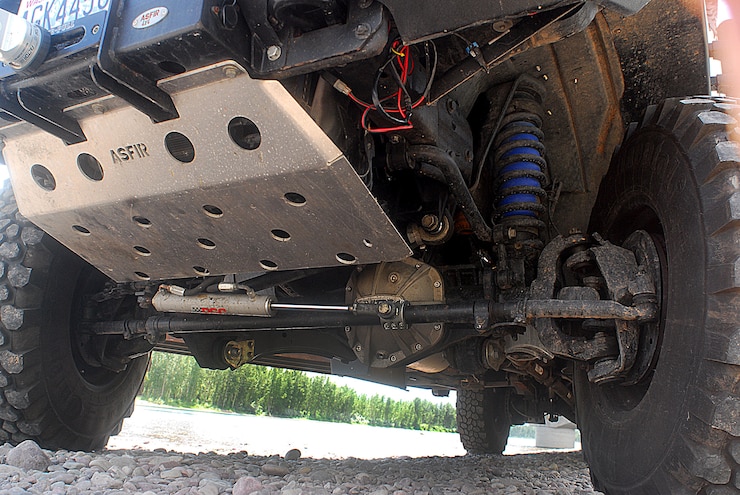 View Photo Gallery | 74 Photos
Photo 8/74   |   The axle swap also created a change from leaf to coil springs in the front. Here we can see the beefy ASFIR 4x4 skidplate and the Performance Steering Components hydraulic ram in the steering system and the Nitro Gear and Axle beefy differential cover. 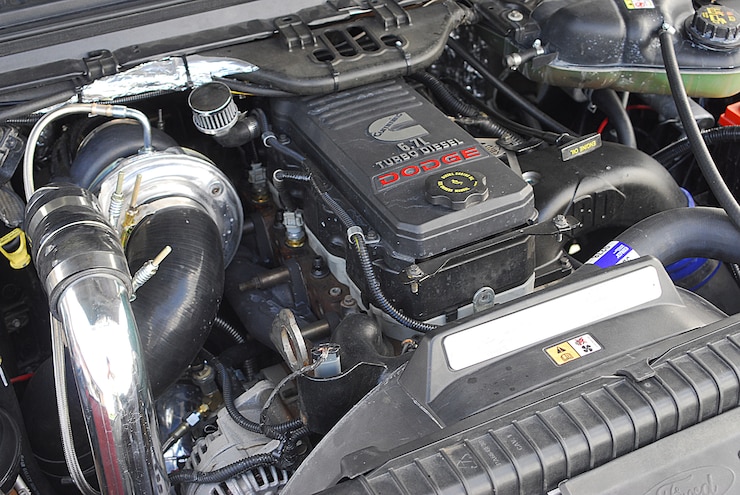 View Photo Gallery | 74 Photos
Photo 9/74   |   Diesel Conversion Specialists did its normal ultra-sanitary job on this swap. The 6.7L Cummins looks like it should be a factory option in this Ford. Carl is extremely happy with the truck’s increased power and better driving manners. 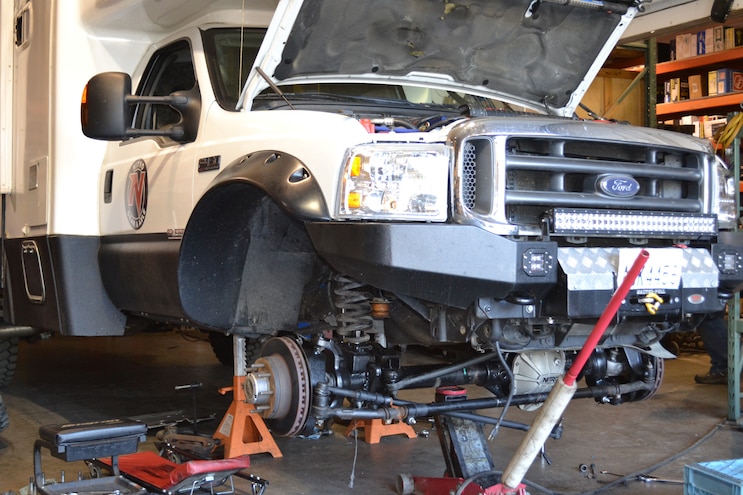 View Photo Gallery | 74 Photos
Photo 10/74   |   This photo clearly illustrates the increased width of the Dana 60 axle. Other than the Cummins swap, this is Carl’s favorite modification. 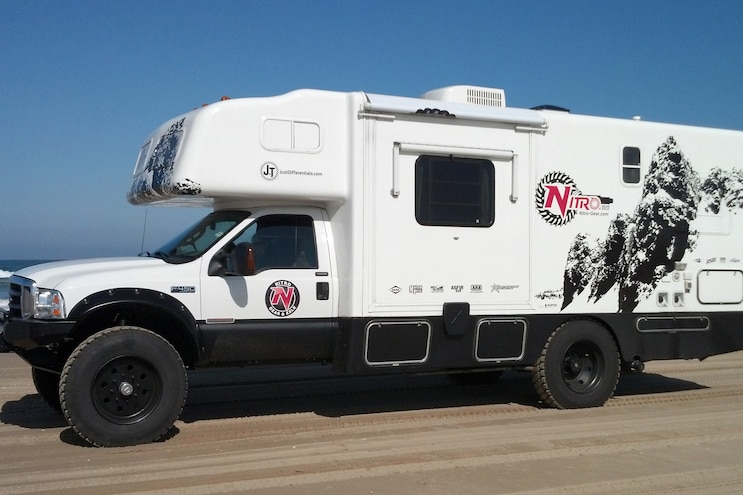 View Photo Gallery | 74 Photos
Photo 11/74   |   With a 600-mile fuel range, 100 gallons of fresh water on board, and all the comforts of home, Carl has actually lived in this rig for months at a time. He’s in it almost every weekend, adventuring or attending events and shows for Nitro Gear and Axle. 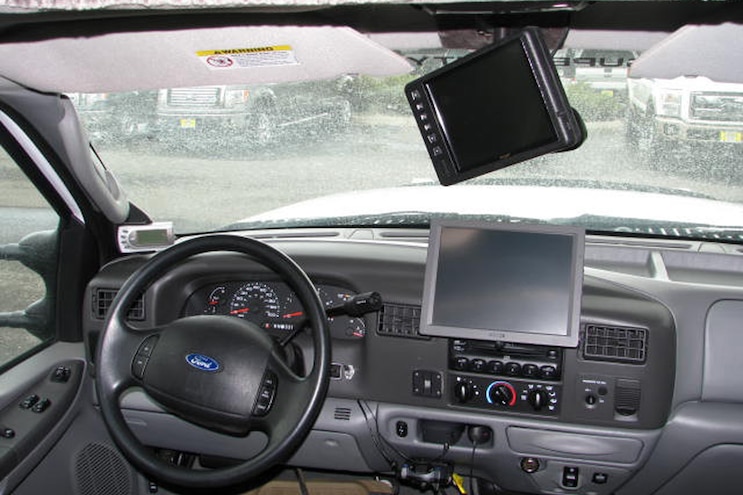