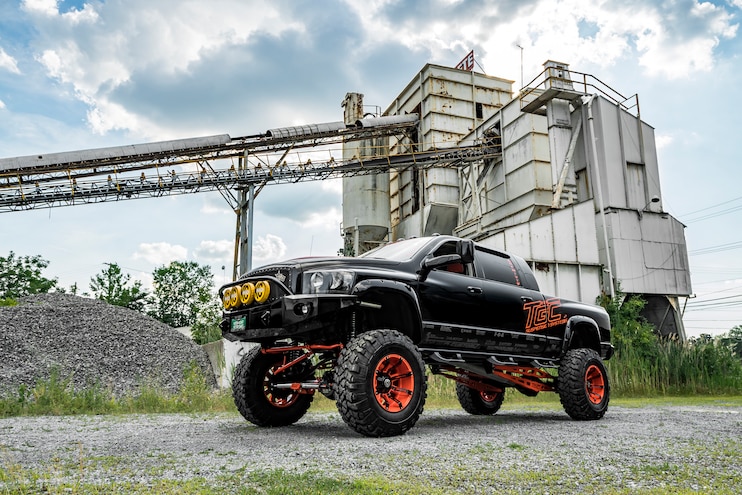 Travis Poirier bought his ’08 Dodge Ram 2500 Mega Cab in 2011 and used it as a daily driver for three years before deciding to turn it into an off-road billy goat for the whole family. But an excursion through the tight, confined spaces of Vermont’s backcountry caused $5,000 worth of damage—during a charity off-road event, no less! After that, Travis altered his goal, transforming the truck into an engineering masterpiece, award-winning show truck, and daily-driven family hauler.
“Robby Bryant was my inspiration to build a truck like this,” Travis says. “I saw his Head Hunter SEMA build on N-Fab’s website, and that’s when I started looking at what he was designing and building.” 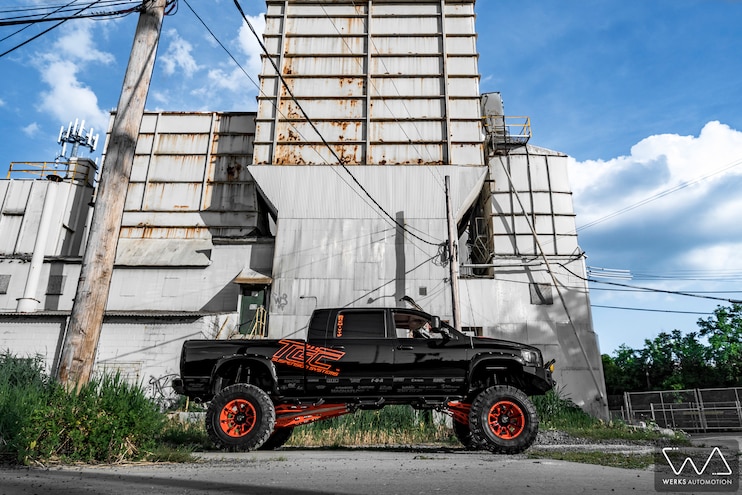 View Photo Gallery | 62 Photos
Photo 2/62   |   2008 Dodge Ram Road King Side
But he wasn’t going to straight-up copy another guy’s hard work. Travis took the things he loved about the show truck scene, added his own off-road and custom expertise, and applied them to his Ram, carefully selecting parts and accessories to offer the world something new.
Case in point is the Dodge 2500’s four-link rear suspension. “Up until this past year, pretty much every four-link design was using the leaf-spring perch, which makes the truck look really goofy and weird,” Travis says. “But I used two traction bars to create a true four-link design with a track bar.” 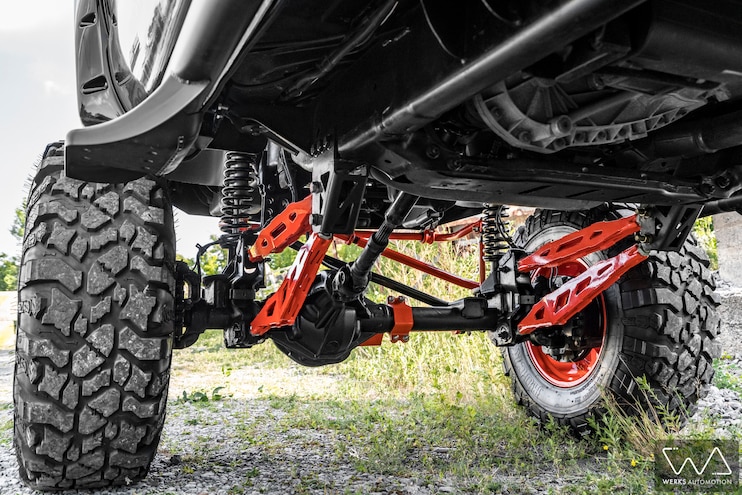 View Photo Gallery | 62 Photos
Photo 3/62   |   2008 Dodge Ram Road King Suspension
The system, which was custom-fabricated by Top Gun Customz, gives the truck a much nicer ride on the road, because the bars are longer. Travis won’t cop to anything illegal, but he’s extremely confident in saying his truck would feel very stable at more than 100 mph, the speed his import-tuner buddies like to travel. Not that he’s ever tried it. No, sir.
The unique four-link rear suspension is paired with a front long-arm kit that provides 14 inches of lift (also by Top Gun Customz). F-O-A 2.5-inch coilover shocks all around keep the Ram riding smooth and stable, no matter the terrain, and a Top Gun Customz dual steering stabilizer and F-O-A emulsion shocks cure the death wobble that plagues big, lifted Dodges. View Photo Gallery | 62 Photos
Photo 4/62   |   2008 Dodge Ram Road King Front
The suspension is paired with a powerful 5.7L Hemi drivetrain, which remains mostly stock (for now). An S&B cold-air intake, American Racing Headers, and Magnaflow exhaust keep the Ram 2500 breathing easy for extra power. Adding even more oomph to the setup are a DiabloSport Trinity programmer and Snow Performance MPG-MAX water-methanol injection system. Mag-Hytec differential covers and an Odyssey battery provide added performance and protection, and an SSBC Tri-Power three-piston front brake kit arrests the mighty powertrain when it’s time to slow down.
Travis has a few tricks up his sleeve for the upcoming season’s show circuit. A stouter ATS Diesel transmission is on the docket, but curiously, he won’t be swapping in an oil-burning engine. “I’m trying to be different,” he says. “Everybody went diesel, and I like to keep it gas. I’m planning to add a supercharger to keep the Hemi hot.” Travis would also like to add some body modifications, and he’s hoping to update the wheels to keep the look fresh. 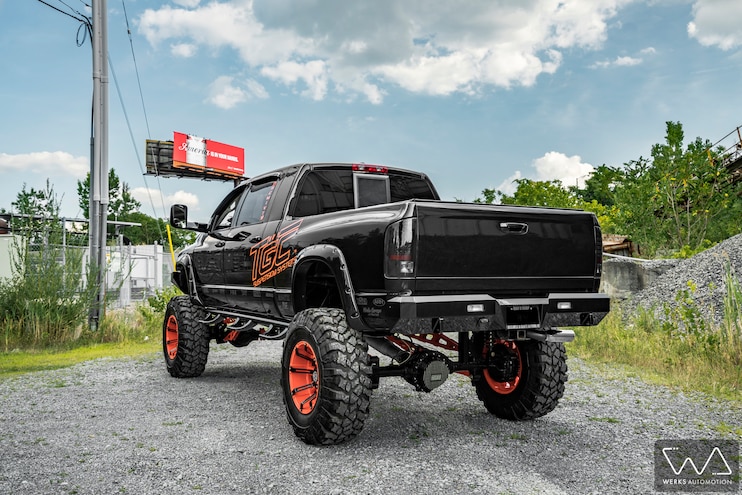 View Photo Gallery | 62 Photos
Photo 5/62   |   2008 Dodge Ram Road King Rear Daylight
As any married truck enthusiast can attest, the “other half” can make or break a vehicle build. Luckily, Travis’ wife Kristin is all in for the long road trips to truck shows and the sometimes-complex alterations the Ram endures. “My wife gets into it,” Travis says. “She even likes to see little things on the truck change here and there, just to keep it new and fresh.” Wherever Travis goes with the Mega Cab, it’s a sure bet Kristin and their two kids are riding along.
If he had to do it again, Travis says he wouldn't change a thing. Everything’s happened according to plan, more or less. However, he does caution other owners to plan for lots of extra time to allow for parts that don’t quite fit or packages that get delayed. And Travis advises anyone with a sponsorship to keep his or her word. “The truck’s sponsored, and the companies give me great deals to go out to shows and send them photos,” he says. But some people will just take those sweetheart deals from companies and never be heard from again, according to Travis, and that makes it difficult for others like him to build their dream trucks. 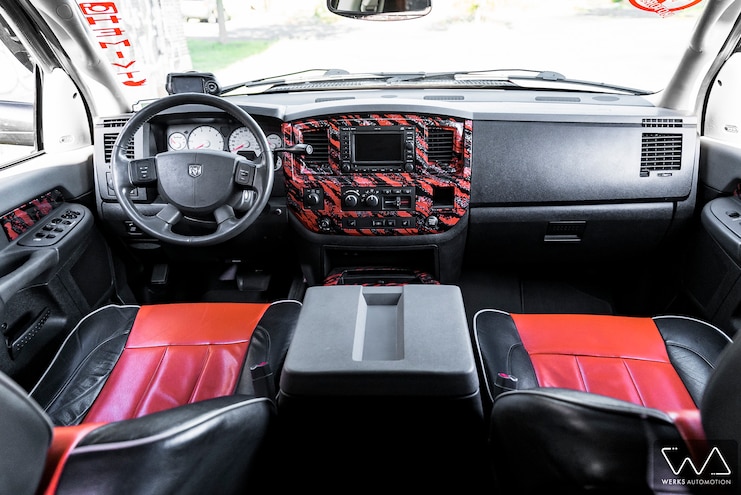 View Photo Gallery | 62 Photos
Photo 6/62   |   2008 Dodge Ram Road King Interior
Still, with a long list of suppliers and a band of friends and family giving him support, Travis isn’t slowing down with his ’08 Mega Cab. Expect to see this pickup on the road (with wife and kids in tow) for years to come, and if you happen to see him at a truck show near you, give him our regards. 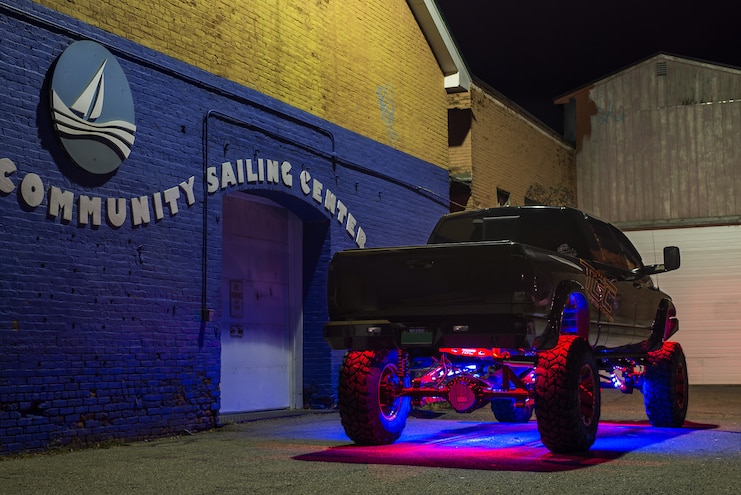