When someone sets out to build their version of a perfect truck, the process can be as simple as changing the paint color, or it can involve completely revamping a driveline, suspension, or exterior. Many times, a “perfect build” somehow incorporates all of this, which is exactly what we learned after talking to Chavis Fryer about the beefy-looking ’03 Chevrolet Silverado 2500HD you see here.
If Chavis’ name sounds familiar, it’s because he is one of the faces that regularly appears on the Discovery Channel TV show Diesel Brothers. He’s an engine guy and is well known in the Duramax world, so it makes sense that his personal truck is a General Motors product with the venerable 6.6L V-8 engine under the hood. However, powerplant aside, one of the neatest things about this truck is that instead of there being a typical Allison automatic transmission behind the engine, a factory-installed ZF S6-650 six-speed manual gearbox resides beneath the floor. Far from a stock rig, this is a dualie Chavis did right. 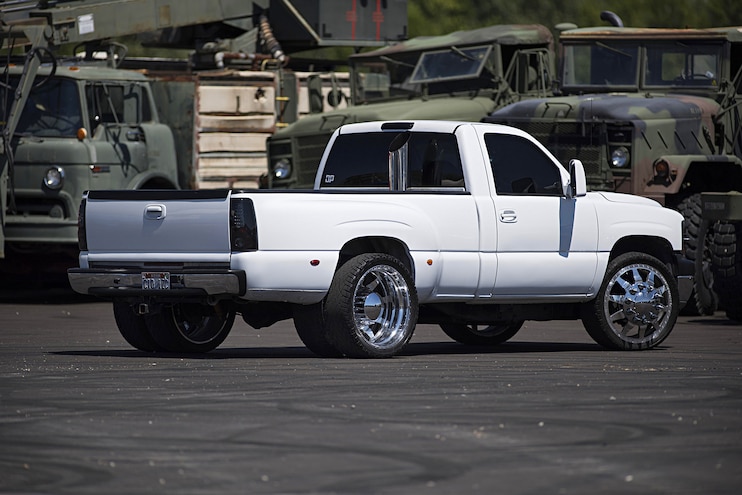 View Photo Gallery | 85 Photos
Photo 2/85   |   Chavis Fryer knew the look he was chasing with this truck, and we think he nailed it. Dropping the truck 3 inches in the front and 5 in the rear with a McGaughy’s Suspension Parts lowering kit and filling the wheelwells with low-profile tires gives this dualie a near-perfect stance.
“I have always loved standard-cab dualie trucks,” Chavis says. “Standard cab trucks are getting really hard to find, so when I got this one I knew how I wanted to build it, the look I wanted, and the fact that it was going to be a daily driver. I wasn’t necessarily hunting for a stick shift truck, but this truck has a six speed in it, so that was a bonus.”
Since Chavis is surrounded by crazy builds on a day-to-day basis, you may think he went over the top with this truck. In fact, he did just the opposite. With a plan in mind, Chavis began searching for the right truck to make his own. He ended up finding a single-rear-wheel ’03 Silverado 2500HD that had a Duramax LB7 and the stick-shift transmission he was looking for. It was offered for ’01-to-’07 model years in GM trucks, and the ’03 production run saw the highest take rate for the manual transmission in the entire time the ZF was available. Chavis’ truck was clearly destined to be a work truck, as its options were minimal. Outside of air-conditioning and four-wheel drive, the rig was basically a blank canvas.
Preferring the looks of the front fascia that came just before GM’s ’03 styling refresh, Chavis had a perfect ’01 Silverado nose and dualie bed laying around and swapped them for the rig’s original tin. As nothing about the frame or substructure of the truck had changed, this was a simple bolt-for-bolt swap. Only the savviest of GMT800 chassis lovers would ever even have an inkling this truck was anything but an ’01 model. 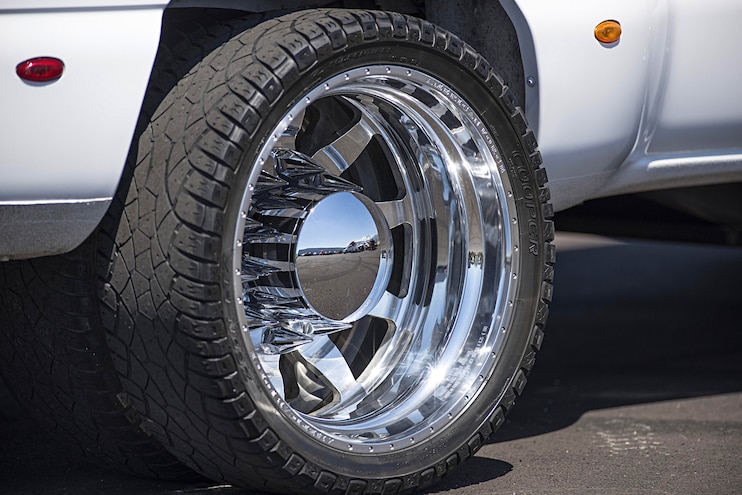 View Photo Gallery | 85 Photos
Photo 3/85   |   While a popular look these days is a lifted truck with short sidewall tires, Chavis went the other way, and the results are tough looking. The 24-inch American Force wheels fill up the opening, and the tires have a cool and aggressive tread pattern, completing the package.
Chavis then set out to adjust the factory stance. Being a four-wheel drive, the truck sat high from the factory and, like most GM trucks, had lots of space between the top of the tire and the wheelwell opening. While the plan was to put some aggressive rubber on the truck, the altitude situation needed to be correct and fast. To achieve the right stance, Chavis used a 3-inch/5-inch lowering kit from McGaughy’s Suspension Parts. This dropped the front 3 inches and the rear nearly 6 inches. With the truck now sitting properly, the move to finish the look was to ditch the factory wheels and tires for a set of 24-inch American Force Independence wheels and wrap them in short sidewall 295/35R24 Toyo Proxes tires. Short sidewalls on trucks are a popular trend, and they look especially good when a truck’s stance is aggressive, as it is in the case of this Silverado 2500HD.
With the looks and exterior of the build handled, Chavis concentrated on his favorite part of any build: the engine and driveline. Because this truck is a daily driver, the approach to boosting power and making the truck more fun to drive had to be executed with a reasonable conservative mind. This dualie is not designed to win dyno competitions or run single-digit lap times at the dragstrip; it is designed to get Chavis around and tow when it has to—without the constant care and attention a race truck requires. 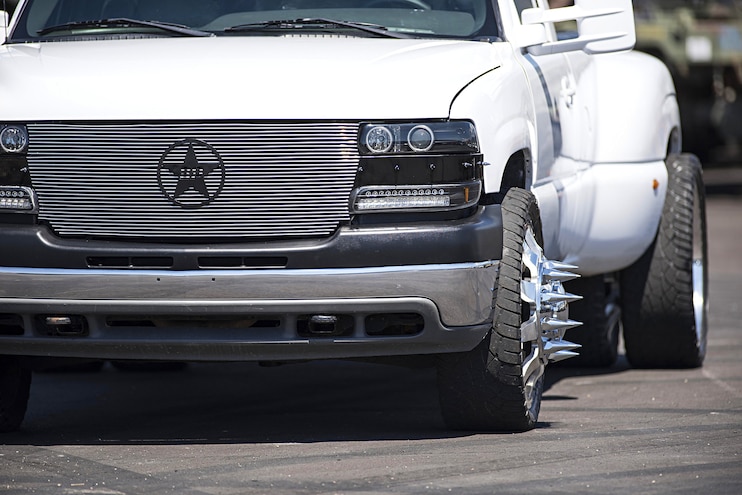 View Photo Gallery | 85 Photos
Photo 4/85   |   With the popularity of the Diesel Brothers television show, we’re guessing Chavis is recognized often in this truck. Even if there wasn’t a TV show, the rarity of a single-cab, stick-shift dualie would get attention!
“When I did this engine, I obviously wanted to make more power than stock, but I wanted to keep the engine in the safe zone for the bottom end,” Chavis says. “I’m not looking to have a 1,000hp daily driven truck. This is a solid and pretty mild combination that I drive every day of the week and have fun with. It is a strong piece, and it drives well to the shop and back every day. The South Bend Clutch street twin disc is a good clutch behind this engine.”
The Duramax LB7 remains largely stock internally. However, Chavis did add ARP cylinder-head studs to strengthen the clamping force on the top end of the engine in anticipation of the additional boost his turbocharger upgrades would bring. Gone is the factory IHI turbocharger and installed in its place is a compound setup using two BorgWarner turbos. An S364 and a billet S483 produce boost and eliminate the potential spooling problems a large single turbo would face with the high elevation in which this truck normally operates. Industrial Injection 30-percent-over injectors and an Industrial Injection 120-percent-over CP3 injection pump, along with a FASS platinum 260-gph lift pump, are responsible for the engine’s fueling. Chavis says the engine makes 600 hp, which hustles the rig down the road quite nicely. If you think that’s a short list of hot-rod parts, it is. The intercooler and intake manifold are stock, as are the rotating assembly, heads, and other hard parts. It would have been easy for this one to spiral out of control, but Chavis did not let it. 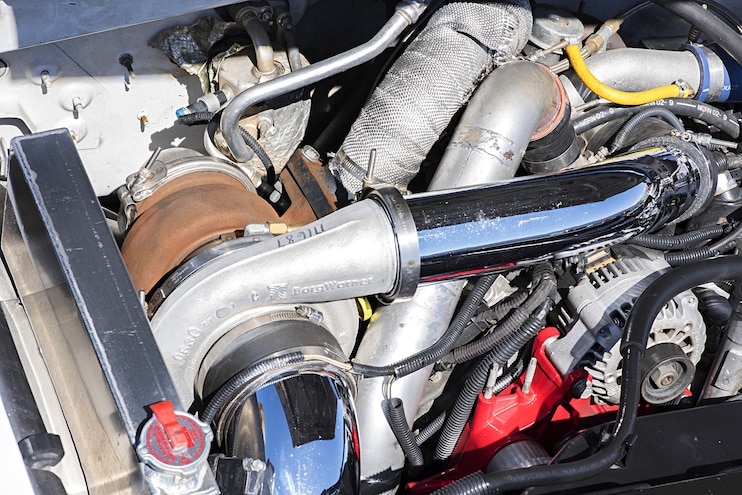 View Photo Gallery | 85 Photos
Photo 5/85   |   The 6.6L Duramax LB7 engine has a set of compound turbochargers highlighted by a BorgWarner S364 turbo over an S483. Chavis believes the engine, which is strengthened with ARP cylinder-head studs and has a keyed camshaft and crankshaft, makes in the neighborhood of 600 hp.
Some trucks are more than the sum of their parts. On paper, you wouldn’t necessarily think a white ’01 Chevrolet Silverado 2500HD dualie would be all that cool. But when you actually see it and recognize the hard work and thought behind it, the truck becomes more interesting by the second. After all, how many three-pedal, single-cab dualies have you seen with Duramax power lately? 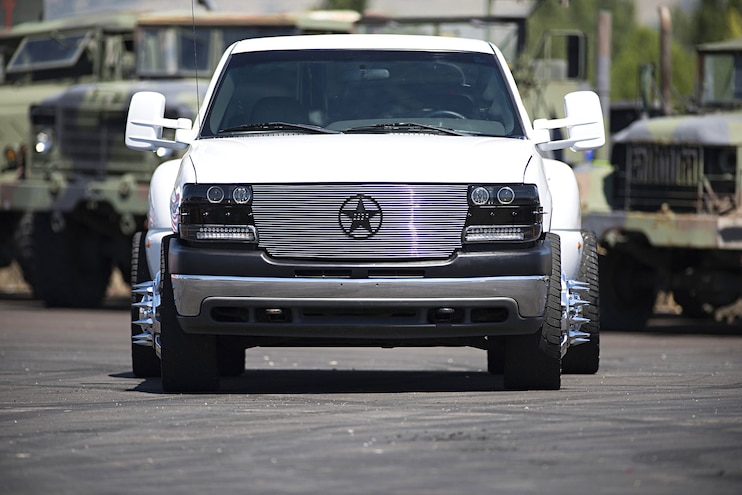 View Photo Gallery | 85 Photos
Photo 6/85   |   These big, 5-ton army trucks behind the shop may be larger than the dualie, but they are definitely not more powerful. Chavis claims his truck’s hopped-up Duramax makes about 600 hp with a set of sensible compound turbochargers. 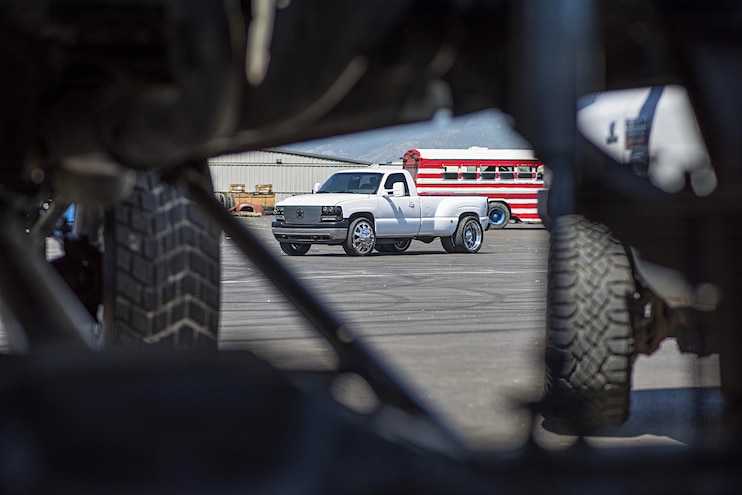 View Photo Gallery | 85 Photos
Photo 7/85   |   This former single-rear-wheel ranch rig’s appearance has come a long way from how it looked when new. Chavis added the ’01 Silverado 2500HD nose and did a bed conversion to get the dualie party started. 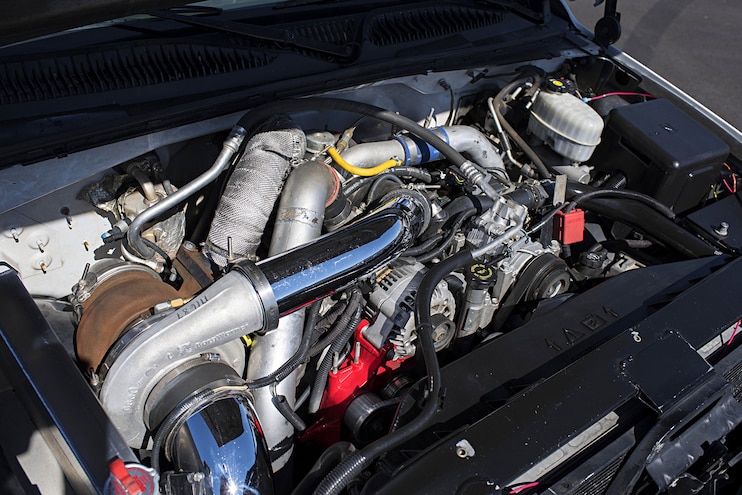 View Photo Gallery | 85 Photos
Photo 8/85   |   The basic and effective engine package may seem pretty tame for a guy who is around wild diesel trucks on a day-to-day basis. But remember, Chavis’ dualie is a daily driver. The man has an insane Duramax-powered race rig he uses for the crazy stuff. 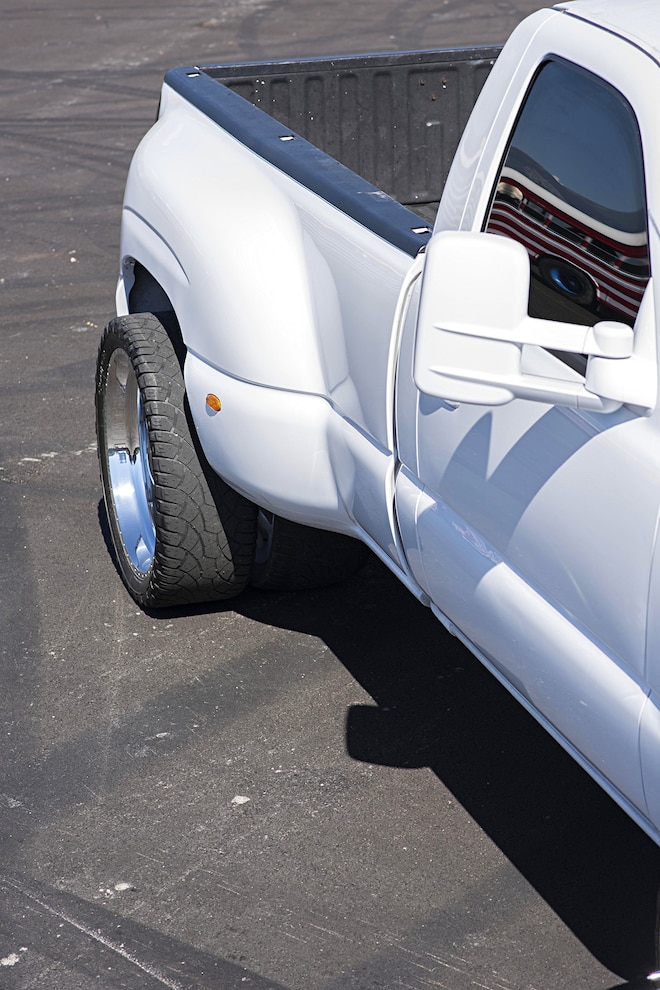 View Photo Gallery | 85 Photos
Photo 9/85   |   It is a rare sight these days to spot dualie fenders and only see one set of doors on the cab. Of course, for years, four-door trucks were the anomaly. The pendulum has swung the other way. The white paint and tinted windows offer a cool contrast. Chavis also had the mirrors and door handles painted the color of the body to match to the rest of the truck. 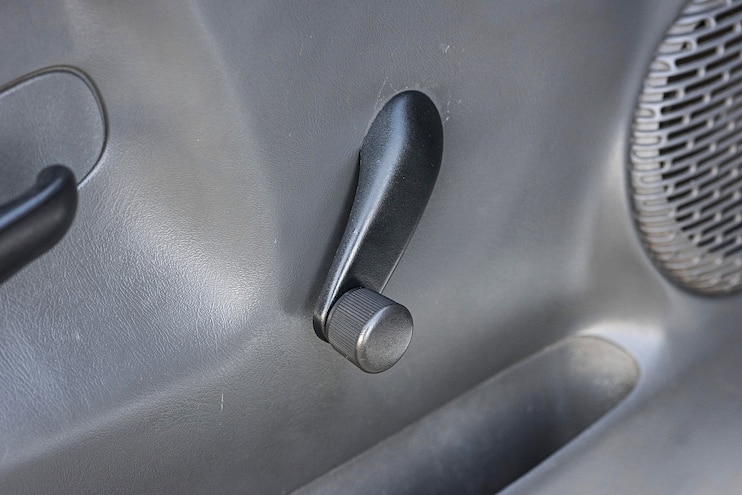 View Photo Gallery | 85 Photos
Photo 10/85   |   Speaking back to this truck’s ranching history, the crank windows are another throwback feature. Pickup trucks were the poster boys for manual windows for decades, but to see cranks in a modern truck is another rare sight! 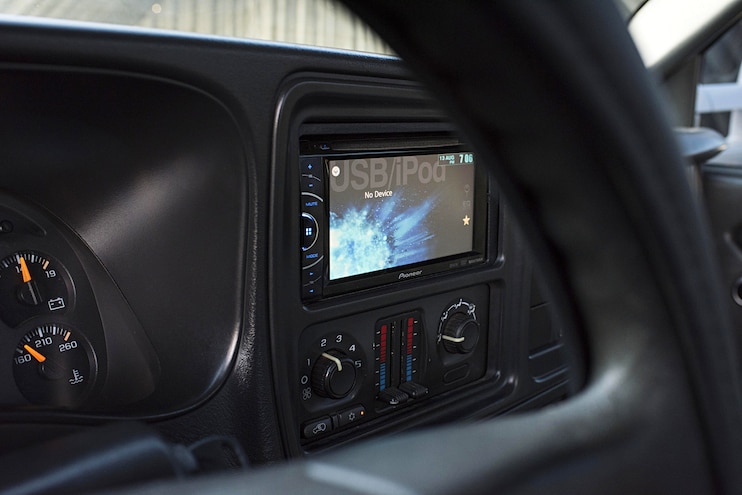 View Photo Gallery | 85 Photos
Photo 11/85   |   The only major deviation from the stock interior is this touch-screen Pioneer head unit. Note the heater controls and general lack of doodads around the cab. This was a low-option work truck when new. 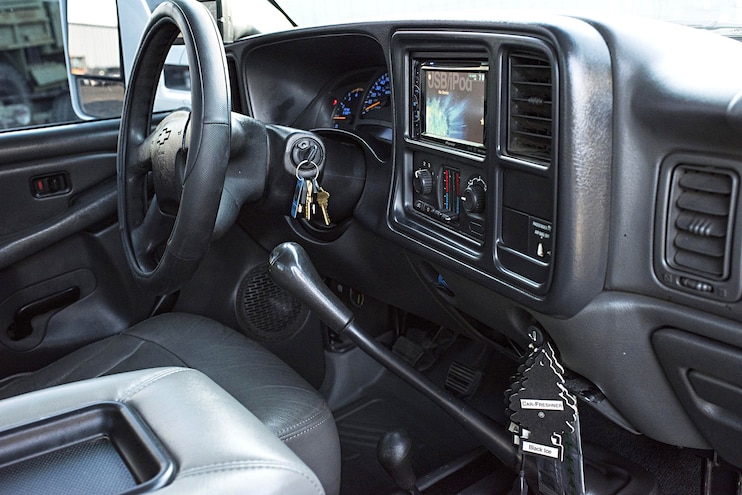 View Photo Gallery | 85 Photos
Photo 12/85   |   Do not adjust your eyes! Yes, there are two shift levers on the floor, and yes they were both put there at the factory. This truck was delivered with a ZF S6-650 six-speed manual transmission as original equipment. A South Bend dual-disc street clutch transfers the power to the rear axle. 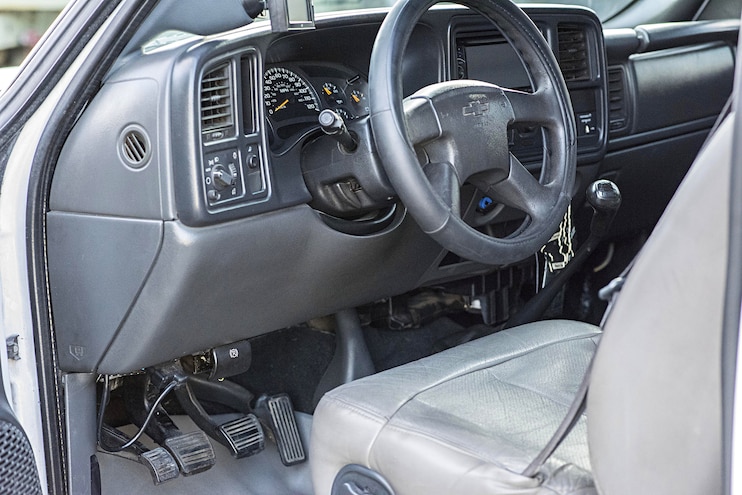 View Photo Gallery | 85 Photos
Photo 13/85   |   The three pedals and the six forward speeds really put this truck over the top. Fit and finish is great, the stance is cool, and at the end of the day, this has to be a fun rig to hop into for the cruise home from the shop.