Return of the Anti-Truck 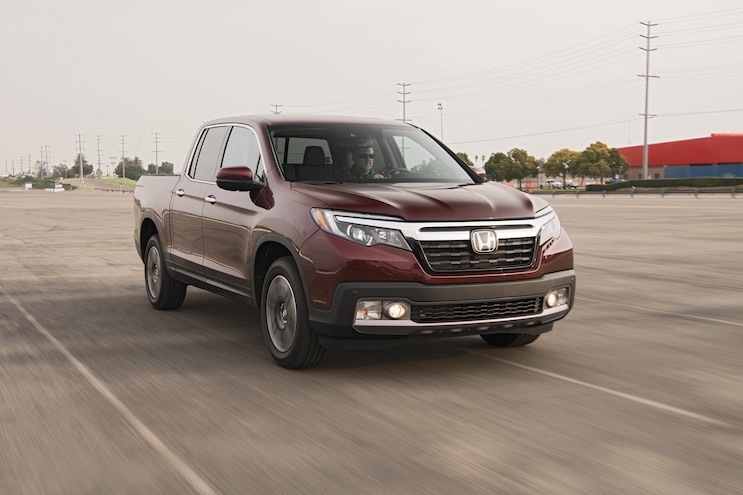 When Honda first introduced the Ridgeline in 2004 (as an ’05 model), it was met with much accolade and a bit of skepticism. It looked nothing like a traditional pickup, lacked a two-speed transfer case, and was built on the same unibody platform as the company’s Pilot SUV. While it was never really adopted by truck purists, the first-generation Ridgeline sold nearly 300,000 units in North America during its 11-year production run and was widely seen as one of Honda’s most profitable vehicles.
After a brief two-year hiatus, the Ridgeline made its return for ’17. This second generation is all new from the ground up. However, Honda made sure to retain many of the attributes that first-generation Ridgeline owners loved so much. Coming into our Pickup Truck of the Year test it was clear that the Ridgeline had an uphill battle to fight, mainly with some of our more hardened judges and their perception of what a “real truck” was. It didn’t take long, however, for each and every one of them to find something that they loved about Honda’s all-wheel drive unibody pickup. 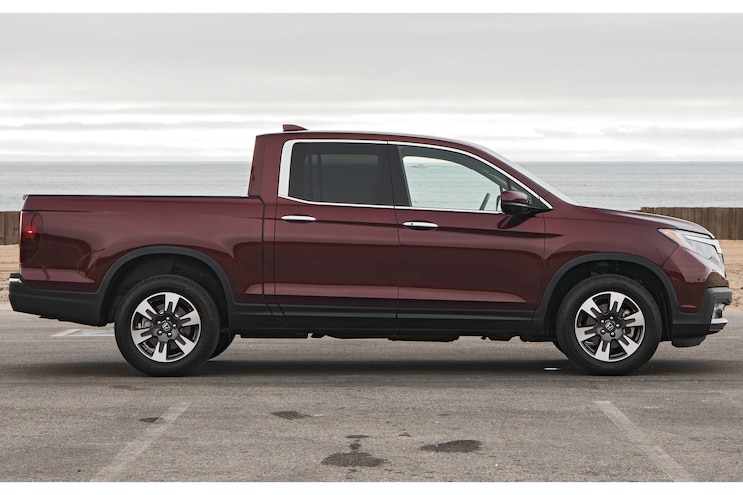 View Photo Gallery | 10 Photos
Photo 2/10   |   2017 Pickup Truck Of The Year Honda Ridgeline Side
When it came to ride comfort, the Ridgeline was second to none. The open road is where this beauty shines. Thanks to its unibody construction and independent rear suspension, the Ridgeline eats up highway miles with very little in the way of driver fatigue. Inside, our judges found the interior to be quite comfortable, with the only complaints surrounding the buttonless infotainment system. The rear seat was found by most to be quite spacious, thanks in part to the aforementioned unibody construction. Interestingly, the Ridgeline was equipped with one of the best sounding stereos of the group. However, not being allowed to activate Apple CarPlay while in gear was a bit irritating, and the Ridgeline was the only vehicle in our test with such a restriction. 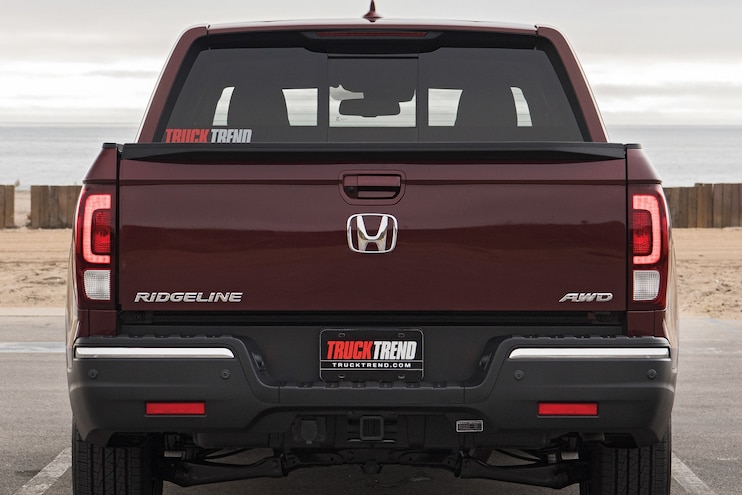 View Photo Gallery | 10 Photos
Photo 3/10   |   2017 Pickup Truck Of The Year Honda Ridgeline Rear
Exterior styling has been updated and refined for the second generation, including the removal of the first-generation’s signature sail panel in favor of a more traditional pickup look. Our judges were split on the Ridgeline’s exterior, with half the group loving the sleek aerodynamic look and the other half not caring for all of the carryover from Honda’s Pilot. This criticism isn’t unjustified, as the Ridgeline does share the bulk of its B-pillar forward with the Pilot. Around back, the Ridgeline’s bed still impresses with features carried over from the first-generation. The in-bed trunk provides storage space for anything that one doesn’t want in the cab, and it makes for an excellent cooler, holding more than 200 pounds of ice. The truck’s dual-action tailgate has the ability to open both traditionally and to swing to one side for easy loading no mater the situation. And when the party really gets going, the in-bed audio system is fantastic and a 110V outlet is provided to power most tailgating accessories. 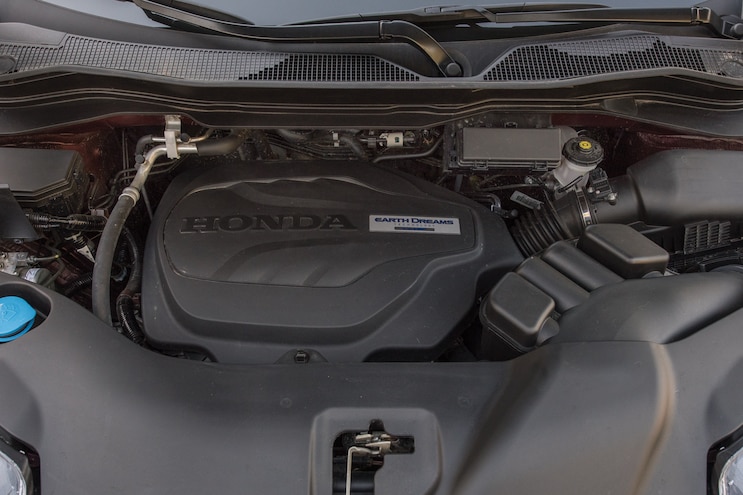 View Photo Gallery | 10 Photos
Photo 4/10   |   2017 Pickup Truck Of The Year Honda Ridgeline Engine
Under the hood lives Honda’s 3.5L EarthDreams V-6 engine, which cranks out 280 hp and 262 lb-ft of torque. Power is routed through a new six-speed automatic transmission and intelligent all-wheel-drive system. From a standstill the Ridgeline accelerates to 60 mph in just 7.44 seconds when unloaded, thanks in part to a first gear that is 22 percent shorter than in the previous generation. When loaded with payload or saddled with a trailer, the Ridgeline’s rear end squats heavily and rear tires gain an almost uncomfortable amount of negative camber. However, handling is never sacrificed and the Ridgeline won praise from all who drove it loaded down. With either full payload or a trailer that is admittedly larger (though well within the weight rating) than most Ridgeline owners will tow, our judges were impressed with how composed the truck remained. Directional stability was never compromised and the truck never felt lacking for power. 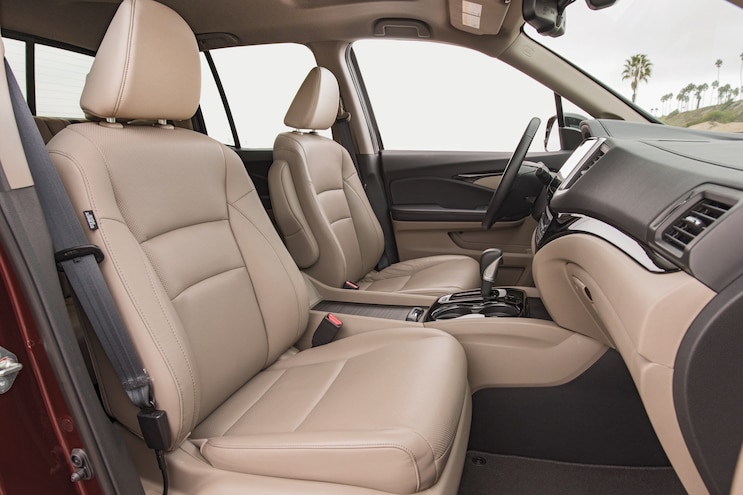 View Photo Gallery | 10 Photos
Photo 5/10   |   2017 Pickup Truck Of The Year Honda Ridgeline Interior
The Ridgeline felt just as at home off-road as it did on, so long as it was kept within its abilities. More akin to a rally car than a rockcrawler, the Ridgeline won fans when blasting down graded washboard roads or the flat dry lakebed. With the terrain-select system in sand mode, the Ridgeline was easy to fling around, gripping tightly to the earth thanks to its intelligent torque vectoring ability. One of our more skilled off-road judges even piloted it up a steep rocky trial with no wheel spin at all. Where Ridgeline fell off was in whoops, rocks, and ruts. Its low ground clearance and lack of any sort of skidplating kept it relegated to the flat stuff. In reality, the Ridgeline is built to handle sand, mud, and snow with ease, which it does—it’s not a rockcrawler or prerunner and was never advertised to be.
The new ’17 Ridgeline is a fantastic all-around pickup. It’s loaded with technology, great on the highway, and can haul just the right amount of toys to wherever you choose to recreate. During our week of testing, it converted more than one staffer and shined a light on just how capable unibody construction can be.
WE LIKE: Great tailgater with the in-bed trunk, dual-action tailgate, and in-bed audio system; excellent real-world fuel economy; outstanding highway ride and fuel economy
WE DON’T LIKE: Minivan-like front styling; buttonless infotainment system; non-defeatable traction control system; no damper on the tailgate 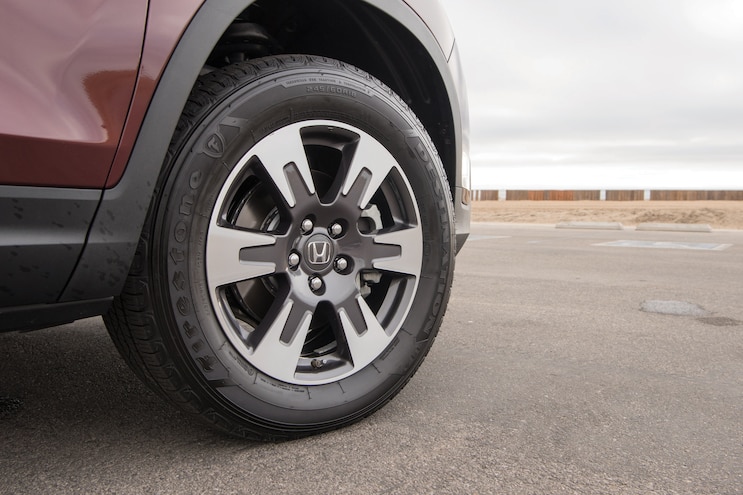