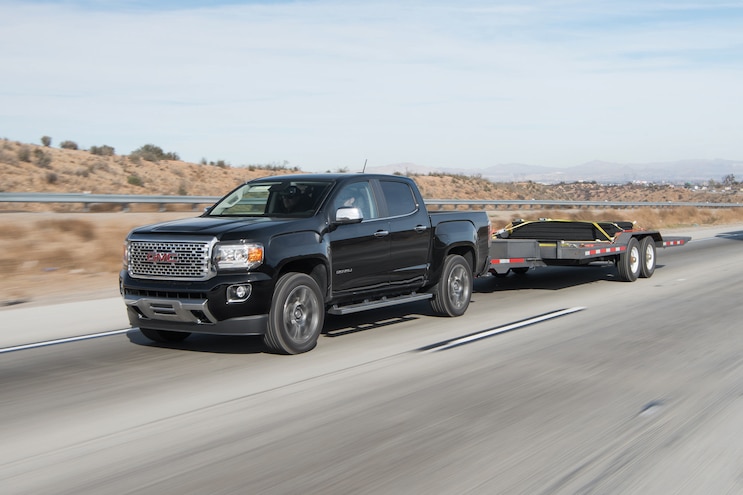 After many manufactures withdrew from the market several years ago, the midsize truck arena has experienced a revival of sorts during the last couple of years. General Motors was the first to come back to the game with the introduction of the second-generation Canyon/Colorado duo for the ’15 model year, which was met with impressively strong sales. Rivals have taken notice, with Toyota launching an all-new Tacoma for ’16, Jeep announcing a Wrangler-based pickup for ’19, and Ford proclaiming the return of the Ranger as a ’19 model as well. 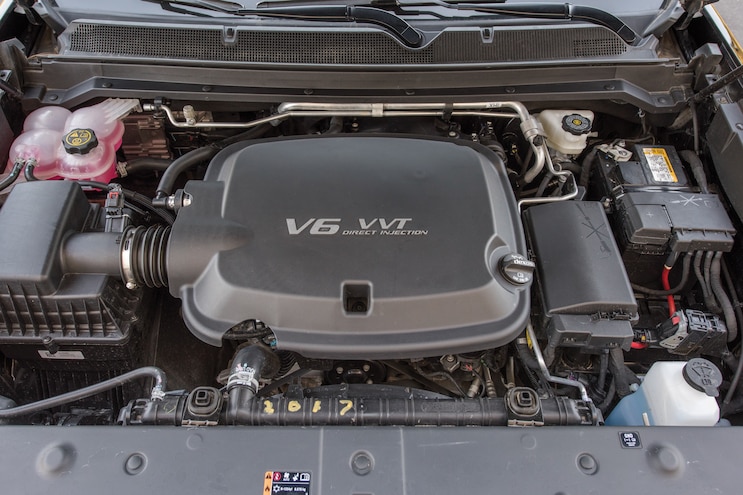 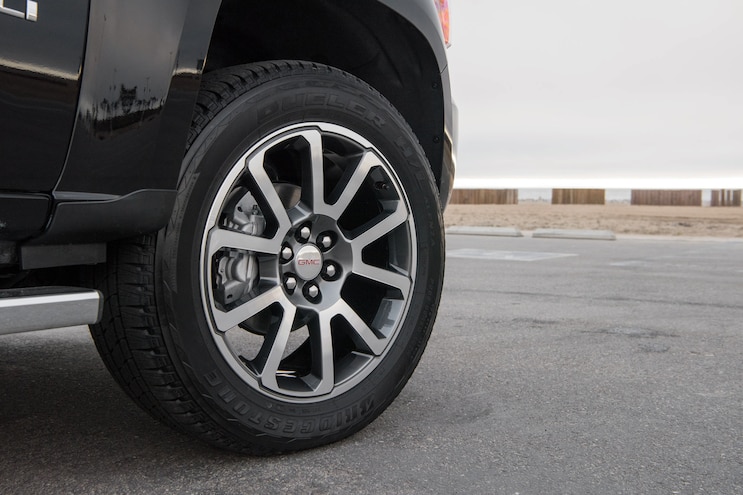 View Photo Gallery | 10 Photos
Photo 3/10   |   2017 Pickup Truck Of The Year Gmc Canyon Denali Wheel
When GMC handed us the keys to a top-spec four-wheel-drive Canyon Denali for our 2017 competition, we were excited to see if the General had addressed some of the complaints we had from our inaugural Pickup Truck of the Year competition. We will admit that some of our excitement was dashed we saw the sticker price at $43,050. While that is in line with the Tacoma and Ridgeline in test, we still find it a hard pill to swallow for a midsize truck.
One of our chief complaints about the Canyon we brought to our 2015 competition was with the powertrain. The ’17 model works to fix that with a new engine shared with the Cadillac XT5, which features cylinder deactivation and a bump in horsepower and torque to 308 and 275 lb-ft, respectively. Combined with a shorter First gear and wider ratio spread of the eight-speed transmission, we found the powertrain to be more refined in the city and on the highway. Drivers didn’t say much about the combo during our test, which is a great thing in our book. Fuel economy was also commendable at an observed 18.64 mpg average during our week of testing. 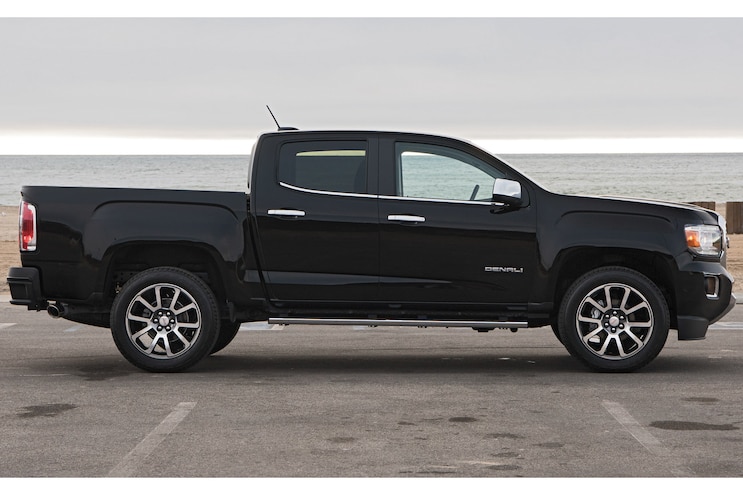 View Photo Gallery | 10 Photos
Photo 4/10   |   2017 Pickup Truck Of The Year Gmc Canyon Denali Side
The revised shift logic of the transmission paid dividends when towing. Where the ’15 model was constantly searching for higher gear (which was particularly annoying when passing or ascending a grade), the eight-speed competently keep the engine in its power band without hunting for gears. In conjunction the Tow Mode toggle in the lower console, this made hauling a much more enjoyable experience. We did wish there was more torque from the car-based engine and that engine braking was more effective at maintaining speed downhill. Thankfully, there was available trailer brake controller to help bring everything under control.
Inside, staff enjoyed the remarkably quiet and comfortable ride. The seats were mixed bag for some, but the cabin’s ergonomics were appreciated. We particularly enjoyed the powerful cooled front seats and the available 4G LTE hotspot, which was a boon to staying connected while away from the office. 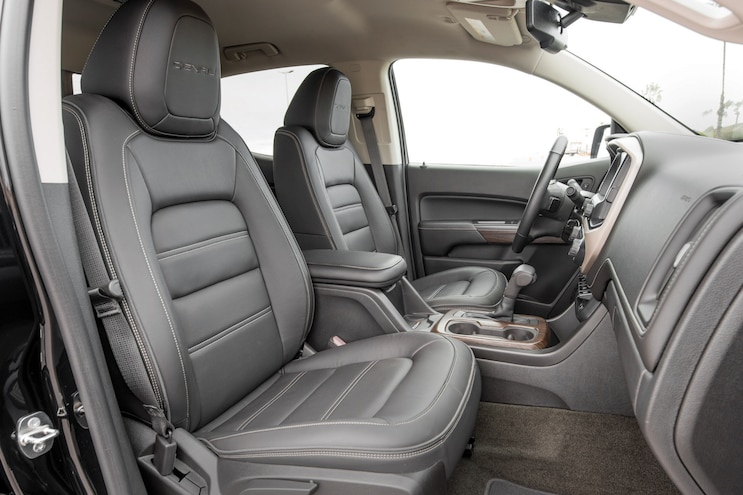 View Photo Gallery | 10 Photos
Photo 5/10   |   2017 Pickup Truck Of The Year Gmc Canyon Denali Interior
However, the Canyon’s weaknesses became more apparent once you wandered off paved roads. Scoring worst in the group, the truck’s off-road chops were hampered by the low-hanging front air dam, large side steps, average ground clearance, and short-sidewall tires. While the air dam can be taken off—by removing the whole front fascia, mind you—we tested the trucks as equipped, and as a result, the amount of caution we had to excise off-road with the Canyon sucked most of the fun out of it. 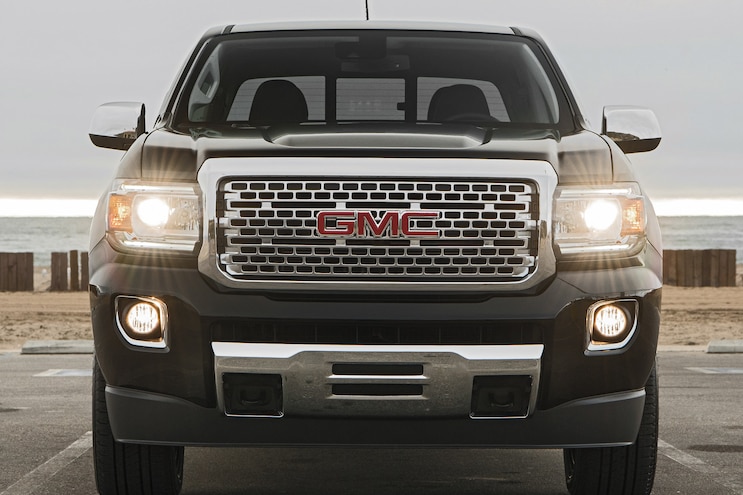 View Photo Gallery | 10 Photos
Photo 6/10   |   2017 Pickup Truck Of The Year Gmc Canyon Denali Front
So is the ’17 GMC Canyon Denali improved? Most definitely. However, while there was a lot to enjoy about this truck, it was hard not to wonder what you could get in a fullsize truck for the same amount of coin. On the other hand, it’s also hard to argue against the refined and functional package the midsize Canyon delivers compared to its rivals, which will undoubtedly be an easy justification for many buyers.
WE LIKE: Handsome styling, competent powertrain, feature-rich infotainment
WE DON’T LIKE: Aero and styling enhancements that hamper off-road performance, lack of low-end torque 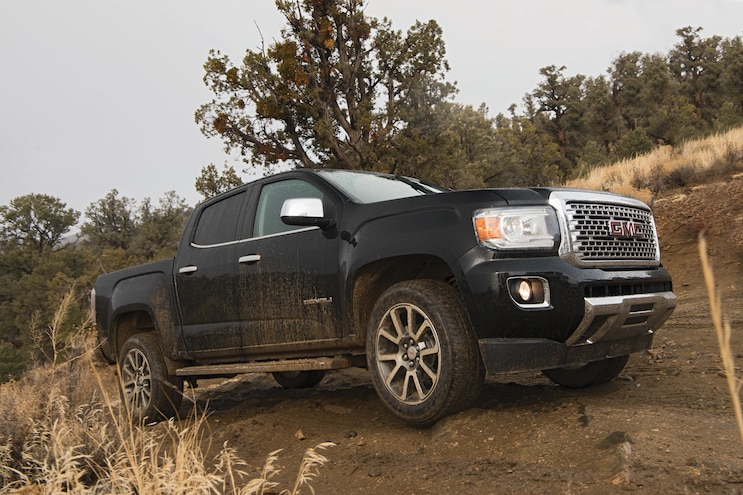 - OF
By Lee Lovell
4 Articles