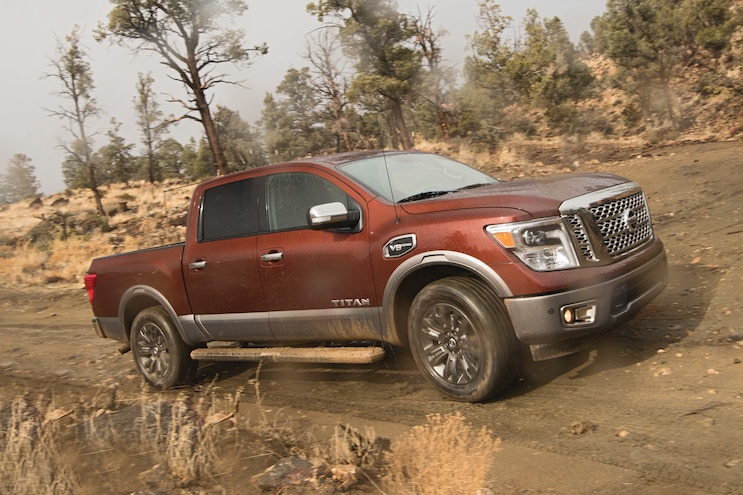 It seems that each year it gets increasingly difficult to be a judge on our Pickup Truck of the Year test. Yes, it’s a long week, filled with early mornings, late nights, manual labor, and terrible gas station food. However, the largest stressor is having the burden of judging such a diverse and deserving field of trucks. Manufacturers have really stepped up their game in the last decade and there wasn’t a bad truck in the test. All were deserving of the top honor in some way or another. At the end of the week, each of our judges had an idea of which vehicle they thought was going to top the rest, but it wasn’t until the last score was tabulated that we knew to whom the trophy would go.
With all of the scoring finalized it was the ’17 Nissan Titan that barely edged out the competition to take home the coveted Billet Piston trophy and the honor of being call our 2017 Pickup Truck of the Year.

(Mostly) New From The Ground Up 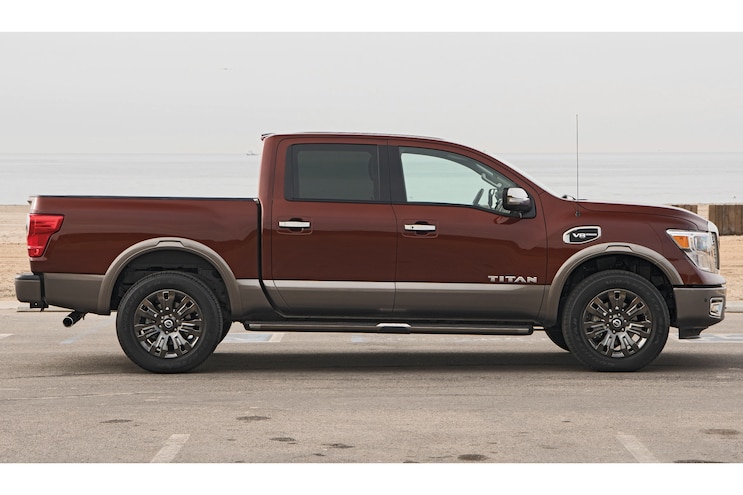 View Photo Gallery | 14 Photos
Photo 2/14   |   2017 Pickup Truck Of The Year Winner Nissan Titan Side
If the Nissan Titan feels familiar, that’s because it should. The first-generation Titan ended its decade-long production run with the ’15 model year, while the second-generation was introduced for ’17, leaving a one-year gap. However, Nissan launched the Titan XD for ’16, and while it’s a very different truck, it shares a lot of styling with the all-new Titan.
Chassis-wise, not a single bolt is shared between the Titan and Titan XD. The Titan XD also has a unique 6 1/2-foot bed length on crew cab models, and the front clip is slightly different to allow room for the XD’s Cummins turbodiesel V-8. The Titan and Titan XD do share a common cab and interior, and each utilizes the company’s 5.6L Endurance V-8 engine and Jatco seven-speed automatic transmission (a base-model V-6 is rumored for the base Titan in the future, and the XD offers an optional diesel). So while the Titan is new for ’17, it’s not surprising that people already find it familiar.

Sharing a cab with the Titan XD meant that this wasn’t our first introduction. Optioned in Platinum Reserve trim, our judges were almost universally impressed with the level of comfort and refinement that was offered. Nissan’s Zero Gravity seats, combined with the Platinum Reserve’s “quilted” leather, offered up one of the nicest seating surfaces in the test. The color scheme was classy, and even the faux wood trim was seen as tasteful, though we would really like to see it become real wood in future models. Thanks in part to a column-mounted shift lever, storage in the center console is gargantuan, easily swallowing whatever is tossed its way. If we had to find a complaint, it’s the slightly undersized cup holders, which have trouble with anything larger than a 20-ounce bottle. And in a world of 8-inch or larger infotainment and driver information center screens, the Titan also comes up short. 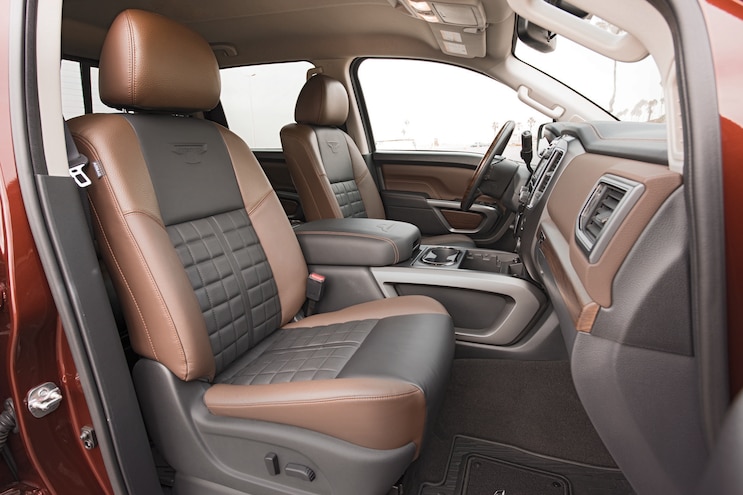 View Photo Gallery | 14 Photos
Photo 3/14   |   2017 Pickup Truck Of The Year Winner Nissan Titan Interior
Thanks in part to the use of laminated windshield glass, extensive sound deadening, and upgraded door seals, the Titan had the quietest interior out of all of our testers. Nissan’s acoustical engineers deserve credit for creating the tranquil cabin but still allowing you to hear the deep V-8 rumble from under the hood. And although it’s not segment-best, rear seat comfort doesn’t disappoint, and the storage options hidden beneath add a level of utility that’s hard to match.

The Titan’s styling can easily be described as polarizing. People either love it or hate it, and the same went for the judges on our test. One thing that was heard quite frequently, however, was the comment that the styling works better on the smaller 1/2-ton Titan than the larger XD. Most angles have grown on us and are—dare we say—downright classy. However, there are still a few elements that the group couldn’t decide if they loved or hated, so the jury is still out. When the numbers came in, Titan scored third in exterior styling, behind only the Ford F-150 Raptor and Super Duty, so whether they would admit it or not, our judges gave Titan a nod of approval. 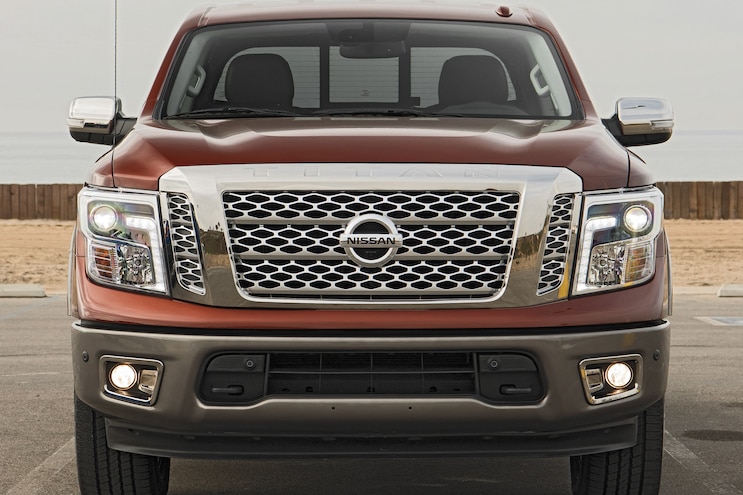 We can bench race about specs and talk about styling until the proverbial cows come home, but it’s once you get behind the wheel of the Titan that all things become clear. Nestled under the hood is Nissan’s 5.6L Endurance V-8. This engine, the American-made VK56VD, utilizes direct injection and Nissan’s variable valve timing and lift system, which they call VVEL, to produce 390 hp and 394 lb-ft of torque on regular unleaded gasoline. Mated to a new seven-speed automatic transmission, the Titan never feels underpowered. Thanks to its low 4.886:1 first gear ratio, the Titan gets off the line quickly, which also allows for a relatively high axle ratio of 2.937:1 for great cruising fuel economy. In our testing the Titan hit 0-60 mph in just 7.33 seconds, slower in this test than only the 450hp Raptor. 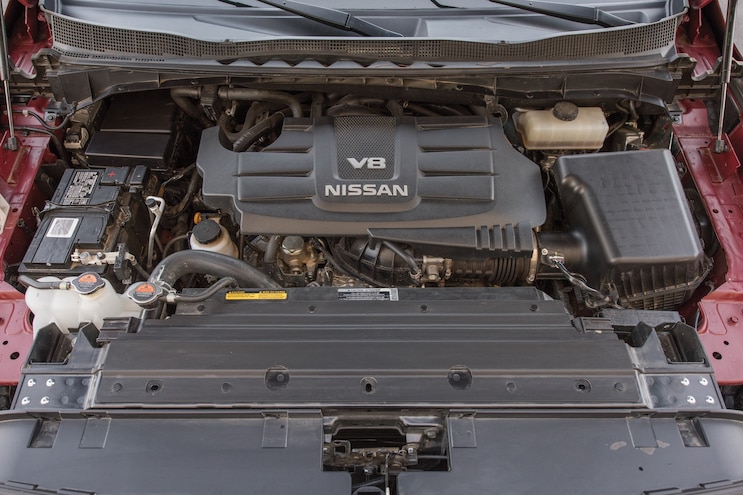 View Photo Gallery | 14 Photos
Photo 5/14   |   2017 Pickup Truck Of The Year Winner Nissan Titan Engine
The Titan’s highway ride was impressive. Thanks to the combination of Bilstein shocks, a quiet cab, and comfortable seating, the Titan was a favorite of our judges for the long highway slogs. Heated and cooled seats seem to be the standard these days, and while the Titan’s heaters worked extremely well, we found the cooling function a bit lacking. And while we’re on the subject, our judges preferred the momentary switches found in other competitors to Nissan’s small rotary control knob for the seat heating and cooling. It’s a small grumble, but one nonetheless.
One other often-heard criticism was about the Titan’s heavy steering. At slow speeds, our reviewers noted the increased effort required to pilot the Titan. However, the group also decided that the issue was less a result of Nissan choosing to use a hydraulically assisted rack-and-pinion steering system and more the result of comparing the Titan to other pickups on the test that utilize a much lighter effort electronically assisted steering system. For its part, the Titan’s stiff helm was appreciated for its high-speed stability and decent road feel.
When tasked with doing “truck stuff” the Titan really shined. Loaded down with 100 percent of its rated payload, 1,500 pounds, the Titan checked in with the second-quickest 0-60 mph time, 1/4-mile time, and 1/4-mile speed. The Raptor, which had more power and a far lower payload rating, was the only vehicle that outstripped the Titan in laden acceleration. Braking was another area where the Titan continually impressed, and in instrumented testing, the Titan stopped in the shortest distance with full payload, and second shortest unloaded (bested only by Ridgeline.) Titan had little in the way of discernable degradation of performance when weighted down, and even rear end sag was minimal. The same couldn’t be said for other pickups in the group.
Saddled with our 20-foot utility trailer loaded down to 6,845 pounds (75 percent of the Titan’s rated 9,230-pound capability) the Titan felt right at home. Judges who had never towed a load of this size commented on the ease with which the Titan handled the task. Hauling up and down the grade the Titan never felt underpowered, always kept its composure, and instilled confidence in everyone that drove it. The engine and transmission work seamlessly together to select the proper gear for the situation, allowing for easy passing and merging along with controlled a downgrade decent. The integrated trailer brake controller added another level of confidence above and beyond. As an added bonus, the engine’s fantastic exhaust note made each assessor grin from ear to ear as the truck burbled along. It was constantly noted how well the engine sounded under load, without having a horrid drone to go along with it. 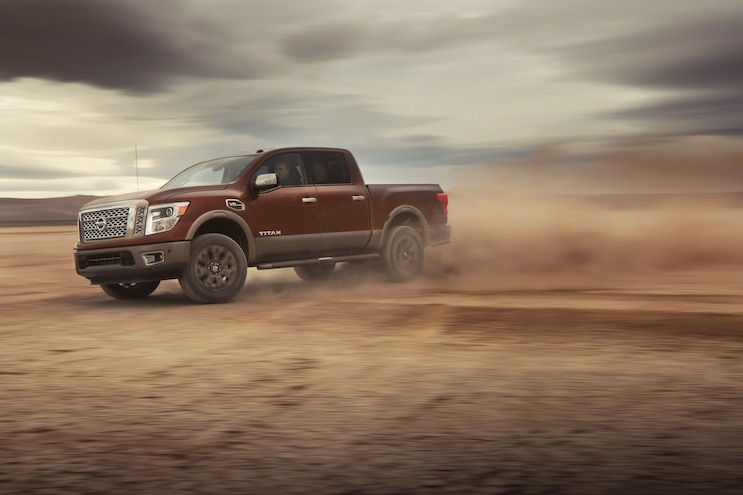 View Photo Gallery | 14 Photos
Photo 6/14   |   2017 Pickup Truck Of The Year Winner Nissan Titan
While the Titan Platinum Reserve is more at home cruising down the highway, it is competent when the road ends as well. Bilstein monotube shocks help to keep the ride controlled, and a limited-slip rear differential and competent traction control help to keep the whole operation moving forward. We wish that the locking rear differential that’s found on Pro-4X models would be made available on all Titans as well, but that’s just our wishful thinking. The 20-inch wheels and street-oriented tires didn’t help much in the loose stuff, so if heading off-road is your prerogative, both of these should be changed for trail-ready hoops. No matter the challenge we threw at the Titan—be it sand, rocks, hills, or rutted trails—the Titan made it through with no drama. It may not have been the most competent or composed off-roader in our test, but it didn’t disappoint either.

Throughout the course of our weeklong test, the ’17 Nissan Titan continually impressed all that encountered it. If one were to ask at the beginning of the week which pickup would ultimately take home the trophy, the unassuming Titan likely wouldn’t have been the choice. However, as the days and miles rolled on, the Titan started to reveal all that it had to offer, it became abundantly clear that what Nissan had created was not only an excellent pickup but also a formidable contender. 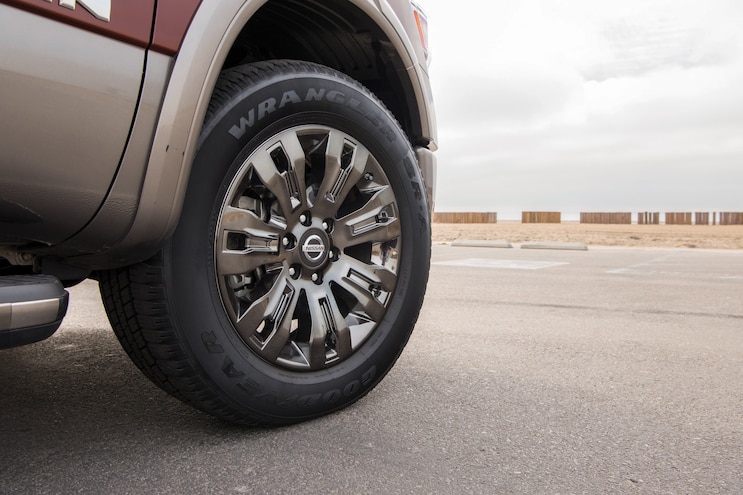 View Photo Gallery | 14 Photos
Photo 7/14   |   2017 Pickup Truck Of The Year Winner Nissan Titan Wheel
The Titan had the right mix of elegant exterior styling, interior comfort, advanced technology, and on- and off-road performance. Added to these attributes was a reasonable as-tested price compared to other fullsize trucks and segment-best 5-year/100,000-mile warranty, which make the Titan a reasonable value too. Only one truck could claim the title of 2017 Pickup Truck of the Year, and we’re excited to give that distinction to the all-new Nissan Titan.
WE LIKE: Powerful, great-sounding V-8 engine, comfortable ride, Zero Gravity seats, solid towing performance, good track numbers, best-in-test warranty, all-around capability in most situations, excellent value
WE DON’T LIKE: Undersized touchscreen display, seat heating/cooling knobs, small cupholders, love-hate styling, and “where’s the genuine wood trim?”