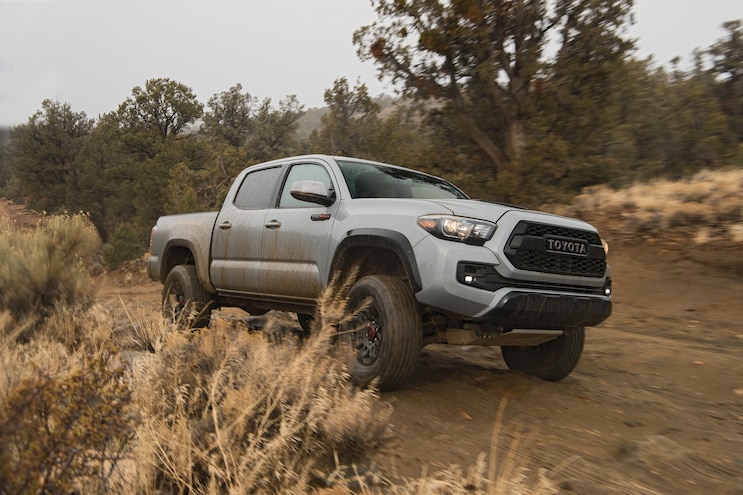 Following on the successful launch of the new-for-’16 Toyota Tacoma, the company gave its hotselling midsize pickup another variant for ’17. Returning after a one-year hiatus, the TRD Pro looks meaner than ever, ready to bring the fight to other midsize pickups and even bona-fide off-roaders like the Jeep Wrangler and Ford F-150 Raptor. 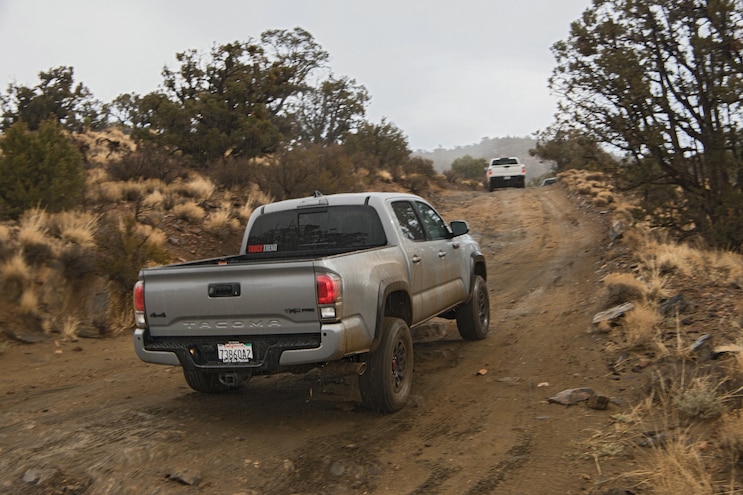 View Photo Gallery | 10 Photos
Photo 2/10   |   2017 Pickup Truck Of The Year Toyota Tacoma Trd Pro
Turning a regular Tacoma Double Cab into a TRD Pro requires a few things. Internal-bypass shocks by Fox Racing take up residence on the front and rear axles, with the fronts using the supplier’s Internal Floating Piston technology and the rears sporting piggyback reservoirs. TRD-tuned Eibach front coils provide an inch of lift, while the rear axle is suspended by the progressive-rate leaf springs from the Tacoma TRD Off-Road. Toyota engineers manipulated the wheels’ backspacing to provide a slightly wider track and more muscular stance, improving appearance and off-road stability.
The standard engine on every Tacoma TRD Pro is a 3.5L V-6 featuring the company’s direct- and port-injection system, designed to optimize both efficiency and emissions. Our tester was optioned with the six-speed automatic, a move that also added Crawl Control and Multi-Terrain Select to the Pro. The standard transmission is a six-speed manual that gets by without the off-road electronics. 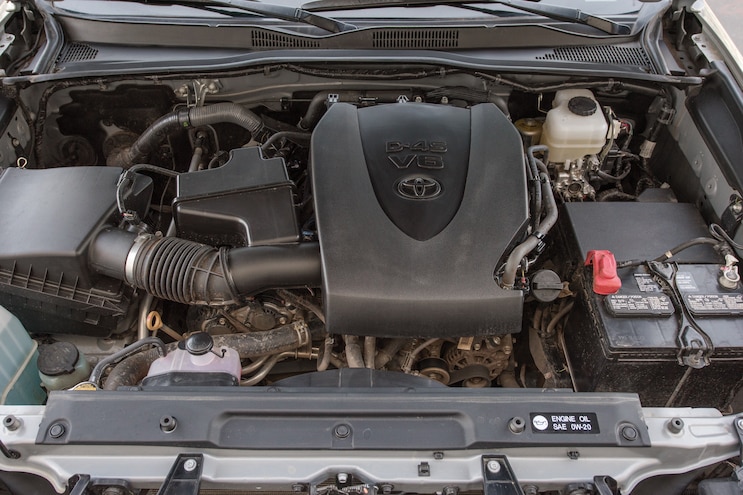 View Photo Gallery | 10 Photos
Photo 3/10   |   2017 Pickup Truck Of The Year Toyota Tacoma Trd Pro Engine
Unfortunately, our first impressions of the TRD Pro were not positive. As on the GMC Canyon and Chevrolet Colorado, the V-6 engine lacks low-end torque, meaning we had to rev the Tacoma hard if we wanted forward motion. Hampering that desire for revs was an overeager transmission that shifted to the highest gear as soon as possible.
Furthermore, the gearbox was reticent to downshift unless we matted the throttle, at which point it would give us a severe kickdown that left the engine screaming. If the gearbox were more willing to hold gears or perform earlier downshifts, it would be a much more composed pickup at freeway speeds. The driver seat’s lack of thigh support and limited headroom made for an unpleasant truck on long drives, compounded by the off-road suspension’s busy motions over broken pavement.
However, only a portion of our time was spent on-road, and once the highways turned to byways, the TRD Pro became a much happier camper. Two-lane roads were fun thanks to the Taco’s nippy handling and heavy, responsive steering. And even further off the beaten path, the Fox shock package seemed to improve the more punishment we offered. Indeed, a 60-mph blast across the bumpy desert smoothed out all of the Tacoma’s insecurities and deficiencies, revealing a truck that just wants to go out and play. That it kept pace with the much more expensive Raptor at high speeds is a testament to its off-road prowess. 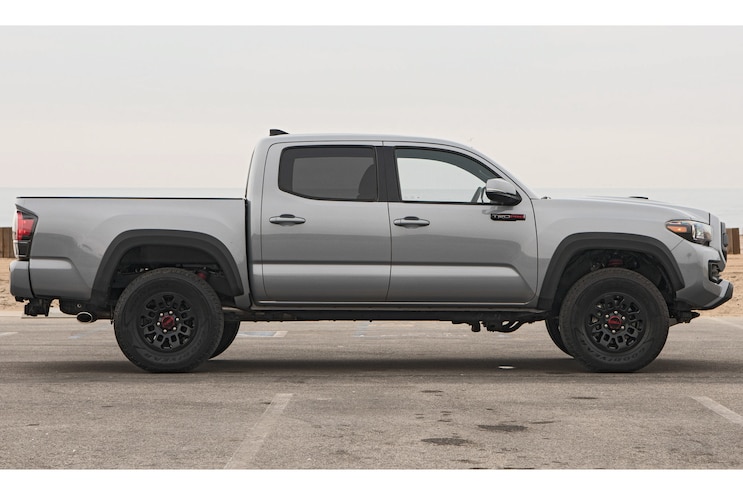 View Photo Gallery | 10 Photos
Photo 4/10   |   2017 Pickup Truck Of The Year Toyota Tacoma Trd Pro Side
Adding to its fun-loving attitude was an appearance package that looked appropriately muscular for its size, like a scrappy street fighter rather than a hulking heavyweight. The new-to-Tacoma Cement paint color was fabulously drab, a nice departure from the retina-searing hues most manufacturers apply to their more extreme models. We received a few comments at gas stations complimenting the Tacoma’s battleship-grey paint. Inside, black leather with red accents give the attractive cockpit a serious feel. And one year on, we still love the Tacoma’s imaginative, modern dash design. 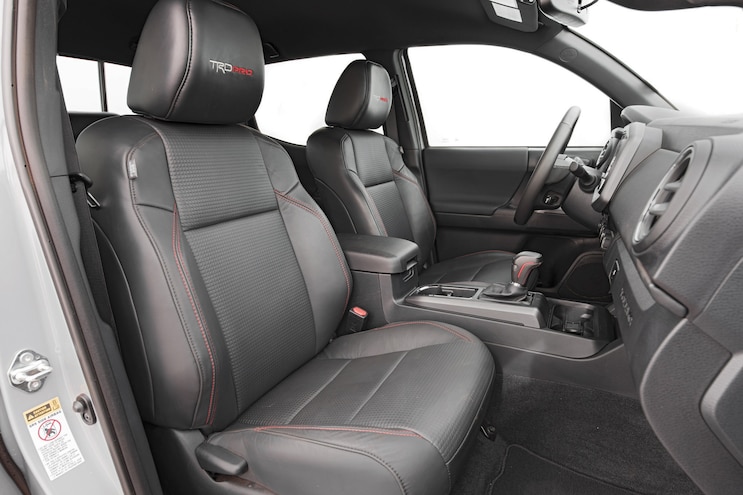 View Photo Gallery | 10 Photos
Photo 5/10   |   2017 Pickup Truck Of The Year Toyota Tacoma Trd Pro Interior
With a towing capacity that eclipses the Honda Ridgeline and, surprisingly, the mighty Ford F-150 Raptor, the second iteration of the TRD Pro offers a significant amount more utility than its predecessor. Additionally, the loaded-bed axle sag that plagued the ’15 Tacoma TRD Pro in our testing two years ago has been banished, along with a good amount of the negative handling characteristics we found back then. Indeed, the Tacoma is much more secure with a load than it’s ever been, even with the additional body roll that comes from a lifted off-road suspension.
Functionally speaking, the Tacoma’s composite-molded bed and wide, square walls made loading easy, and a built-in 110V outlet in the bed should facilitate the late-night desert parties this truck (and its marketing materials) would suggest. It lacks the in-bed storage solutions of the Honda Ridgeline, but the bed’s reconfigurable tie-downs and cleats aid in securing cargo.
But overall, we fear we may be damning the Tacoma TRD Pro with faint praise when we say Toyota devotees will love it. It maintains the company’s reputation for off-road fun and durability, and its unique styling is appropriately sporty and subdued. However, it is hamstrung by compromised on-road refinement and driver comfort, and the powertrain needs more low-end torque, better transmission programming, or both. The TRD Pro is a very fun truck, but it’s outclassed in this crowd of more well-rounded competitors. 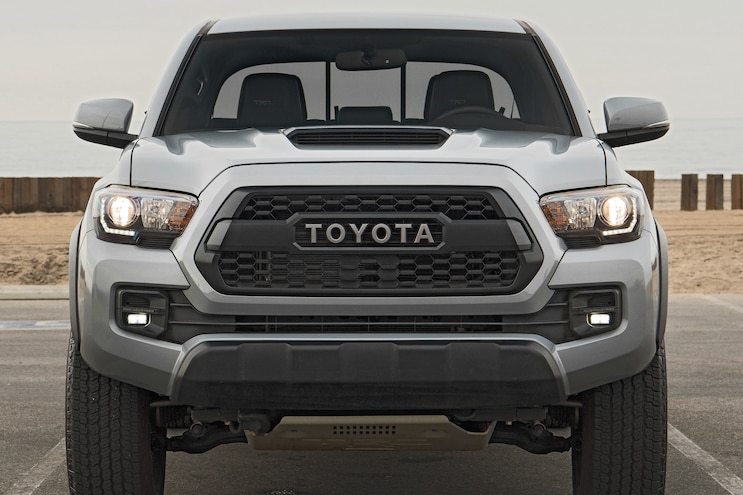