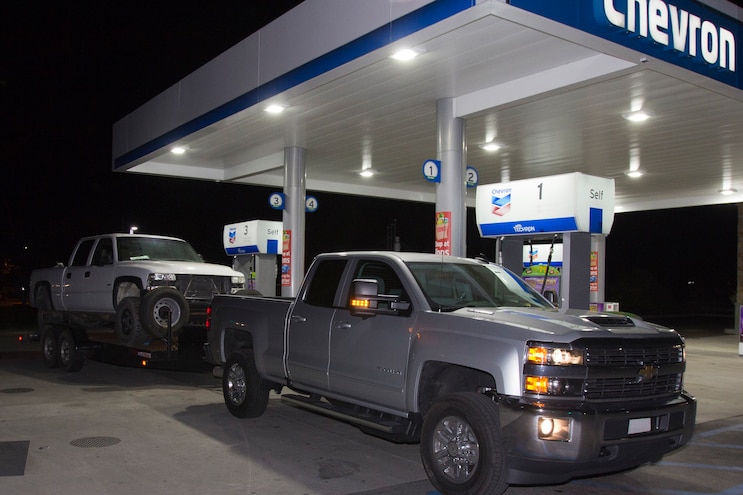 You know the saying—time flies when you’re having fun. And as fun as it’s been heading up 8-Lug HD Truck and Work Truck Review, I realized there was a missing link: I didn’t actually own a truck that perfectly applied to the titles I worked on. I suddenly felt like I was missing out on the hands-on “lab” part of the “course” in which I was enrolled. I wasn’t behind the wheel (my own wheel) of any of the trucks we regularly covered. How could I fully immerse myself into my titles’ worlds without the right tool? Ah, just the thought led to an unshakable conviction to buy a truck, and so in the November issue of 8-Lug I threatened to pursue personal project truck ownership, and I can say that half a year later, it happened.
All the stars aligned, and I am now the proud owner of a work-truck white, extremely straight-bodied ’02 Chevy Silverado 2500HD Crew Cab 4x4. Why so old, you ask? The answer is twofold: I can’t (don’t want to) afford anything much newer, and having owned a ’99 Chevy S-10, I frankly wanted the HD of the same era with the matching front end. It just brings back good memories of my high school days. Why a Chevy? Refer to the previous sentence; plus, the LB7 Duramax was the perfect powerplant for us, at the right price, too. In addition, we already have friends, family, and coworkers with Cummins and Power Stroke trucks. 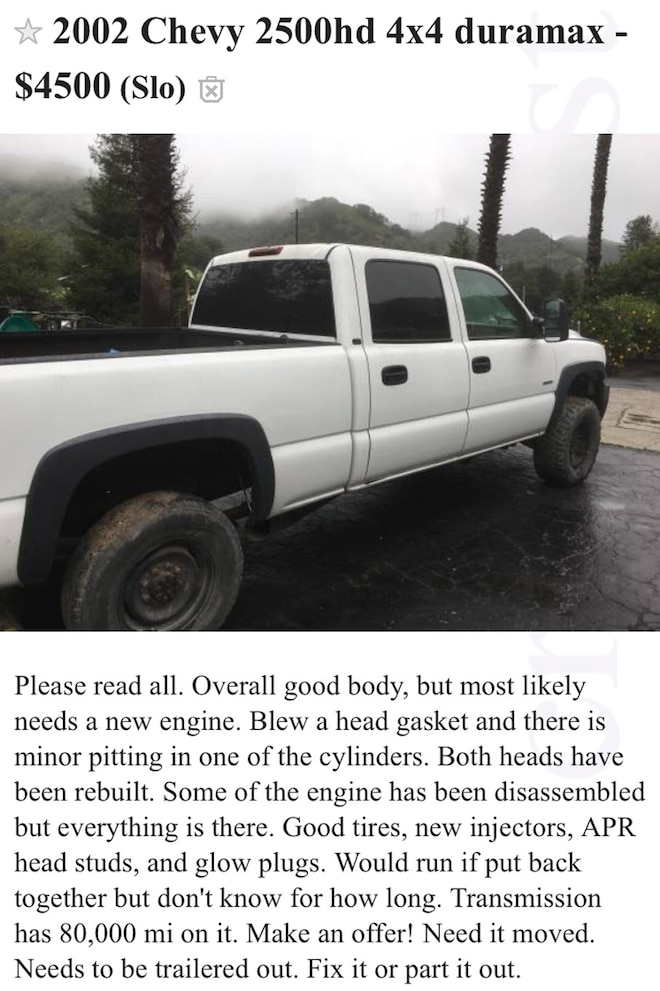 View Photo Gallery | 3 Photos
Photo 2/3   |   Here’s the original Craigslist ad for our newly acquired ’02 Chevy Silverado 2500HD truck. We were hoping the engine’s condition was exaggerated, but unfortunately this was a pretty accurate report. The engine is now out of the truck, awaiting new heads, pistons, and, while we’re at it, some other goodies we think will be advantageous. We’ve already learned a lot, which was a big objective with this undertaking. It’s all about the journey!
Once we narrowed down our search to an LB7 Duramax truck, the hunt for the right truck still took some time. First off, the trucks sold very quickly; many were snagged within hours of posting. Next, some were just too much of a compromise, having the wrong bed/cab configurations or two-wheel-drive drivetrains. Also, some had way too much body damage for our liking, which would take more of an investment to fix than we were looking for. Lastly, we could get the “perfect” truck for 10 grand more than we wanted to spend, which eliminated another handful of trucks. After all, a turn-key truck wasn’t the point of this purchase—we wanted something to tinker with! Patience and self-control proved valuable during this exercise.
We inquired about this particular Duramax truck on a Saturday night and received an email back from the owner before church on Sunday morning. My husband casually mentioned its potential as we headed out the door, to which I gave the green light to pursue. On the way to church, we made arrangements for a 220-mile journey to pick up the truck. After church, we hooked up our trailer and made it happen. By nightfall, we headed home, toting our new prize. I aptly named the truck Impulse in honor of its quick acquisition and reckless abandon with which it became part of our family. There is much damage to be done when a husband and wife are both into trucks! Count your blessings, men and women who have rational counterparts who keep you from making impulsive automotive purchases!

View Photo Gallery | 3 Photos
Photo 3/3   |   What do you think went through the seller’s mind when we showed up in a ’17 2500HD? It just so happened we were testing this new HD Chevy when the opportunity to pick up the old Duramax truck arose, and you can’t really test an HD truck without getting in some towing, right? In case you were wondering, the new L5P Duramax towed like a champ, with total control and confidence—kind of like it was meant for such jobs!
I have to be honest: I was underwhelmed by the truck’s condition. After all, we had only seen one exterior picture, but having traveled this far, we were going to buy it no matter what. The interior looked like a rabid raccoon had gone haywire looking for a prized piece of leftover pizza. I don’t even know how you mangle a driver seat cushion so badly. There were engine parts strewn across every sitting surface, and the floor looked as if it had absorbed the maximum amount of grease and oil possible, with a nice coating of sand on top for good measure. There were unspeakable items hidden between seat cushions, indicative of what might have happened in this truck. Poor truck. Poor, poor truck. The bed was full of more engine parts and miscellaneous random stuff, including a half-burned piece of wood, presumably from the night she died.
Stay tuned as we give this hot mess of a truck a much deserved makeover. Our first mission is to restore (and upgrade, while we’re at it) the old sturdy LB7 Duramax to reliable running condition. After all, a truck that doesn’t drive is of little use in the work truck world. Then we’ll tidy up the interior and exterior in hopes of attaining a comfortable, modest, driveable work truck suitable for towing, hauling, and family recreation.

- OF
By Monica Gonderman
665 Articles