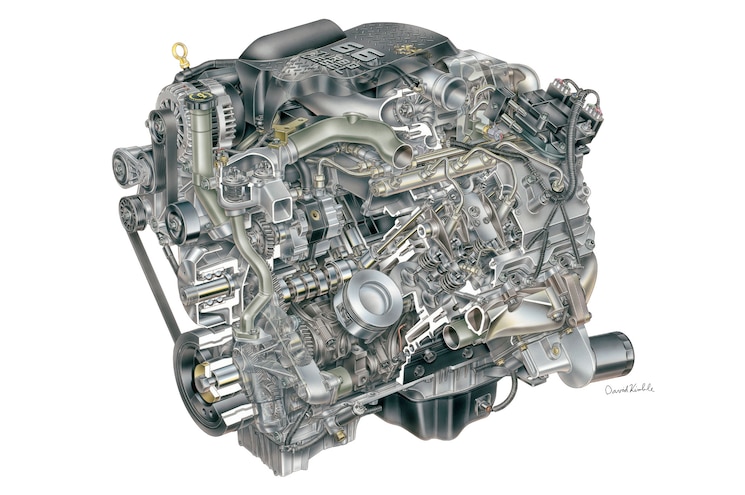 Late last week, General Motors announced it had built its two millionth Duramax engine, an L5P unit bound for either a 2017 Chevrolet Silverado HD or GMC Sierra HD. The L5P, which was recently introduced for the 2017 model year, is the most powerful and torque-rich Duramax engine ever, at 445 hp and 910 lb-ft.
The L5P is a clean-sheet redesign of an engine family that’s powered Chevy and GMC trucks since the 2001 model year. That Duramax lineage is well regarded among diesel enthusiasts from its first 32-valve, common-rail direct-injected 6.6L V-8 ancestor, the LB7.
To commemorate the two millionth Duramax engine, let’s have a look back at what makes this powerplant so special.

The Duramax LB7 is a 6.6L V-8 with four valves per cylinder, a cast-iron engine block with aluminum heads, and high-pressure common-rail injection. It produced 300 hp at 3,100 rpm and 520 lb-ft at 1,800 rpm, which were segment-best numbers at the time. The unique injection system was a bit problematic early on, but with those issues resolved, the LB7 can be a very reliable engine. Every Silverado and Sierra optioned with the Duramax engine could be ordered with a stout five-speed automatic transmission supplied by Allison, although a manual transmission was standard. 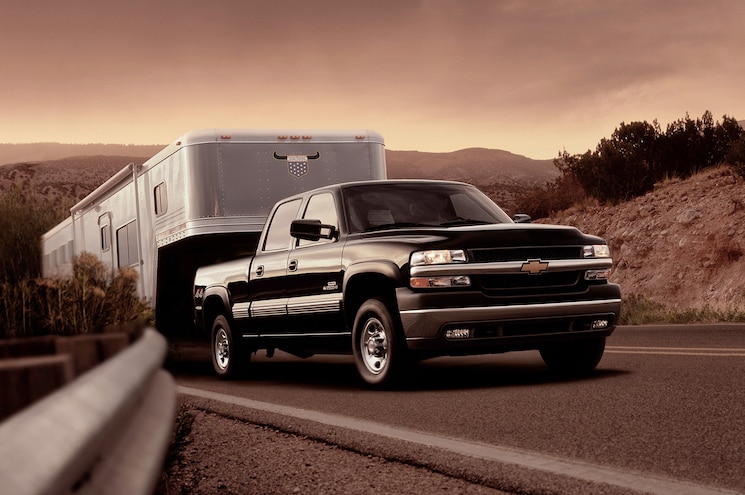 Curing many of the problems of the first Duramax, the LLY received a redesigned valvetrain for improved maintenance access, a variable-geometry turbocharger for improved throttle response and low-end power, and an exhaust-gas recirculation system to help it meet stringent emissions regulations. Power and torque were up to 310 hp at 3,000 rpm and 605 lb-ft at 1,500 rpm. Of note, the LLY was also available in the 2006-2007 Chevrolet Express and GMC Savana, though power was restricted slightly to preserve the vans' four-speed automatic transmissions. 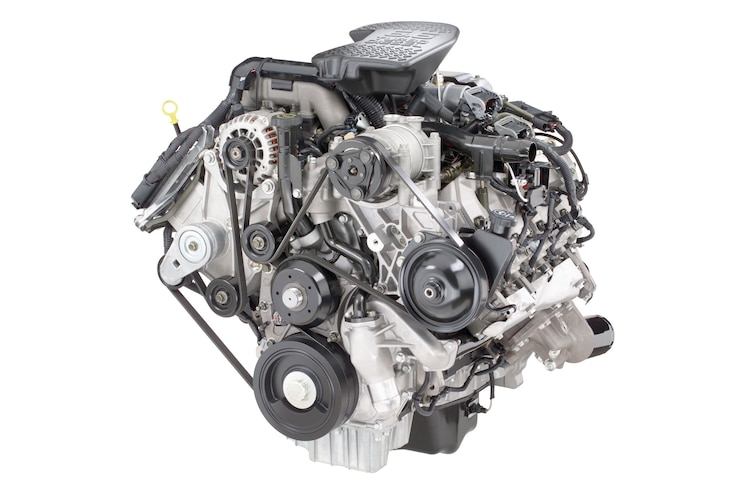 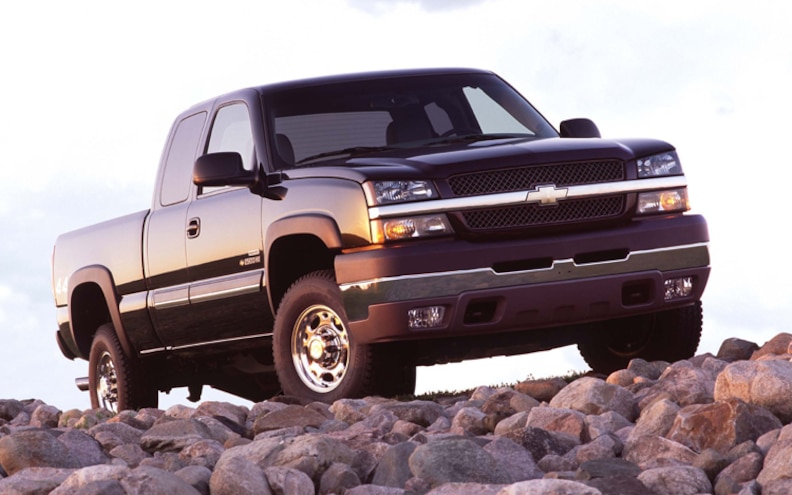 The LBZ was a near-total reimagination of the proven Duramax formula. Featuring stouter connecting rods, new pistons, higher-pressure fuel injection, and improved emissions controls, the LBZ is a favorite of diesel enthusiasts thanks to its appetite for punishment. 360 hp and 650 lb-ft were on offer. Taking full advantage of that engine output is another version of the Allison 1000 automatic transmission, this time featuring six forward gears. It’s not hard to see why this engine was a popular choice when new and continues to be coveted by Duramax fans on the used-truck market. 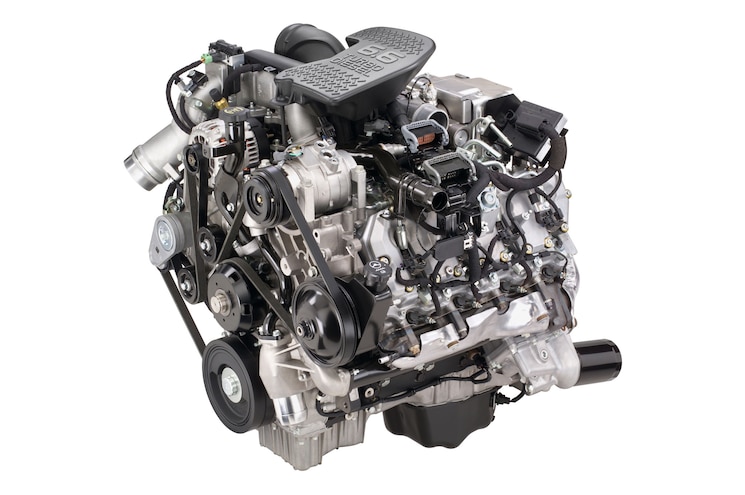 When the Silverado HD and Sierra HD were redesigned for the 2008 model year, they came with a new diesel engine option, the Duramax LMM. This engine was the first to use a diesel particulate filter, and it came with other emissions enhancements, including cooled exhaust gas recirculation, closed crankcase ventilation, and new engine control software. In spite of those hurdles, the LMM produces 365 hp at 3,200 rpm and 660 lb-ft at 1,600 rpm. Those numbers put it right in the hunt with contemporary Cummins and Power Stroke engines. The LMM was offered in the Chevrolet Express and GMC Savana through 2010, when they were replaced with the LGH. 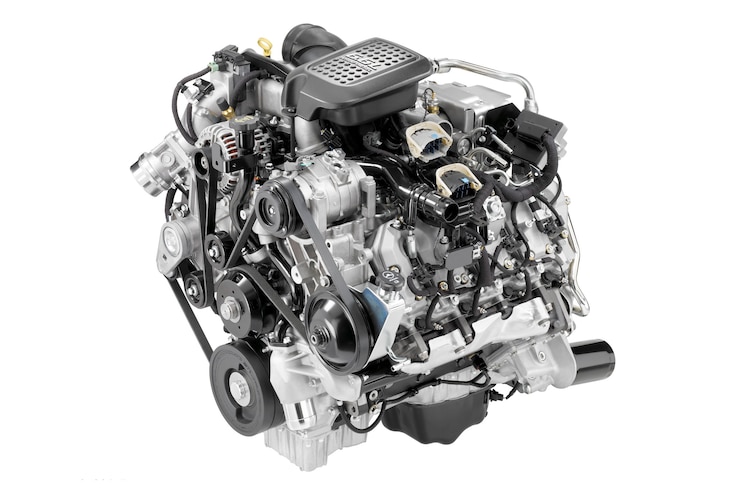 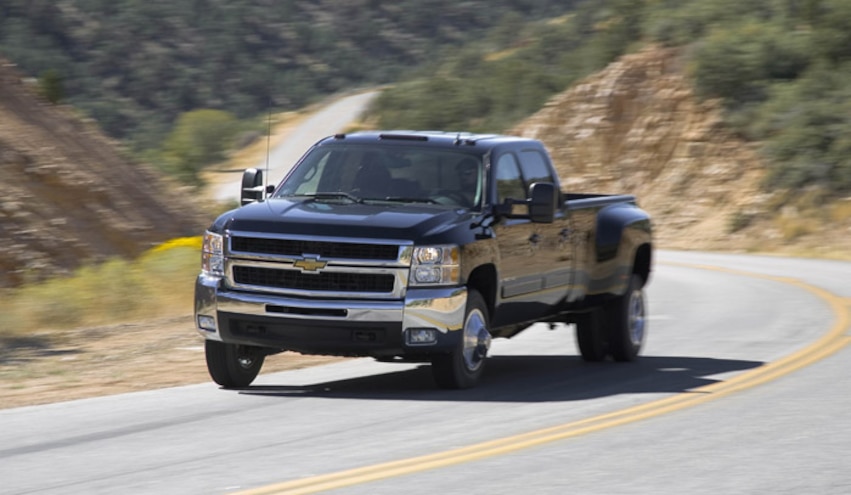 Reducing emissions even further was the LML, which improved on the LMM’s design with higher-pressure fuel injection, a new urea-injection system, and improved fuel system that could now tolerate B20 diesel fuel (a mix of 20 percent biodiesel and 80 percent conventional diesel). Furthermore, changes in the engine’s design improved rigidity and durability, helping GM engineers squeeze 397 hp and 765 lb-ft of torque from the LML. Those numbers were segment-best for a brief moment, but then the diesel wars began and the LML languished at the bottom of the numbers heap for a few years. Even so, the LML is a supremely capable, clean powerplant. 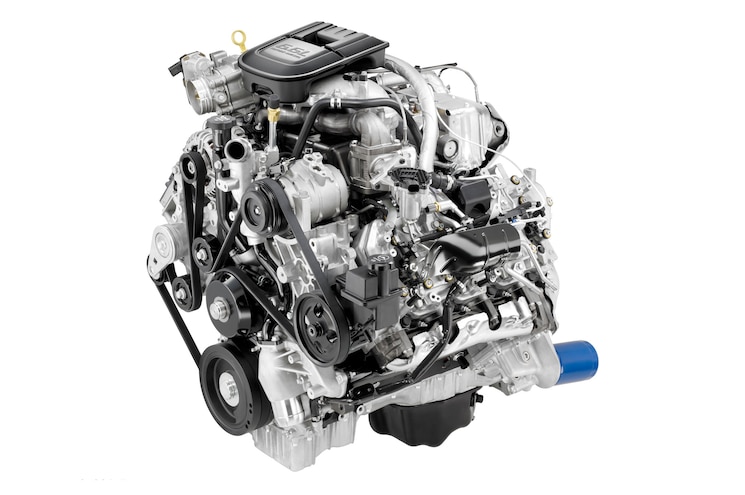 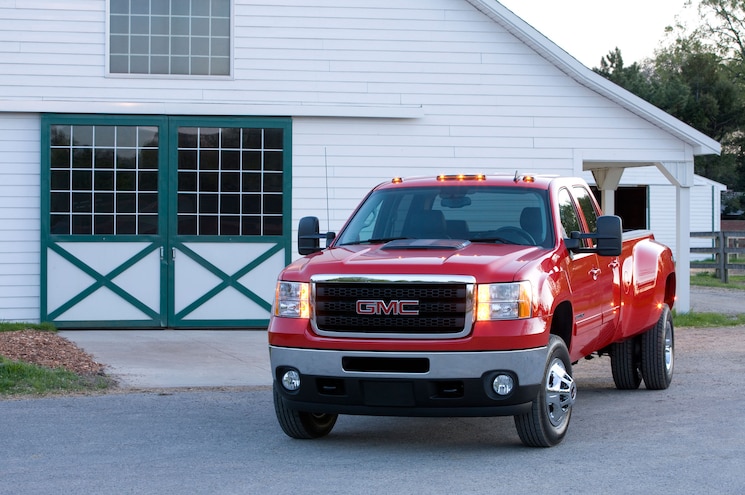 Designed purposely for use in the Chevrolet Express and GMC Savana, the Duramax LGH, like its corporate cousins, is a turbocharged 6.6L V-8. Rated at 335 hp and 685 lb-ft for chassis cab applications and 260 hp and 525 lb-ft for cargo and passenger vans, the LGH is downrated a bit compared to the contemporary LML, suiting the vans' reputation for longevity and preserving the HydraMatic six-speed automatic transmission.

The 6.6L Duramax V-8 was discontinued for the vans' 2017 model year, and GM promises it will replace the big diesel with a version of the 2.8L Duramax I-4 soon. 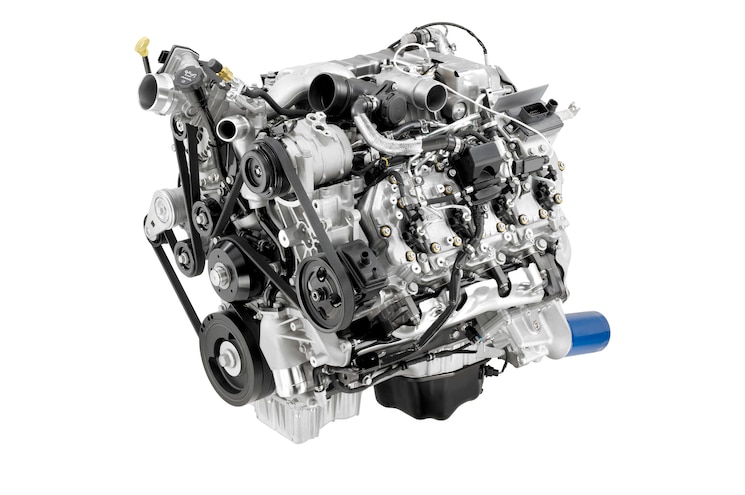 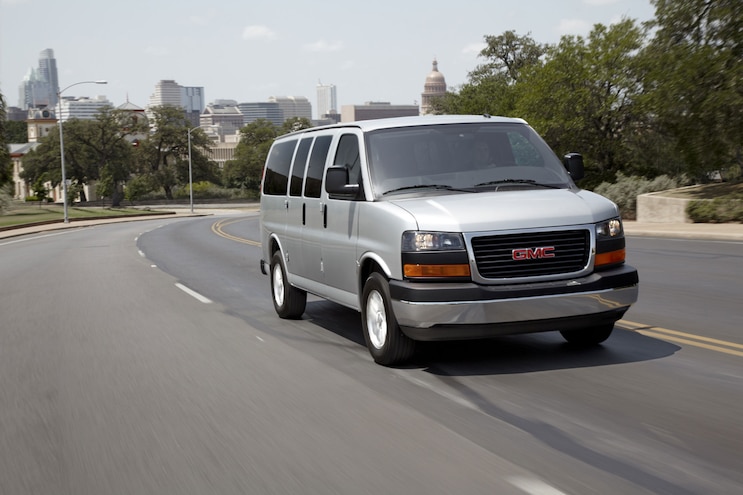 Which brings us to the L5P. Sharing only its bore and stroke dimensions with the Duramax engines of the past, the L5P is the first total redesign of the engine family, with changes aimed at improving fuel economy, durability, and emissions, while increasing power to a tops-in-segment 445 hp and torque to a competitive 910 lb-ft. 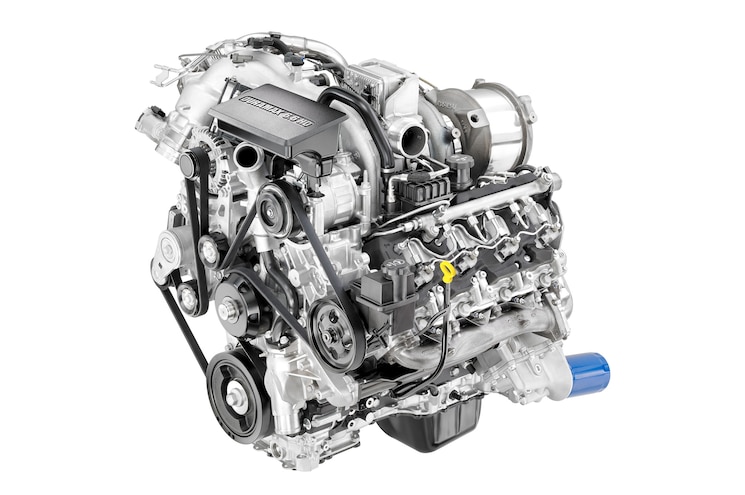 View Photo Gallery | 21 Photos
Photo 12/21   |   2017 General Motors Duramax L5p
We took a deep dive into the L5P a few weeks ago, taking it apart piece by piece to see what makes it improved over the LML. It’s a comprehensive look into the engine, and we’ve no doubt it will become a fan favorite as more of the hood-scooped Silverado and Sierra HD pickups make their way into customers’ hands. 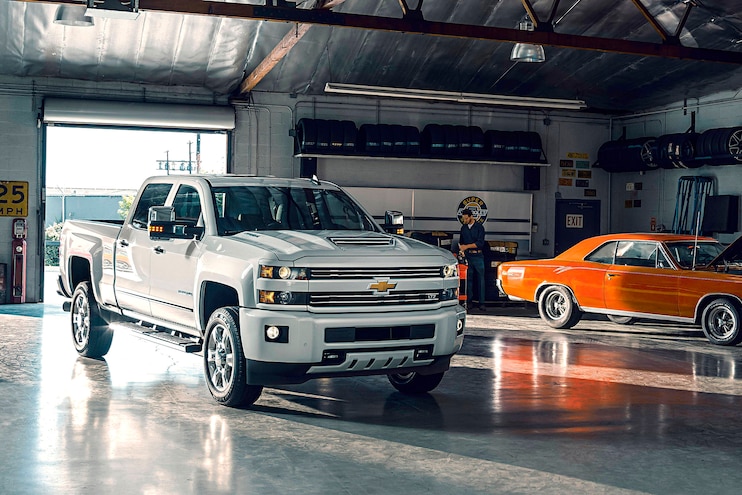 View Photo Gallery | 21 Photos
Photo 13/21   |   2017 Chevrolet Silverado 2500hd
Overall, with two million Duramax engines on the road and no sign of stopping any time soon, it’s clear that GM’s engine family is popular among enthusiasts and consumers alike. It will be exciting to see what the geniuses behind the Duramax family will come up with next.
Source: General Motors, DMAX 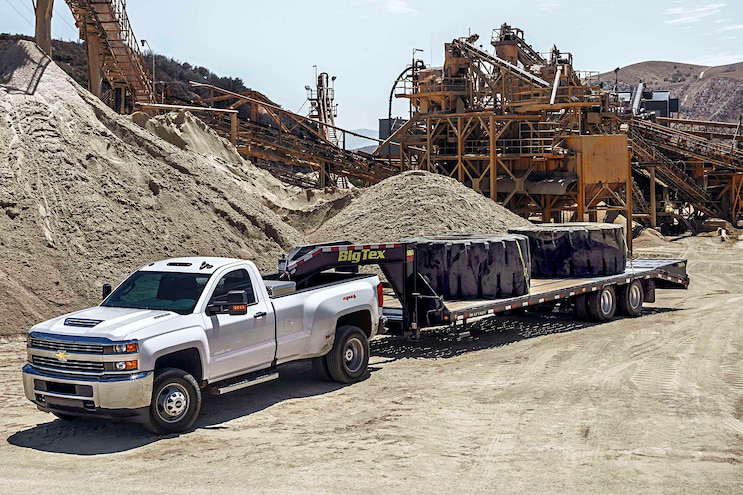