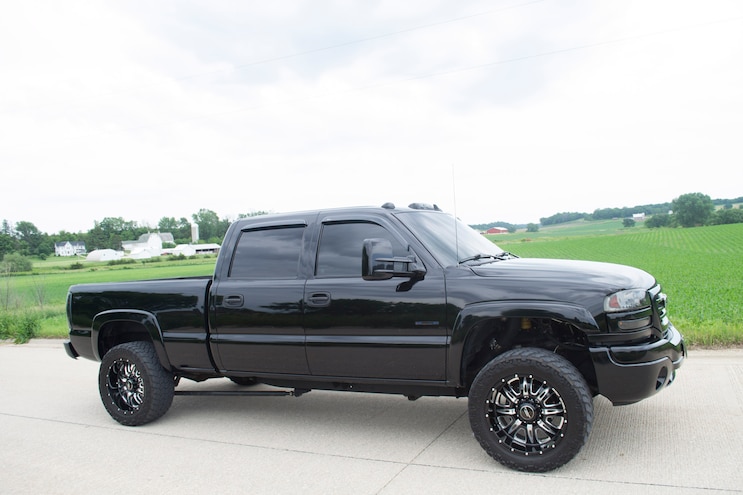 Our story began when Jules Wenzel of Dubuque, Iowa, laid eyes on the perfect starter truck—a one-owner ’06 GMC Sierra 2500HD with only 90,000 miles on the odometer. “I just wanted a little more power, then things just sort of took off,” Jules recalls. Like many enthusiasts, Jules initially added simple bolt-ons that quickly overwhelmed the stock Allison 1000 six-speed automatic transmission. The unit was rebuilt by BananaMax Motorsports in Waterloo, Iowa, using parts from Goerend Transmission. The torque converter was upgraded to a triple-disc, clutch packs were added, and a C2 oiling kit was installed. To control heat and add fluid capacity, a Goerend deep transmission pan was also installed.
Jules was happy with his truck’s newfound power, but that joy was short lived. “I work at my family's towing business, and I didn't like the EGT readings I was seeing,” he says. “I decided I should use compound turbochargers, and before I knew it I had the engine down to the short-block.” Stage two of the build consisted of ARP cylinder-head studs with fresh gaskets, pushrods from Merchant Automotive, Hamilton Cams valvesprings, and a complete ARP top-end bolt kit.
Since Jules wanted his GMC to still drive and tow like a stocker, an extremely responsive 63.5mm Cheetah turbo from Fleece Performance Engineering was installed in the engine valley for high pressure, fed by Steed Speed exhaust manifolds. Forcing air into the Fleece ’charger is a huge 80mm S400 from BorgWarner. Total boost from the two turbos is 55 psi. 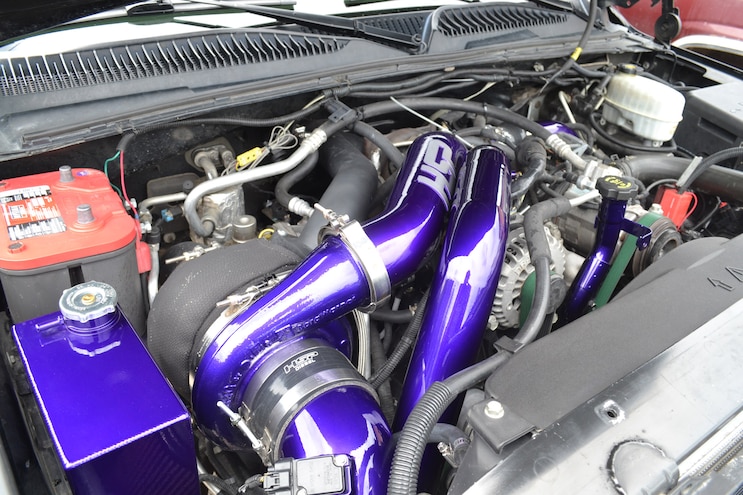 View Photo Gallery | 20 Photos
Photo 2/20   |   When Jules Wenzel pops the hood on his ’06 GMC Sierra 2500HD, it's not hard to tell where he invested his time and funds. On the chassis dyno, the 6.6L Duramax–powered rig has churned out 782 hp and 1,403 lb-ft of torque.
While the engine was already torn apart, Jules decided to upgrade the truck’s fuel system as well. It already had a FASS lift pump, but he took the chance on adding an Exergy Performance 10mm stroker CP3 injection pump , as well as a set of 100-percent-over injectors from S&S Diesel Motorsport. As a final nod to reliability, Jules installed a pinned water pump from Danville Performance to ensure he will never have to replace it again.
In addition to engine and transmission modifications, Jules also took the opportunity to upgrade the GMC's suspension. Bilstein 5100 shocks were installed at all four corners, and CalTracs traction bars were bolted on to control axlewrap. “I built the truck mainly to tow, but I always wanted to be able to do four-wheel-drive launches if the need comes up,” Jules says. This means the front end had to be completely redone, and Jules rejuvenated the front suspension using Moog tie rods, Pacific Performance Engineering sleeves, Cognito Motorsports idler and pitman arms, and a PPE centerlink.
All of Jules’ hard work paid off in 2016, when the truck was dyno tuned at Calibrated Power Solutions. “I expected to see a good number, but I had to look twice after it made 782 hp,” Jules laughs. “On a super-safe tune with a single injection pump, yeah I'm happy with that!” As nice as big power numbers are, Jules admits he usually runs the truck turned down to around 600 hp to save the stock connecting rods. Another 100,000 miles have been recorded on the Sierra since he got it, as he’s traveled everywhere between Colorado and the Dakotas. “When you're hooked to a trailer and headed out to have fun, there's just nothing that can beat a built diesel.” We have to agree with that. 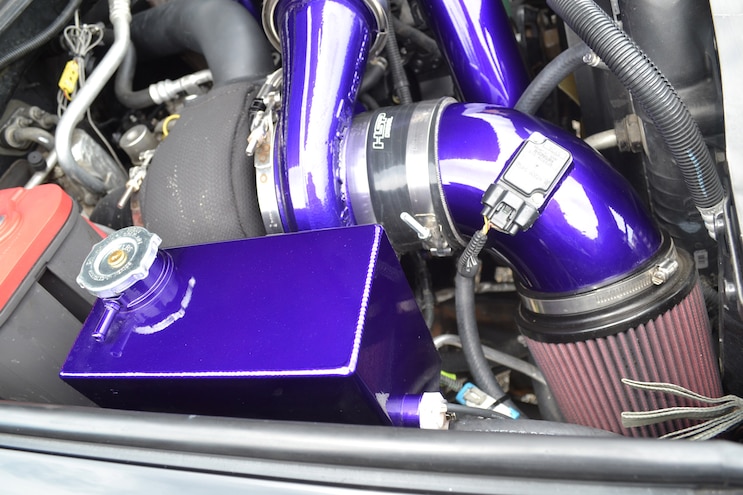 View Photo Gallery | 20 Photos
Photo 3/20   |   The HSP Diesel compound-turbocharger kit is powdercoated Illusion Purple, and it features all the pipes, lines, clamps, and downpipes to add a second larger turbocharger to the mix. 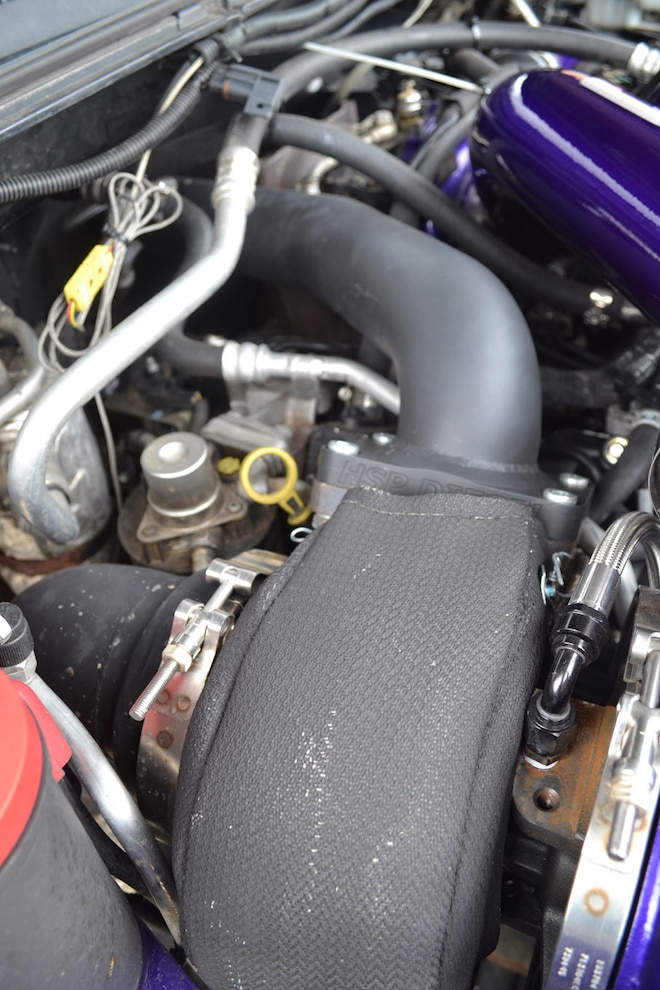 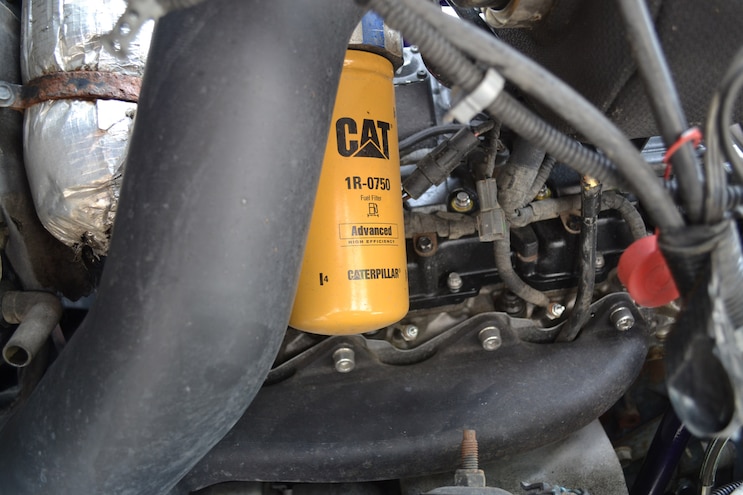 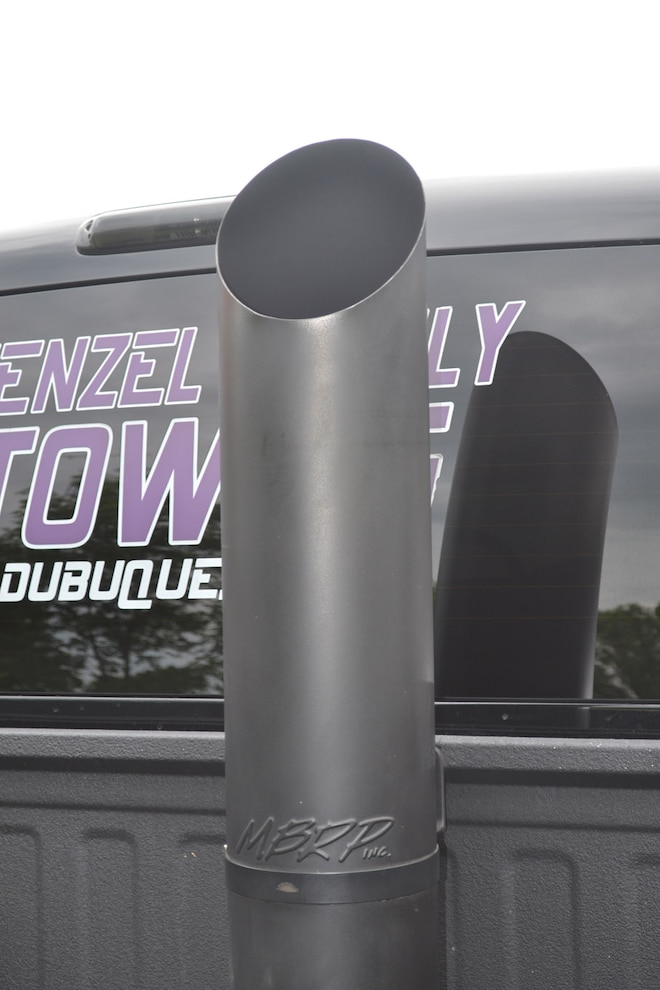 View Photo Gallery | 20 Photos
Photo 6/20   |   Exhaust is directed back to the bed, where it exits right behind the cab through a 7-inch MBRP stack. 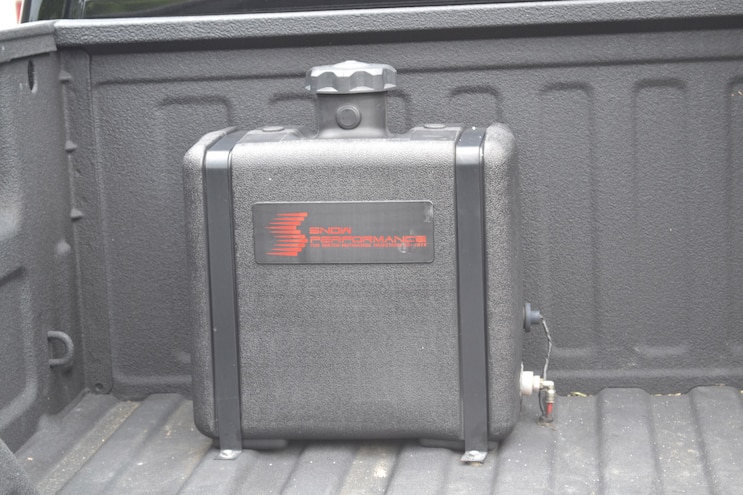 View Photo Gallery | 20 Photos
Photo 7/20   |   Jules still uses a Snow Performance water-methanol injection system that dates back to when the truck had a single turbo. “We could probably make 800 hp with the water-methanol on, but I don’t want to push it,” Jules says. 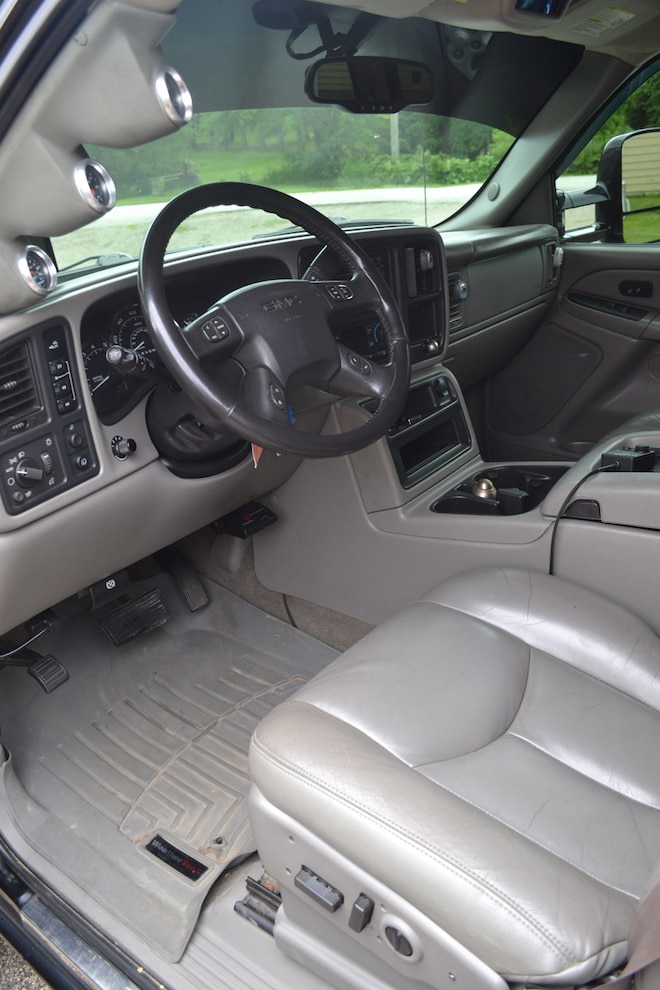 View Photo Gallery | 20 Photos
Photo 8/20   |   The factory interior has treated Jules well, and he makes sure to keep it in good shape. 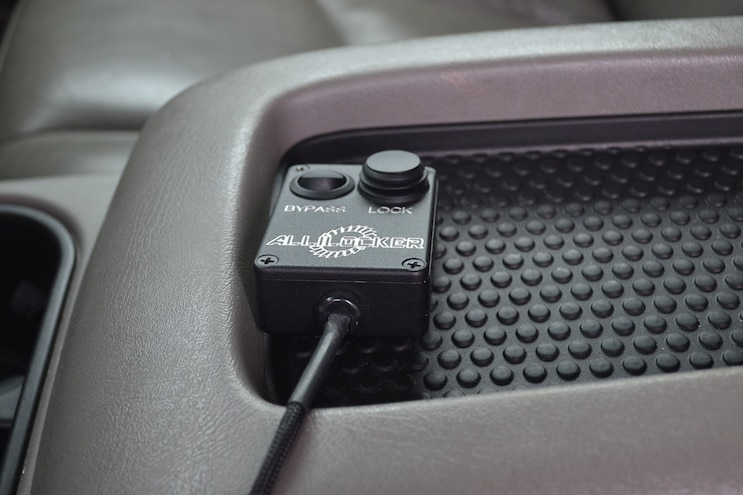 View Photo Gallery | 20 Photos
Photo 9/20   |   Fleece Performance Engineering's AlliLocker enables Jules to lock up the torque converter whenever he wants. This is useful for hot-rodding and keeping EGT down while towing. 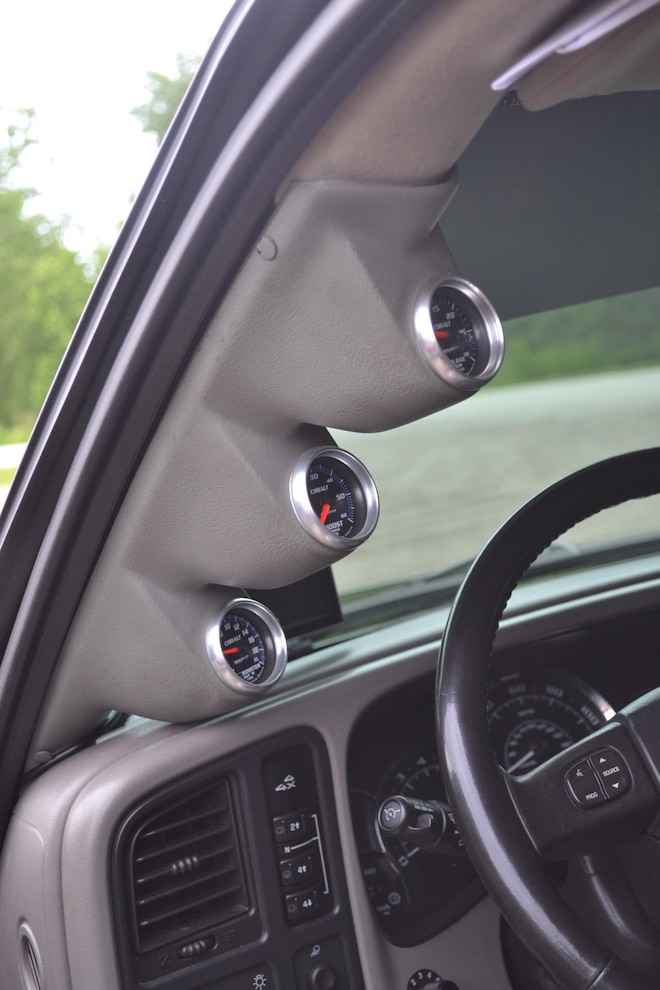 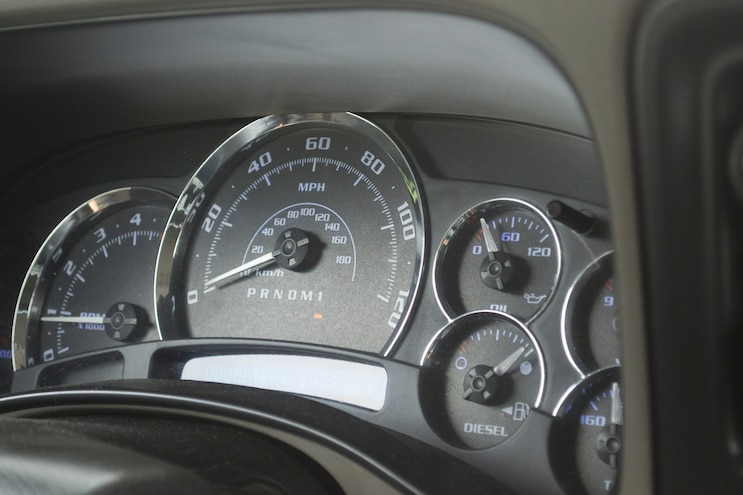 View Photo Gallery | 20 Photos
Photo 11/20   |   Jules has made many small modifications to give the truck a custom touch. For instance, the stock gauge cluster is replaced with one from a Cadillac Escalade, giving the Sierra 2500HD a little extra class. 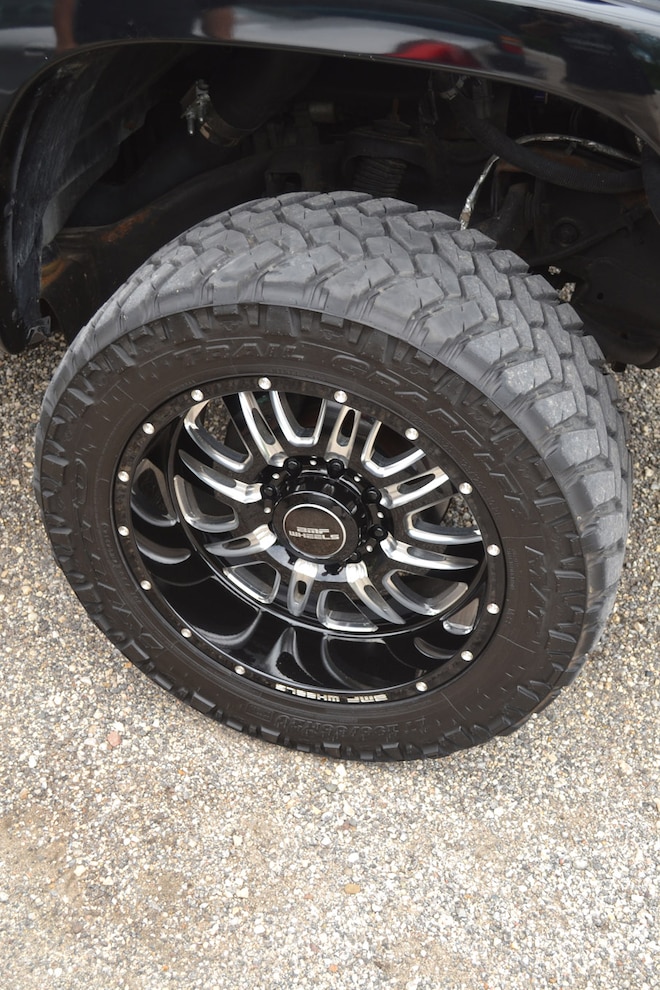 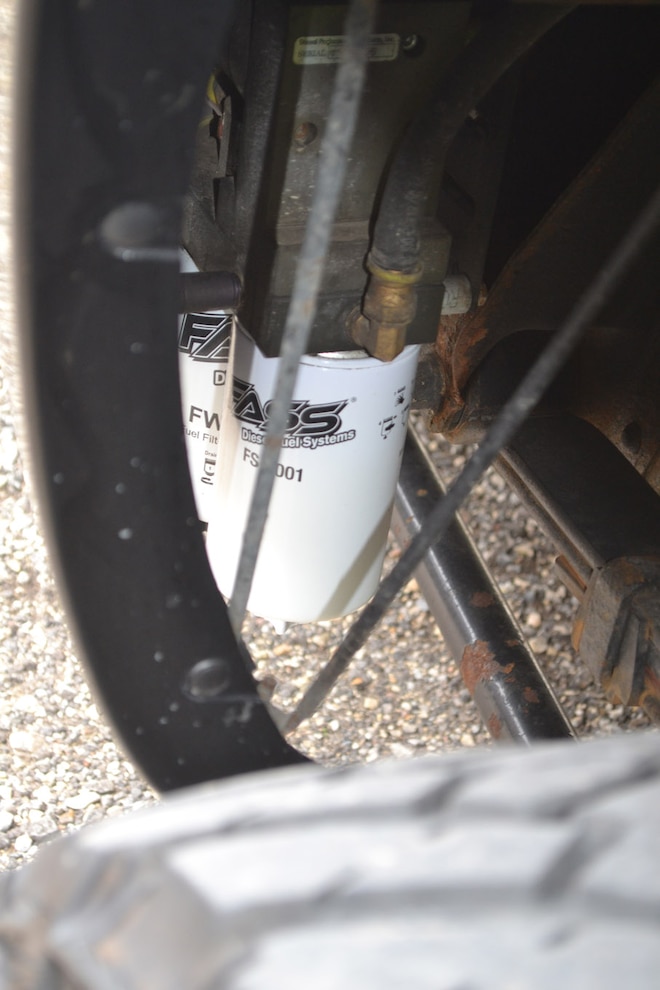 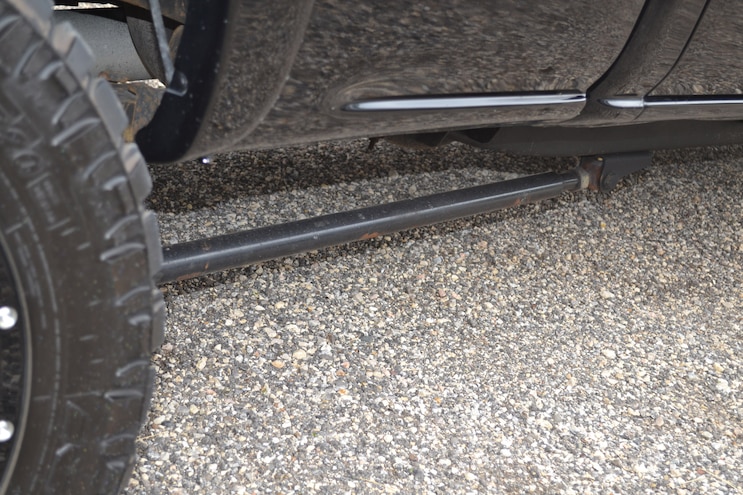 View Photo Gallery | 20 Photos
Photo 14/20   |   Traction issues in two-wheel drive are kept to a minimum, thanks to a set of CalTracs traction bars, installed by J's Performance, in Dubuque, Iowa.