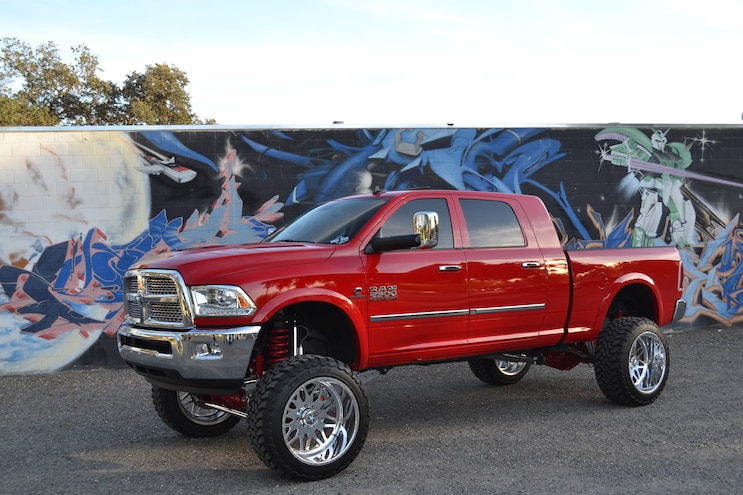 New Rams are very capable trucks, but that doesn't mean they can’t be improved. Jaf Karn of Yuba City, California, set about modifying his ’15 Ram 2500 in virtually every way. From computer tuning to its elevated stance and custom powdercoated and chromed suspension, Jaf's Ram was built to turn heads while still being a functional work truck.
It all started with a lift, as Jaf knew that was the first thing he wanted. With help from Ridin' High Motorsports in Yuba City, California, a radius-arm lift from Full Throttle Suspension was fitted to the truck. With 10 inches of lift, the suspension was hanging out in the breeze, so Jaf enlisted the help of Show Off Coatings and Modesto Chrome to make sure the underside of the Ram looked just as good as the shiny side. 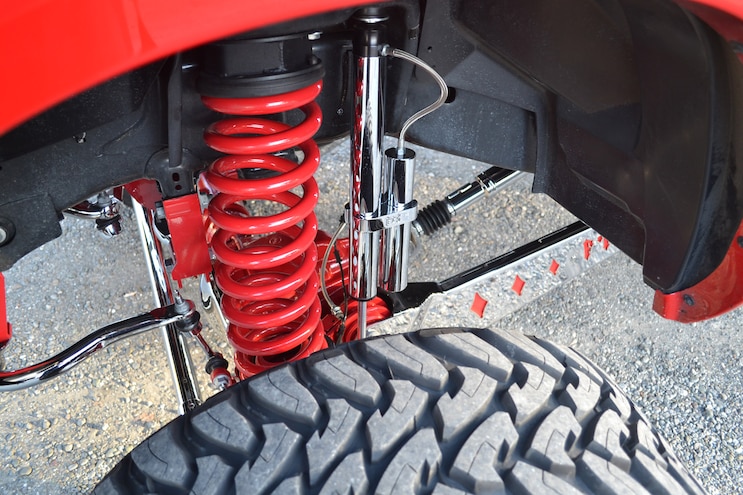 View Photo Gallery | 16 Photos
Photo 2/16   |   Jaf's Ram has a Full Throttle Suspension setup that matches the exterior of the truck. The lift is a radius-arm design installed by Ridin' High Motorsports out of Yuba City, California. 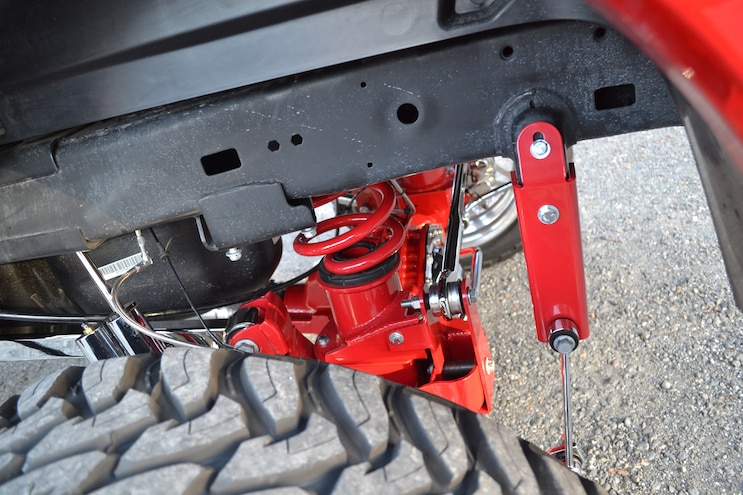 View Photo Gallery | 16 Photos
Photo 3/16   |   The rear coil suspension is part of Full Throttle Suspension’s lift kit and features revised spring mounts to keep the rear axle centered properly with the 10-inch lift.
A ’15 Ram is definitely no slouch in the horsepower and torque department, as it’s rated at 370 hp from the factory. Still, even with mostly stock components, there’s room for improvement through computer tuning. With a custom tune from PPEI and a DPF-back exhaust from MBRP, the Cummins engine now produces an estimated 470 hp at the rear wheels. 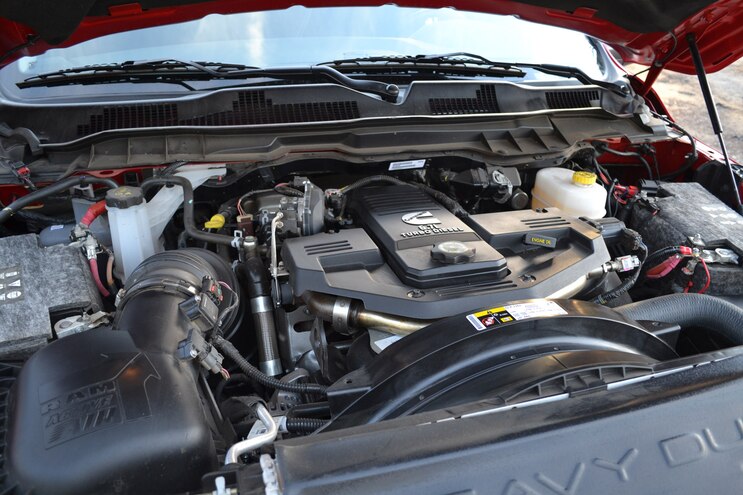 View Photo Gallery | 16 Photos
Photo 4/16   |   Cummins engines are known for their reliability and power. The 6.7L in Jaf's Ram has been pumped up to approximately 600 flywheel horsepower with tuning from PPEI.
With a stout platform, Jaf worked on improving numerous details in addition to the engine and suspension. When it came to the truck’s function, Jaf still wanted to be able to drive and tow with his ’15, so a B&W gooseneck hitch was installed in the bed. An indexing ring was also installed between the transmission and transfer case to keep the driveline angles happy. 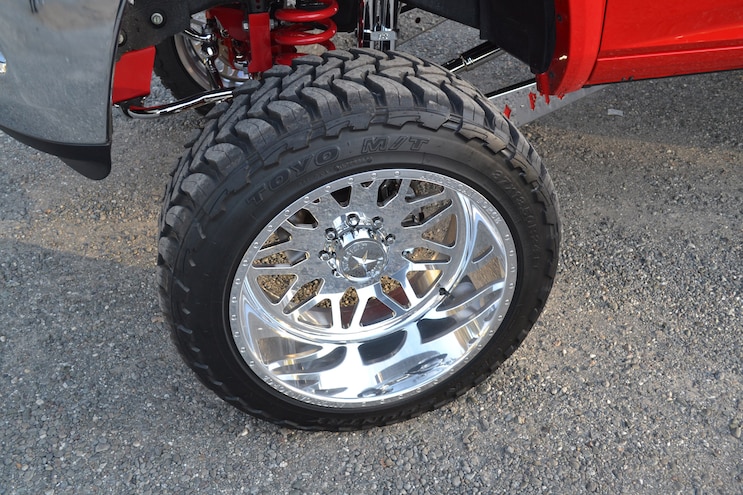 View Photo Gallery | 16 Photos
Photo 5/16   |   A truck’s wheels are at the heart of a build like this, so Jaf bypassed the usual 20s and 22s and went straight to a set of 24-inch Hydros from American Force Wheels.
Retractable side steps from AMP Research were installed, as were C4 rock lights. The final upgrade was a set of 24-inch American Force wheels and 37-inch Toyo tires that would perfectly complement the Ram’s lift. 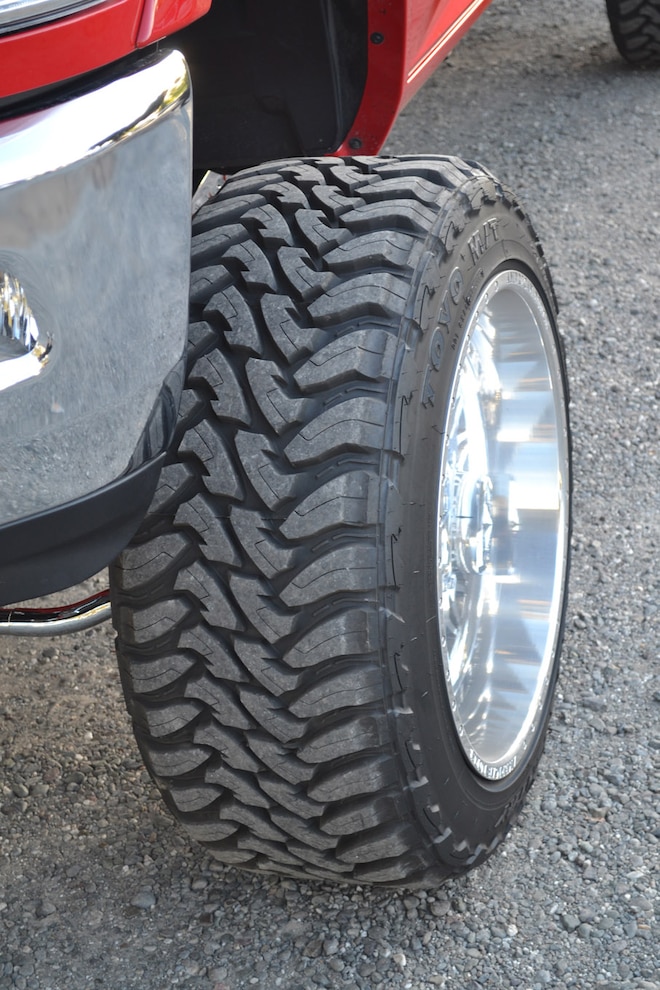 View Photo Gallery | 16 Photos
Photo 6/16   |   Jaf gave his truck an aggressive look by running a set of 37x13.50R24 Mud Terrain tires from Toyo Tire.
Now that the truck has more than a year on the clock, Jaf says the only thing he regrets about owning his Ram is that he didn't build it up sooner. We've seen Jaf at shows all across the West Coast, often trailering friends’ show trucks before polishing up his own. With plenty of show and plenty of go, Jaf's Ram is definitely ready for any kind of action. 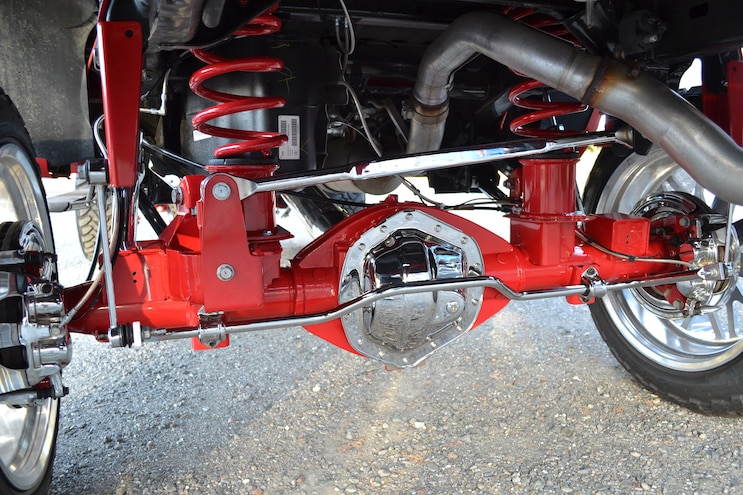 View Photo Gallery | 16 Photos
Photo 7/16   |   The rear axlehousing and suspension components have been powdercoated Flame Red, the same as the front. Also visible is the 4-inch MBRP over-the-axle exhaust that directs expelled gases from the rear of the truck. 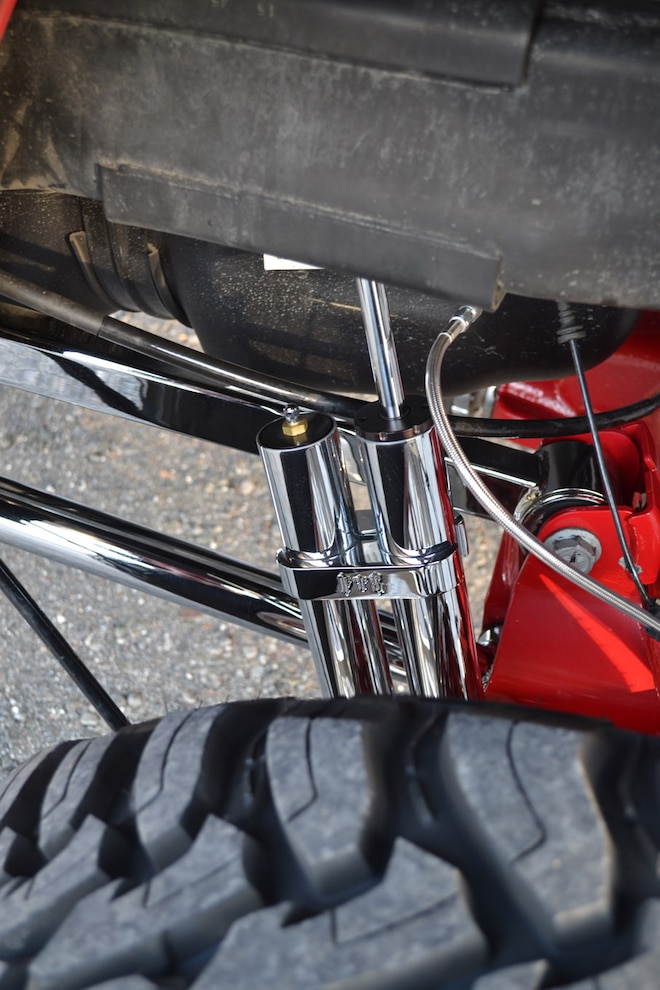 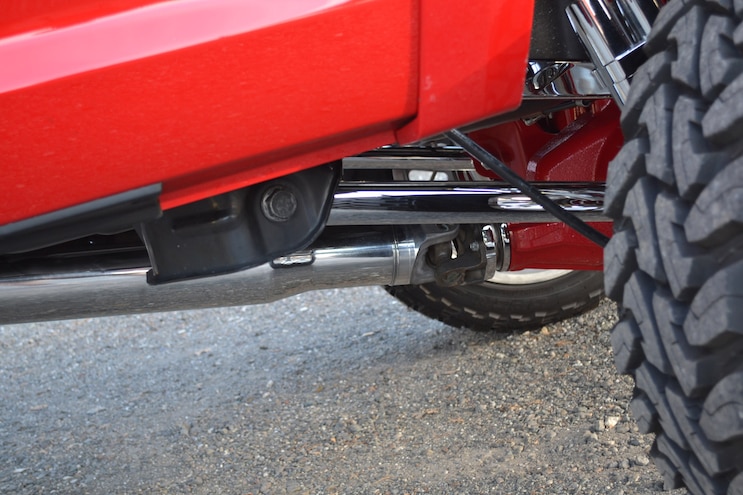 View Photo Gallery | 16 Photos
Photo 9/16   |   Not only has the suspension received special treatment, so has the rest of the driveline. The transfer case was upgraded with a clocking ring that re-angles the driveline, and both axles were powdercoated Flame Red. 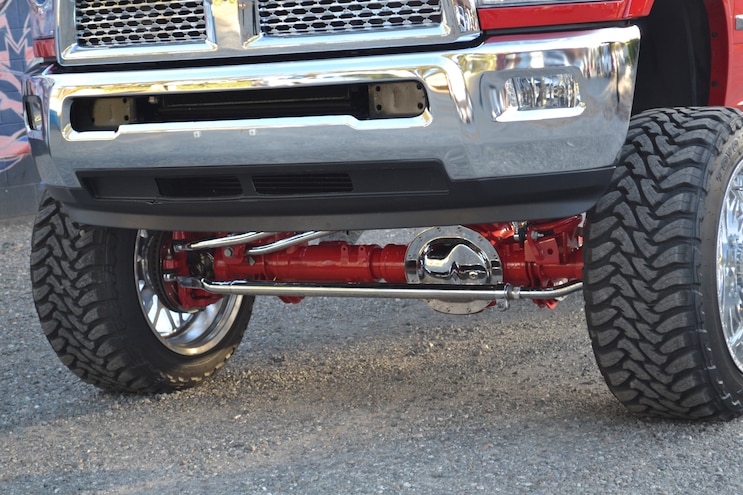 View Photo Gallery | 16 Photos
Photo 10/16   |   The front axle was also powdercoated, and the suspension and steering components were chromed by Modesto Chrome. 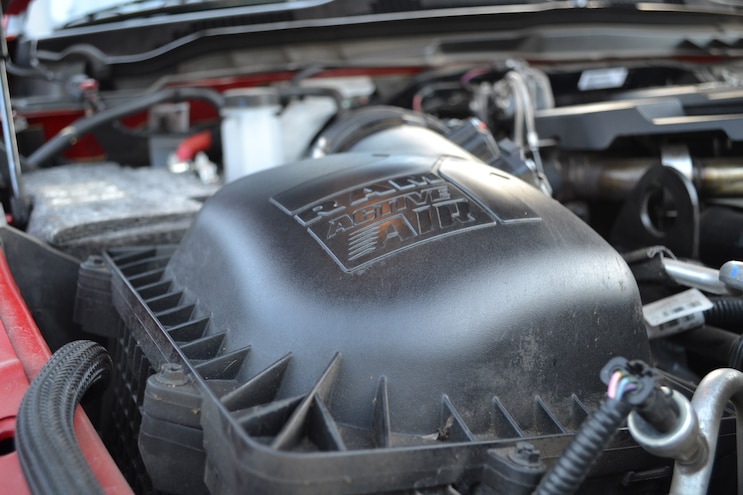 View Photo Gallery | 16 Photos
Photo 11/16   |   Quite a bit of technology goes into these new models. The Ram comes from the factory with a cold-air intake system that’s designed to direct fresh cool air into the engine. 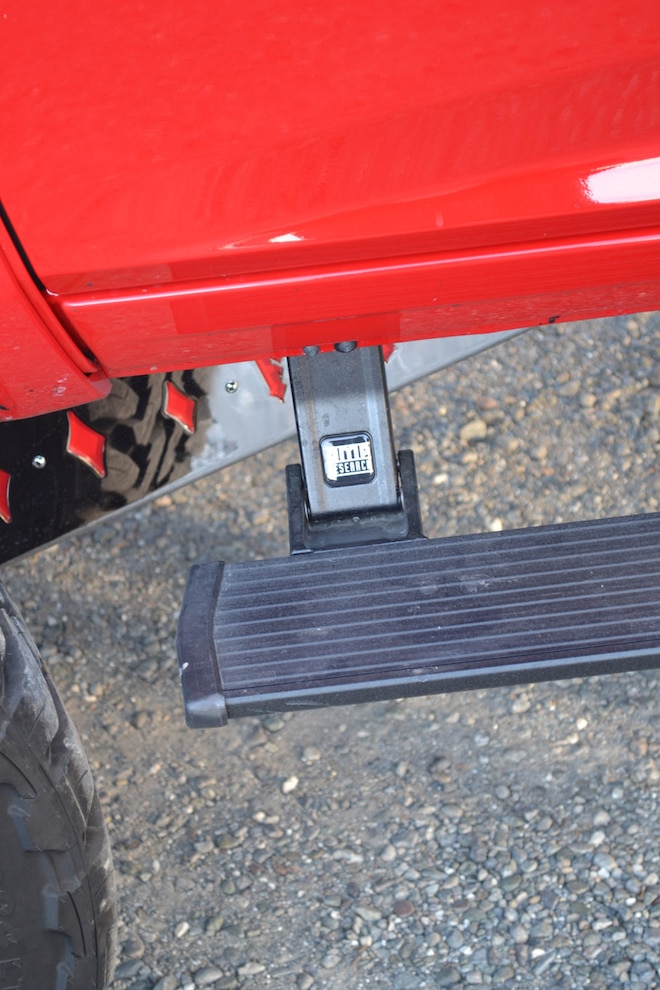 View Photo Gallery | 16 Photos
Photo 12/16   |   Side steps from AMP Research run the length of the rocker panels and are a big aid for any vertically challenged passengers who might be taking a ride in Jaf’s Ram. 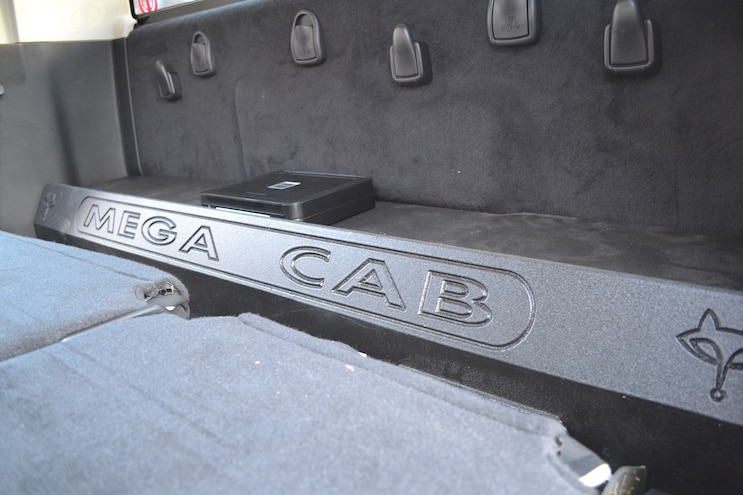 View Photo Gallery | 16 Photos
Photo 13/16   |   Jaf’s truck also has quite the stereo system, which combines Alpine components along with twin 12-inch subwoofers in a custom box.