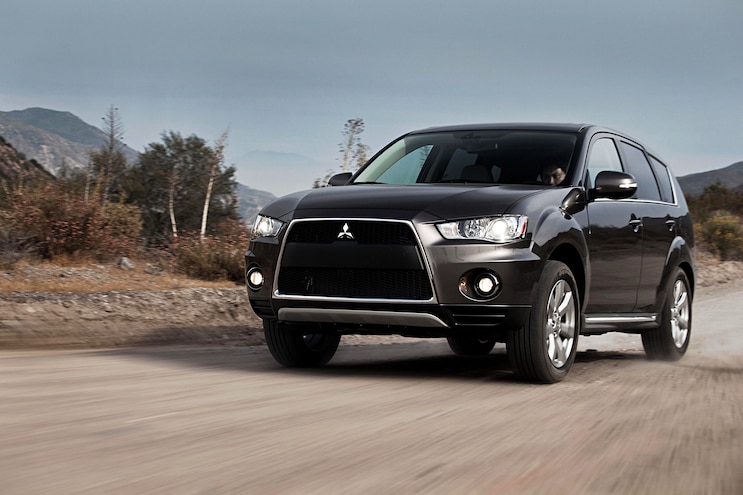 In these times where it seems obligatory for every vehicle to have an alpha-numeric handle, Outlander is a good name. It’s evocative and vaguely romantic, implying that its all-wheel drive system could spirit us away into the wilderness. Even though the reality is more down to earth, there’s still enough to recommend this crossover SUV.
Not be confused with the smaller Outlander Sport, the Outlander’s second generation spans the ’07 to ’13 model years. It’s based on a stretched version of the company’s GS platform, which was developed partly in collaboration with DaimlerChrysler, when that partnership was still going. Other vehicles using the same foundation include the first-generation Jeep Compass/Patriot. 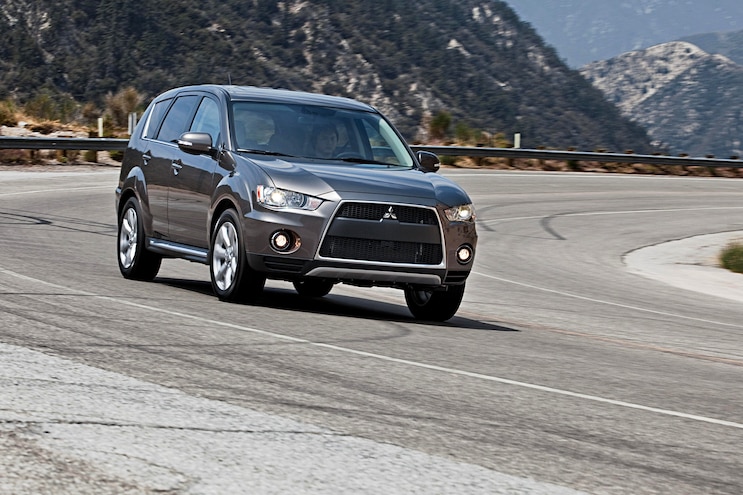 View Photo Gallery | 6 Photos
Photo 2/6   |   Outlander Gt
This Outlander debuted with a 3.0L V-6 as standard and a third-row seat optional, pushing the occupant count up to seven. The range started with ES, LS, and XLS trims, ES being front-drive only. It’s a bit low-rent, with 16-inch steel wheels, but at least it has power windows and reclining rear seats. LS gets alloy wheels, a leather-wrapped steering wheel, a roof rack, and a couple of 12V outlets. This trim is also eligible for more options. XLS has 18-inch alloy wheels, those third-row seats (which can fold flat into the floor, although the operation is fiddly), automatic climate control, keyless ignition, and Bluetooth. Seven-seater models have longer side curtain airbags for better protection. 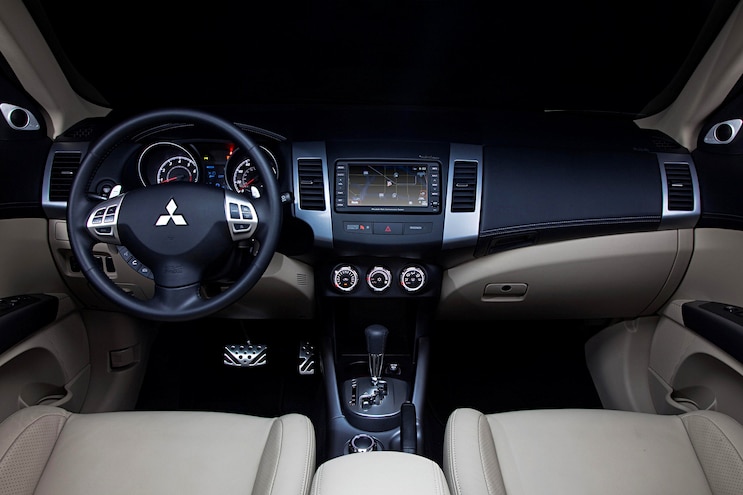 View Photo Gallery | 6 Photos
Photo 3/6   |   Outlander Gt Interior
Options include a sunroof, heated seats, leather upholstery, navigation, 650-watt/nine-speaker Rockford Fosgate audio system, xenon headlights, and all-wheel drive in the LS and XLS.
Initially, the V-6 made 220 hp and 204 lb-ft of torque, although in states with stricter emissions regulations, output is rated at 213 hp. This engine links to a six-speed automatic transmission. The XLS has the added bonus of paddle shifters mounted to the steering column. 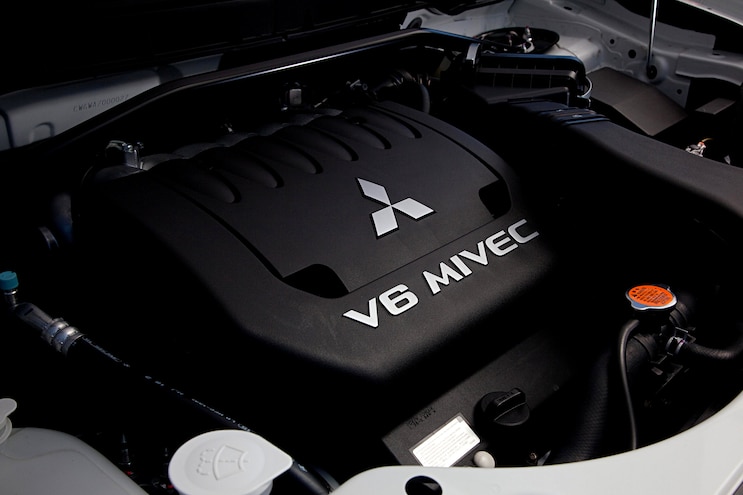 View Photo Gallery | 6 Photos
Photo 4/6   |   Outlander Gt Engine
The all-wheel drive system is pretty cool, a cut above the general “grocery getter” crossover hardware. It can be locked into front-wheel drive to save gas. An “auto” mode sends 15 percent of torque to the rear axle in normal conditions, up to 40 percent if necessary. A third mode sends an even torque split going to both axles but will nudge it up to 60 percent toward the rear.
Maximum towing capacity is 3,500 pounds and total cargo area is a generous 72.6 cubic feet. This is accessed by a two-piece tailgate, where the flip-down section can take 440 pounds and is part of the rear bumper, so the load floor is conveniently low.
A new SE trim arrived for ’08, slotting between the LS and XLS. The three lowest trim levels also received a fresh four-cylinder engine as standard: a 2.4L unit making 168 hp (162 in PZEV states) and 167 lb-ft of torque. This connects to a continuously variable transmission (CVT). The SE has the Rockford Fosgate audio, paddle shifters, and 16-inch alloy wheels as standard. 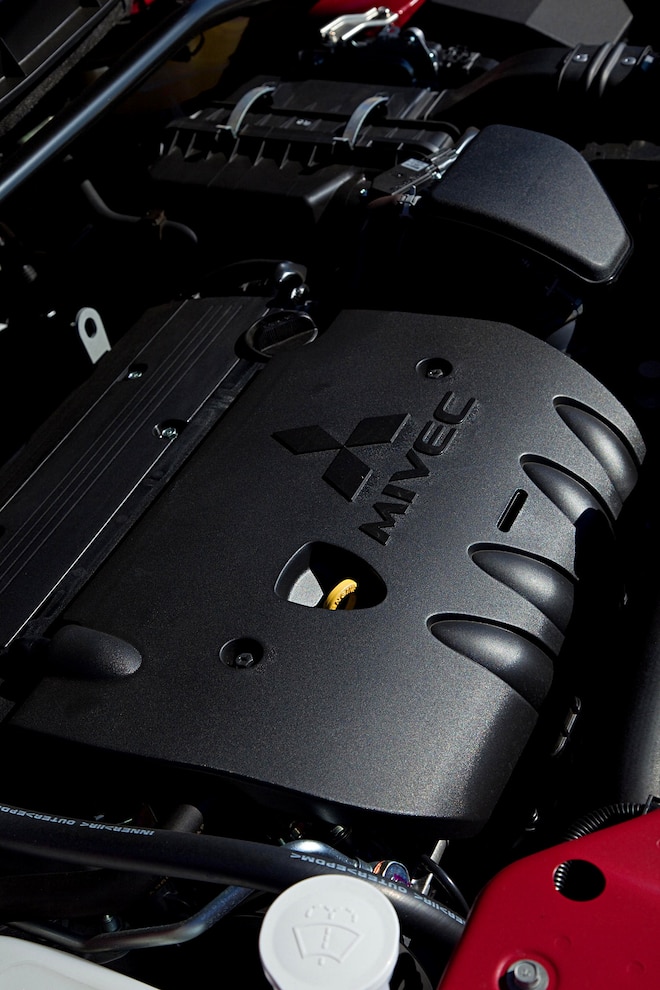 View Photo Gallery | 6 Photos
Photo 5/6   |   Outlander Se Engine
One year later, the SE trim could also be spec’d with third-row seating. The LS trim, meanwhile, didn’t make it into the ’09 lineup.
A comprehensive update took place for the ’10 model year. The redesign brought a much larger grille — some might even call it aggressive. The V-6 received a bump in output to 230 and 215 lb-ft of torque. And the Rockford Fosgate audio system’s wattage was pushed up to 710. 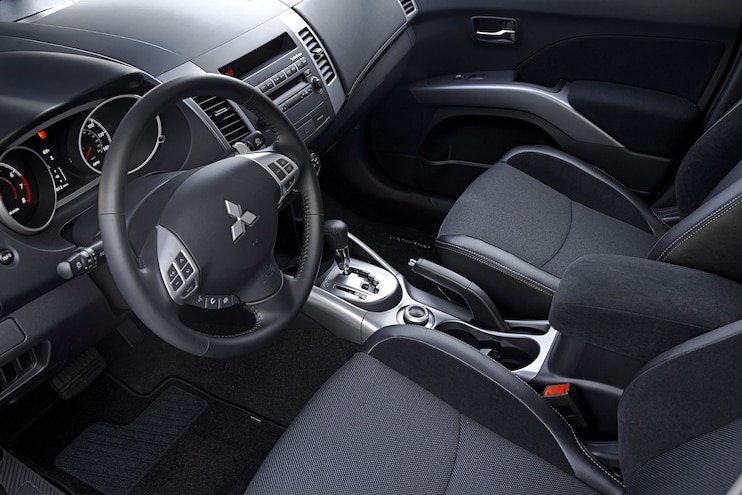 View Photo Gallery | 6 Photos
Photo 6/6   |   Outlander Se Interior
This year also saw a new trim level come in at the top of the range, the GT, which enjoys a more sophisticated all-wheel-drive system (called S-AWC, with tarmac, snow, and lock settings, plus an active front differential and hill start assist) as standard, as well as all the previously mentioned options, along with rain-sensing wipers, satellite radio, more exterior brightwork, and aluminum-covered pedals.
A rearview camera became available in ’11, which was when the XLS became front-drive only, while all-wheel drive was optional in the SE. Any version with all-wheel drive also had heated mirrors.
In ’12, the rearview camera monitor migrated to a spot in the rearview mirror. Trim levels were pared down to ES, SE and GT. The final model year saw every Outlander gain heated mirrors, and heated seats became part of the SE’s standard equipment. Rear parking sensors were now optional.
The Outlander was underrated as a new vehicle and therefore not a big player in the pre-owned market, but that can be a positive thing in terms of paying a reasonable price. Valuing a hypothetical ’12 SE version with all-wheel drive, about 70,000 miles on the odometer, in good condition, and bought from a private party brings up a figure of $10,012. Bought from a dealer, it could be $12,213. A comparable Hyundai Santa Fe might cost $11,974 or $14,742 respectively.