For most horsepower junkies, adding more and more performance parts is an easy practice. Brandon Ward of Summers County, West Virginia, started with a different strategy than most and took pause after the “basic programmer” stage of upgrading. Brandon knew the 6.7L Cummins engine is a potent platform, so he only made changes that were absolutely necessary to support about 800 hp. Little did he know at the time that his ’12 Ram 2500’s engine would end up making a bunch more than that. 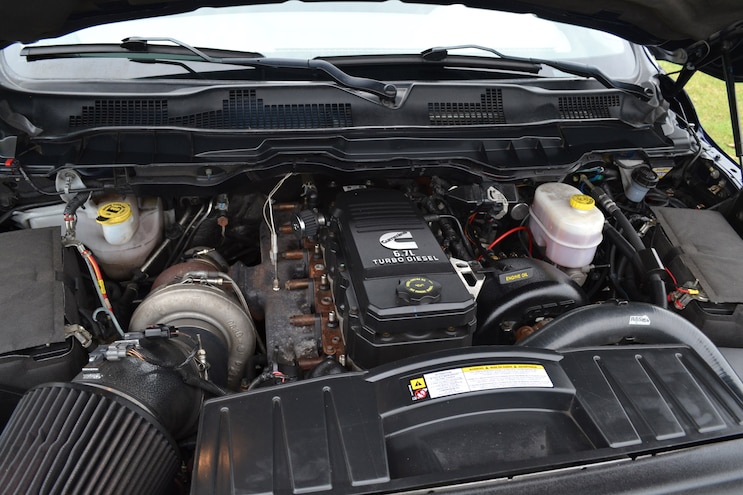 View Photo Gallery | 23 Photos
Photo 2/23   |   It's no surprise that the engine bay in Brandon’s ’12 Ram 2500 is just as clean as the exterior. Although it isn't exactly a sleeper with the big single turbocharger and twin CP3 injection pumps, not many folks will guess the 6.7L Cummins engine cranks out 943 hp, along with 1,783 lb-ft of torque.
Given the questionable horsepower-handling capability of the 68RFE six-speed automatic transmission, Brandon took a different route and ordered his Ram with a G56 six-speed manual gearbox. Although the transmission was stock, Brandon knew he needed to upgrade the clutch to South Bend Clutch’s 3650 dual-disc unit. He also knew the engine needed rpm help, so he replaced the stock valvesprings and pushrods with 4,000-rpm-safe pieces from Hamilton Cams. The cylinder head is sealed with the block by heavy-clamping ARP 625 studs to prevent the head gasket from making an early exit. 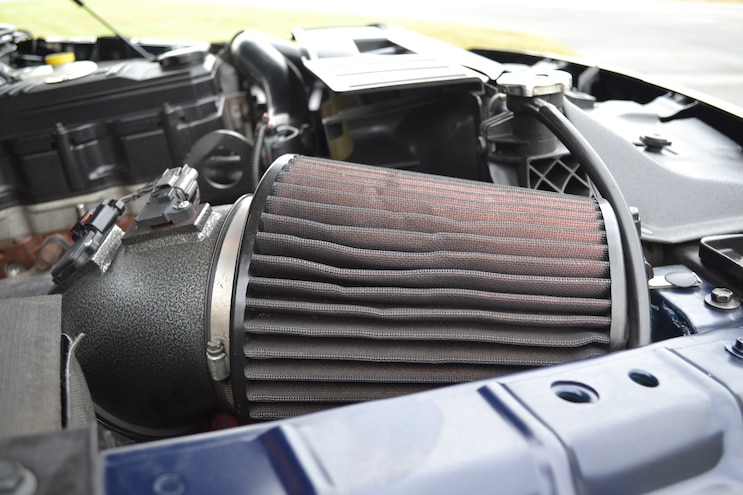 View Photo Gallery | 23 Photos
Photo 3/23   |   A conical air filter is part of a Source Automotive second-generation swap kit, and it just narrowly fits behind the truck's radiator support.
After Brandon upgraded the engine and clutch, he turned his focus to making more power. He already had an old H&S Performance programmer but went a step further by adding custom tunes from Hardway Performance. The fuel system was revamped with an AirDog 165-gph lift pump and a twin CP3 injection-pump kit from ATS Diesel Performance that supports 1,200 hp. The big exclamation point for the fuel system is the enormous 250-percent-over S&S Diesel Motorsport injectors, which provide all the fuel the Cummins in Brandon’s Ram needs. Airflow through the engine was upgraded, too, with a Source Automotive intake and a 72mm BorgWarner S400 turbocharger with an 83mm turbine and a tight 0.90 A/R exhaust housing that works well with the manual transmission. Exhaust is expelled through a 5-inch Flo-Pro exhaust.
In his mission to make more power, Brandon also took time to make cosmetic changes to his Ram. The first step was elevation and ride, as Brandon selected a BDS Suspension long-arm 6-inch lift kit to raise the truck. Fox coilover shocks in the front and Fox 2.0 shocks in the rear complement the lift. The stock wheels and tires got the heave-ho, replaced by 22-inch American Force wheels with Toyo Open Country M/T tires. We asked Brandon about the paint, but he says they are factory colors, and he just selected the proper options to go along with the stock color scheme.
When it was time for Brandon to find out what type of performance his hopped-up Ram really has, he decided to hit a local dyno for the all-important horsepower and torque numbers. To his surprise, the Ram posted 887 hp (with 63 manic psi of boost), and an outrageous 943 hp with water-methanol turned on. The 6.7L Cummins’ torque was an outstanding 1,783 lb-ft, all twisting through the G56 transmission. 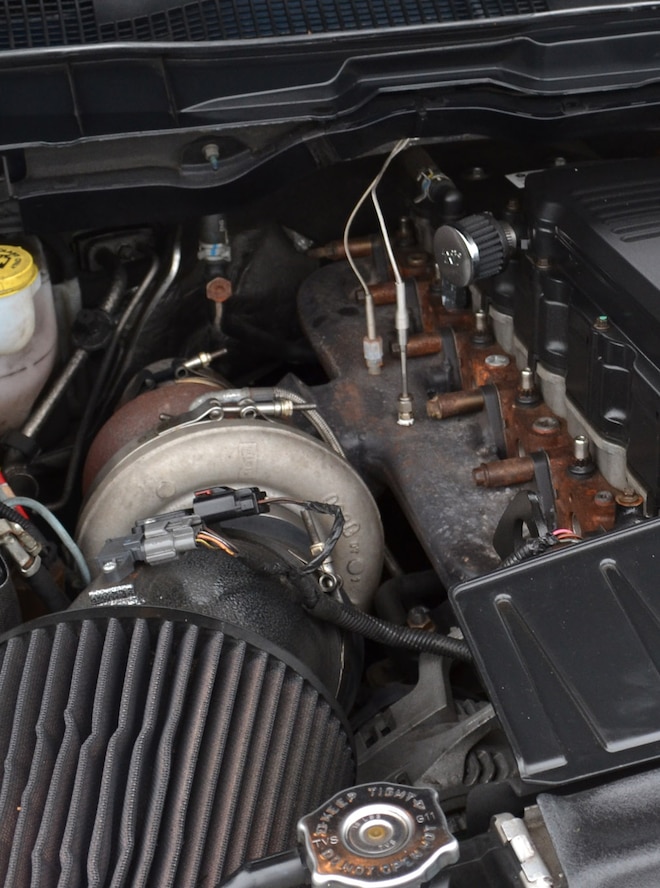 View Photo Gallery | 23 Photos
Photo 4/23   |   Big boost is on tap thanks to a quick-spooling 72mm BorgWarner S400 turbo. Drive pressure is kept to a minimum thanks to a Steed Speed exhaust manifold with a T4 exhaust flange.
As one of the cleanest trucks around with jaw-dropping dyno sheets, Brandon’s Ram is a perfect example how a few choice modifications can turn a stocker into a monster. 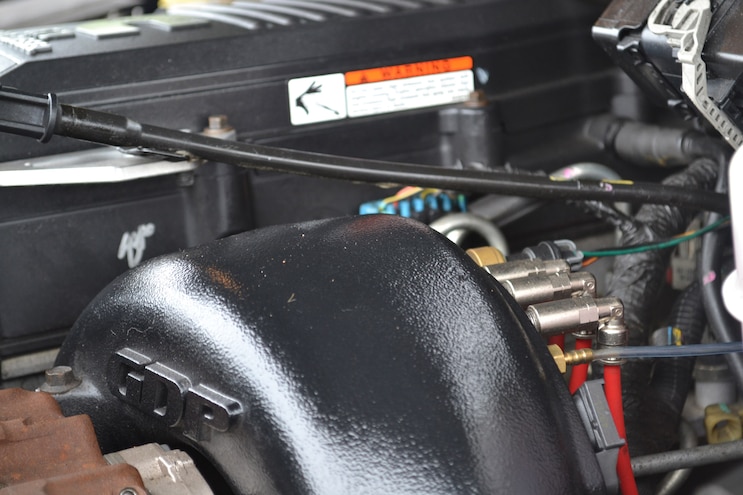 View Photo Gallery | 23 Photos
Photo 5/23   |   Airflow into the cylinder head is smoothed by a high-flowing intake horn from Glacier Diesel Power. Also visible are three nozzles for the Snow Performance water-methanol injection system, which adds an impressive 56 hp to the stout engine package. 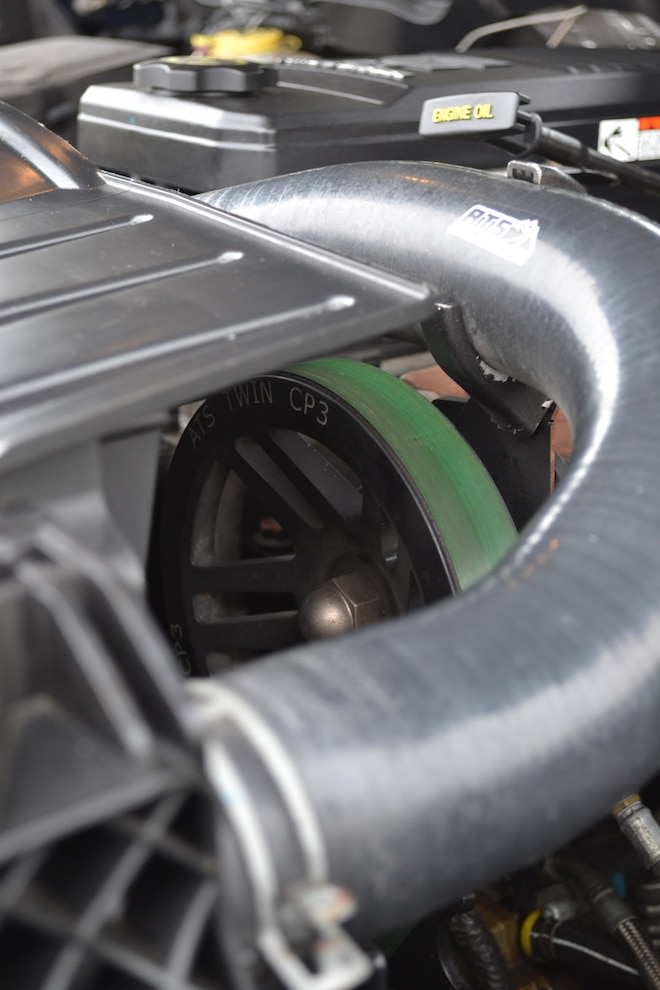 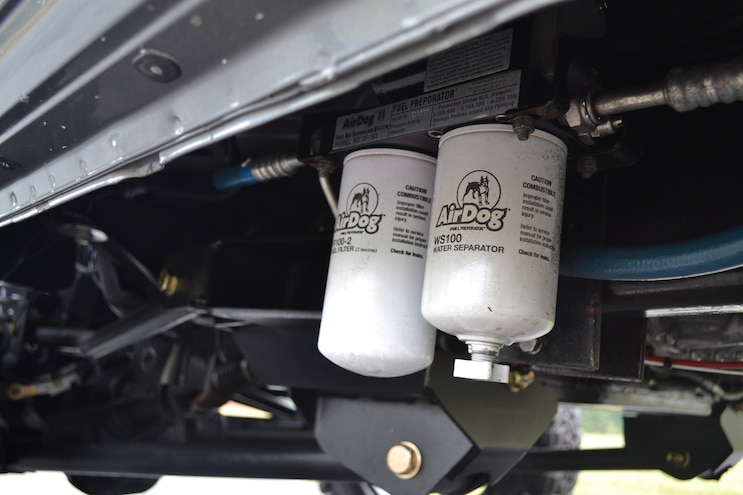 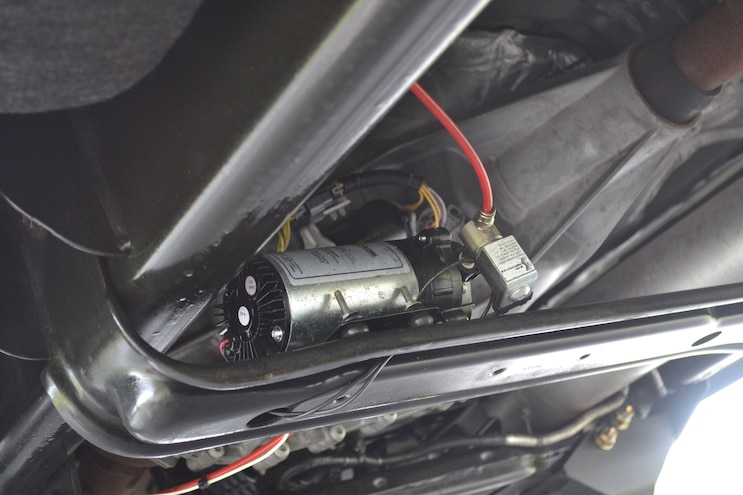 View Photo Gallery | 23 Photos
Photo 8/23   |   With the engine bay packed with twin pumps and turbo hardware, Brandon mounted the pump for the Snow Performance water-methanol injection system in a unique place: bolted to a crossmember at the rear of the transmission. It's down and out of the way. 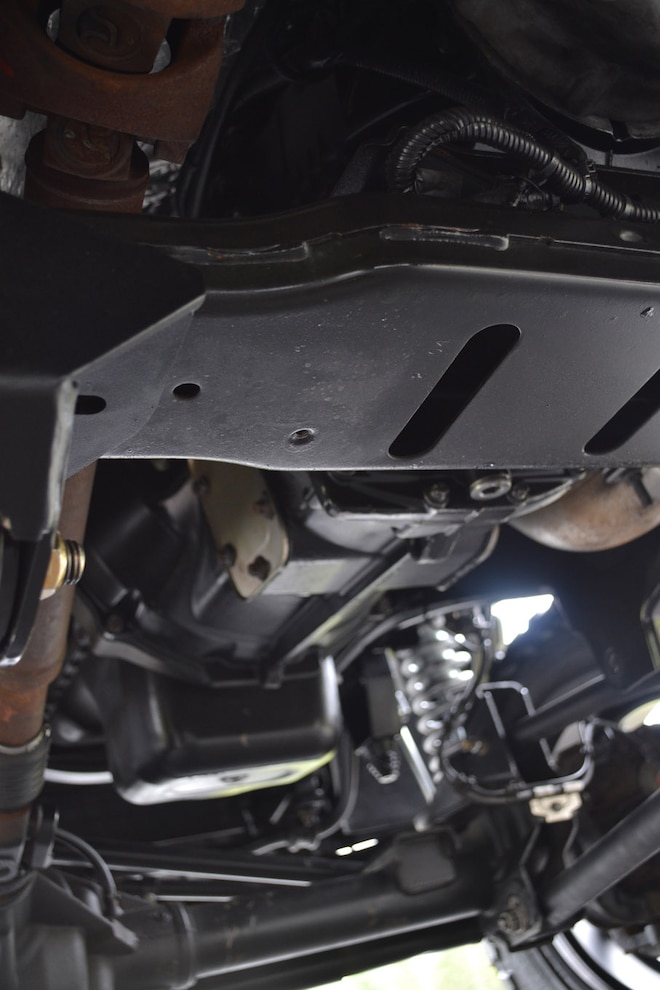 View Photo Gallery | 23 Photos
Photo 9/23   |   The stock G56 six-speed manual transmission is pushed to its limits by more than 900 hp, and Brandon reports he's already had to fix it once. Power is transferred from the engine to the rear wheels by a South Bend twin-disc clutch. 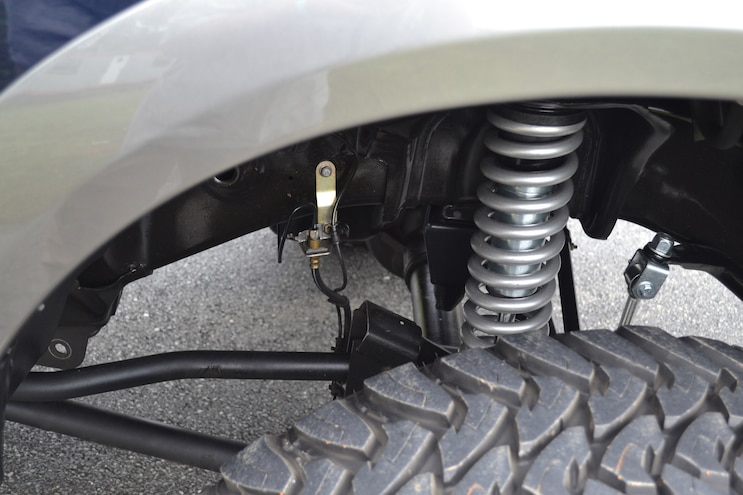 View Photo Gallery | 23 Photos
Photo 10/23   |   The Ram's front suspension has springs that are color-matched to the fenders, and it sits a good 6 inches higher than stock, thanks to a lift kit from BDS Suspension. 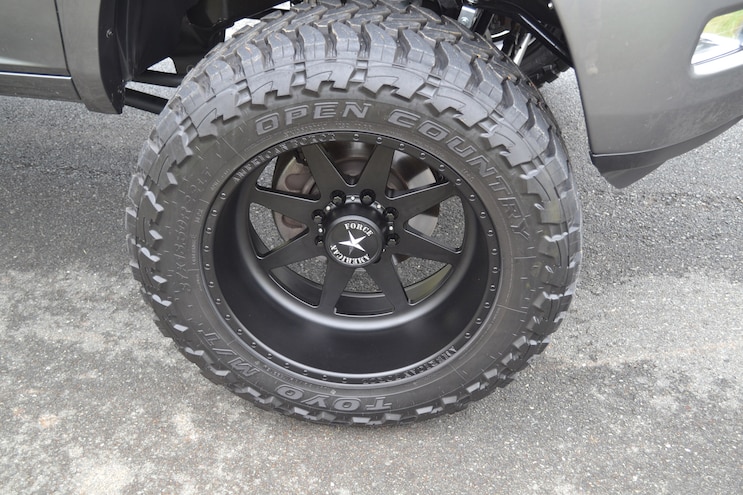 View Photo Gallery | 23 Photos
Photo 11/23   |   In keeping with the clean monochrome theme of the truck, the Ram rolls on a set of 22x12 American Force Independence wheels. 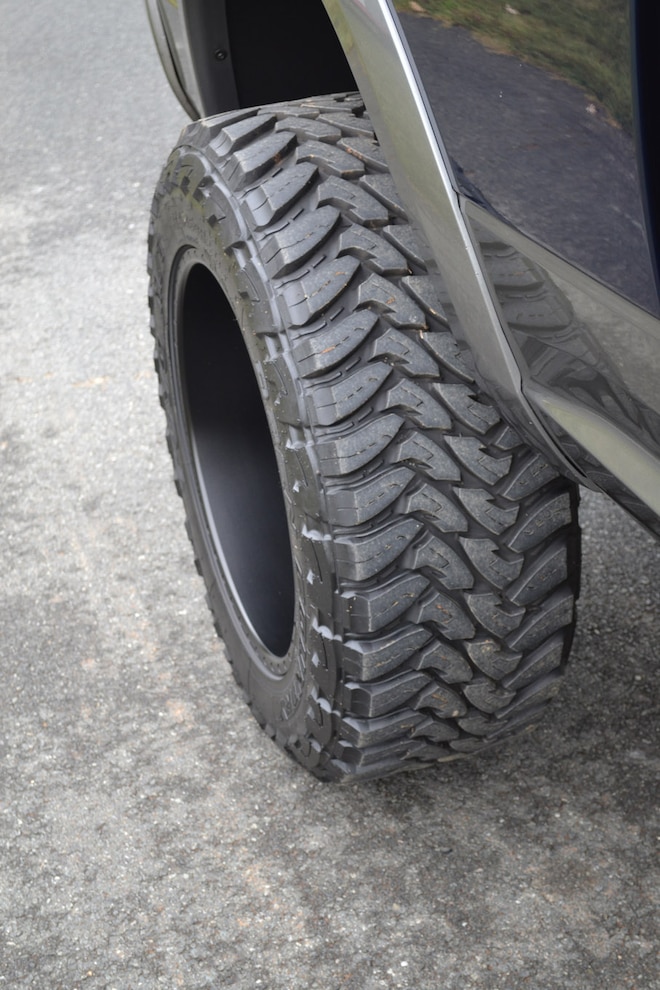 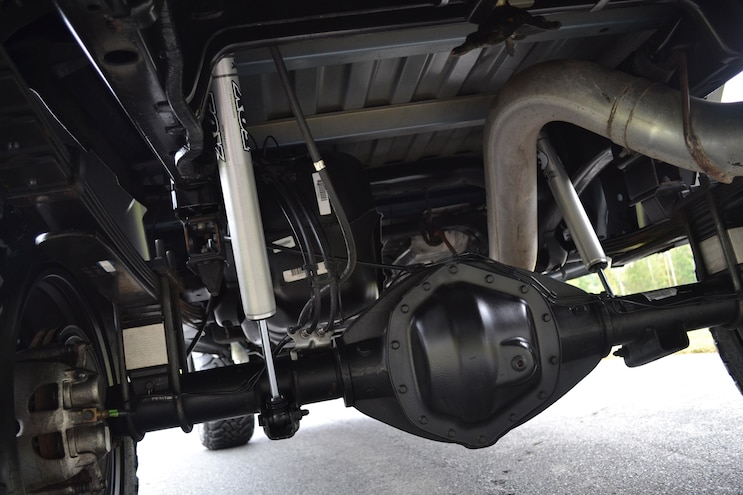 View Photo Gallery | 23 Photos
Photo 13/23   |   The underside of the Ram is nearly as clean as the outside of the truck, which seems nearly impossible. The suspension is fitted with shocks from Fox Racing, which provide excellent damping. 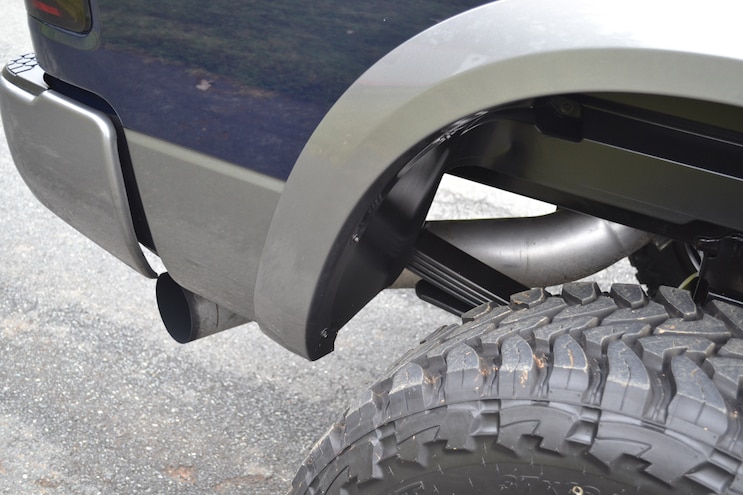 View Photo Gallery | 23 Photos
Photo 14/23   |   Brandon is one of the few truck owners who didn't select an exhaust tip for his 4-inch Flo-Pro exhaust. “I'm just not really a fan of them,” Brandon admits. 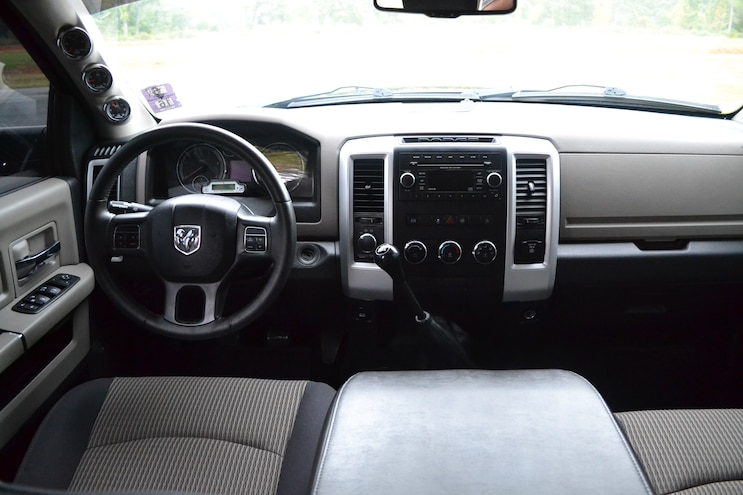 View Photo Gallery | 23 Photos
Photo 15/23   |   Much of the interior is stock, but it's in excellent condition. There are only a few visual cues (like the water-methanol injection monitor) that hint at the truck’s overall potential. 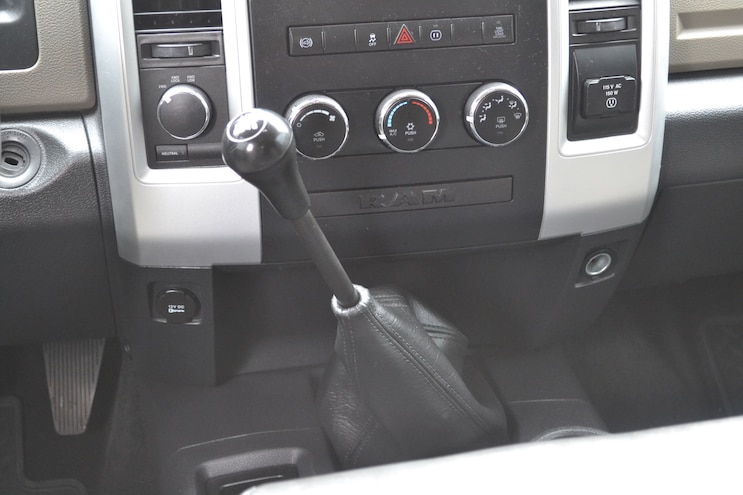 View Photo Gallery | 23 Photos
Photo 16/23   |   One of the items that sets this Ram apart from the rest is the big shifter coming out of the floorboard. Brandon says the manual transmission is a bit of a pain at the dragstrip, but the truck really pulls at highway speeds. 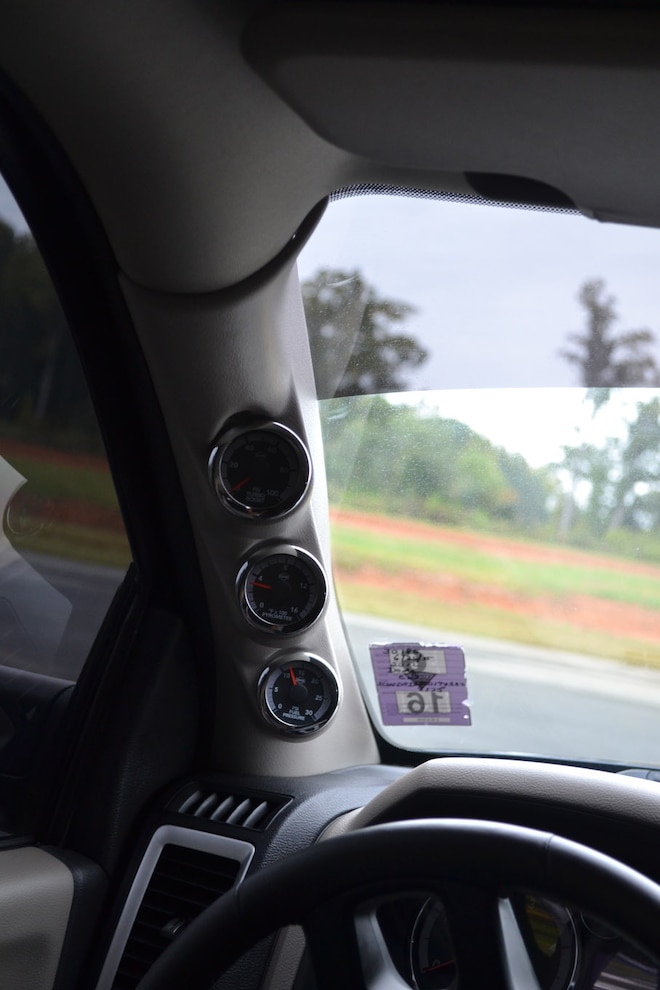 View Photo Gallery | 23 Photos
Photo 17/23   |   Brandon keeps an eye on boost, EGT, and fuel pressure through AutoMeter gauges that are mounted on the truck's A-pillar. 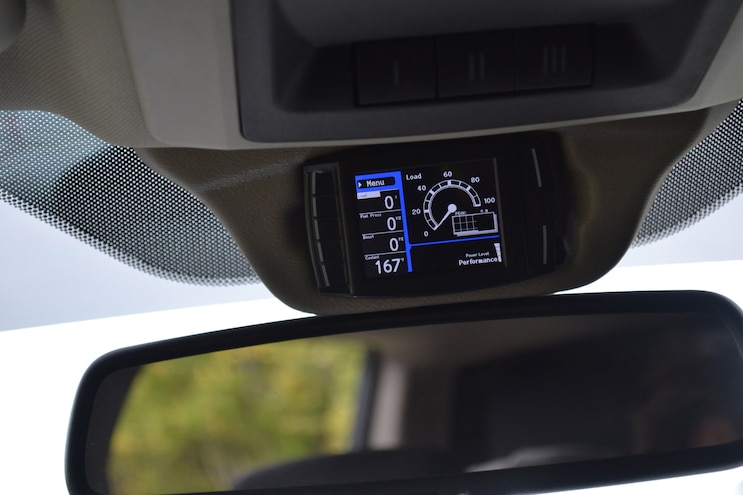