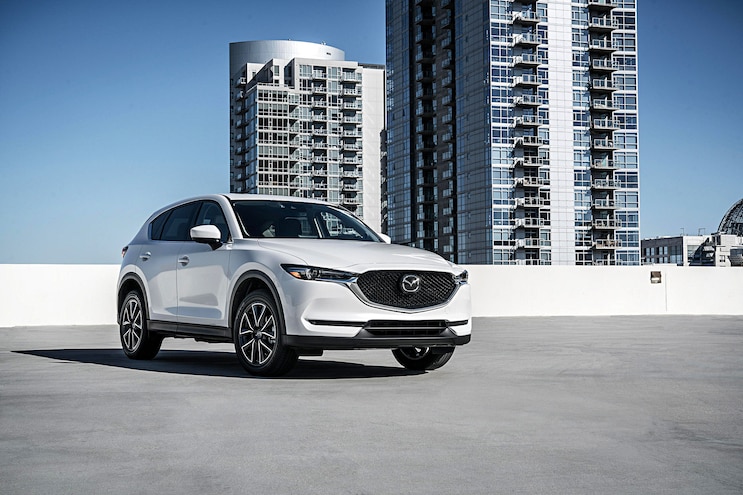 When we reviewed Mazda's all-new ’16 CX-9 three-row SUV last year, we reported that this appealing Japanese brand was moving from mainstream to near-premium with each new vehicle, competing with Toyota, Nissan, Honda, Chevy, Ford, Hyundai, and Kia with quieter, more premium interiors complimenting their winning looks and personalities. And this new ’17 CX-5 compact SUV continues that trend with a cornucopia of new features and nearly 700 improvements, large and small, over its popular predecessor.
Like its CX-9 big brother, this athletically proportioned new CX-5 stands out in a blossoming segment full of mostly bland or overly aggressive looks. The same holds true inside its cabin, where an abundance of carefully crafted premium-look, soft-touch materials elevate it above most competitors. 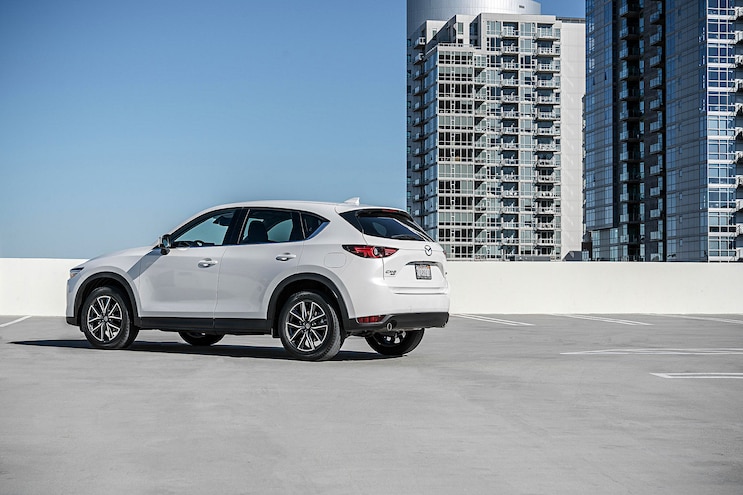 View Photo Gallery | 9 Photos
Photo 2/9   |   2017 Mazda Cx5 First Drive
Its performance is eager enough to earn Mazda continued Zoom-Zoom status, at least when lightly loaded on level roads, with its standard 2.5L SKYACTIVE-G I-4 pushing 187 hp and 185 lb-ft of torque through its six-speed SKYACTIV-DRIVE automatic transmission. Peak torque arrives at a mid-range 3,250 rpm with front-wheel drive or at 4,000 rpm with i-ACTIV (yes, they name everything) predictive all-wheel drive, which redirects up to half of it to the rear wheels to maintain traction in slick conditions. Its EPA economy impresses at 24 mpg city, 31 highway, and 27 combined with FWD (one mpg less with AWD). And Mazda promises a 2.2L SKYACTIV-D diesel engine option later in 2017.
In addition to its 15 percent stiffer body and chassis, hundreds of new features and improvements include windshield pillars moved rearward for better visibility, a windshield-projected Active Driving head-up display, two-stage reclining second-row seats, standard heated front seats, available heated outboard rear seats, available heated steering wheel, two front and two rear USB ports, standard rearview camera, available power liftgate, and 10-speaker Bose surround sound and Mazda Connect infotainment (featuring a 7-inch touchscreen and a console-mounted twirl/poke multi-function control like those in German cars). This rare combination is welcome, but not the fact that the touchscreen works only at rest. Mazda's lawyers apparently believe that the twirl/poke wheel is less distracting while driving than simply touching on on-screen icon, but we find it exactly the opposite. 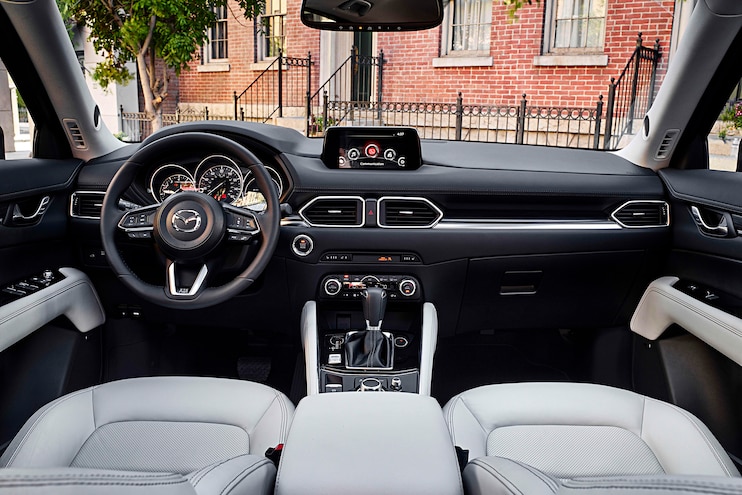 View Photo Gallery | 9 Photos
Photo 3/9   |   2017 Mazda Cx5 First Drive Interior
The CX-5’s i-ACTIVSENSE safety suite includes such new features as full-speed Mazda Radar Cruise Control (MRCC) that, along with Distance Recognition Support, uses a front-facing camera to move at speeds below 18 mph and radar at faster speeds to maintain distance from vehicles in front. Working with Lane Departure Warning, Lane Keep Assist gently nudges you back into your lane should you begin to stray, and Traffic Sign Recognition keeps you informed of posted speeds and warnings.
One other driver-assist is standard G-Vectoring Control. Reacting to throttle input, steering angle, and other sensors, it adds a tiny amount of engine braking by backing off ignition spark entering corners, improving both steering stability and turn-in response. And the worse the traction conditions, the better this industry-first technology works, Mazda says. 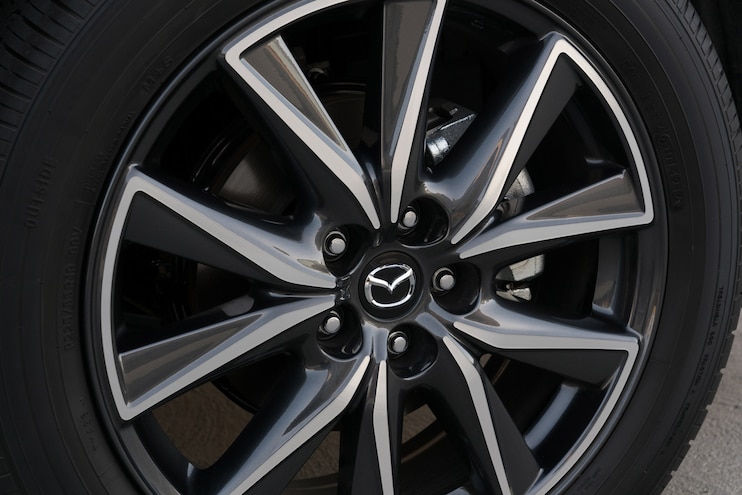 View Photo Gallery | 9 Photos
Photo 4/9   |   2017 Mazda Cx5 First Drive Wheel
We found the new CX-5's handling athletic, its steering responsive, its brakes sure and strong, and its cabin quieter than the previous model's. It's no sports car, but it acquits itself well when driven more aggressively than most owners ever will—typical for a modern Mazda.
The previous CX-5 was already Mazda's best-selling model, and depending on one's tastes and compact-crossover priorities, this new ’17 iteration is as appealing to look at, as satisfying to occupy, and more engaging to drive than almost any other crossover out there. It should go a long way toward bringing more eager buyers into Mazda stores, particularly given its reasonable starting prices between $24,000 and $33,000.