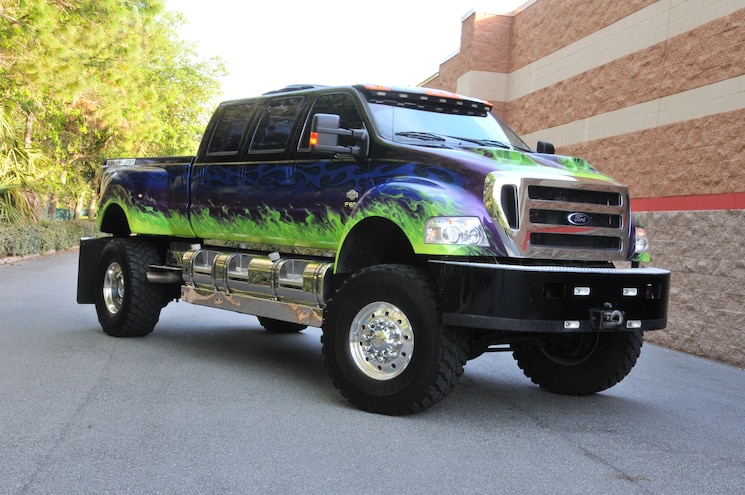 Joe Dipola of St. Cloud, Florida, is a general contractor, building homes and commercial properties in central Florida. One of the necessities of the job is a truck that can handle heavy loads, tow Joe’s huge, double-axle trailer, and transport his crew to the job site. Obviously, there are lots of commercial vehicles qualify, but Joe smiles when he says he’s an impulse buyer.
While many of us might buy a candy bar or shirt on impulse, Joe demonstrated his awesome allegiance to big trucks by purchasing this huge six-door Ford, a strong and sturdy ride capable of hard work but with a definite custom side. Built by Super Truck in Augusta, Georgia, Joe’s ’07 Ford F-650 has a new, longer chassis and a new rear cab section. It’s almost as long as your average Greyhound bus—but lots more fun to drive and loaded with a long list of genuinely functional upgrades. View Photo Gallery | 65 Photos
Photo 2/65   |   Striking from any angle, the front end of this truck emphasizes its sheer size and power. F-150 headlights were molded into the front fenders, custom fiberglass “snouts” were added to the hood, and a slim visor covers the cab. Polished aluminum saddle tanks give the truck an additional 150 gallons, while dual batteries ensure plenty of starting power.
One of the more unusual features is the bed, fitted with a track mechanism that lets it slide like a rollback, coupled with a lift mechanism that lowers it squarely to the ground. It becomes the perfect motorcycle or ATV hauler, and loading is effortless, controlled by a handheld remote. Suspension upgrades on the truck include Bilstein dual-action shocks, Eaton sway bars, and a pair of 18-wheeler airbags on the rear axle that raise or lower the truck when it’s time to connect with the trailer. The polished 22.5-inch Alcoa wheels use Michelin XZL 445/65R22.5 tires that are rated for concrete trucks. Joe points out that they are balanced with a set of free rolling beads inside the tire, and he says the truck rides like a dream: as stable and as easy to handle as a much smaller vehicle. The polished aluminum saddle tanks on both sides hold 75 gallons each, so along with the stock 35-gallon tank, Joe probably has enough range to drive cross-country with maybe just a quick fill-up in Kansas. Joe smiles when he says, “It takes a second mortgage to fill those tanks!” The 350hp Caterpillar engine benefits from upgraded turbo boost and a custom 3.5-inch Flowmaster exhaust. It’s mated to a six-speed Allison automatic transmission. 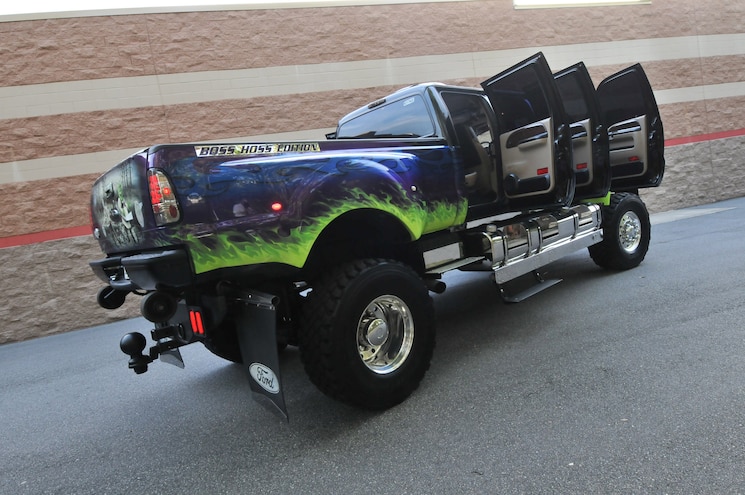 View Photo Gallery | 65 Photos
Photo 3/65   |   The F-650 rides about 15 inches higher than stock, a combination of suspension changes and those 22.5-inch Alcoa wheels holding Michelin XZL 445/65R22.5 concrete truck tires. Airbags at the rear drop the truck 6 inches to help with connecting the double-axle construction trailer. Green realistic fire wraps completely around the lower portion of the truck.
While the truck has its functional side, the fun side is equally as important. Joe met with nationally known airbrush artist, Chris Cruz, many years ago when Chris applied murals to Joe’s bike. It was natural for Joe to have Chris add his artistic talents to the truck, although we’re sure that at first glance, Chris wasn’t certain he’d have enough paint! Traditional light blue tribal flames flow across the dark blue midsection of the truck, while the lower portions of the vehicle now sport licks of realistic fire in multiple shades of green.
Chris added a mural on the tailgate, a memorial to Joe’s dad and young son. Unique body mods up front include a custom hood with a pair of twin fiberglass snouts molded in, a minimalist visor, and a pair of F-150 headlights. The King Ranch and Boss Hoss emblems on the side are just for fun. The massive front bumper, accented with diamond-plate, holds auxiliary lights along with the 15,000-pound Warn winch, typically used to get other truckers out of a jam. 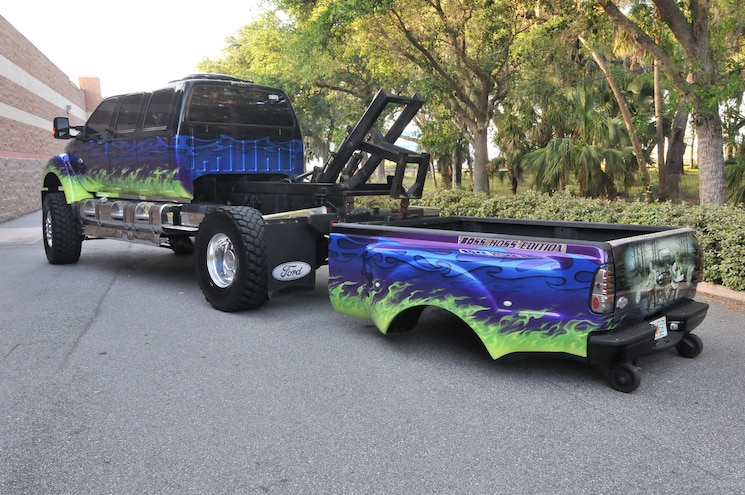 View Photo Gallery | 65 Photos
Photo 4/65   |   The Rhino-lined bed is a mechanical masterpiece. Operated by remote, it slides to the rear and down like a rollback. Then a 7,000-pound-capacity lifting arm lowers it to the ground. Drop the tailgate and you can drive your motorcycle or ATV in with no difficulty. A combination of electric and hydraulic mechanisms gets the job done. 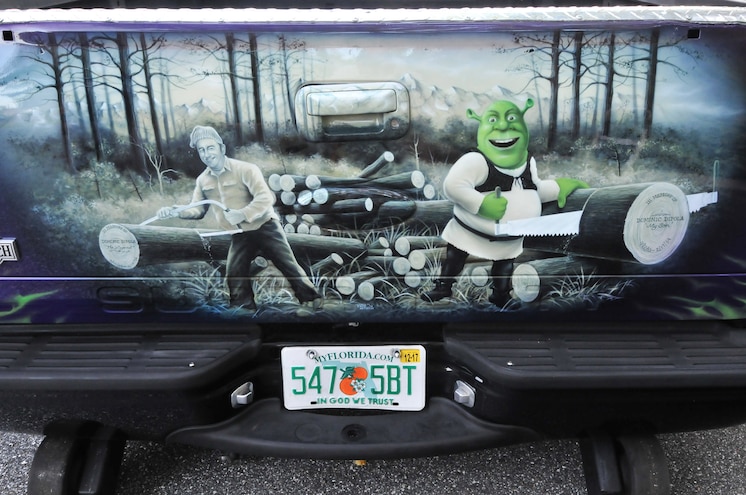 View Photo Gallery | 65 Photos
Photo 5/65   |   The unique mural on the tailgate is a memorial to both Joe’s father and young son. Joe always enjoyed the Shrek movie series and had Chris Cruz incorporate the cartoon character into the tribute.
The crew loves getting to the job site, pampered inside the truck’s luxurious interior. The first things you notice are the crocodile inserts in the four aftermarket Eldorado buckets and the rear bench. Joe had already seen ostrich, alligator, and bovine-draped interiors, but he wanted something different. He had the seats upholstered one at a time so his hardworking truck could stay on the job! 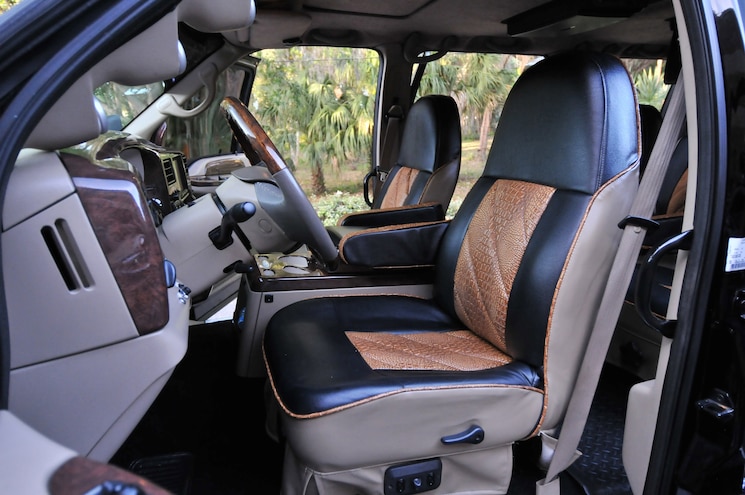 View Photo Gallery | 65 Photos
Photo 6/65   |   Four bucket seats and a rear bench seat mean seven (and sometimes eight!) people can be on board, riding in plush comfort. With the elaborate audiovisual system (multiple subs, mids, highs, and monitors) and coolers between the seats, it might be hard to coax the crew out in the morning.
In addition to the comfortable seating and rich burl wood accents throughout, the cab is loaded with stereo, beginning with a Pioneer AVIC-Z1 in-dash, multimedia navigation receiver. It controls a collection of JL Audio 6.5-inch component sets in all six doors, four 10-inch subs behind the rear seat, and a pair of NESA 14-inch ceiling-mount 1080P monitors. Multiple JL Audio amps reside under the rear seat. Although the third row is definitely the fun row, sporting wireless headphones for gaming, the custom consoles between the first and second row buckets are equipped with refrigerators, making sure everyone has fun during road trips. 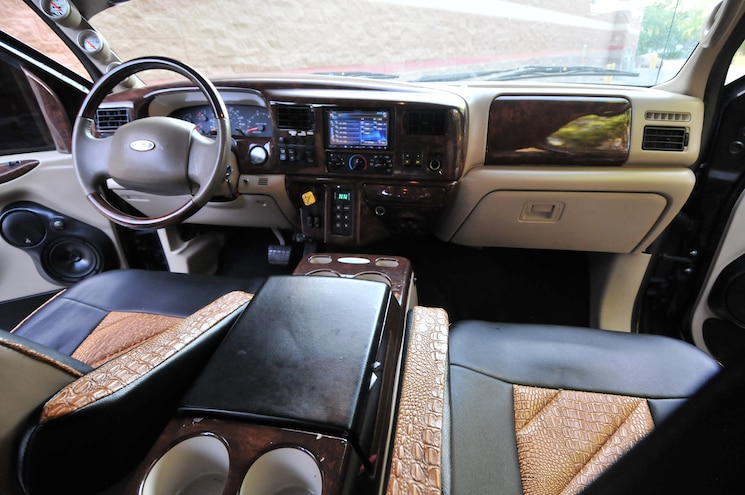 View Photo Gallery | 65 Photos
Photo 7/65   |   Show N Tow 2007 Ford F650 Interior
Although the truck looks like it spends its days pampered on the show circuit, Joe put 30,000 miles on it last year. “I drive it every day, and it’s usually hooked up to my double-axle trailer, carrying supplies to the job site.” One look at this rolling work of art, and we can put to rest the notion that says you can’t bring home trophies with your work truck. In fact, the custom bed on this heavy hauler will certainly make loading them easier! 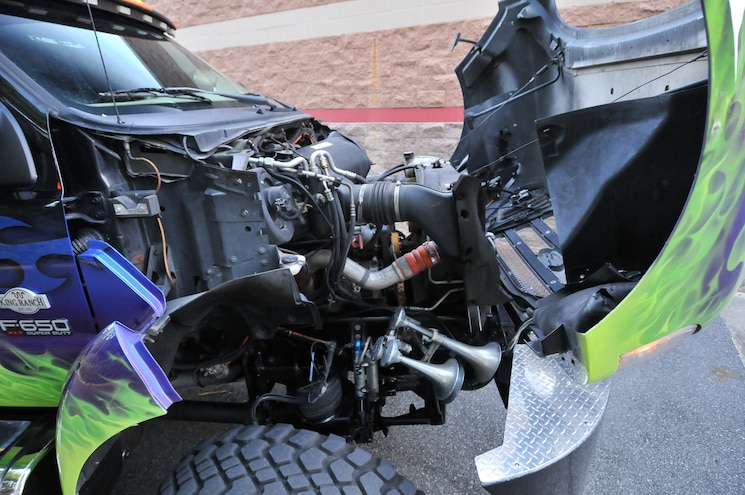 View Photo Gallery | 65 Photos
Photo 8/65   |   Clean and sanitary, the 350hp Caterpillar engine is already a brute but benefits from smaller pulleys that provide additional turbo boost. A 3.5-inch Flowmaster exhaust creates a performance rumble appropriate for a truck of this size. The engine is mated to a six-speed Allison transmission with gauges on the A-pillar that keep track of underhood activity.