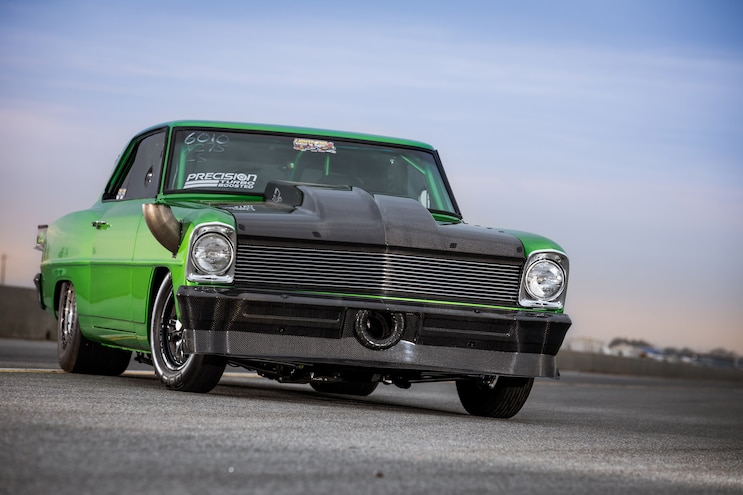 Drag racing—the “straight-line hustle”—is currently one of the hottest segments of the diesel-performance hobby, thanks in large part to the efforts of the Outlaw Diesel Super Series and the National Hot Rod Diesel Association, the scene’s two major racing sanctions. At ODSS and NHRDA, serious torque and horsepower take center stage, pushing large, blocky pickups to low elapsed times (single digits in many cases) on quarter- and eighth-mile dragstrips.
When it comes to the really quick diesel trucks (4,500-pound beasts that run 5.30-second eighth-mile e.t.’s), one of the more prominent names in the conversation is Ryan Milliken, the main man at Hardway Performance Solutions in Mary Esther, Florida. The championship-winning racer has dominated categories and crushed records with an assortment of brutally fast, Cummins-powered rigs. However, while Ryan’s racing credentials are more than official, his latest creation has sparked a huge amount of buzz and excitement among diesel enthusiasts and, wait for it, muscle car fans throughout the U.S. 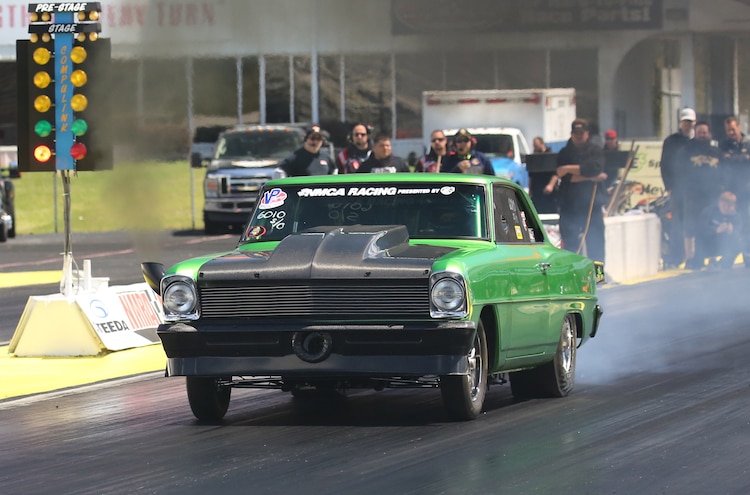 View Photo Gallery | 13 Photos
Photo 2/13   |   As of this writing, the Nova’s best eighth-mile performance is 4.88 seconds at 150 mph. Depending on the rear tire he chooses (275 drag radial or 28x10.5 slick), Ryan can race almost every weekend in X275 or No Prep competitions throughout the U.S.
After spending two years racing in the Outlaw Diesel Super Series Pro Street eliminator with his notorious black ’14 Ram 1500 (a truck that ran a best e.t. and mph of 5.29/136 in the eighth-mile), Ryan left the big rig life for a chance to drive the brightly hued ’66 Chevrolet Nova you see here.
“My dad’s favorite car was ’66 Nova, and he passed away in 2012,” says Ryan as he reflects on how his decision to buy the Nova came to be. “I wanted a universal race car. The diesel races are fun, but they are only 10 times a year and I was doing it with the same truck. With the Nova, I can run nearly every weekend in a variety of drag races.”

View Photo Gallery | 13 Photos
Photo 3/13   |   With a 6.8L Cummins diesel engine under the hood, Ryan Milliken’s ’66 Nova definitely has one of the most unique powerplants in the world of X275 heads-up drag racing (a popular category that requires all vehicles be equipped with 275/60R15 drag-radial tires). The class is dominated by small-block and big-block engines that burn either high-octane racing fuel or alcohol.
The build was surprisingly quick and much easier than anticipated. “The engine bolted between the framerails with relative ease,” Ryan says. Hardway built custom motor mounts and a set of “bat wings” to secure the 6.8L Cummins engine in place. The rest of the car came prepared for drag racing thanks to an SFI 25.2-spec chassis and race-bred leaf spring suspension system. And the coolest aspect of the combination is that Ryan runs the Nova exclusively on small rear tires—either a pair of 28x10.5 Mickey Thompson slicks or ET Radial Pro 275 DOT tires.
While the engine is commonly recognized as a Cummins, Ryan prefers to call it a Freedom Racing Engines powerplant. The block and aluminum cylinder head are solid, so no water flows through them. Engines in Ryan’s Super Street and Pro Street trucks had coolant running through the block and cylinder head, which led him to design a special coolant-control system to help keep the engines together. Based on Ryan’s calculations, with 65 psi of boost from an 88mm Garrett GTX5533 Gen II turbocharger and a 700hp, three-stage fog of nitrous oxide, the 6.8L engine combination produces 1,900 hp. 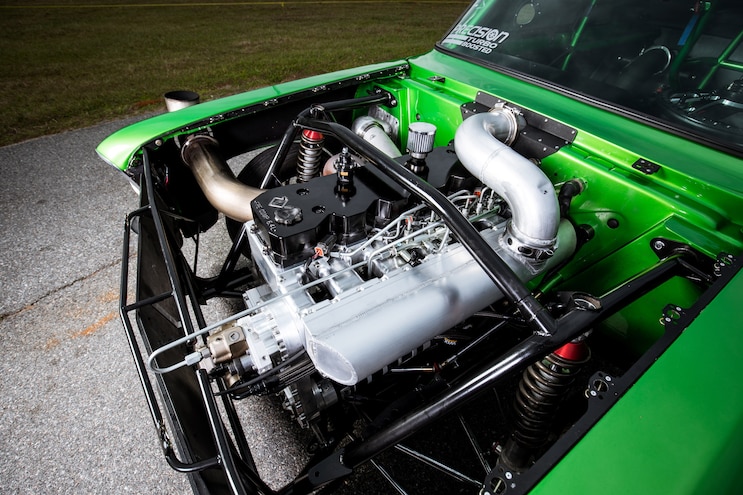 View Photo Gallery | 13 Photos
Photo 4/13   |   Freedom Racing Engines is responsible for the 6.8L powerplant, which features a solid engine block and cylinder head. With nitrous oxide, the beast produces roughly 1,900 hp, and on fuel only, Ryan says it cranks out 1,450 hp.
The Nova is equipped with a SunCoast Diesel Transmissions–built TH400 automatic transmission that is designed as a two-speed rather than the more typical three-speed. SunCoast also built a diesel-specific torque converter with extremely low stall speed. Drag-racing a muscle car with that kind of power and low engine speed is unique, mostly due to the short back tires and the anticipated 150-mph speed Ryan is shooting for in the eighth-mile. The Ford 9-inch rear housing currently holds a 2.91:1 gear ratio, but a switch to 2.73:1 gears is in order. Sourcing pro-style gears in those ratios has proven difficult, as companies stopped making them more than a decade ago, so Ryan scours Internet forums, swap meets, and race car garage sales to find the hardened ring-and-pinion sets for the high-speed/short-tire combination.
Eight weeks after securing the new-to-him rolling chassis and installing the latest 6.8L powerplant, the Nova came to life for the Lights Out 8 event in February 2017. Ryan was entered in two categories—the world-famous X275 Class and the ultra-cool Leaf Spring Shootout. Working the bugs out of the new combination, the team walked away with a best performance of 5.15 seconds at 145 mph.
The racing didn’t stop after the Lights Out 8 adventure; in a matter of weeks, Ryan attended several more competitions and, in early April, he moved closer to his goal of making 4.70s. It was during the 9th annual NMRA/NMCA All-Star Nationals, held at Atlanta Dragway, that the Nova’s best elapsed time dropped to a stout 4.88 seconds at 150 mph! He was entered in the ultra-fast category known as Street Outlaw, and the diesel-powered Nova held its own in qualifying but ultimately lost in the opening round of competition. 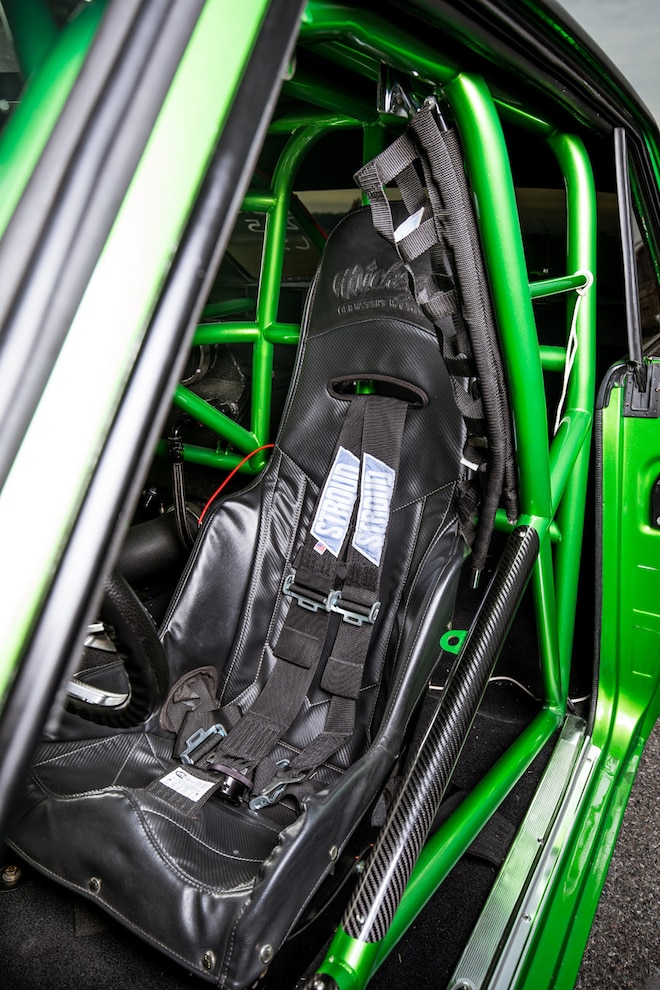 View Photo Gallery | 13 Photos
Photo 5/13   |   A lightweight seat, five-point harness, and SFI 25.2-spec rollcage protect Ryan from the unexpected.
The path from racing a class-specific, modified street truck to competing in a radial-tired race car that is capable of battling in an assortment of categories now allows Ryan to satisfy his drag-racing desires in a vehicle that was so dear to his father’s passion for muscle cars. 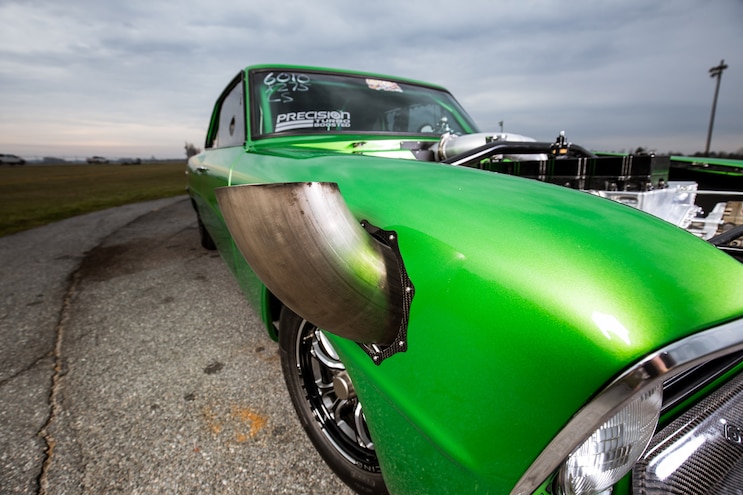 View Photo Gallery | 13 Photos
Photo 6/13   |   A single, 5-inch fender-exit dump pipe is quite the spectacle at the races. Unsuspecting track workers and crew chiefs often get lost in the cloud of smoke. 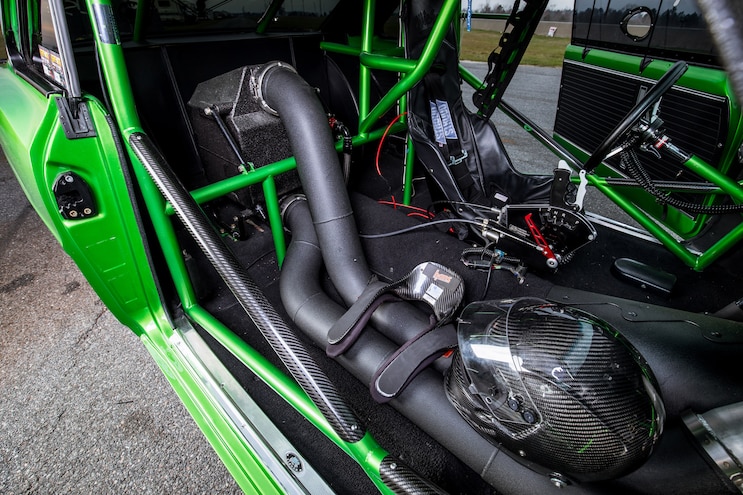 View Photo Gallery | 13 Photos
Photo 7/13   |   An air-to-water intercooler is mounted inside the cabin for two reasons. The first is weight distribution. With a nose-heavy combination like this one, X275 racers prefer to keep the weight toward the back of the car. The other reason is ease of mounting such a large ’cooler. 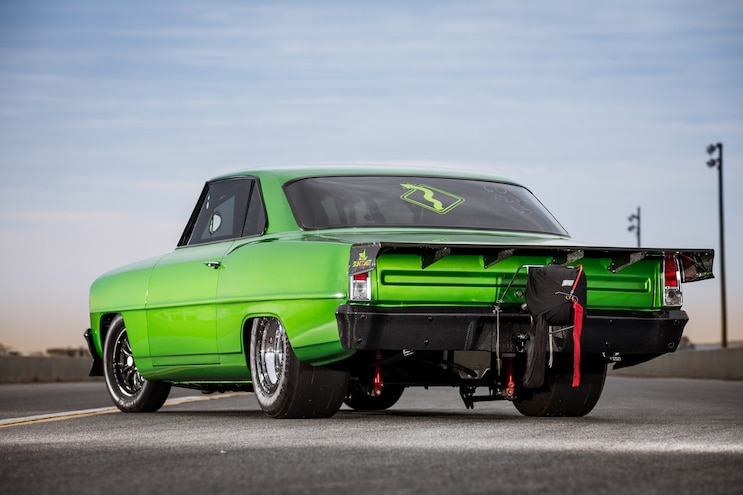 View Photo Gallery | 13 Photos
Photo 8/13   |   The rear suspension is comprised of CalTracs traction bars, which help the leaf springs plant the tires. Also critical to the sub–1.30-second 60-foot times are Santuff double-adjustable shocks. A Bosch Motorsports ECM manages the engine functions and also allows Ryan to control the amount of power being applied to the relatively small tires out back. 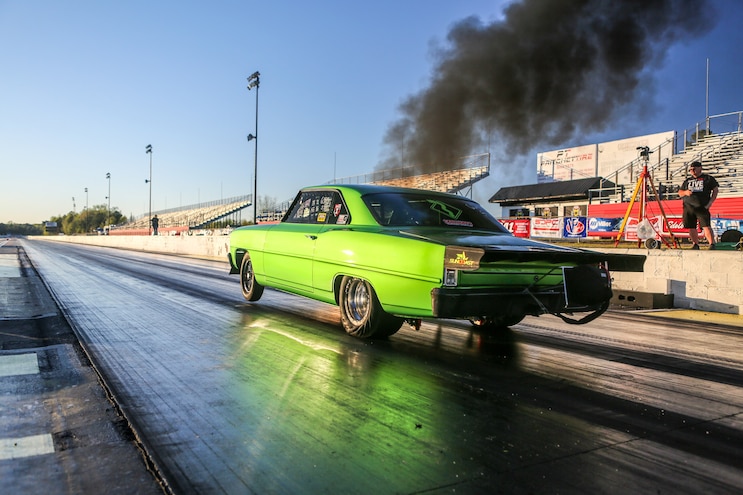 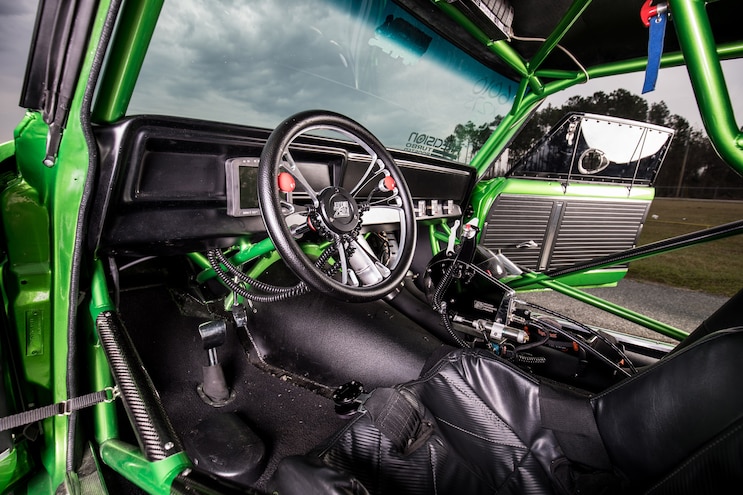 View Photo Gallery | 13 Photos
Photo 10/13   |   Great care was taken to keep the Nova looking as original as possible, including the interior. Amid the jungle gym of bars required by SFI and the NHRA sits a stock-looking dashboard filled with a digital display and nitrous timers. 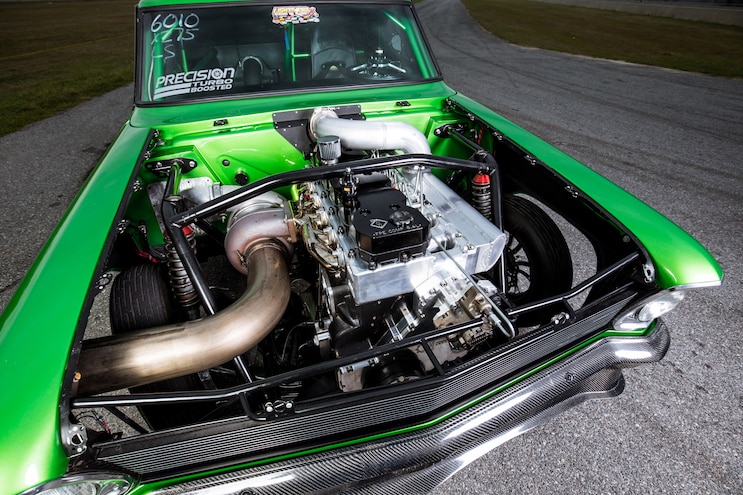 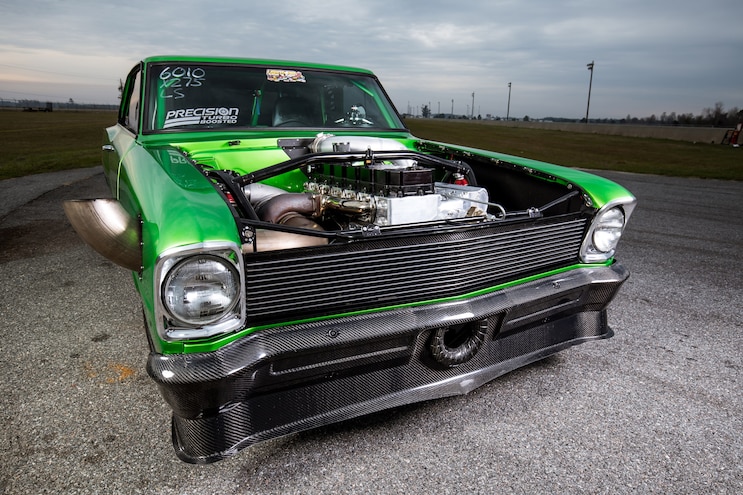 View Photo Gallery | 13 Photos
Photo 12/13   |   Gone is the chrome front bumper, and a carbon-fiber piece replaces it. The hole in the center used to feed a massive ProCharger centrifugal supercharger. Thankfully, that combination is long gone. 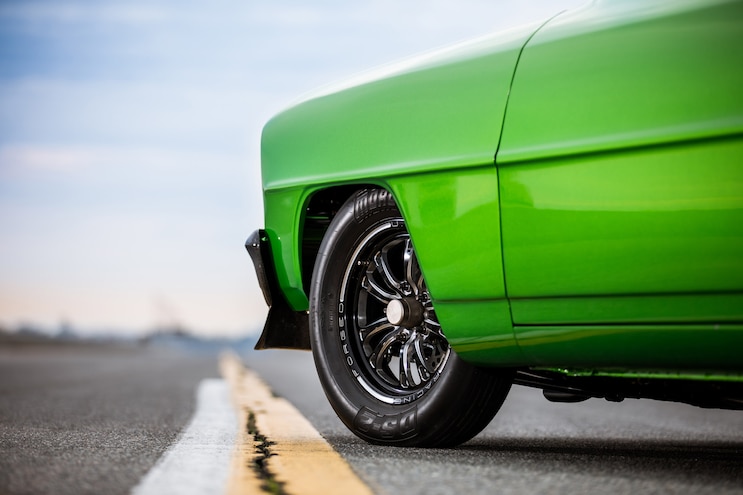 View Photo Gallery | 13 Photos
Photo 13/13   |   Black Weld Racing V-Series wheels contrast perfectly with the bright-green paintjob. The car is unique and definitely stands out in a crowd of Mustangs that typically pack the staging lanes at X275 events. The big question is, will we see Ryan’s hot rod competing in ODSS events?

- OF
By Michael Galimi
2 Articles