King of all Retirement Gifts 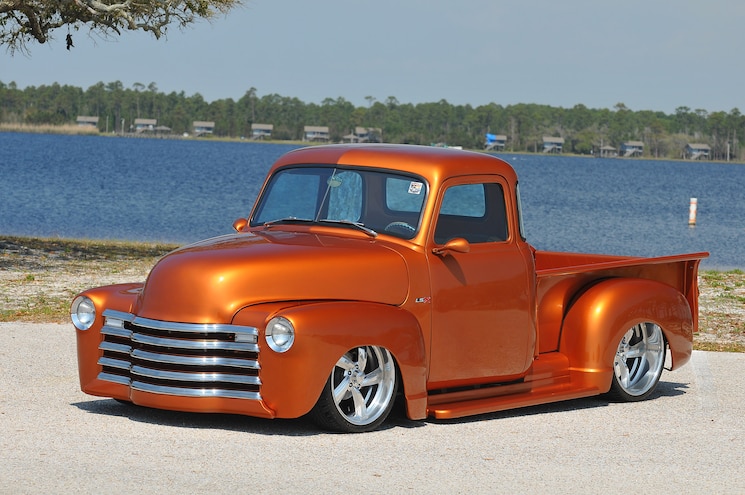 Retirement is that time of your life where you get to finally enjoy the fruits of your labor and your life’s hard work. For the past 32 years, Kenneth Lemieux of Marrero, Louisiana, has been employed at Jefferson Parish Department of Streets. He gradually worked his way up from the concrete crew to eventually the head of the department as Superintendent. Throughout those years, he never stepped out of the box and into something creative. That moment changed when he realized that his retirement was right around the corner. 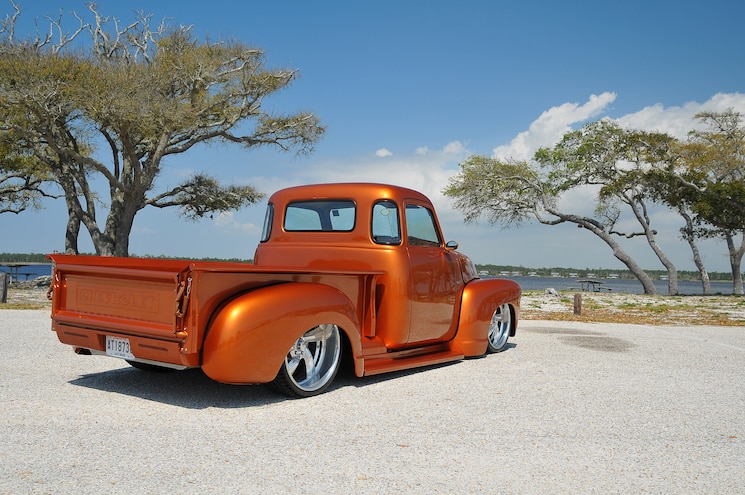 View Photo Gallery | 13 Photos
Photo 2/13   |   1950 Chevy 3100 The Boss Rear
During a family trip, Kenneth took his fiancé Angela to her mother’s house and noticed a old beat-up 1950 Chevy 3100 truck at the side of the house. The jalopy belonged to Angela’s half-brother and just appeared to be sitting around taking up space. “I knew it was some sort of an antique vehicle,” Kenneth says. “It was hard to tell exactly what the true potential was.” The truck had no motor, but Kenneth knew this was the perfectly bare canvas for his retirement project.
Kenneth paid $2,200 for the truck and had it towed to his home where the critical thinking began on his new project. A close friend, Mark Redo, told Kenneth the truck was a rust bucket and nothing could be done to it. To prove him wrong, he decided to bring it to a local body shop. There it just ended up collecting dust. He removed it from that shop and brought it to a different body shop. Again, no progress was made. Aggravated and to the point of almost giving up, he ran into Kerry Delatte, who told him he could bring the classic to life. He brought the Chevy to Kerry’s shop in Vacherie, Louisiana, where they laid down the groundwork and discussed the truck’s exact blueprint. 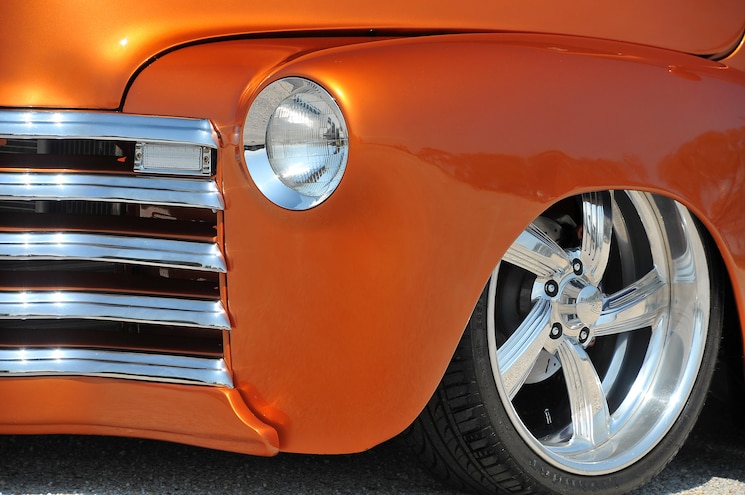 View Photo Gallery | 13 Photos
Photo 3/13   |   1950 Chevy 3100 The Boss Grille Wheel
Originally, Kenneth had wanted to use a S10 chassis for the Chevy, but they decided on a ’79 Chevy Camaro sub-frame and built the rest with square tubing. The next step, complete the bodywork by removing the rust and piecing it all back together. The doors were removed and switched over to suicide style for a more custom look. Kenneth purchased a 5.7L LS motor out of a ’02 Camaro SS. Once mounted, it was determined the cab needed a transmission tunnel to accommodate both the motor and transmission. The fuel tank was relocated to the rear, so they built a frame with a hinge in order to raise the bed up. 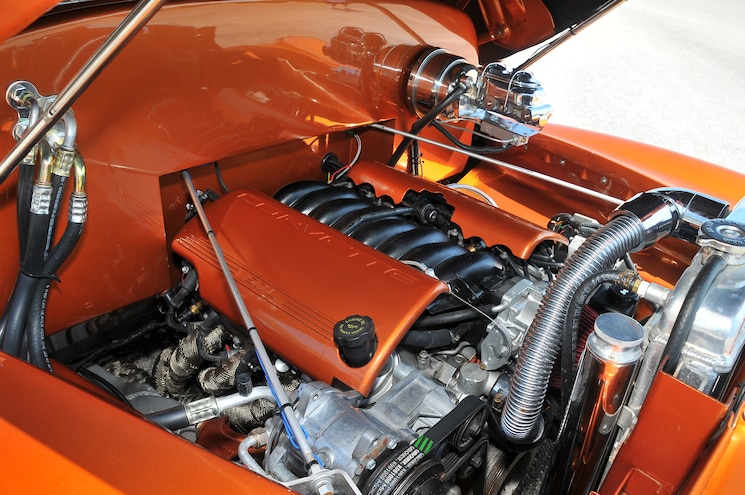 View Photo Gallery | 13 Photos
Photo 4/13   |   1950 Chevy 3100 The Boss Engine
The next step was to bring the classic 1500 lower to the ground by way of an AccuAir e-Level system and changing it to a three-link wishbone suspension. While the truck was being built, Kenneth hadn’t yet decided on a color. He went to the Cruising the Coast show for research purposes, looking for a color. He found a classic Ford with a paint job that stood out and got the paint code from the owner. Taking the code name straight to Bellerose Paint & Body Shop, Timmy Bailey coated the truck in DuPont Mandarin Copper. Living in Louisiana, Kenneth loves the gator look. So when the interior was ready to be added, he asked Robert “Toy” Torey to lay down reptile designs throughout the truck. 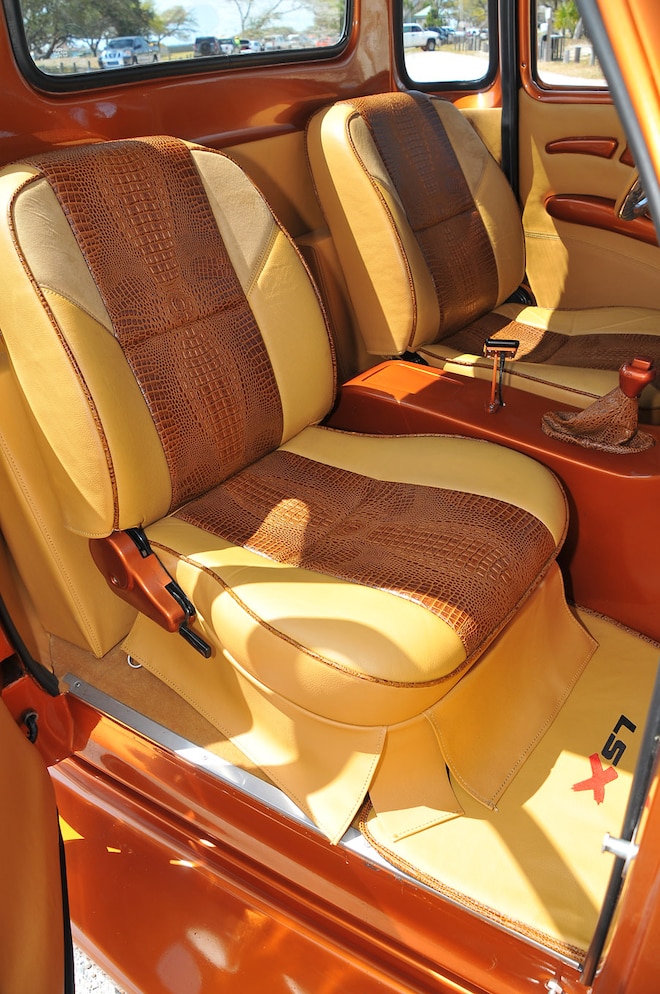 View Photo Gallery | 13 Photos
Photo 5/13   |   1950 Chevy 3100 The Boss Interior
Kenneth wants to thank his friend Mark for calling it a rust bucket, which motivated him to turn his once-neglected truck into a masterpiece. He wishes to thank God for putting him in the position to be able to build a truck of this caliber. He also wishes to thank his mother for reminding him to have patience and understanding. Kenneth and his beautiful fiancé Angela can now enjoy their golden years in a truck built in gold.