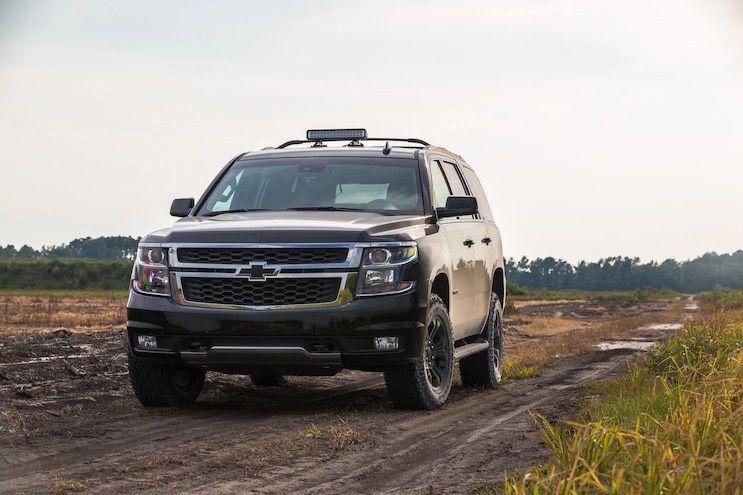 A convoy of blacked-out ’17 Chevrolet Tahoe and Suburban Midnight Edition SUVs haul ass along an unpaved road. The trucks ahead of us are periodically obscured by a swirl of kicked-up dust. Other than the steady ping of rocks along the underbody, the Tahoe we’re in is dead silent. We’re heading into The Range Complex (TRC), which looks like the isolated compound of some clandestine faction. The miles-long dirt road winds its way toward mobile trailers in the distance. What the hell is this place?
TRC is a Special Forces military training facility owned and operated by ex–Delta Force Lt. Col. James Reece. It provides tactical live-fire combat training as well as strategic communication courses to the military, government, law-enforcement agencies, and civilians. Reece’s team, some of whom are both instructors here and operations specialists for military and private contractors, are all either Special Forces veterans or active duty—primarily Delta Force. 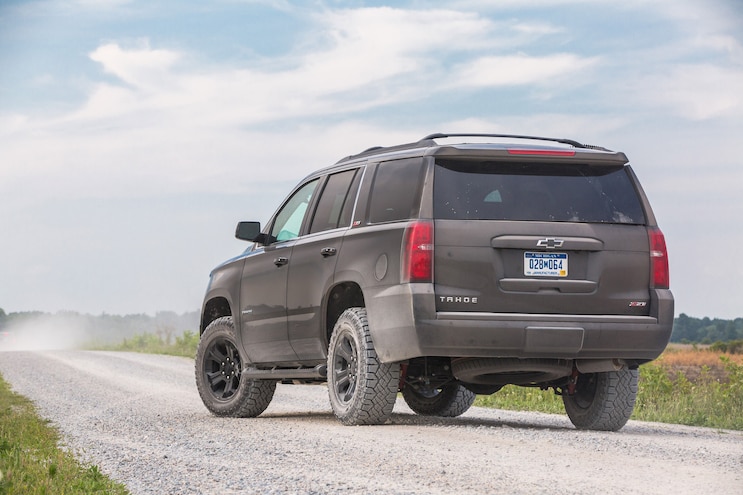 View Photo Gallery | 50 Photos
Photo 2/50   |   2017 Chevrolet Tahoe Rear
More commonly known as The Unit, Delta Force is the Army’s elite special-mission military outfit formed in the late-1970s to respond to incidents such as the Iranian hostage crisis. The Department of Defense sends The Unit in primarily for hostage rescue, counterterrorism missions, special reconnaissance, and the elimination of high-value targets. Until now, the closest we have ever gotten to guys like this in action was watching Chuck Norris movies.
Qualified to operate literally any vehicle, from a B6 Armored Suburban transporting the president through downtown Baghdad on Thanksgiving or a jinga truck heading up the Hindu Kush in Afghanistan to a jalopy hunting Pablo Escobar in Columbia, only the most experienced guys in The Unit get behind the wheel. Chevy SUVs have long played a significant role in the military and private security world, from Sarajevo to Bogotá to Beirut. The fullsize, body-on-frame Tahoe and Suburban are simply another piece of extremely specialized high-tech gear The Unit takes into battle. For folks like us, we want our Subs and Tahoes with active fuel management, wireless phone chargers, and stuff to make sure your teenager doesn’t text and drive. For them, they want reinforced armor and bulletproof glass.
Dust lingers heavy in the muggy North Carolina twilight, and we adjust our eyes to the pale watercolor sky as the sun begins to set. We’re escorted to an open-air concrete bunker called the Shoot House. A wooden catwalk stretches across it where the roof should be. After a quick briefing, our group is fitted with helmets and Kevlar vests and ordered to ascend the stairs toward the platform above the structure. Targets are positioned in the various corners inside awaiting their fates. A man in a thickly padded suit used to train attack dogs stands facing a dilapidated wood door barely on its hinges. 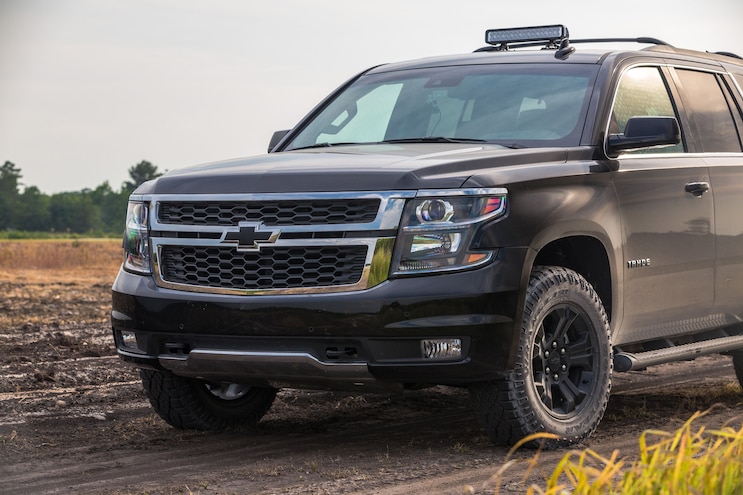 View Photo Gallery | 50 Photos
Photo 3/50   |   2017 Chevrolet Tahoe Front View
The flak jacket feels like it weighs 50 pounds and hangs heavy on our shoulders, compressing our chest and lungs. But when live ammo is about to be fired in various directions some 10 feet below you, you put on the body armor. In the distance, a pitch-black Tahoe screams toward the building over which we now stand. Theirs is no leisurely press drive. The Tahoe skids to a halt and five hulking men decked head-to-toe in camo and full tactical gear explode out of the vehicle. This isn’t make-believe anymore.
A black Labrador lunges through the busted down door and is on the “bad guy” in his bite-proof suit in an instant. Carrying an array of rifles and 9mm pistols, the soldiers weave in and out of the concrete walled rooms in a close quarter battle training demonstration, shooting at targets with choreographed precision. Gunfire explodes below us. This is a team comprised of some of the world’s finest surgical shooters. Years of training allow them to maintain composure in the highest-stress situations a human being could experience. No, Starbucks getting your name wrong isn’t one of them. They’re about pursing brilliance by mastering the basics, whether it’s shooting at insurgents launching grenades at their heads or driving 150 mph while taking hostile fire. Earlier in the day, before he got suited up, we were paired with a TRC operative on a 90-minute drive from Raleigh to Fayetteville. “Pick a vehicle and let’s head out,” we were told. We walked to the third Tahoe in line and looked around for a beat. The sandy blond head of an all-American guy who, dressed in civilian clothes, looks like your average Internet start-up employee poked around the intimidating and dead-sexy Tahoe LT Midnight Edition with blacked-out windows. 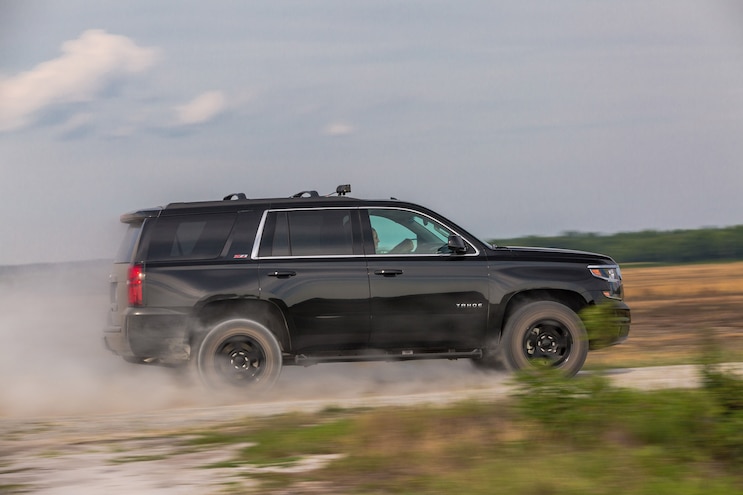 View Photo Gallery | 50 Photos
Photo 4/50   |   2017 Chevrolet Tahoe Drive
He introduced himself, sort of. For our purposes, we’ll call him “J” and leave it at that. Keeping these men safe is priority one, so were told in no uncertain terms that photography of the ops guys’ faces was not permitted. Plenty of very bad people scour social media trying to find whatever information they can. Enough said. “I heard I’m not responsible for it, and neither are you. So drive it like you stole it,” J said as he cracked a mischievous smile while we rolled out. His unidentifiable accent wouldn’t place him from any particular region of the country like some of the other guys.
The Tahoe’s acceleration proved impressive for a 5,600-pound SUV. Its 5.3L EcoTec V-8 puts down 355 hp and 383 lb-ft of torque backed by a six-speed automatic, plenty of power to haul its 8,400 pounds of max trailer capacity. When you ask it to do anything, it responds. It’s comfortable on the road as well, and doesn’t feel like the rugged, specialized military machine it’s also capable of being.
When asked why Tahoes and Suburbans were the trucks of choice, J’s answer came easily. Their wide stance can sit three across shoulder to shoulder, and these men have broad shoulders for the weight they carry, literally and figuratively. It’s quick. In J’s business, speed is safety. Plus, it’s incredibly durable. When an improvised explosive device blows half of one side of your truck off, you want it to still be able to get you the hell out of there. “Depending on the situation, you might want to drive something more subtle, so you don’t stick out like a dog’s balls, but for the most part we’re in these. You can kick the shit out of them, and they keep going,” J said. For a guy who’s done what I can only imagine to be a lot of kicking, he would know. 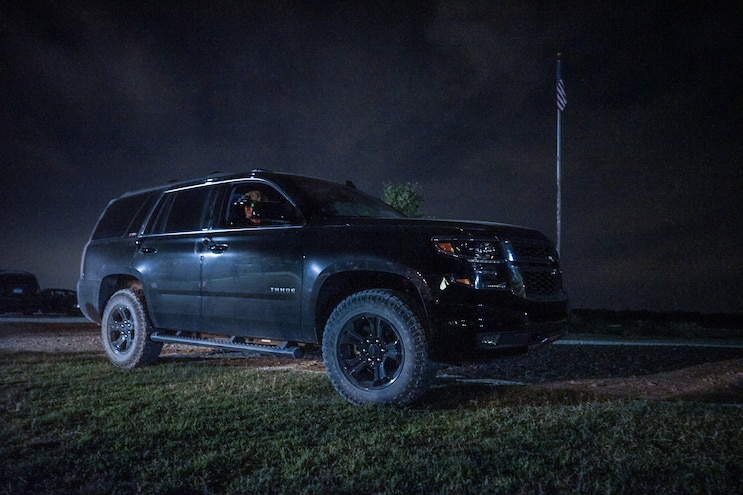 View Photo Gallery | 50 Photos
Photo 5/50   |   2017 Chevrolet Tahoe Night Time
Darkness has finally descended on the complex. Few lights flicker across TRC’s 1,982-acre sprawl. We sit in the passenger seat of a Tahoe equipped with the Z71 package, which features off-road–tuned shocks, tires, and skidplates. This Tahoe also has an infrared light bar strapped on the roof, and we’re in something called Surveillance mode, which means there isn’t a single light on in the entire SUV. The interior is as pitch as the black Bow Tie badge on the grille. Night-vision monoculars are secured to our heads. There were no helmets small enough for this writer, so the monocular is attached to a mesh cap aptly named a skull crusher.
We’ve lost track of J in the darkness, but Big Fred, who calls himself my chauffeur, buries the throttle and we take off like a shot, driving at speed in the rural night over dirt roads that cut through cornfields. The Z71’s suspension absorbs everything even at this maniacal pace, and if you can’t see exactly what’s coming that’s crucial. “If you wanna, take the NODS [night optical/observation device] off and look around to get the effect,” Big Fred suggested. I remove the monocular for a beat. “It’s like a horror movie.” He’s right, and we don’t like horror movies. When it’s our turn to drive, our sweaty palms grip a steering wheel we can’t see. Since the infrared light is helping illuminate what’s outside the truck, inside is black. Everything we do is by feel, shifting into gear, releasing the parking brake. It’s surreal. But instinct kicks in. We try to steady our breathing and remember about brilliance in the basics. But even with our driving experience, the hazy green glow of road ahead is limited, so we miscalculate distance and don’t take turns sharply enough. It’s disorienting, uncomfortable, and stressful.
Before the night was over we’d shot 9mm Glock pistols, an M4 rifle, and a .260 Remington sniper rifle. We’d driven under highly abnormal conditions and got to talk to men who’ve executed spectacularly dangerous missions that even the best Hollywood screenwriters likely couldn’t conceive. This was the first time journalists were allowed into TRC, and we’re honored to have been part of that group.