Where Fords Learn To Fly 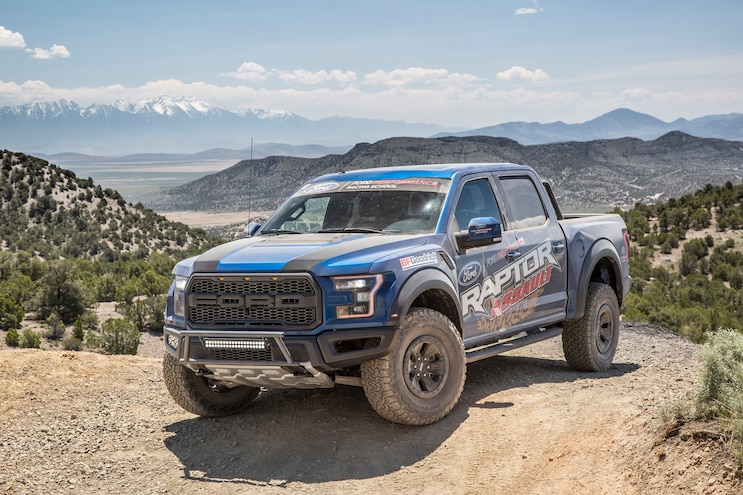 If you spend more than $50,000 for a flying truck, you’d hope the manufacturer would teach you how to jump it. They won’t—not even at the course Ford offers to new ’17 Ford F-150 Raptor owners. Maybe instructors at the Ford Performance Racing School (FPRS) aren’t keen to have 20 or so folks with unknown driving skills jumping the 5,600 pounds of sand-devouring rad that is the Raptor—or maybe it’s their lawyers—but either way we grudgingly understand. Regardless, as we sat through the first 30 minutes of mandatory classroom time at the Raptor Assault driving school, we were assured that driving the ’17 Raptor is like bringing a water cannon to a pillow fight. So maybe not jumping the truck would be OK. 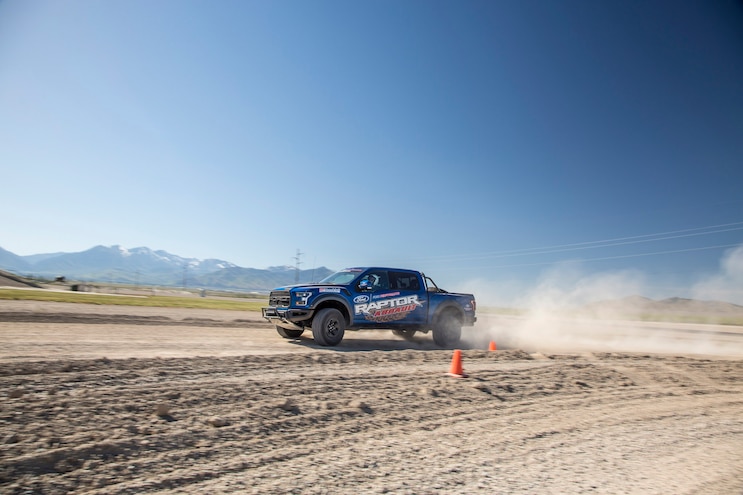 View Photo Gallery | 39 Photos
Photo 2/39   |   Ford Performance Racing School
Ford’s owner program is a unique one. The Motor City manufacturer offers more courses for more vehicles than any other. Whether you drive a Fiesta ST, a Mustang GT350, or a Raptor, Ford wants you to know how to use what you bought. Launched in 2011 and held at the Utah Motorsports Campus (UMC), a state-of-the-art facility about 30 miles outside Salt Lake City, the Assault driving program’s goals are simple: give ’17 Raptor owners deeper knowledge about the features and capabilities of their truck, and show them how to have a ton of fun in it. Our team of boss instructors gave us students an initial introduction to the Raptor’s cockpit, our real classroom for the day, including the basics of what’s where. Other than two-way radios, off-road lights, and a bed-mounted roll bar, the Raptors we’d drive were stock. We teamed up two to a truck, driving Baja rally team style, meaning one drove while the other scouted and observed. Right-seat driving isn’t wasted time if you’re paying attention.
An owner’s manual can only teach you so much. Practical application of each driving mode was the first lesson to familiarize us with what this Swiss Army knife on wheels can do. Lapping around a quarter-mile gravel track, we tested out Normal, Mud and Sand, and Baja modes first, feeling the difference between all of them on lose terrain. Before our final rock crawling demo, the group was told in no uncertain terms when switching to Rock Crawling mode to coast to a stop in Neutral and then apply the brakes, giving the Raptor the opportunity to make the shift into 4L standing still. 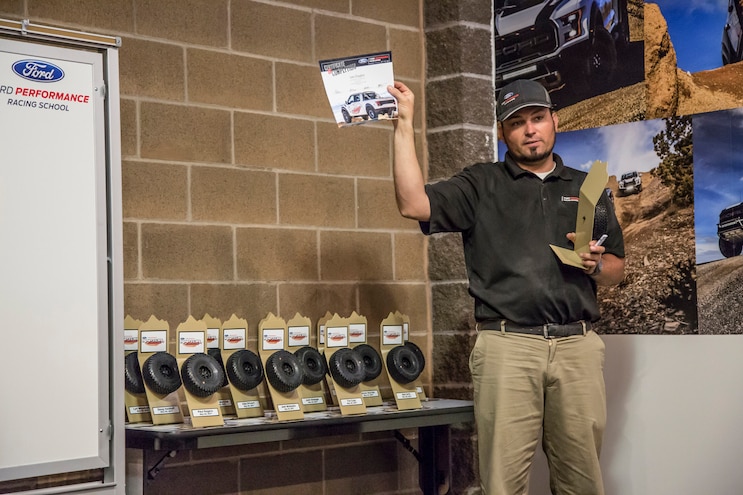 View Photo Gallery | 39 Photos
Photo 3/39   |   Ford Performance Racing School Course
The Raptor is equipped with an electronic transfer case that automatically merges all-wheel drive and four-wheel drive for anything the driver throws at it. Well, except for automotive journalists, who on the initial press launch last year tried to test a shift-on-the-fly capability that doesn’t actually exist, to disastrous, gear-gnashing results. We did not want replicate the stunt, but we bet we could name two of the guilty culprits who executed said maneuver.
Driving sideways up a man-made mountain for our final exercise before hitting real dirt was weird. Sitting in the cab of a truck at a 30-degree angle is, in a word, unsettling. Throw in a 200-pound instructor hanging off the side of your truck to prove just how stable it is and it’s alarming, at least until the truck doesn’t budge. Then it’s alarming, but impressive. After employing the locked rear differential up a fabricated steep grade, then using the controlled hill-descent feature, we were deemed ready to get out into the wild.
In what must have looked like a convoy out of some post-apocalyptic “sponsored by Ford” television movie, we drove single file to the Jacob City trailhead, which lives in a swath of low brush cut with the jagged scars of dirt tracks below the watchful eyes of the Oquirrh Mountains to the west of the Great Salt Lake. I was eager to get out of Normal mode, which felt exactly that on the highway. 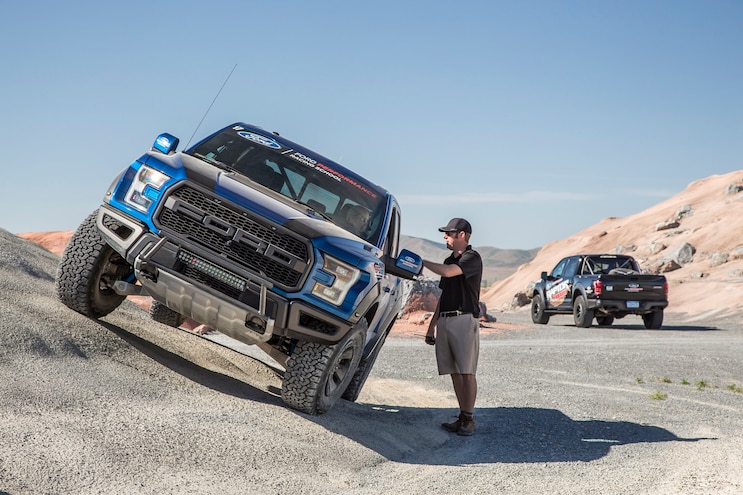 View Photo Gallery | 39 Photos
Photo 4/39   |   Ford Performance Racing School Side
Mud and Sand mode that eats up gullies and grips around sharp turns was way more like it. Locked into 4H with the steering freed up so no one gets stuck anywhere, this mode also shifts the brake bias to the front and uses less ABS to wad up dirt and or mud under the tires, helping you to stop, if you must. The Fox shocks’ 3-inch-diameter canisters and nine-stage bypass damping, coupled with the Raptor’s improved 13.0-inch front and 13.9-inch rear suspension travel, devoured the trail as advertised.
Our ominous procession then headed to Rattlesnake Canyon, one of the many boulder-strewn, uphill byways that occasionally felt like driving straight up into the blue heavens above the Oquirrh range. In our snake-like line of trucks, we traversed up steep, 25-degree grades using Rock Crawl mode. In real-life application and without 200-pound instructors hanging off the cab of your truck, the Raptor is as sure-footed as you want it to be on its specially designed BFGoodrich KO2 tires. With the rear diff locked for serious traction and utilizing left-foot braking over jutting obstacles, the 3.5L high-output EcoBoost V-6 and its 450 hp and 510 lb-ft of torque crept up impossible-looking inclines easily. Even without a launch ramp in sight, this was impressive.
At 7,200 feet we hit our max altitude and made our way back down using hill descent. Rock Crawl mode on the Raptor is surprisingly drivable. It automatically locks the rear differential, which can be manually unlocked when not needed, and it uses the low-range transfer case’s gear reduction of 2.64:1 for better grip, meaning this truck still moves over rough stuff, sure-footed and steady. There wasn’t ever a time we felt the technical tools the Raptor engaged held us back. Its intelligence seems to know what to put out when. In a word, it’s idiot-proof. 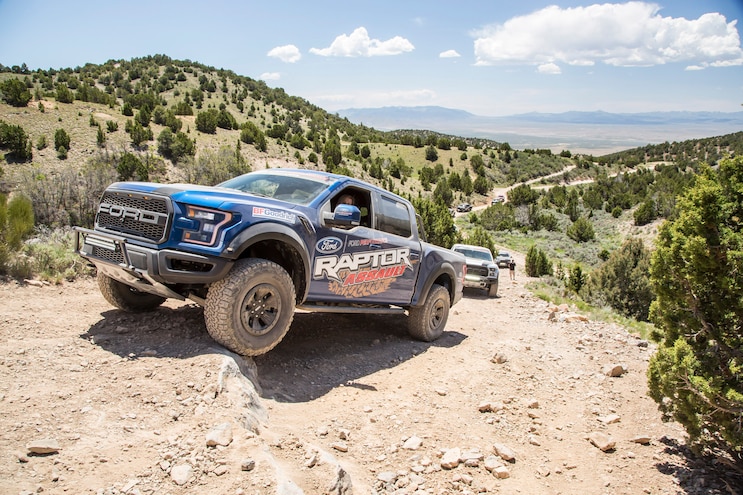 View Photo Gallery | 39 Photos
Photo 5/39   |   Ford Performance Racing School Ascending
On the way down we had time to see Utah show off its finery with the Indian paintbrush still in bloom and the conifers and quaking aspen waving at us as we passed. It wasn’t until halfway down we noticed the seatbelt had been chaffing the skin on our left shoulder. No amount of adjustment helped, but if the Raptor was going to leave a physical as well as an emotional impression on us, this is one we wouldn’t complain about.
The final desert course wasn’t exactly a desert. It was more a trail etched through low brush by the myriad of ATVs and 4x4s that have gone before. Shifting into Baja mode throws the transfer case in 4H and adjusts throttle and steering to be wicked responsive. The gears are held longer, it spools up the turbos quicker, and the brake bias changes to the rears at low speeds, which swings the back end of the truck more like a rally car.
This second-generation Raptor lost more than 500 pounds from the first, most of that in the rear, so maintaining traction and countering and correcting for oversteer was part of the dynamic instruction on this course. This was also the only time we were required to wear helmets, and in our experience, helmets generally equal higher fun quotient, so they can call it a desert all they want. 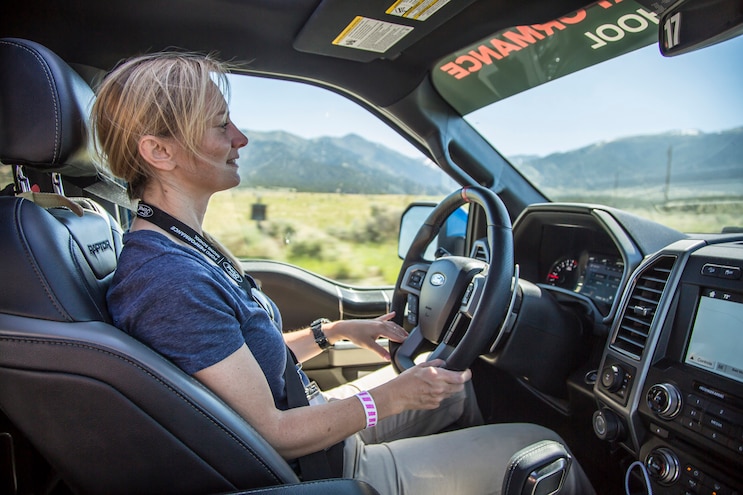 View Photo Gallery | 39 Photos
Photo 6/39   |   Ford Performance Racing School Driver
Even restricted to 50 mph, which we felt less limiting than sage for some of the participants present, the Raptor didn’t disappoint. We were warned not to do anything stupid. It would take a Life Flight chopper 32 minutes to reach our location, so better not tempt their response time. The lightweight, overachieving half-tonner showed us a great time flying over dusty straightaways. Driving fast and loose, Baja mode puts power exactly where it needs to be from front to rear, and it won’t allow you to get too sideways. If steering out the side windows is your thing, by all means shut all the traction aids off, but the Raptor’s nannies are like Mary Poppins; they’ll let you get away with fun stuff and they’re not too overpowering, so you’re totally okay having them around because of it.
We wrapped up the day back at the UMC for graduation. We even got a sweet participation trophy that we wish the nice folks at the FPRS had told us about so we’d have brought bigger luggage. Overall, Ford does a stellar job making sure Raptor owners know how much great stuff they’ve got under all that aluminum. No, no one’s going to out–Ken Block the real Ken Block after taking this course, but it’s clear the teams at Ford and the FPRS are serious about getting owners to know more about what they’re driving, and we applaud that.