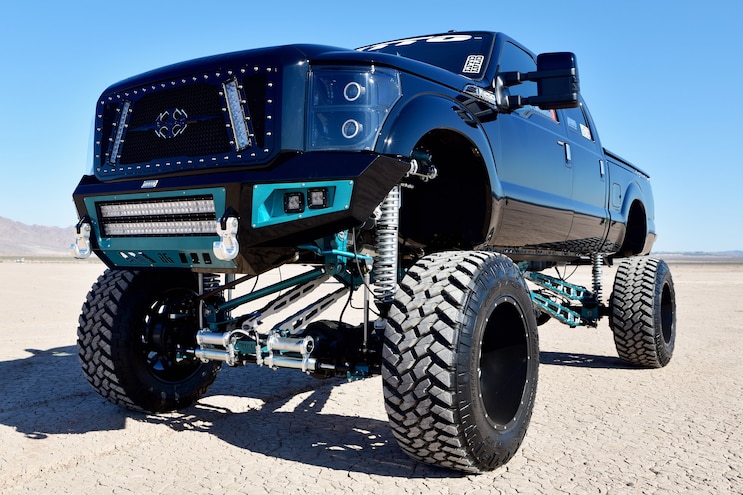 Lifted trucks and music were always a passion for Sweetwater, Tennessee, native Caleb Harris, who started out with a lifted F-150 in high school. That passion kept growing for Caleb and eventually turned into an obsession. “As a small kid, I always had an obsession with lifted and monster trucks. That quickly became an obsession I couldn’t get rid of!” he says. Caleb is also lead singer and rhythm guitarist in a band called Exit Sixty. The band predominantly plays country and southern rock and is looking to make it big in the music industry. Lifted trucks? Rock ’n’ roll? Country music? What’s not to like? 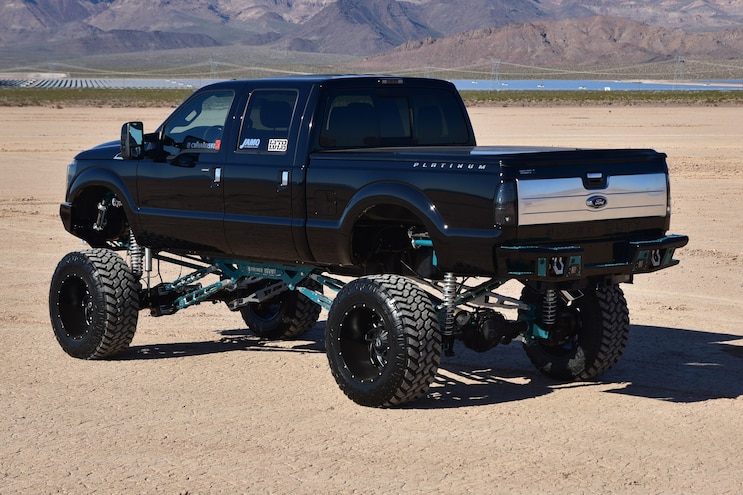 View Photo Gallery | 18 Photos
Photo 2/18   |   2016 Ford F 250 Stryker Rear
In May 2016, Caleb decided he needed to be part of the SEMA show “truck club.” Caleb went to Stryker Off Road Design to discuss options for building up his new ’16 Ford F-250 Platinum. Stryker recommended he contact Cris Payne, aka Truck Guru, to discuss a complete build, and the rest was history. As you can imagine, it was not all smooth sailing for Caleb’s build. From shipping delays to parts not fitting, it came down to the wire leading up to the project completion date. Unfortunately, the gift of time was snatched away all too soon, and the Blue Oval was not finished by the deadline. Having no choice but to load up an uncompleted truck and put the final touches on while in Sin City, Caleb says, “We were lucky just to make it to Vegas.” 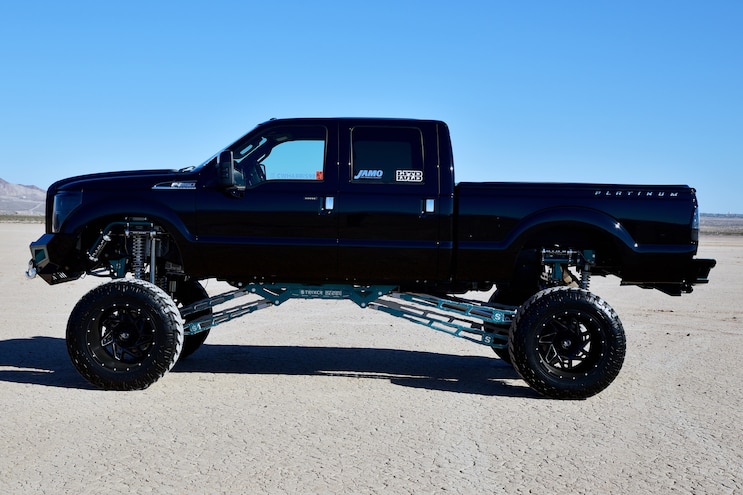 View Photo Gallery | 18 Photos
Photo 3/18   |   2016 Ford F 250 Stryker Side View
The first thing you will notice about Caleb’s truck is that it is quite a bit taller than many other builds, courtesy of the huge Stryker Off Road Identity Series 19-inch suspension lift. The funny (or maybe not so funny) thing, which wasn’t noticed until the coilovers arrived in Las Vegas, was that the F-250 was designed around a 16-inch lift, creating issues for components, including the driveshaft, brake lines, and link bars. JAMO Performance Exhaust, located in Las Vegas, Nevada, allowed Caleb to finish the truck at its shop, and luckily Kellan Meadows from King Shocks, who was there helping Caleb, was able to locate the necessary parts. They thrashed and stayed up all night, finishing the truck just four hours prior to the vehicle roll-in time. 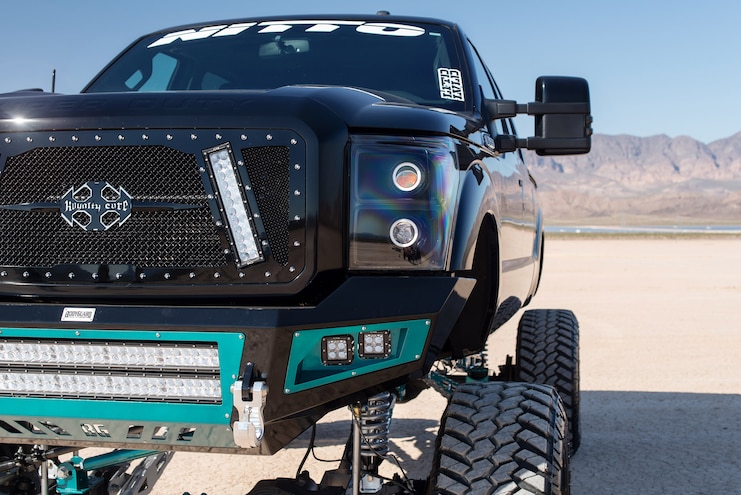 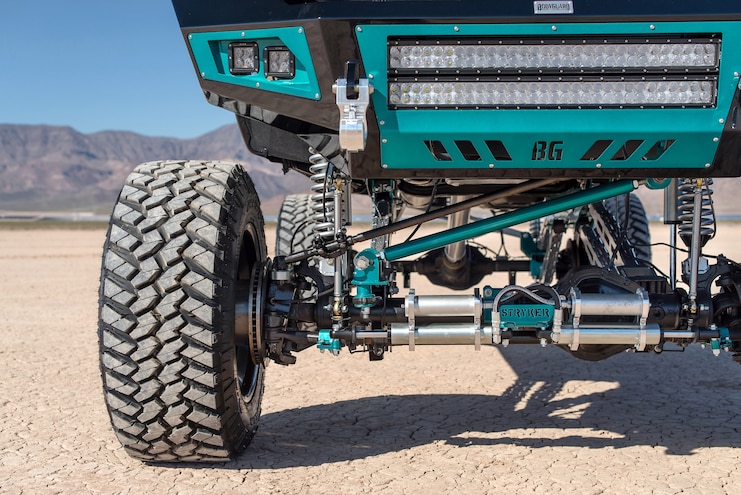 View Photo Gallery | 18 Photos
Photo 5/18   |   2016 Ford F 250 Stryker Stryker
The finished product was a towering structure of a Ford F-250 Platinum-edition diesel rig. So big, in fact, that the 22x14 Dropstars wheels wrapped in Nitto Trail Grappler tires were too wide for the trailer! The suspension parts are simply insane, receiving over-the-top treatment in the form of billet accents and Jamaican Teal powdercoating. The prominent front and rear Bodyguard A2 Slimline series bumpers are outfitted with Monster Hooks recovery hooks, and a Royalty Core front grille completes the look. The ever-popular combination of the HornBlasters train horns, an UnderCover truck lid, and a CargoGlide slide-out were also installed on the Ford. Since music is such a huge part of Caleb’s life, he chose to install a Wet Sounds Stealth Series weatherproof soundbar on the outside of the Super Duty. Lighting for this sky-high beast was provided by Off Road LED Bars (OLB), Recon, and Plain an Simple by design. You will also notice the “Jamaican me crazy teal green” found its way as an accent color adorning the exterior. Stopping this animal are brakes from R1 Concepts on all four corners. A JAMO Performance exhaust, PPEI tuner, and some underhood parts from No Limit Fabrication provided the performance modifications needed for Caleb’s truck, pushing the Power Stroke’s power just past 400 hp and 900-plus lb-ft on the torque side. 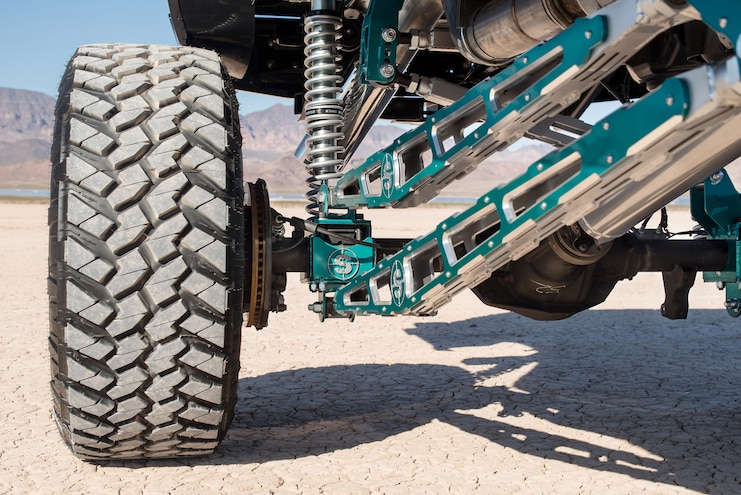 View Photo Gallery | 18 Photos
Photo 6/18   |   2016 Ford F 250 Stryker Suspension
Caleb admits that with just a few hundred miles on the odometer, the Ford’s not a daily driven vehicle. He states he just likes to open the garage and stare at it. The addiction for lifted trucks is still with Caleb, and he’s already planning builds for the 2017, 2018, 2019…SEMA Shows. “One day, I will be too old to climb into one of these, but I won’t let that stop me!” 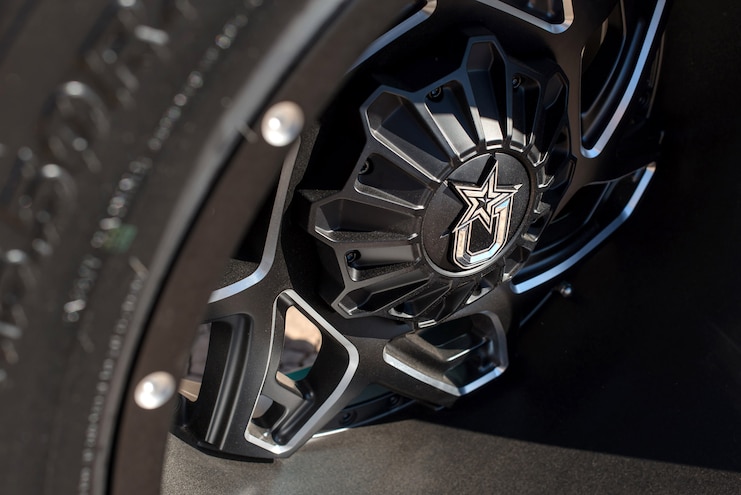