We Visit Drive-A-Tank and Do Just That!

Full Commando: Tanks For The Memories 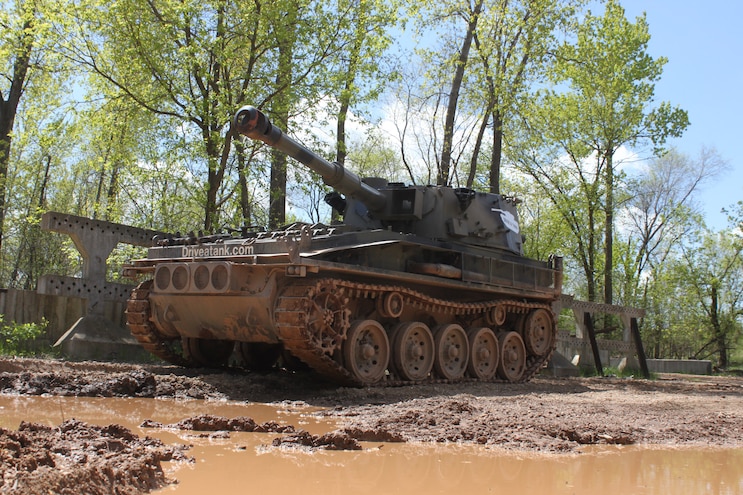 Above a row of trees, a plume of dark smoke rises. Mechanical sounds of creaking and whirring fill the air. The ground starts to rumble. Beyond the corner of a dirt road, eyes strain to make out any movement. The anticipation grows. Then, just when you think you’re safe, it emerges. The iconic Sherman tank fills your view.
This spectacle of the World War II–era M4A2E8 Sherman driving in real life is thanks to Drive-A-Tank owner Tony Borglum. He has studiously collected, repaired, and welded together historic tanks, as well as an impressive cadre of parts lining his warehouse. His collection includes the Sherman, a Russian T-54, several FV4201 Chieftan battle tanks, an FV432-APC armored personnel carrier, and an FV433 Abbot SPG. This is a pretty good assortment considering the business has only been around since 2006. 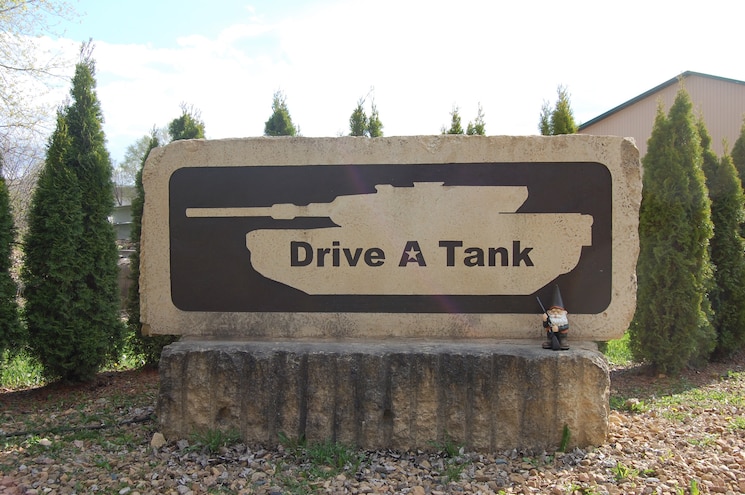 View Photo Gallery | 37 Photos
Photo 2/37   |   M4A2E8 Sherman Tank Drive A Tank
Located just off Main Street in the little town of Kasota, Minnesota, the 23-acre Drive-A-Tank facility sits innocuously with one large building and a sign marking its location. It is one of those places hidden in the American heartland unknown to many Americans, including many Kasota residents. Borglum tells us the majority of his clients come from out of town by way of the Minneapolis airport, some 70 miles away.
Surrounded by trees, a large building sits near the road. It looks like any other Morton building, yet when you turn the corner, an array of tanks, Humvees, and large Army trucks appear. It is nearly every person’s childhood dream come true: tanks to drive, cars to crush, and houses to blow through. Borglum built his business to fulfill dreams.
“We offer many different driving adventures that range from experiences with a little bit of driving to an entire day’s worth,” Borglum says. “We do single-car crushing and double-car crushing. We offer the experience of driving through a house. If you would like to crush a car and take it home with you, we have delivery options available.” View Photo Gallery | 37 Photos
Photo 3/37   |   M4A2E8 Sherman Tank
These experiences range from a few hundred dollars to well into the thousands. It may seem like a lot of money to some, but this is one of the last places in America you can have the experience of driving a tank, including the iconic Sherman.
Climbing into one of the large Army trucks, we ride out to a meeting spot setup alongside a dirt path cut into the forest. Here Borglum demonstrates how to operate one of the multi-ton machines, and it’s actually simpler than one would imagine.
All the tanks and the APC we drove have two long sticks—like a skid steer—and a gas and brake pedal. The sticks turn the tank right or left, and unlike a skid steer, it’s by no means a jerky action. Instead, it is often a use-both-hands-and-pull-with-all-you-have experience for tight turns.
Each of the vehicles is powered by a diesel engine and simple transmission with just a few gears. Push the gear selector forward, pull on the sticks, hit the gas, and the tanks are rolling.
Driving along at what feels like a quick 30 mph, we navigated the tanks through the woods the best we could. The driver’s cockpit is located on one side of each tank, making it an exercise in estimating just how wide the tank was to navigate the turns. Unlike a truck, where visibility is quite good, driving the tank wasn’t nearly as easy. Consistently, we got the tank too far to the right or left, and seeing the road ahead was based on how much you could handle having your head in the breeze eating dirt. There is a reason why the movies show tank drivers with dirt-caked faces, offset by very clean skin behind the goggles. 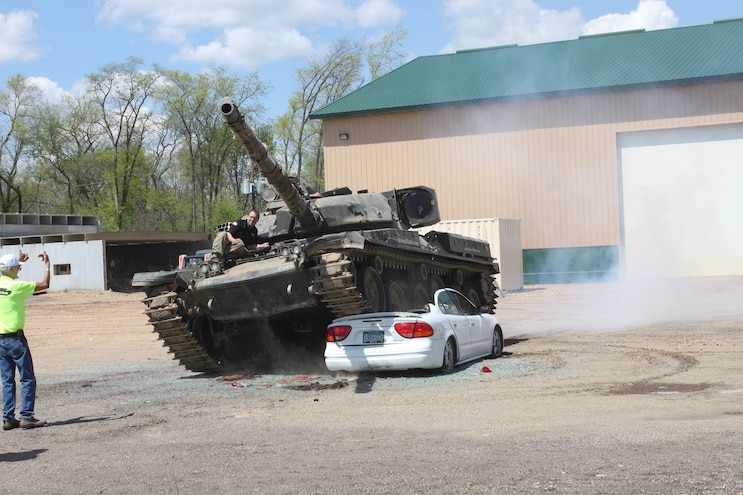 View Photo Gallery | 37 Photos
Photo 4/37   |   M4A2E8 Sherman Tank Crushing Car
Coming around the corner, we slow and line up to drive the tank through a small pond. As the tank cruises through the water, you can feel it dive in and pop out of the pond’s bottom with water flowing off the sides. We do this several times—watching, then riding, and finally driving the tank.
Next it was car-crushing time. Borglum lines up the 60-ton Chieftain battle tank for its glorious run over a car, making the job easy for us. All we did was hit the gas and listen to the sounds of the car being flattened. Incredibly, it was hard to tell we had crushed anything from the driver seat. Sitting up in the gun turret on another run allowed a much different vantage point, since we could see the front of the tank rising up as it rolled right over the car.
Surrounded by tanks and parts, the natural question is how Borglum got to this place.
“Back in 2006, my dad and I were vacationing in Europe and noticed all these places to drive tanks,” Borglum says. “We noticed nobody in America was offering a tank drive. To us, it was a no-brainer.”
Bringing this experience to America meant importing equipment, traveling to army-surplus sales, and learning everything he could from old veterans and other enthusiasts. He soaks up all of this knowledge to make his tan-driving experience as historically accurate as possible. Preserving this part of our military history and sharing it with others is a big part of what keeps him going.
“What is America without a place you can drive tanks?” Borglum says. We couldn’t agree more.