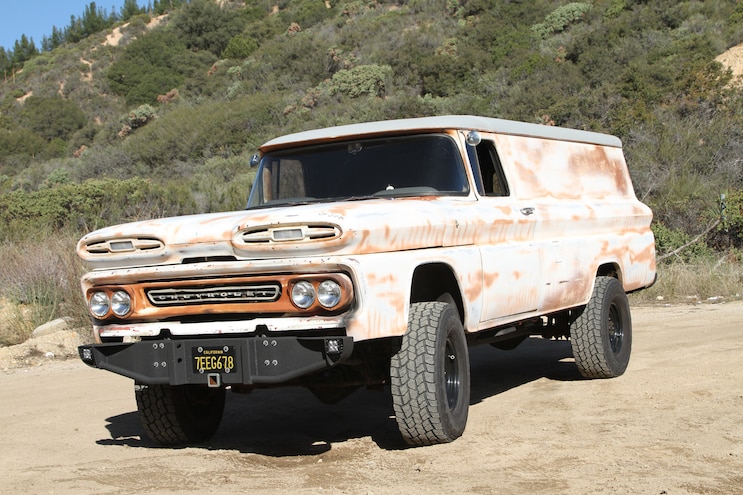 Jake Selders Jr. lives in the foothills of Southern California’s San Bernardino Mountains and has always loved the outdoors and trucks. While he’s owned several trucks over the years, Jake says he wanted something that is unique, cool, and capable of taking him to his favorite remote fishing spots.
Partial to the styling and the space for gear ’60-to-’66 Chevrolet panel trucks offer (Suburbans with windowless sides, two front and rear doors, and only a single front seat as standard equipment), Jake went looking for one and found a well-used but mostly straight ’60 C30 model. The rig was in great mechanical condition, considering it was 53 years old when he found it.

View Photo Gallery | 43 Photos
Photo 2/43   |   Jake Selders Jr. blended the old-school style of a ’60 Chevrolet Suburban panel truck with the reliability of a ’95 Dodge Ram 3500. The result is one cool, not-so-old-school rig.
Although the panel’s stock 3.9L (235ci) I-6 gas engine might have been a good powerplant in its day, Jake deemed it unacceptable for his needs. Always a fan of diesel trucks, Jake began searching for the perfect donor rig to supply a driveline. He also wanted to upgrade the older frame to handle the torque of a modern diesel engine. A big fan of Cummins-powered Dodge Ram pickups, Jake decided a 5.9L oil-burner would be the perfect engine for the build. So, when measuring trucks to find the best fit for the classic Chevy panel-delivery body, he discovered the frame from a ’95 Dodge 3500 regular cab longbed was almost a perfect fit. Even better, this early second-generation truck was a four-wheel drive, perfect for getting off the pavement and down the backroads for fishing and camping.
The only problem with the combination was the Cummins I-6 is much longer than the stock gas engine. To compensate for the difference, Jake mounted the truck’s grille in front of the radiator and then created a custom cowl for the hood and two front fenders (which were extended). This solution to make the front clip fit the engine was simple in design but required some expert bodywork. But now, unless you see Jake’s rig parked next to a stock panel truck of the same vintage, you wouldn’t know its nose is longer.
Jake really likes the truck’s patina, the light surface rust peeking out from beneath the original paint. To preserve the oxidized look, Jake’s friend, Lil Louie, matched the original patina with a cool color update, while retaining about 60 percent of the original patina. To deaden noise and keep the interior washable after those muddy days off the pavement, the interior was sprayed with black Line-X. To further reduce the tin can popping of the stock roof, the very top cap was sprayed with a gray Rhino Linings mix.
Merging both trucks’ electrical strategies was the hardest part of the project. The Suburban’s wiring is quite simple compared to the later rig. However, the simplicity isn’t an advantage. The panel’s original headlights, running lights, wipers, and turn signals were retained, and everything else from the Dodge Ram was transplanted, except for the gauges. Auto Meter’s vintage instruments were installed in a billet-aluminum dash panel for an updated stock appearance. A period-correct-looking replacement radio was used, too, as well as a Vintage Air air-conditioning system.
The Dodge Ram’s steering column was swapped into the panel, giving it cruise control and antilock brakes. Other electrical upgrades are LED foglights, backup lights, and a set of train horns. The original 60/40 front bench seat is reupholstered with more padding but retains an old-school look.
Other upgrades include two custom fuel tanks—one in the stock location and another behind the axle, for a total of 85 gallons. Jake says this gives him about a 1,280-mile fuel range on the highway. He also has a water tank for the outdoor shower and a built-in, 20-gallon gas tank for fueling dirt bikes. Two underbody deep-cycle batteries power the shower and lights when camping. To support the extra weight of the full fuel and water tanks, a set of firestone airbags is installed in the rear. 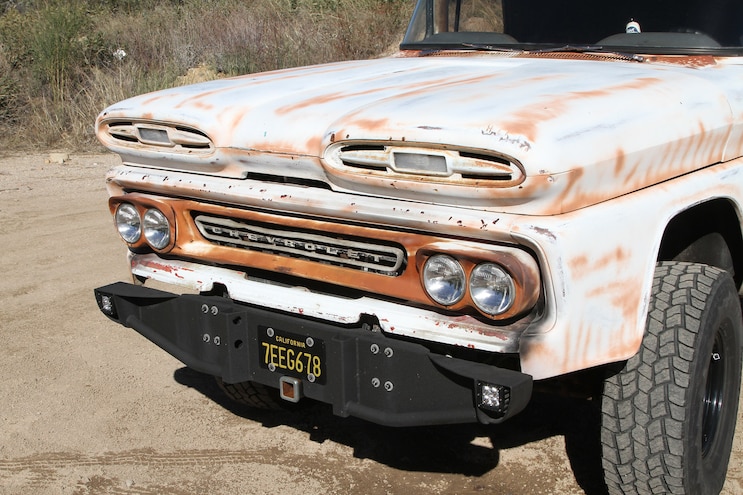 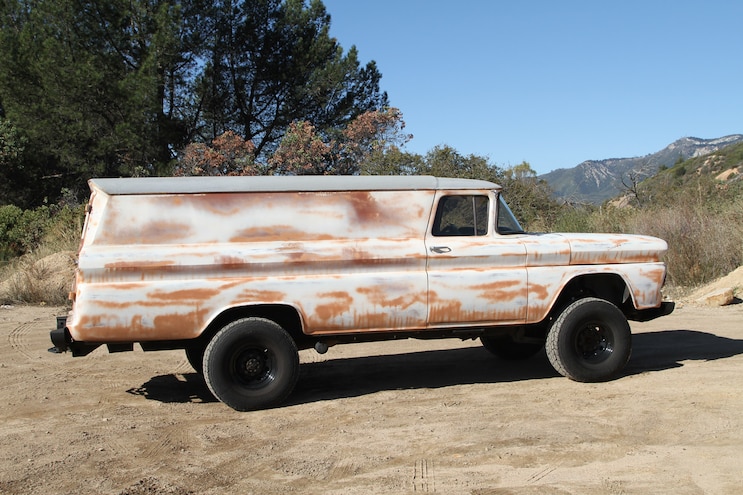 View Photo Gallery | 43 Photos
Photo 4/43   |   The body’s patina was purposely retained. In fact, it had to be reproduced when the front fenders and custom cowl were created to compensate for the longer 5.9L Cummins engine under the hood. 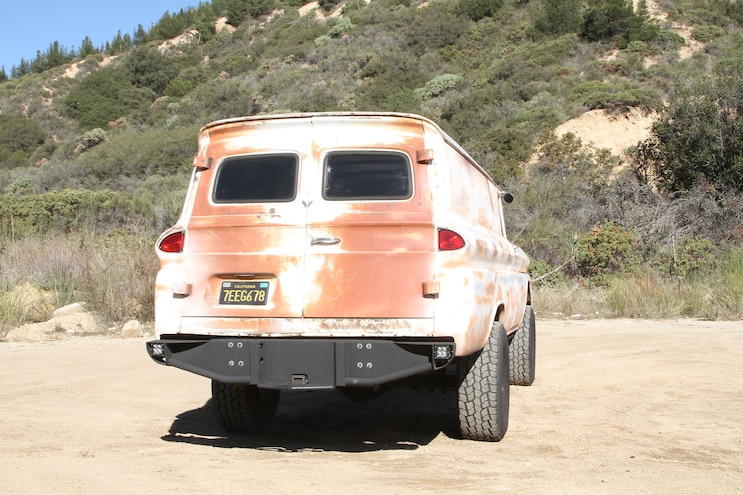 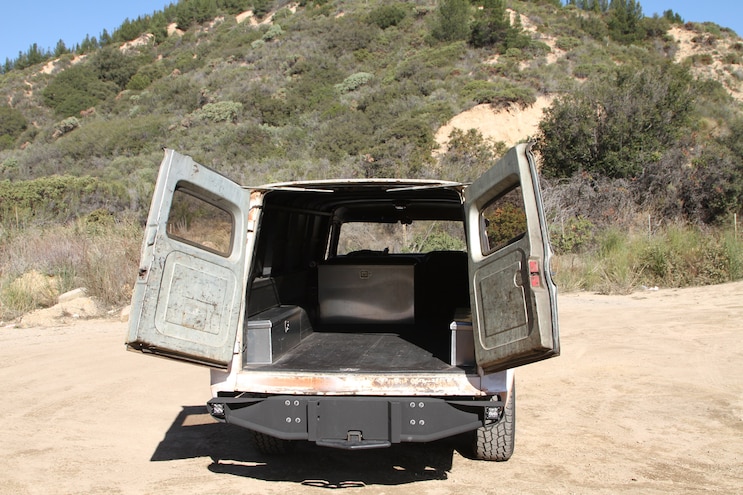 View Photo Gallery | 43 Photos
Photo 7/43   |   To hold gear for fishing and hunting excursions, Jake added three aluminum storage boxes in the rear cargo area. The interior is also covered in black Line-X for noise reduction and easy washout after trips to the backcountry. 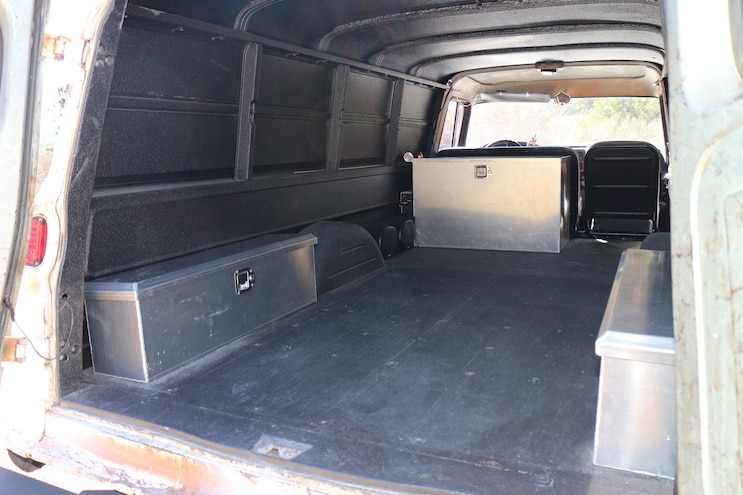 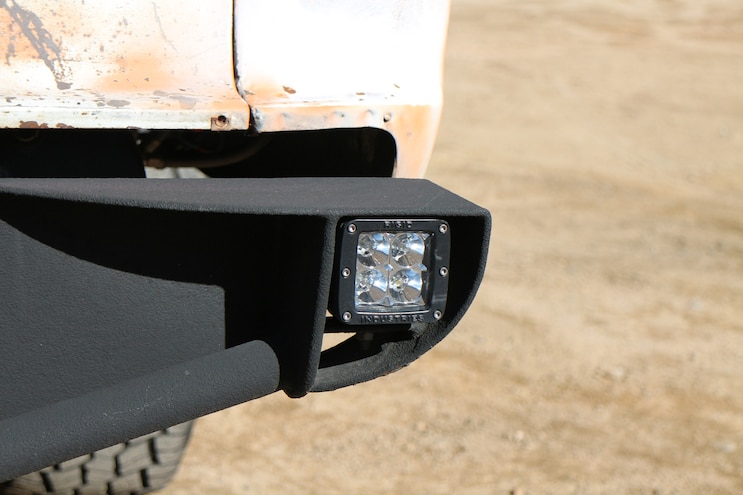 View Photo Gallery | 43 Photos
Photo 9/43   |   Rigid LED lights are mounted in the rear bumper for backup use as well as lighting up the night. 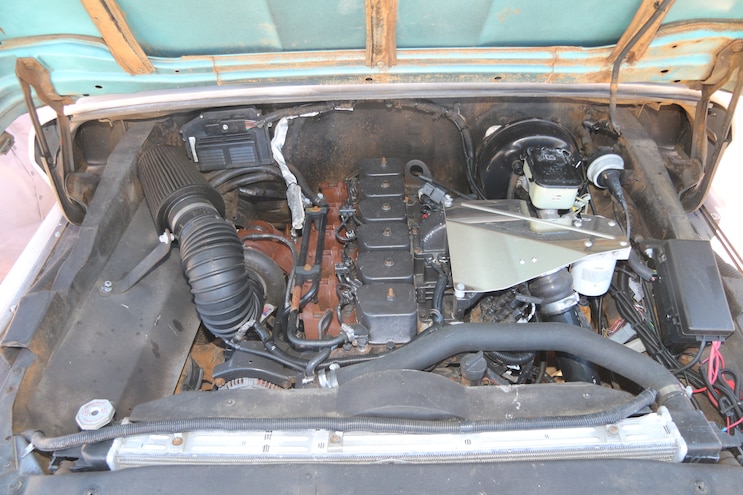 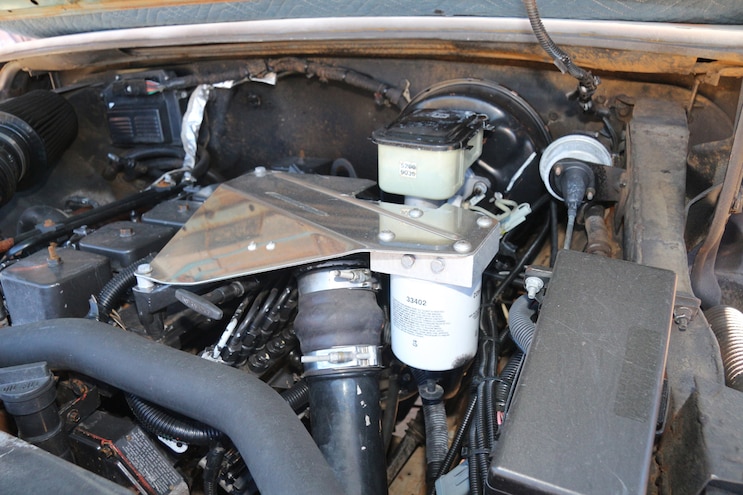 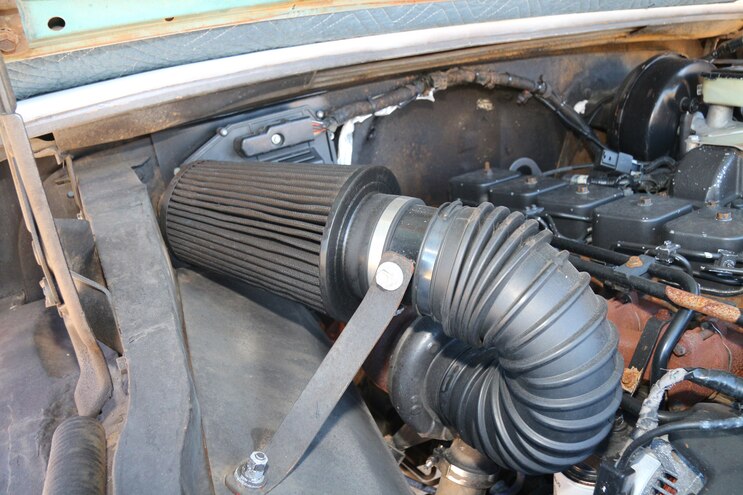 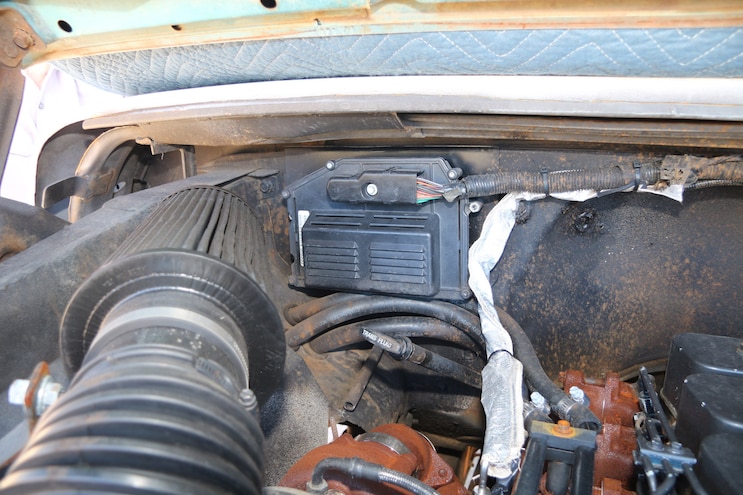 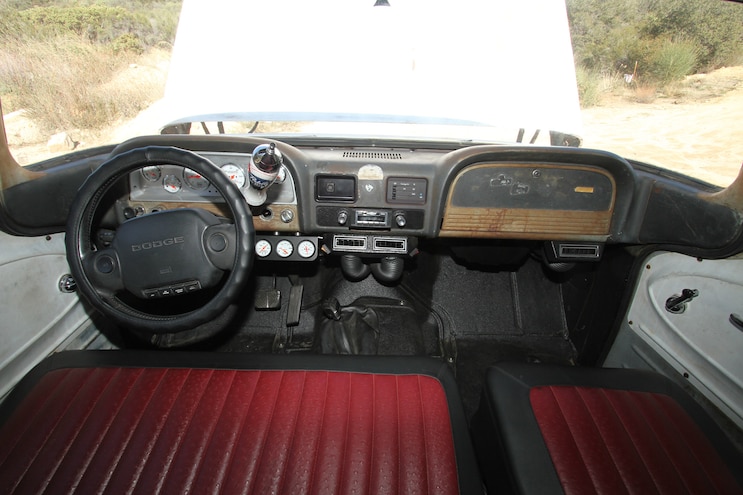 View Photo Gallery | 43 Photos
Photo 14/43   |   The interior sports a stock Dodge Ram steering wheel, Auto Meter gauges, and, if you look closely, you’ll also see the transfer-case shifter on the floor. The shifter required cutting the only hole in the floor of the entire drivetrain swap. 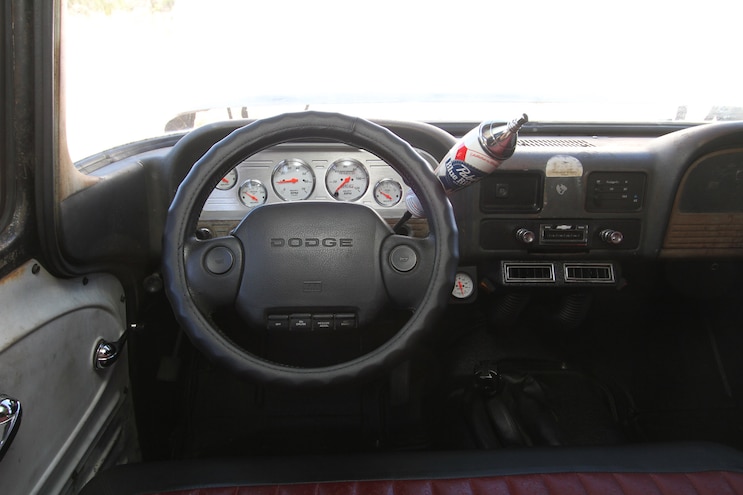 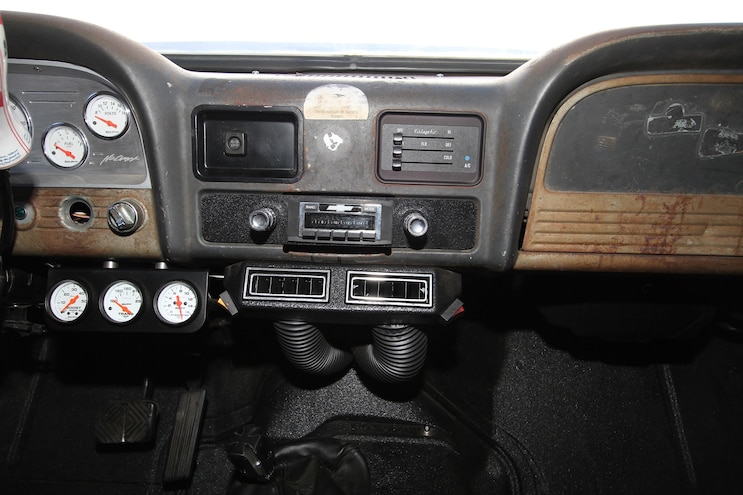 View Photo Gallery | 43 Photos
Photo 16/43   |   Air-conditioning was not available as an option for Suburbans back in 1960, and transistor radios were not introduced in the trucks until 1963. Vintage Air air-conditioning and an old-school-appearing radio are cool additions to Jake’s personalized panel. 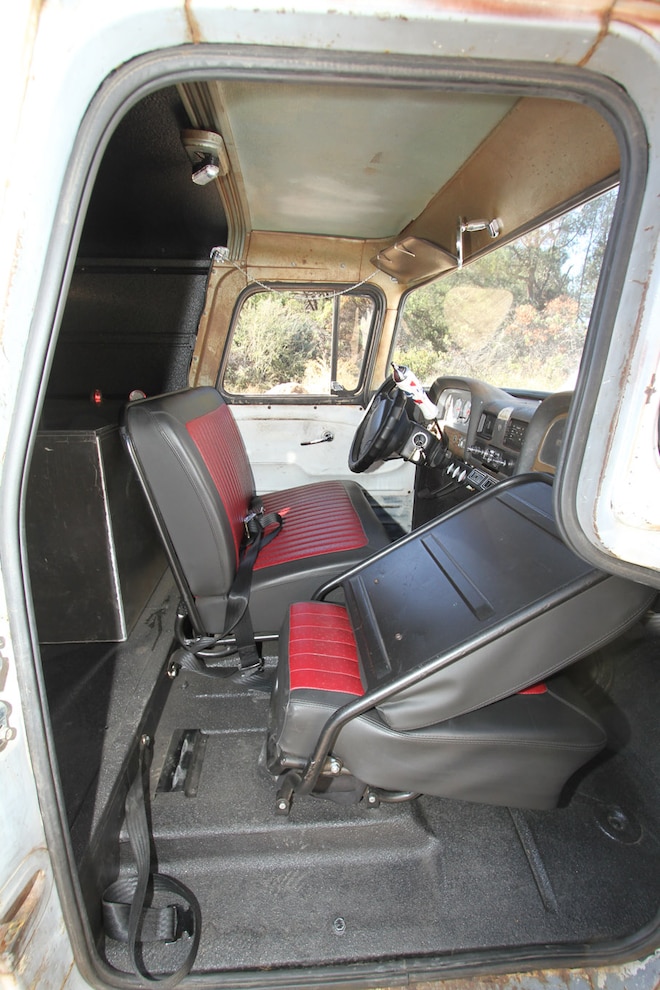 View Photo Gallery | 43 Photos
Photo 17/43   |   The stock 60/40 seats are upholstered with a vintage look but also with better padding for more comfort. The split seating allows access to the rear of the truck, directly from the passenger area. View Photo Gallery | 43 Photos
Photo 18/43   |   This Dana 70 rear axle is one tough unit and perfect for the manner in which this truck is used—on and off the pavement. 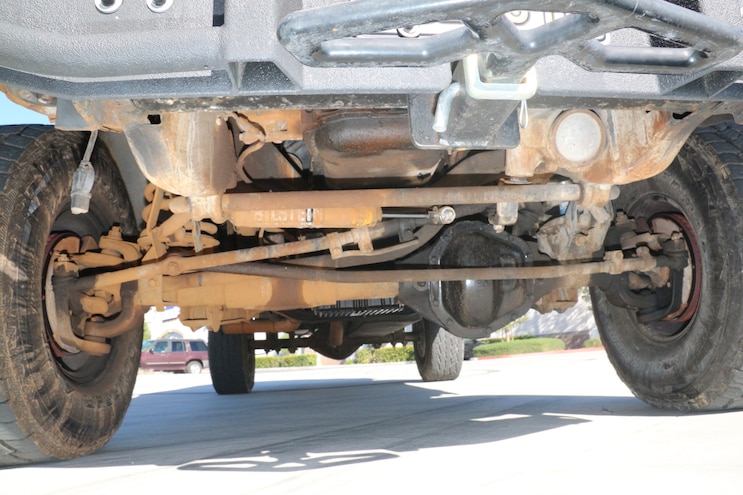 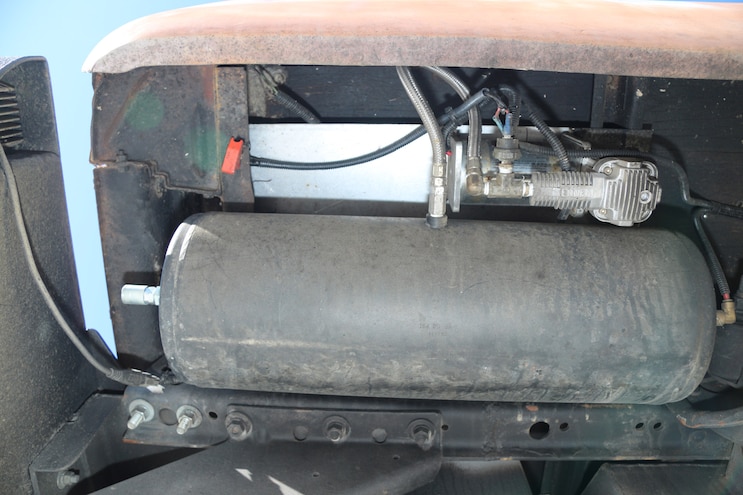 - OF
By Trent Riddle
3 Articles