Streaming Out of the Smog 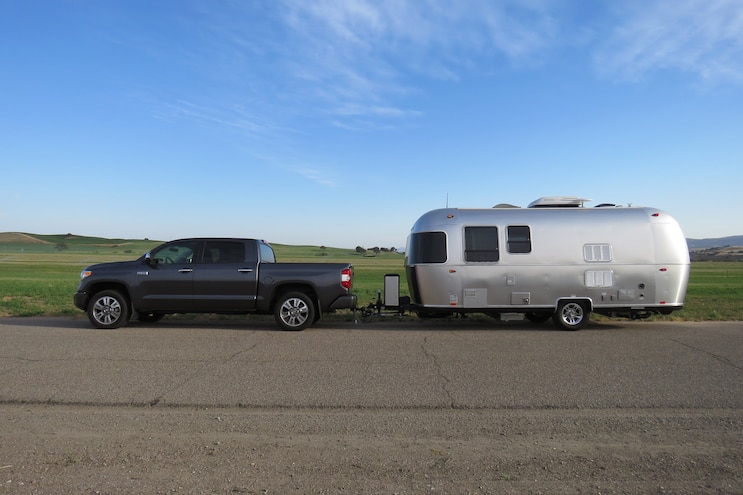 At times, Los Angeles can be a bit oppressive and claustrophobic, so with a long weekend on the horizon, we arranged to escape the urban confines of LA and explore the Napa Valley in Northern California. And with nowhere to stay once we got there, we spoke to our friends at Airstream, who suggested we tow one of their legendary “Bambi” models, a single-axle Sport 22FB, to lovely Petaluma for a weekend of comfortable, luxurious glamping.
Lisa and her team at Airstream Los Angeles introduced us to the Sport 22FB early Thursday morning. After a short walkthrough, we loaded picnic fixings into our new Yeti cooler, hooked up the Airstream and Equal-i-zer Sway Control Hitch to our ’17 Toyota Tundra Platinum, and hit the road, bound for the region’s crisp mornings, warm afternoons, and star-filled nights. Annoyingly, so did seemingly everyone else in LA. The six-hour trip ballooned to seven, then eight, then finally nine hours from door to door. However, once settled in at the San Francisco North/Petaluma KOA, our Airstream became a welcome respite from the traffic and stress of California’s Interstate 5 highway. 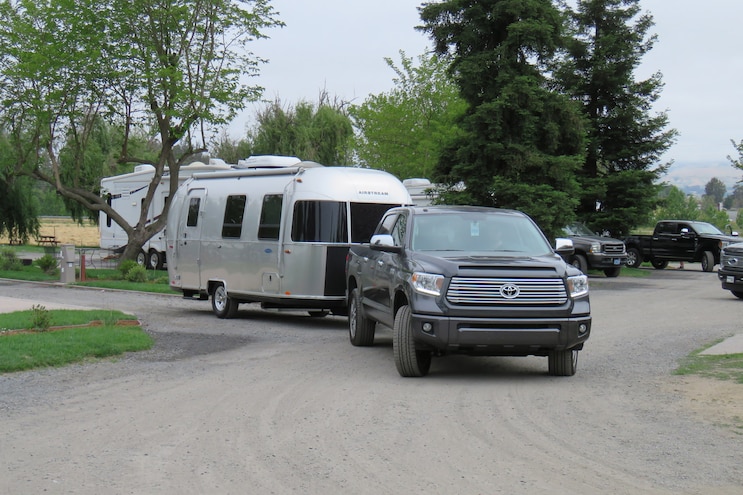 View Photo Gallery | 14 Photos
Photo 2/14   |   Slotting the 22-foot Airstream Sport 22FB into our pull-through camping space was easy, and the trailer avoided the jackknife tendencies that sometimes plague shorter wheelbases.
To say we slept soundly is an understatement. Airstream outfits the 22-foot variant of the Sport with a surprisingly comfortable double bed, mounted by the company’s signature wraparound bay windows up front. With the curtains drawn, the sleeping area couldn’t have been cozier or more private, and between the comfy front bed and the dinette-turned-twin bed, our travel companions had just enough space to stretch out and relax.
The next morning, we made good use of the Airstream’s propane stovetop, propane and electric refrigerator, and combination convection/microwave oven. As someone who is more accustomed to roasting cheap weenies over a smoky fire, the author took probably too much delight in how easy it was to whip up eggs, bacon, and French toast, and thanks to the onboard water tank with city water hookups, cleanup was similarly quick. This is something die-hard RVers have known for years, but we at Truck Trend aren’t used to such accouterment when camping. 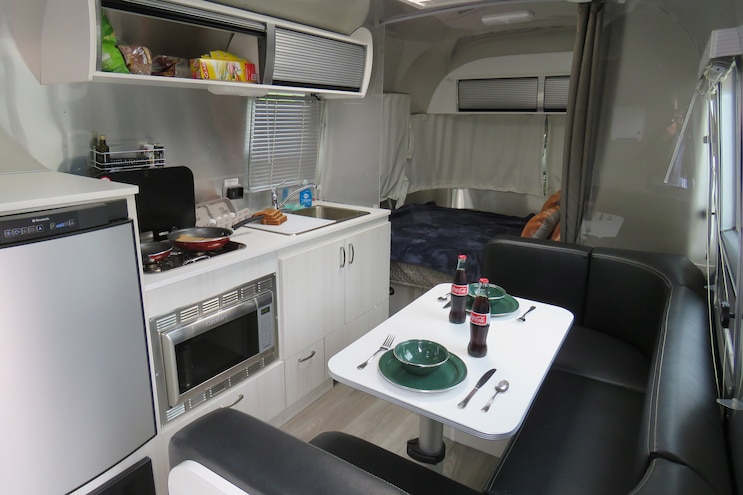 View Photo Gallery | 14 Photos
Photo 3/14   |   There are bachelor apartments in New York City with less space and fewer amenities. We made use of the cooktop frequently, and the refrigerator kept our Cokes cold all weekend.
Another unexpected surprise came with the piping-hot shower in the Sport 22FB’s dry bath. Seriously, we’ve had apartments with smaller bathrooms than the one in the Airstream. However, we were lucky that there were only two of us using the facilities, as we’d completely filled the gray-water tank in just two days. Mercifully, the KOA offered free black- and gray-water tank concierge service, allowing us RV greenhorns to keep our hands (and the environment) clean.
With full bellies, we locked up the Airstream and set off in the Tundra for a long day of music. Napa Valley is home to one of the most entertaining festivals in the U.S., called BottleRock. Its unique geographic location—downtown Napa—gives it a small-town feel, and although it attracts well-known musicians and rock groups, it’s just as focused on the great food and wine that make Napa famous. Once the morning fog broke and the sun shone through, our SoCal stress melted away, replaced with folk music, rock, jazz, and the best grilled-cheese sandwich on the planet. 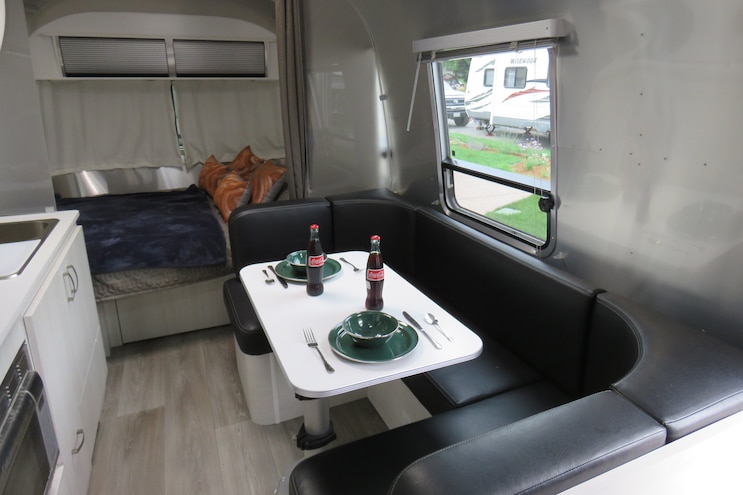 View Photo Gallery | 14 Photos
Photo 4/14   |   Up front is a comfortable, double-sized bed surrounded by bay windows with blackout shades. A curtain between the galley and the bedroom made for a cozy, private sleeping space.
After yet another cozy sleep in the Airstream (credit the onboard automatic thermostat, which cycled the propane furnace on and off throughout the night), we took the Tundra out the next day to Napa Valley yet again to do some hiking and hit the famous tourist spots. As per the usual for yours truly, the food was the most memorable part of the day, thanks to lunch at Redd Wood in Yountville (try the prosciutto crudo pizza) and dinner at Taylor’s Automatic Refresher, an outdoor roadside spot that serves a darned good burger, fries, and peanut butter milkshake. Our final day on the road saw us leave Petaluma and make our way slowly back to Los Angeles. Taking our time to get home, we stopped in Monterey and sampled both the city’s legendary seafood and the Airstream’s impressive maneuverability. We also took a detour through the central coast’s acres of farmland, replacing gas-station chips with orchard-fresh cherries as our road food of choice. 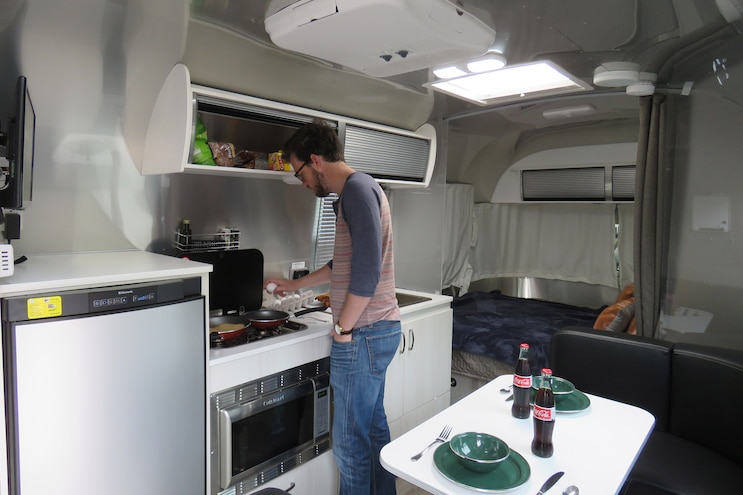 View Photo Gallery | 14 Photos
Photo 5/14   |   A carbon-monoxide alarm, smoke detector, and vented ceiling fan provide plenty of protection in case of a gas leak or improper stove operation. We never needed them, but we know of RVers whose lives have been saved by those safety features.
As our vacation time drew to a close, we were left with few complaints. The Bambi trailer had been used (and used hard) by journalists before us, so we weren’t too surprised that one of the cabinet doors had lost a hinge sometime before we took delivery. And in spite of the statewide 55-mph maximum speed limit while towing, road vibrations had caused the onboard fire extinguisher to pop off the interior paneling, leaving two unfortunate holes where the mounting screws had ripped out. Given our religious adherence to the speed limit, we hope it wasn’t poor driving that caused the damage. Aside from that, interior comfort and classy styling onboard the Sport were all first-rate. And we were delighted every time another Airstream family honked or waved as they passed by.
To be honest, even a long weekend wasn’t enough to get to know either the Airstream Sport or Napa Valley. Our trailer’s ample storage, fully equipped kitchen, comfortable sleeping quarters, and nimble proportions would never get old, and we were half-tempted to refuse to give it back at the end of the trip. And the great food, music, and accommodations of Napa Valley? We could definitely get used to that. 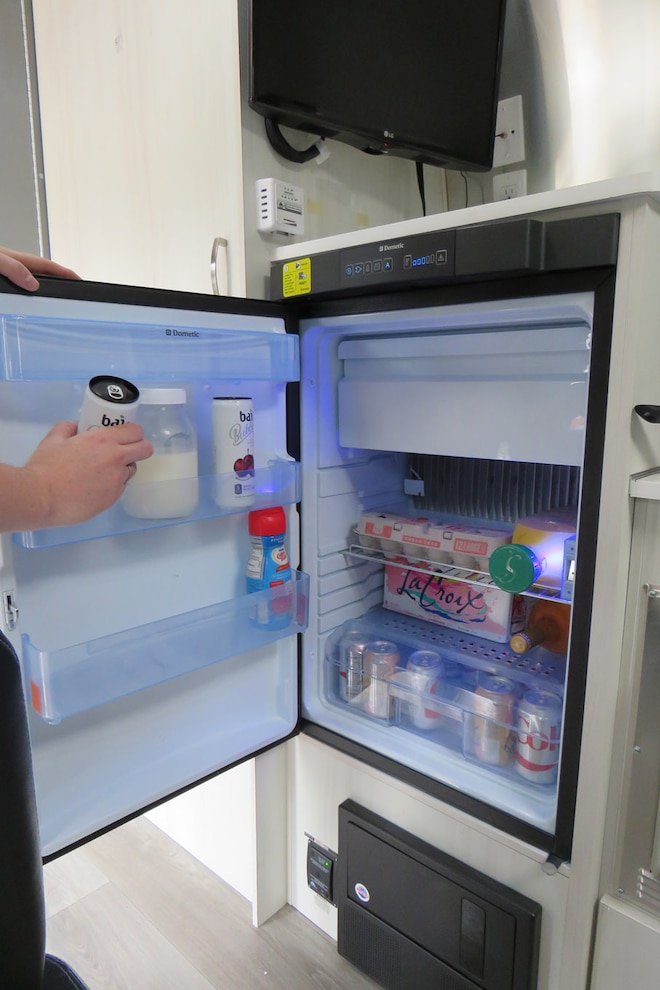 View Photo Gallery | 14 Photos
Photo 6/14   |   Our Airstream Sport 22FB included a Dometic propane/electric refrigerator standard. When left in “Auto,” it senses whether the trailer has been hooked up to shore power, saving propane. Then, when unplugged, it switches back to propane to keep refrigerator contents cold while dry camping. 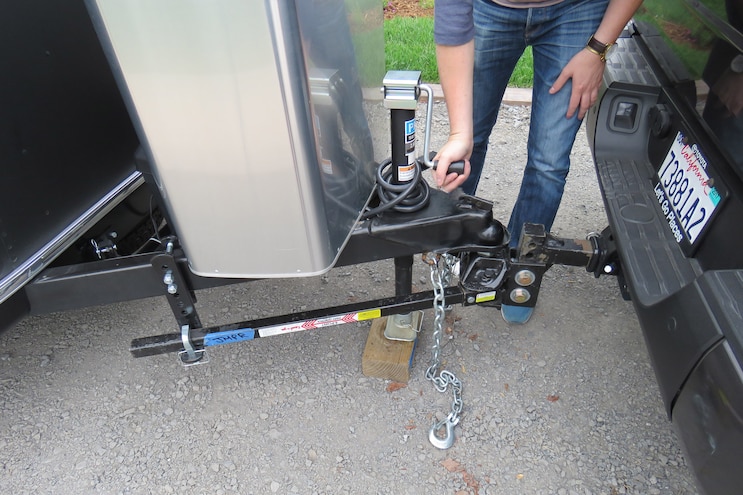 View Photo Gallery | 14 Photos
Photo 7/14   |   The Airstream towed straight and true, even at California’s towing-max speed limit of 55 mph. Part of the credit goes to this sway-controlling hitch, which should be a must-have for any bumper-pull trailer. 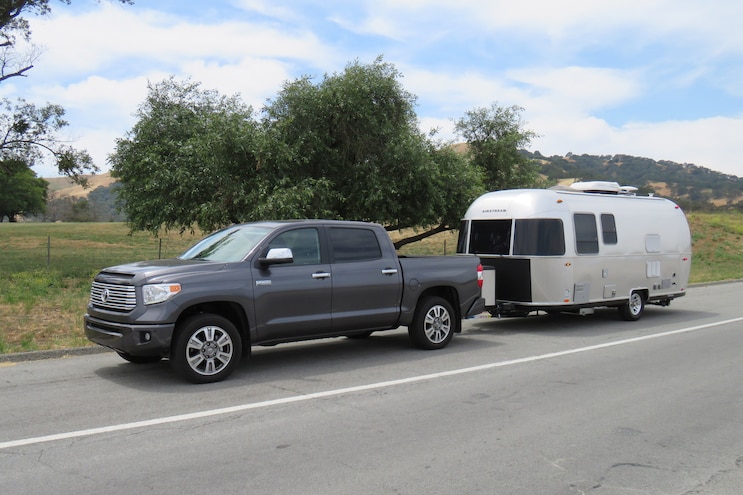 View Photo Gallery | 14 Photos
Photo 8/14   |   Our trip included a jaunt through the hills in Central California. Even on these winding, sometimes-narrow roads, the Tundra handled the trailer with total confidence. 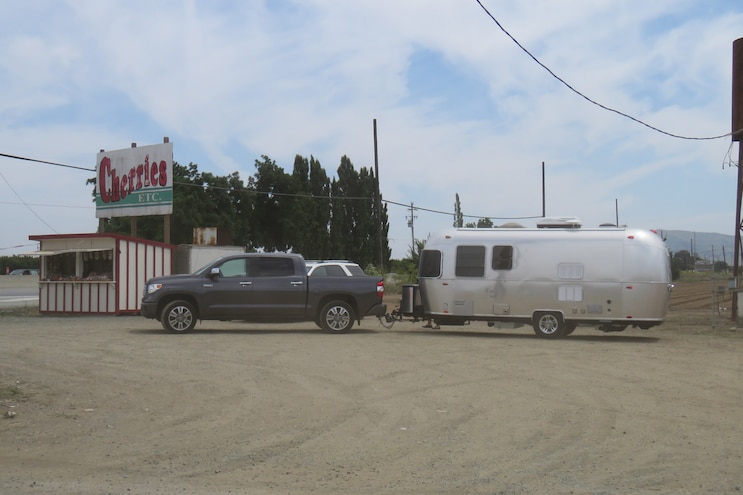 View Photo Gallery | 14 Photos
Photo 9/14   |   Part of the charm of a road trip is the opportunity to pull over and taste local fare. This orchard-adjacent cherry stand provided a perfect mid-afternoon snack. 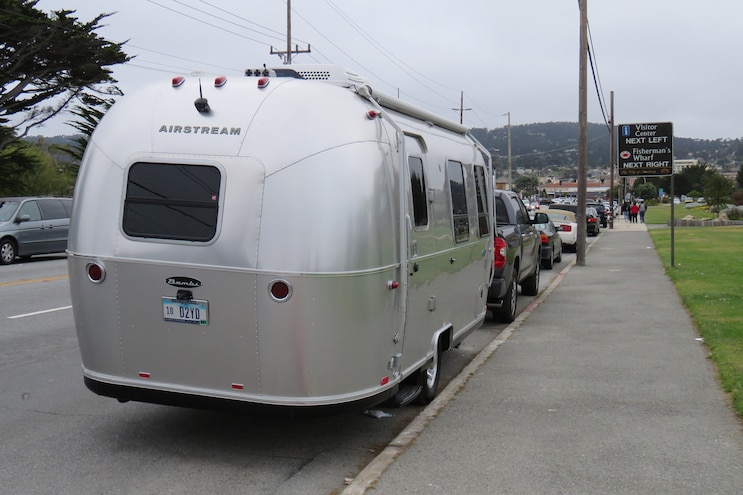 View Photo Gallery | 14 Photos
Photo 10/14   |   After leaving the campground, we tested the single-axle Airstream “Bambi” on Monterey’s narrow roads. The coastal town’s cozy and tourist-friendly charm was a perfect match for our quiet, relaxed road trip. 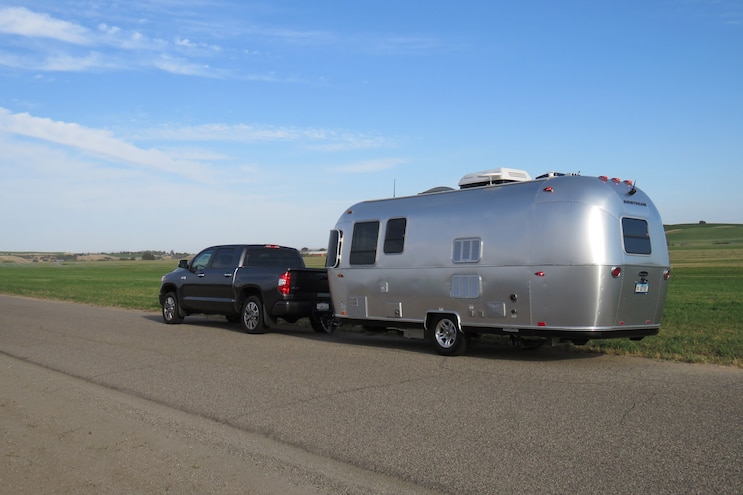 View Photo Gallery | 14 Photos
Photo 11/14   |   There might be nothing more iconic than a “silver bullet” Airstream travel trailer. Everyone, from seasoned camping veterans to 12-year-old kids, loves and idolizes the brand. After a weekend aboard one of Airstream’s entry-level models, we have to agree. 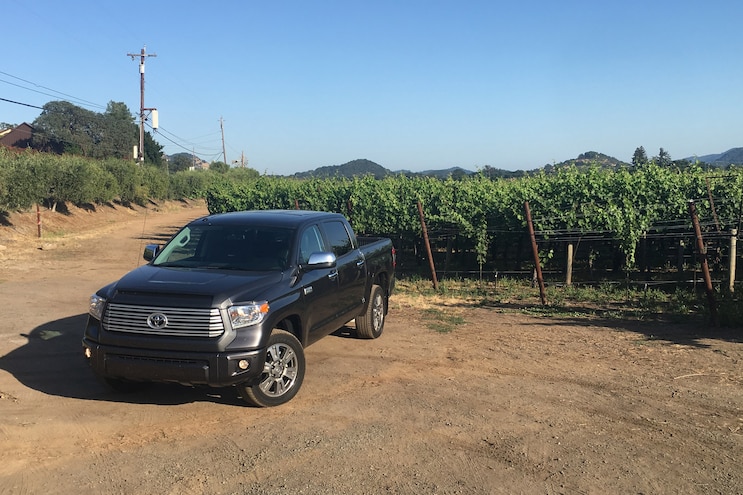 View Photo Gallery | 14 Photos
Photo 12/14   |   An employee for Riboli Family Wine Estates gave us this surprisingly up-close tour of the 100-year-old company’s vineyard near Napa. San Antonio Winery, Riboli’s parent company, is known for its high-quality, yet unpretentious libations, adjectives that apply to the Tundra Platinum as well.

Families and travelers have known since 1962 that KOA campgrounds are great places to call home while on the road. Our stay in Petaluma was no exception. Although we arrived after the office closed for the night, self-check-in was simple and easy to understand. The next morning, a representative from the campground stopped by to welcome us and make sure we were comfortable, highlighting the management’s attentive customer service. The campground also offered free black- and gray-water concierge service, a move that probably ends up saving them the trouble of cleaning up after some RV novice uses a dump station incorrectly (like we probably would have). 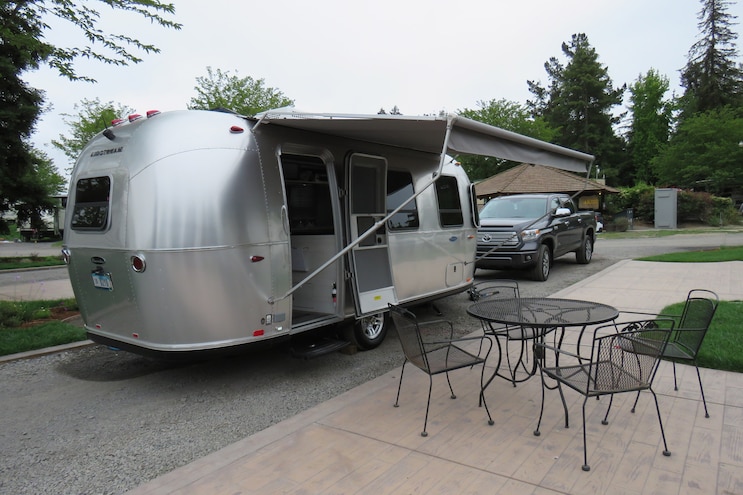 View Photo Gallery | 14 Photos
Photo 13/14   |   San Francisco North/Petaluma KOA
In addition, most of the camping spaces were outfitted with city water and electric lines, and our pad included a pleasant patio and nearby outdoor kitchen, which became a neighborly gathering place each evening. The campground also boasts a massive swimming pool, climbing wall, petting farm, playground, and hay-wagon ride-along, among many other amenities. That long list of family-friendly attractions is one key to KOA’s popularity and the reason that yellow sign is a common sight all across America.

There’s no denying it: the Toyota Tundra is one of the oldest designs on the market. But that doesn’t mean it doesn’t deserve consideration as a family vehicle and tow truck, particularly in loaded Platinum trim. Our top-spec tester had an as-tested price of $51,325 after destination and handling, and that price includes with Entune Premium JBL Audio with navigation, Bluetooth audio and phone functionality, heated and ventilated front seats, blind-spot monitoring, front and rear parking sensors, and a rearview camera, among many other creature comforts. There are few options on the Platinum, as just about everything comes standard. 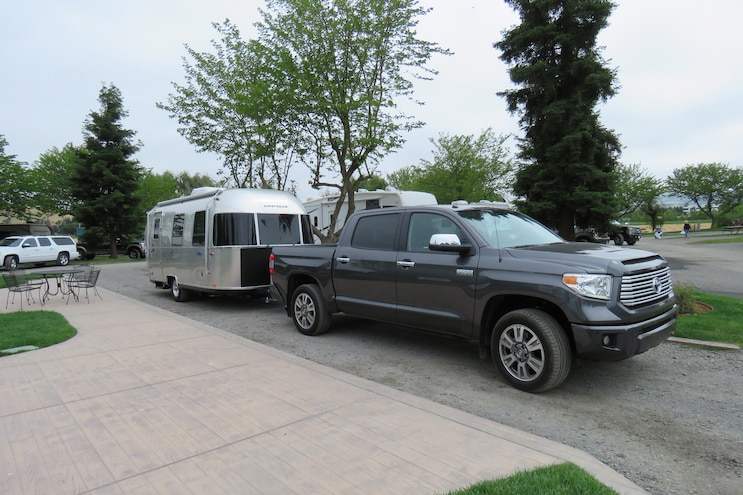 View Photo Gallery | 14 Photos
Photo 14/14   |   2017 Toyota Tundra Platinum
Towing the 3,634-pound Airstream Sport 22FB was a non-issue. The 22-foot trailer also exacted very little on the Tundra in the way of trailer sway, and rear axle sag was almost imperceptible. Even so, re-aiming the truck’s headlights to prevent blinding other drivers was simple, as Toyota fits the Tundra with a dash-mounted knob to adjust the lamps higher or lower as needed.
On the road and with the trailer in tow, the Tundra was quiet and smooth, and the i-Force V-8’s 381 horses were more than up to the task of hauling the trailer up the I-5 Grapevine in Southern California. Laden with a trailer or empty, the Tundra had brisk acceleration, and its engine emitted a pleasant growl when accelerating and an unobtrusive hum when cruising. Our only complaint was a lack of towing-related creature comforts found in the competition, features like automatic cruise control and blind-spot monitoring that takes the trailer’s length into account. The former, at least, will be standard on the ’18 Tundra, which features totally redesigned electrical architecture to allow for higher-tech features and entertainment content.
Overall, the Tundra was a great towing companion. Its subtle metallic paint and billet-style grille looked great in combination with the polished-aluminum Airstream. Toyota’s most charming ace is the Tundra’s rear window that retracts fully into the rear bulkhead, giving the cabin plenty of passive ventilation and alleviating the stale air and stuffiness that we all remember from childhood road trips. And the Tundra impersonated Toyota’s Avalon and Lexus’ ES sedans in terms of cabin quietness and freeway comfort, with spacious front and rear seats that left plenty of room to spare for each occupant.