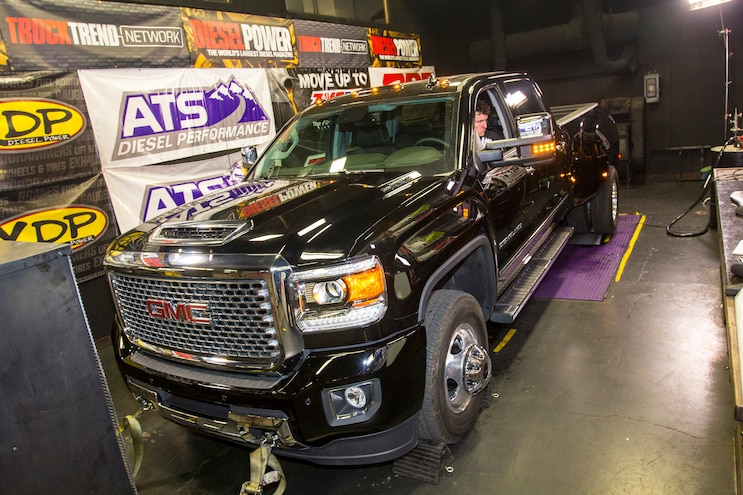 The first two tests of our six-event throwdown pitted our three factory-stock 1-ton duallies against ATS Diesel Performance’s vicious dual eddy-current Mustang dynamometer. Before getting down to the nitty gritty of just how much power these monsters put out, we first ran them through a fuel-economy evaluation utilizing the dyno and its powerful software. Similar to how the EPA does its fuel-economy testing, our evaluation began by strapping each truck to the dyno. We then topped off the fuel tank using a metered dispenser and set off on the 22-minute test. Over the course of a simulated 7.2 miles, the dyno is able to vary its load to simulate a diversity of terrain and driving conditions, and the vehicles run from stopped at idle all the way up to 60 mph. The system tells the driver what input is required by displaying a green arrow that must be kept between a pair of lines on a nearby monitor. Think of it as the most stressful, tedious video game you’ve ever played. Upon completion and before leaving the dyno cell, the trucks were again topped off using the metered pump, and the amount of fuel used was recorded. 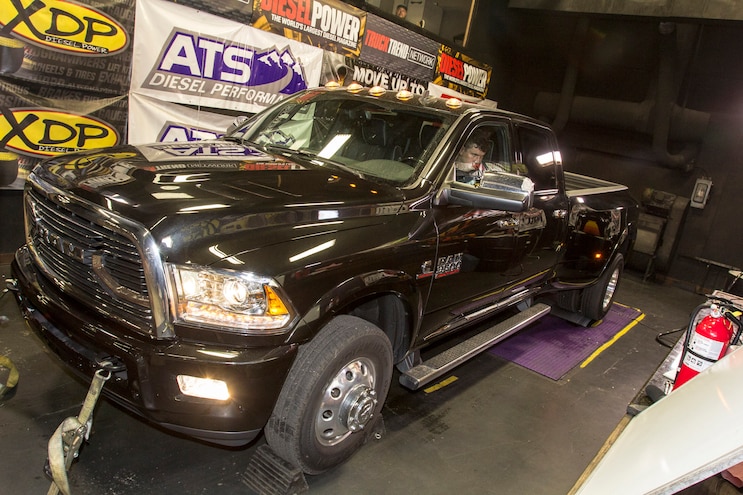 View Photo Gallery | 15 Photos
Photo 2/15   |   1 Ton Challenge Fuel Economy Dyno Ram
To eliminate the human factor as much as possible, we tapped the driving talent of ATS’s Maximillian Edwards, resident dyno guru and head of the company’s electronics shop. Max made it through the test with no faults, but a pair of anomalies on the first test led us to run all the trucks through a second time. During the first test, the Ford F-350 went into its exhaust-regeneration cycle, thus tanking its fuel-economy result and voiding the test. The second anomaly came when the GMC Sierra Denali 3500HD used a significant amount less fuel than the other two, leading us to wonder if we’d done something wrong. After a second run, the Sierra backed up its first number and took the win in our fuel-efficiency challenge by a wide margin. 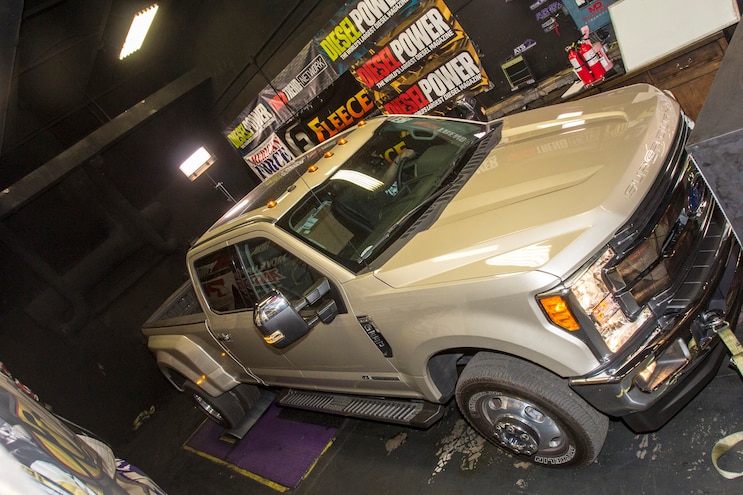 View Photo Gallery | 15 Photos
Photo 3/15   |   1 Ton Challenge Fuel Economy Dyno Ford
With the fuel-economy challenge in the books, we strapped the trucks back down for one more go at it, and this time it was all about power. We again enlisted the help of one of ATS’s resident experts to be the brains behind the wheel. Devin Dahlyn has been with ATS for more than a decade; he currently serves as manager for the company’s race shop and heads up research and development. As such, he’s logged more time behind the wheel of new trucks on dyno than anyone else, making him a perfect fit for our test. Devin ran each truck with the transmission locked in Fourth gear, which is closest to a direct-drive 1:1 ratio, and with a test window that sampled from 2,000 to 2,900 rpm.
For the sake of our competition, we used the uncorrected dyno numbers, meaning the power actually recorded at ATS’s 5,800-foot elevation. It’s worth noting that the power figures quoted by manufacturers are those tested at the flywheel, not the rear wheels. As such, it’s fair to assume that dyno numbers taken at the wheels should be about 20 percent less than these quoted numbers, once parasitic drivetrain loss is factored in. Each truck was given three pulls, with its highest horsepower and torque being recorded.
Unsurprisingly, all three of the competitor trucks put down power figures that were very closely matched, with only 30 hp separating first and third and less than a 26 lb-ft torque differential. In fact, only one combined unit separated the first- and second-place trucks.