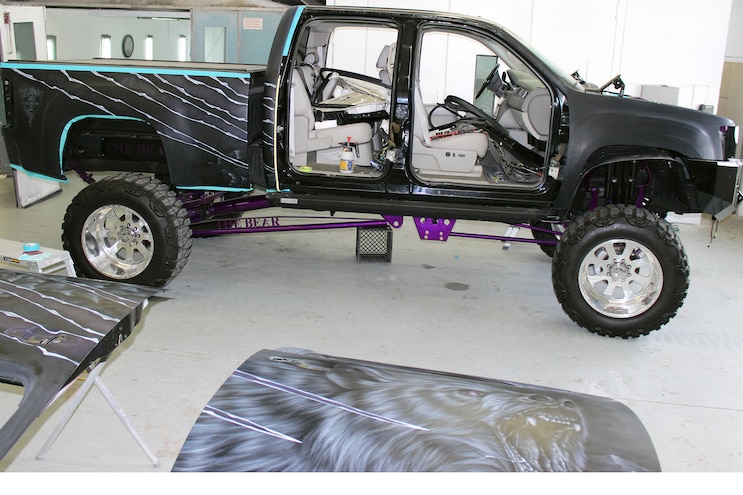 I met Trent through a mutual acquaintance who recommended I contact him for a potential project on a different truck he built, called the Polar Bear. After contacting Trent and asking him if he'd let me loose on the Polar Bear, he informed me that as cool as the Polar Bear was, I really needed to take a look at this other “little” project he was building, simply called The Bear Edition.
After a couple of minor tweaks, the aggressive grizzly bear and Rocky Mountains design phase was complete, and Trent made the two-hour drive from Calgary to Lethbridge, Alberta, Canada, to my good friends at J&S Collision, where Justin Bridgewater and Todd Oler were waiting to receive the beast and start on the teardown (disassembly) and prep stages (sanding of the existing paint work). Without the amazing help from both Justin and Todd at J&S, this project would not have happened!
The entire surface was sanded with 800-grit sandpaper to ensure a good adhesion between my airbrush paint and the truck’s existing paintjob. It also ensures the clearcoat will bite properly and adhere to the surface correctly. This is what gives the truck its dull appearance at the conclusion of the sanding stage, as the truck’s original shiny finish is removed, and the new and improved face-lift gets started!
I painted the design according to the layouts I created based on Trent’s input as well as my artistic license. As part of that fun, I incorporated multiple “rip” effects, starting on the back end of the truck and working my way toward the front of the box and into the cab area of the body sides. This effect was masked off using pre-cut “rips” I designed and cut on a vinyl plotter using Avery white paint mask vinyl—an major time-saving method used by many airbrush artists in the industry.

View Photo Gallery | 2 Photos
Photo 2/2   |   MOB Airbrush Cover Truck Moment
Once the rips were masked off on both sides, the entire airbrushed design was applied to the truck 100-percent freehand with no stencils or masking of any kind. An overhead projector was used on the side designs to ensure the correct size and that the proportions were equal on both sides of the truck. Once the outline of the shapes was rendered with my airbrush using only House of Kolor white basecoat, the projector was turned off and the real fun began.
It was agreed the emphasis be on the features and details of the bear image, so the mountain effects were purposely done in a way that, although visible, they are subtle and ‘transition fade’ in from the fur of the bear image onto the backdoors on each side of the truck. If you look close, you'll see the snowy details of the mountains.
The vast majority of the airbrush time was spent on the bear images themselves, to really capture the beast-like qualities of the truck. After about 20 hours, the bear images were complete, right down to the saliva whipping off its teeth. The eyes of the bear images were done in purple pearl to match the various purple pearl components. The hood and tailgate images were done much in the same way, and the same painstaking process was used on the hood to give the bear its ferocious look and life-like fur and features. Extra attention was given to the teeth and eyes to really capture the aggressive side of the grizzly bear we were trying to emulate.
The shine you see after the artwork is completed is from the application of the Matrix clearcoat, masterfully applied by Justin and Todd at J&S Collision. With the help of a high-heat bake cycle in the paint booth at J&S Collision, the cure time is dramatically accelerated, from a couple of weeks for a full cure to less than a week. This also helps to decrease the amount of time waiting to reassemble the truck, as the paint hardens faster and can therefore be handled much sooner than just letting the finish air-dry only.
Other add-ons included a fully airbrushed tonneau cover for the truck featuring another grizzly bear image, this time done with the help of Rob DiVita of DiVita Auto Design in Calgary, and Joel Cannon with Collision Solutions in Okotoks, Alberta. We also custom-painted and airbrushed the newly designed and fabricated torsion bars for the truck’s suspension and the custom-made grille.
It took approximately 100 hours of artwork and airbrush time, and another week of teardown, prep, and reassembly by the boys at J&S Collision—not to mention the hours Rob DiVita put into the paint and clearcoat work on the tonneau cover and suspension parts. Seriously, a very special thank you goes out to Justin Bridgewater, Todd Oler, Rob DiVita, and Joel Cannon. This project didn't happen in such an efficient and professional manner without you guys!!