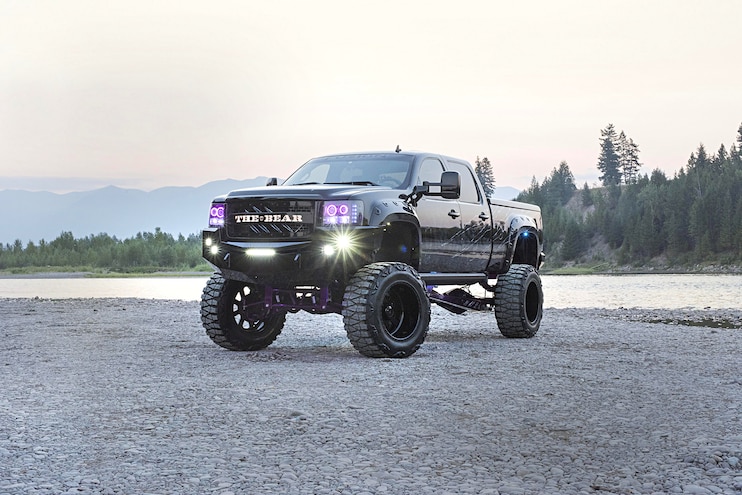 You’ve got the brown bear, the polar bear, the Asian black bear, the American black bear, the sun bear, the sloth bear, the spectacled bear, and, last but not least, the giant panda. Formidable animals indeed, bears stand intimidatingly on their hind feet and can climb, tear, and catch with the upmost finesse using their massive nonretractable claws and acute sense of smell. They are mostly solitary (minus the whole mom and cub thing) and prefer keeping their territory clear of competition and neutralizing anything that threatens their dominance over shooting the breeze at the local berry tree. 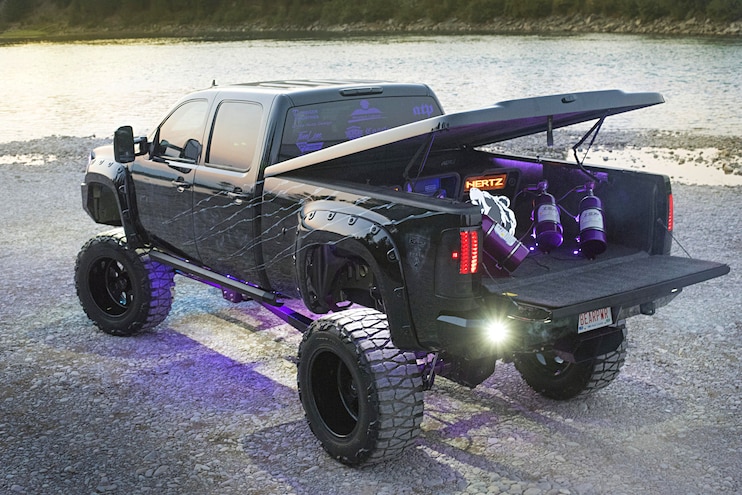 View Photo Gallery | 92 Photos
Photo 2/92   |   Bear Edition 2007 GMC Sierra 2500HD Rear
Well, there’s a new bear in town, and it comes in the form of the mechanically beautiful 1,236hp ’07½ GMC Sierra 2500HD owned by Trent Clark of Calgary, Alberta, Canada—and it just might be the fiercest animal yet. It’s advisable for rivals to just collapse and play dead, because there’s no fighting back, defending against, or outrunning this beast. Trent’s truck really is the alpha truck, epitomizing a machine that basically rules in the areas that count most: performance and looks. 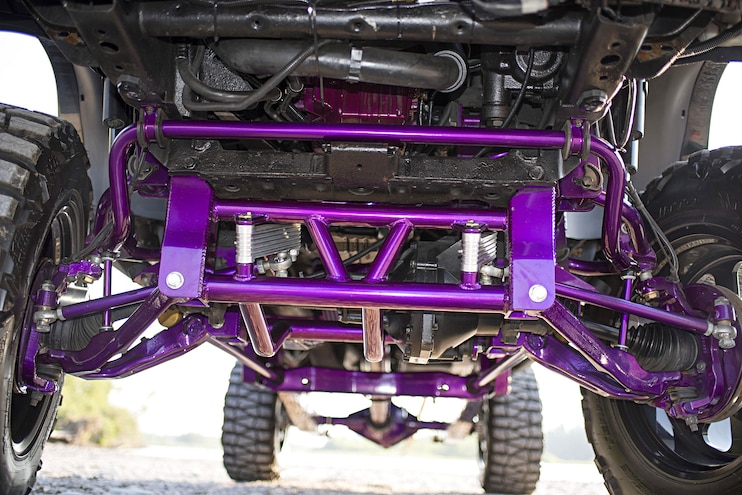 View Photo Gallery | 92 Photos
Photo 3/92   |   Bear Edition 2007 GMC Sierra 2500HD
We know the story all too well, and what was supposed to be a moderate build escalated into a legit eight-year investment in time, money, resources, and patience. Like so many other truck enthusiasts, Trent is in the construction industry and needed a truck capable of pulling a trailer. He assumed the lease of the perfectly stock 2500HD in 2009 from a friend who opted for a BMW, with the intention of a simple tune for slightly better performance. Like most of us who can’t just leave our trucks alone, he soon wanted a slightly more aggressive look and selected a 6-inch lift, custom wheels, bigger tires, and fender flares. The terminal disease for more power flared up again, resulting in a second turbo, head studs, and a mild ATS transmission, followed up by an Edge monitor, straight-pipe exhaust, SSBC brakes, and 100-percent-over injectors. 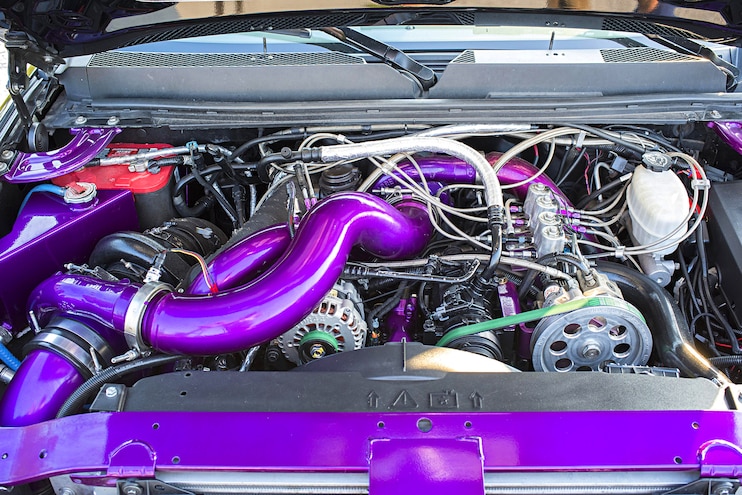 View Photo Gallery | 92 Photos
Photo 4/92   |   Bear Edition 2007 GMC Sierra 2500HD Engine
When the engine kicked the proverbial bucket, a SoCal Diesel–built Duramax was quick to fill the void. It seemed fit to handle more air and fuel, so mods including a triple-turbo setup, two-stage NOS system, and 150-gph FASS system were installed. Since more is not always better and the triple turbos turned out to be quite underwhelming, Trent sent the sick truck to the doctor: Rob Coddens (“Idaho Rob”) of Adrenaline Truck Performance in Meridian, Idaho. The triple-turbo setup was kicked to the curb in favor of a new compound-turbo setup consisting of 106mm and 68mm Garrett ball bearing turbos. Focusing on the looks side of the equation, Trent chose to up the ante again with a powdercoated 8-inch Bulletproof Diesel lift kit, American Force wheels, Nitto tires, fabricated step sides, a partial exterior wrap, and a complete Hertz audio system.
Boom went the engine, yet again; it’s a vicious cycle, indeed. Enter Curtis Halvorson of Extreme Engine Development in Calgary, enlisted by Trent to further outfit the truck’s SoCal Duramax with higher-horsepower performance parts. Trent promptly managed to thrash up the ATS-built transmission, which was evidently the newest weakest link. Billet input, output, and intermediate shafts and a billet flywheel helped remedy the transmission ails, while an oversized spring and Stage 6 PPE Clutch Pack made for one robust transmission—which Trent managed to pulverize. And again after that. Finally, Commercial Powertrain came to the rescue with its 2,000hp warranty and custom clutch kit and valvebody. 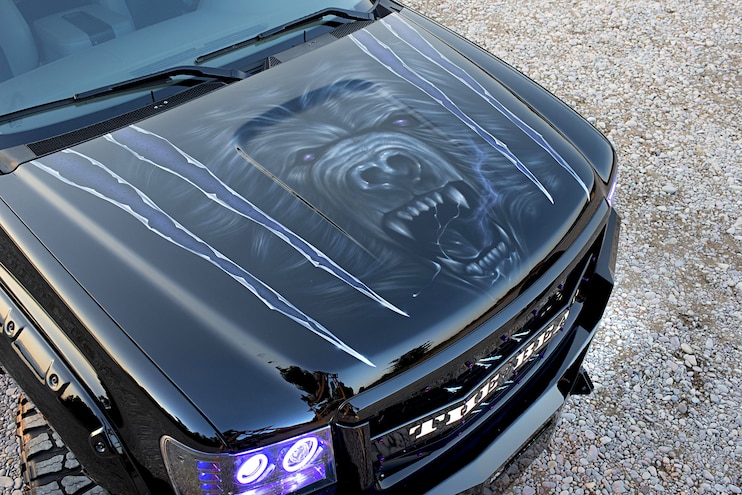 View Photo Gallery | 92 Photos
Photo 5/92   |   Bear Edition 2007 GMC Sierra 2500HD Hood
The proverbial smoke was just clearing from the nasty burnout produced by the Duramax’s fresh performance engine build and super wah-zoo transmission when disaster struck again: a rowdy injector resulted in yet another cracked engine block and a broken crankshaft. Curtis Halvorson upped the game by stuffing high-performance internals into the LMM’s rebellious and ravenous belly. Fueling upgrades included custom Dynomite Diesel Products (DDP) 275-percent-over injectors and a 12mm Exergy fuel injection pump to replace one of the stock CP3 units.
With the engine carnage finally over (knock on hood), Trent could return to the “show truck” aspect: custom airbrushing by longtime 8-Lug friend Mike O’Brien at MOB Airbrush (remember the column we used to run called MOB Scene?), a 12-inch Bulletproof Suspension lift, a custom audio enclosure in the bed, and many interior upgrades, which you can check out in the SpecSheet. 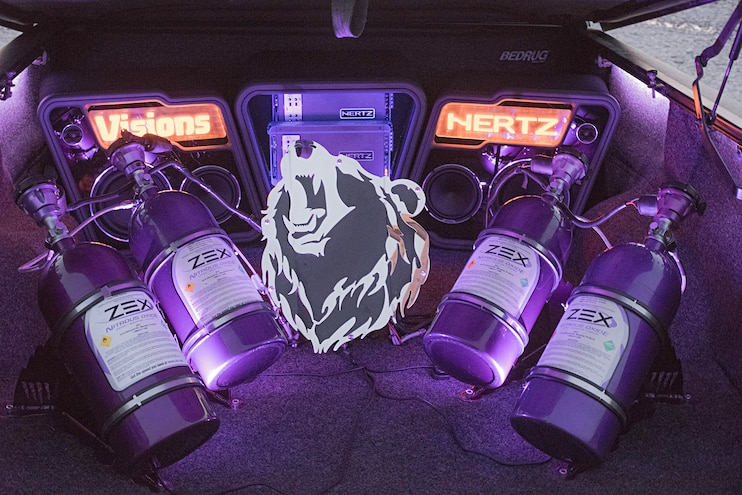 View Photo Gallery | 92 Photos
Photo 6/92   |   Bear Edition 2007 GMC Sierra 2500HD Bed
Trent uses the truck for client promotions, taking it to corporate events as appropriate. In addition to its regular duties, it’ll be seen at some dyno competitions and also a variety of shows across North America. Hopefully, Trent can enjoy his show-’n’-go (his two favorite parts of the truck) concoction without too much more heartache, hitting high power numbers and hauling copious show trophies.

- OF
By Monica Gonderman
635 Articles